With over 38 venues in Phoenix/Scottsdale, there are many places to choose from whether you're looking for a crazy night out or a lounge atmosphere. Don't worry! We're going to list out the best clubs in Old Town Scottsdale, Phoenix/Scottsdale that you should definitely check out.

Riot House is a South Beach themed nightclub where sophistication meets excitement. The 12,000 square feet versatile space features a large center bar, well-balanced sidebar, a large dance floor, multiple private booths where guests can arrange for bottle service, an amazing tropical themed menu, and the best Audio Visual system in the state. Its opulent modern design is visible throughout the venue from the dynamic use of gold, marble, and sandalwood. At Riot House, guests are able to enjoy all types of entertainment and enjoyment, the venue hosts brunch as well as football watch parties every weekend during the season with game day food/drink specials. Open Thursday through Sunday, they have 4 nights of exhilarating nightlife for all types of party goers to enjoy. Come find out why they love to say, “Let’s Start a Riot!” at this amazing venue.

The Bottled Blonde is the casual hybrid between restaurant and nightclub. Located in the heart of Old Town Scottsdale’s bustling Entertainment District, guests will be able to enjoy the best pizza and beer in town. The 7,500 square foot space takes the al fresco concept to the next level and plays the rustic beauty of the restaurant up until it looks like it was meant to be the scene of the best nightlife in the area. By combining aspects of the classic Italian kitchen, German beer garden, and East Coast brewery, the Bottled Blonde is able to offer to its customers a space that feels distinctly American and communal with the blending of cultures. After the kitchen closes after dinner, the venue transforms into a full fledged, high energy club party with bottle service and live DJs spinning. Whether you’re there because you want to enjoy some grub and have a relaxing evening or you want to get drunk and let loose on the dance floor, the Bottled Blonde is there to make all your dreams a reality.

Dierks Bentley’s Whiskey Row is an American Gastropub unlike any other. This one of a kind restaurant, bar, and nightclub stands out with its award-winning food/drinks, exhilarating nightlife, and a rock n roll vibe inspired by Dierks himself, in their jam packed space. With a 360° stage and a huge 24 ft TV to watch all of the sporting events and entertainment around, guests will never have a second to feel bored in this intense and lively venue. Whiskey Row is also one of the most high-tech bars in Arizona. Their iPad technology system keeps tabs on managing the audio and video system from anywhere in the room, which allows them to provide their guests with truly stellar music and performances to get down to. The atmosphere of Whiskey Row is tailored to meet patron’s every need, from a highly trained and welcoming staff that rush to provide guests with amazing drinks and service, to a pumping playlist that keeps playing all not long, to the phone charging stations at the bar, at Whiskey Row you’ll find everything to have the ultimate clubbing experience.

El Hefe Super Macho Taqueria is not your typical taco joint in Scottsdale, Arizona. While most folks are spending Sunday evening winding down, the party is just getting going at the popular Mexican themed restaurant and nightclub. The place has a relatively relaxed, easy environment, making it a perfect spot to grab a bite and some drinks with friends featuring dishes made up of delicious tortillas and some of the best tacos in town as well as beer-garitas throughout the day. After darkness falls, the atmosphere morphs into an electric dance party fueled by strong drinks and great music that provides endless entertainment throughout the night. Every weekend, the “super macho taqueria” and nightspot serves up its 4-2-10 Sunday party, which features a large variety of drinks, great music, and endless dancing. The in-house DJ spins a lively mix of Top 40’s, hip-hop, and electro-house hits every night that will have guests get up from their table or booth to go join the party on the dance floor. 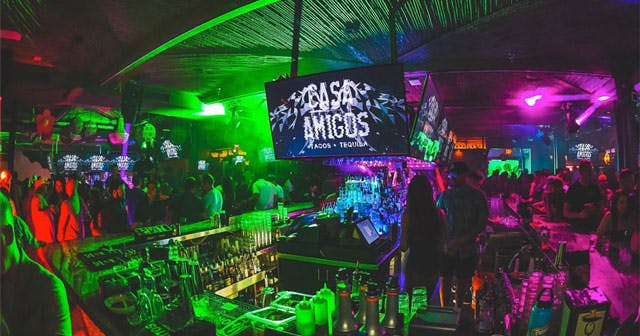 The latest creation from the nightlife development company Evening Entertainment Group, Hi Fi is a music focused, retro inspired club that is open well into the night with a creative and extensive menu of cocktails, boozy milkshakes, and classic American food. The massive structure of Hi Fi juxtaposes old school rock n’ roll theme art and accents with advanced audio/visual components to create a space that is both modern and rustic. Two centerpiece design features dominate the visuals: a vintage speaker wall erected with wood-framed speakers and throwback black and white televisions, giving way to the showstopper – a digital graffiti wall that will project an ever-evolving array of 3D images that will morph the mood throughout the night. Hi Fi has dual spaces for guests that are both inside and outdoors which are separated by glass garage doors. The outdoor patio features a 360° island bar, an elevated lounge-style seating area, plus two community tables, outdoor high-tops, and resort-style lounge furniture.

Three Wisemen is the brainchild behind Scottsdale business owners Gem Ray and Bunti Singh, who set out to create something that stands out among the rest of the lively Entertainment District of Old Town Scottsdale. “We love the energy and the dynamics of Old Town Scottsdale,” said owner Gem Ray who went on to say their goal was to bring “a new concept for all patrons to have something a little different in the Entertainment District.” Located south of Maya Day + Nightclub next to Joe’s New York Pizza, the spot not only serves as a bar but it also serves up feel-good comfort foods like tamales, elotes, gyros, and turkey legs. Ray recommends ordering the turkey burger and chips. Designed by several of the bar’s teams members, the interiors feature walls with a weaved-like structure, low lighting, a central bar, TVs and more, perfect for kicking back and sipping on some whiskey.

A sports bar with games (darts, shuffleboard, giant Jenga, etc) during the day that also converts to a bustling nightclub at night. Bevvy has a much more laid-back feel than more upscale nightlife venues.

Paris of Scottsdale brings a sexy Latin edge to the Scottsdale dance club scene. The club frequently hosts popular DJs from around the country and the international EDM scene. The music pouring out of the speakers is eclectic, but the club has been known for its emphasis on hip hop, reggaeton, salsa and other Latin-infused beats. Bottle service and the VIP treatment is available. But even if you don’t pay for the VIP treatment, the Paris bar staff is fast and nimble, so lines move faster than expected during prime time at this busy club. Come dressed to impress – this is Scottsdale after all!

There are many other clubs available in Old Town Scottsdale, Phoenix/Scottsdale like Wet Deck, Pretty Please, The District, The Saguaro Pool

What is the dress code like at Phoenix/Scottsdale nightclubs?

How can I get into Phoenix/Scottsdale nightclubs for free?

Some Phoenix/Scottsdale nightclubs have a free ladies guest list, and have a free even ratio guest list – free if you have the same number of girls (or more) in your party.

Keep in mind that many Phoenix/Scottsdale nightclubs are more exclusive and require bottle service to get in. You can sign up for the guest list on our events page.

How can I book bottle service for Phoenix/Scottsdale nightclubs?

Bottle service and table minimums at nightclubs can get pretty expensive in Phoenix/Scottsdale, but every nightclub is different.

Should I buy tickets to get into Phoenix/Scottsdale nightclubs?

Many nightclubs in Phoenix/Scottsdale are bottle service only – meaning you must book a table reservation in order to get inside.