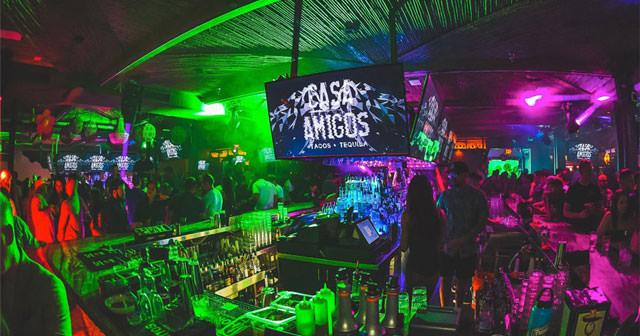 Creativity abounds on both floors of this bi-level nightclub located in downtown Phoenix. Dance the night away on the open rooftop or inside in the main room. Always bringing in the best of house and hip-hop artists including Paul Wall, Talib Kweli, Louie Vega, Marques Wyatt and many more.

RSVP at The Pressroom

Pretty Please was created in just two weeks after Lion Craft led the charge to remodel the entire space before opening day. The result was a beautiful, flirty and fun nightlife hotspot where guests could not only enjoy themselves but take plenty of pictures they would want to post later. Decorated with rich dark woods, mirrors, and lush fabrics, Pretty Please offers a uniquely sensual yet playful ambiance that's perfect for the sophisticated partier. At Pretty Please, guests are welcome to enjoy themselves in the seductively mysteriously seductive lounge which features a full bar, music from world-class DJs, VIP bottle service, and the best cocktails in Old Town Scottsdale. The eight spacious and luxurious VIP booths within their stunning venue drips with opulence and style and offers an elevated experience for patrons. Their uniquely sensual ambience mixed with bottle service and trapeze entertainers will always leave you wanting more. Enjoy a hand-crafted cocktail on one of their special hydraulic booths or out on the spacious dance floor. The night is yours.

Check out the venues section for the full list of Rap / Hip-Hop nightclubs.

What is the dress code like at Phoenix/Scottsdale Rap / Hip-Hop nightclubs?

How can I get into Phoenix/Scottsdale Rap / Hip-Hop nightclubs for free?

Some Phoenix/Scottsdale Rap / Hip-Hop nightclubs have a free ladies guest list, and have a free even ratio guest list – free if you have the same number of girls (or more) in your party.

Keep in mind that many Phoenix/Scottsdale Rap / Hip-Hop nightclubs are more exclusive and require bottle service to get in. You can sign up for the guest list on our events page.

How can I book bottle service for Phoenix/Scottsdale Rap / Hip-Hop nightclubs?

Bottle service and table minimums at Rap / Hip-Hop nightclubs can get pretty expensive in Phoenix/Scottsdale, but every nightclub is different.

Should I buy tickets to get into Phoenix/Scottsdale Rap / Hip-Hop nightclubs?

Many Rap / Hip-Hop nightclubs in Phoenix/Scottsdale are bottle service only – meaning you must book a table reservation in order to get inside.