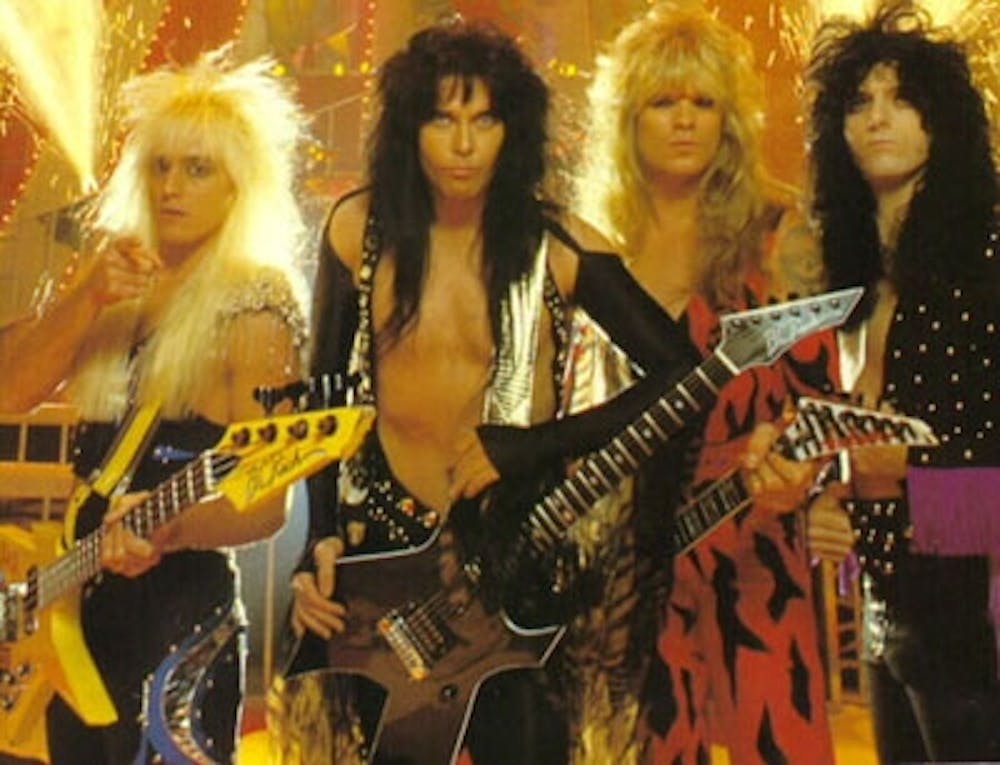 Follow W.a.s.p. to get alerts about upcoming events and special deals!

There has been much speculation over the origin of the bands name, and if it stands for anything, since it is written as an acronym.

Without further ado, here are W.a.s.p. top 10 tracks of all time:

1. I Wanna Be Somebody

Alternatively, some people believe the initials W.A.S.P. stand for "We Are So Perfect" or even "We Are So Powerful". Another possible abbreviation is "White Anglo-Saxon Protestants", being the original meaning of the acronym. However, this is unlikely considering the fact that Blackie Lawless' mother is part Native American.It could be ironic, seeing as songs like "Animal (Fuck Like a Beast)" hardly fit into the usual picture of White Anglo-Saxon Protestantism. It has also been rumored that their name is an acronym for "We Are Satan's People" or even "We Are Satan's Preachers". When asked about the band's name, Lawless has avoided giving a straight answer; in one interview he answered "We ain't sure, pal".

Read an interview a long time ago where blackie also says that w.a.s.p. means : what an superb performance.

Blackie Lawless has told another story on how W.A.S.P. got their name. He said he and a friend were walking in the backyard and saw a wasp nest on the ground under a tree and decided to call the band WASP. The band later decided to add a period between each letter to make it stand out more when people saw it. A former member, Rik Fox has stated that he was the "friend" that coined the name WASP.

The original lineup of W.A.S.P. was formed in Los Angeles, California in 1982 by Blackie Lawless, Rik Fox, Randy Piper and Tony Richards. The band became notorious for its raunchy and, at times, shocking live shows. Lawless was known to tie semi-naked models to a torture rack, and to also hurl raw meat into the audience. The band's debut single, entitled Animal (Fuck Like a Beast), and its cover were equally controversial.

The first lineup didn't last for long, as Rik Fox was let go and went on to join the band Steeler with (then unknown) vocalist Ron Keel and guitarist Yngwie Malmsteen. He was replaced by Don Costa. Shortly afterward, Don Costa also left the band and his position on the bass was filled by Lawless. At the same time, guitarist Chris Holmes joined the band.

W.A.S.P. signed to Capitol Records for their debut album, W.A.S.P., released on August 17, 1984. The debut was at one time planned for release with the title Winged Assassins. The band's first single "Animal (Fuck Like a Beast)" was omitted from the album in the United States to prevent it from being banned from major chain stores.

"L.O.V.E. Machine" and "I Wanna Be Somebody" helped the album sell, and set the band up for "Blind in Texas", a song written in St. Paul, Minnesota, by Blackie Lawless. The song was released on their next album The Last Command on November 9, 1985. The Last Command is still W.A.S.P.'s highest charting album, peaking at #47 on the Billboard album chart. "Blind in Texas" is perhaps their best known song, more than 20 years later. The Last Command was also the first album with new drummer Steve Riley. The former Keel drummer replaced Tony Richards at the beginning of the 1984-85 tour.

After The Last Command tour, guitarist Randy Piper quit the band. He auditioned for a spot in Alice Cooper's band and was accepted, but left after only a few weeks because Kane Roberts was to be the lead guitarist in the group, whereas Piper was not content with staying in the background. Former King Kobra bassist Johnny Rod joined W.A.S.P. as Lawless went back to playing rhythm guitar.

With the lineup changes made, they recorded their third album, titled Inside the Electric Circus. It was released on November 8, 1986. The album was a big hit with W.A.S.P. fans. Critics, on the other hand, dismissed it as "7th-grader rock".[citation needed] Songs like "Shoot from the Hip" and the minor hit single "9.5.-N.A.S.T.Y." helped the band live up to the reputation of one of the possible meanings of their band name, "We Are Sexual Perverts". However, Blackie Lawless himself, known to be a harsh critic of his own work, cited in the albums re-release liner notes that Inside the Electric Circus was "[a] tired record by a tired band". Ultimately it was an unfavorable critical review of the single "9.5.-N.A.S.T.Y." that convinced Lawless to take some time off and reconsider the band's creative direction.

W.A.S.P. became a very prominent target of the Parents Music Resource Center, an organization led by Tipper Gore and dedicated to opposing music with lyrics deemed violent or overtly sexual in content. This lowered the band's reputation to such a degree that concert halls were getting bomb threats, band members were receiving death threats by the hundreds, and singer Blackie Lawless was shot at twice (though not hit). Interestingly, the publicity this controversy generated ultimately improved album sales. Lawless sued and won a case against the PMRC for copyright infringement.

In 1987 W.A.S.P. had their song "Scream Until You Like It" included on the soundtrack of the movie Ghoulies 2. The same year, a few dates during the Inside The Electric Circus tour were recorded and on November 27, 1987, the Long Beach arena concert was released as the Live...In the Raw album. Unfortunately, by this time, Steve Riley had left W.A.S.P. to join L.A. Guns.

W.A.S.P.'s fifth album, The Headless Children, was released on April 15, 1989 and was their first album without any overtly sexually explicit songs included. It was also their first album to sell rather poorly, only reaching #48 on the Billboard 200 before quickly falling off the charts. However, it would be W.A.S.P.'s most critically acclaimed work up to that point and, according to a recent Lawless interview, it is now actually the highest selling W.A.S.P. album to date. The drumming duties for the album were handled by former Quiet Riot drummer Frankie Banali. It featured two of the band's most highly acclaimed songs, the power ballad "Forever Free" and a cover of The Who's "The Real Me".

Blackie Lawless. W.A.S.P. live in Stavanger, Norway. (Photo: Espen Mills)Chris Holmes left the band in August 1989, stating that he wanted to "have fun, you know". Lawless responded with a caustic remark about the fact that 'some guys want to stay at home and wear aprons,' hinting at the nature of Chris Holmes' relationship with his new wife Lita Ford. The band effectively disbanded a few months later with Blackie Lawless embarking on a short lived solo career. Lawless was originally slated to play T-1000 in the movie Terminator 2: Judgment Day, but was later replaced by Robert Patrick after Arnold Schwarzenegger deemed Lawless "too tall". Blackie commenced work on his solo project, but under pressure from both promoters and fans, he released it as a W.A.S.P. album. Ironically, many critics feel that the resulting concept album, The Crimson Idol, has been the best W.A.S.P. output so far.

The follow up to The Crimson Idol was Still Not Black Enough (1995), a collection of dark, introspective tunes that extended the Crimson Idol mythology. This time, rather than "hiding behind" alter ego Jonathan Steele, Lawless spoke directly to the audience about his own feelings (as stated in the liner notes). While the album lacked the cohesiveness of its predecessor, the lyrics still explored similar topics to Crimson Idol: being an outcast and misfit, the pressures of fame and society, and the search for love. Still Not Black Enough also included cover songs as "bonus tracks". The initial European edition included a different track listing from the American version and a subsequent American re-issue featured yet a different track listing. No version to date includes all the various tracks on one disc.

Chris Holmes returned to W.A.S.P. in 1996 and together they released Kill.Fuck.Die (1997) and Helldorado (1999). They also recorded two live albums from these tours, Double Live Assassins and The Sting respectively. The Sting CD and DVD were taken directly from an experimental webcast that Lawless claims to have had no control over. This release angered him as he was unhappy with the sound and picture quality.

The band continued with the album Unholy Terror in 2001. Chris Holmes left the band once again in 2002, stating that he wanted to 'play the blues'. He hooked up with fellow ex-W.A.S.P. member Randy Piper's band Animal, but soon dropped out of that project also. Holmes, for his part, has claimed he never played on Unholy Terror[citation needed].

Dying for the World, released in 2002, was written and recorded in less than a year which is very fast by Lawless' perfectionist standards. Its liner notes feature one of Lawless' strongest statements about political correctness, inspired by the 9/11 terrorist attacks.

In April 2004, W.A.S.P. released the first part of The Neon God, subtitled The Rise, a conceptual album about an abused and orphaned boy who finds that he has the ability to read and manipulate people. The second part, The Demise, was released in September 2004.

In 2005, W.A.S.P. headlined American Metal Blast. A video shoot for the track "Never Say Die" was planned with Ward Boult, a fetish photographer, directing. To this day, there has been no news as to whether the shoot resulted in anything concrete. It would have been the first W.A.S.P. promo video in ten years, the last being 1995's "Black Forever".

Early 2006 saw the seemingly stable lineup fall apart. Long-time session and tour drummer Stet Howland left first (on amicable terms), promising more specific information about the reasons for the split to be posted on his website. Larry Howe of Vicious Rumors was considered as a replacement. In May, the departure of guitarist Darrell Roberts, who went on to join the band Five Finger Death Punch, was announced and new guitar player Mark Zavon was brought in several days before the first tour date. The same press release confirmed Mike Dupke, and not Howe, would be the new drummer. Furthermore, two days later, Zavon was out of the picture as well, seeing Doug Blair step in on guitar.

A new album, Dominator was planned for release in October 2006, according to a statement made by Blackie Lawless at a tour stop in Kavarna. He then went on to play a new song from the album, entitled Mercy. A few weeks later, the release of the album was postponed until April 2007, with the band recording two news songs and dropping two cover songs, to be used instead as bonus tracks.

The release of the Dominator album was finalized for April 16 in the UK, April 20 in Scandinavia with the rest of mainland Europe following on April 27. The release dates for South America and Russia followed in early May.

Dominator reached #72 on the charts in Germany.[citation needed]

W.A.S.P. cancelled their North American tour due to their record label's loss of a distributor.[citation needed] They were going to finish up their shows in Europe and then reschedule their shows in the United States. They were unable to finish the shows in Europe because of a "family illness that needed immediate attention" which forced the band to return to Los Angeles right away. They were originally going to perform at Rocklahoma. As the tour was cancelled, W.A.S.P. was not able to perform at Rocklahoma and was replaced by Queensrÿche.

According to a press release made on blabbermouth.net on August 13, 2009, W.A.S.P. is set to relase their latest studio album, entitled Babylon on October 12, via Demolition Records.

Frontman Blackie Lawless has in recent interviews claimed that he's never going to play the song "Animal (Fuck Like A Beast)" live again, due to his religious beliefs.

No upcoming events with W.a.s.p.