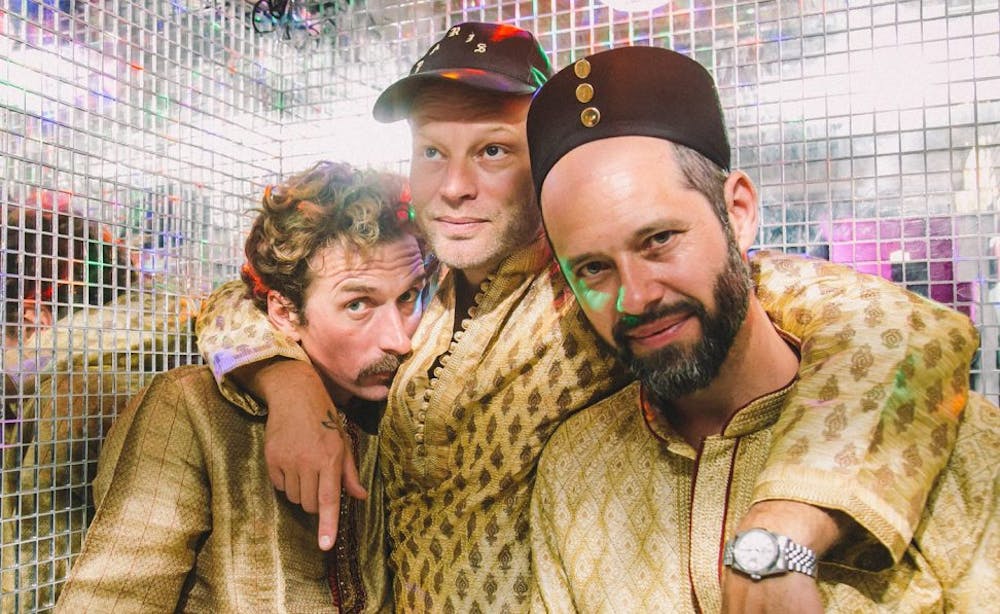 Follow WhoMadeWho to get alerts about upcoming events and special deals!

Almost two-decades into their extravagant career, the energy, fun, and celebratory nature of WhoMadeWho has expanded with time.

Without further ado, here are WhoMadeWho top 10 tracks of all time:

Almost two-decades into their extravagant career, the energy, fun, and celebratory nature of WhoMadeWho has expanded with time. Since getting together a few years after the turn of the new century, the Danish trio have come to mature beyond their dance-rock moniker from which they were originally associated with, to become something yet more complete, experimental, and mature. While still maintaining their wild, colorful and flamboyant nature, WhoMadeWho have evolved to a point where their energy is channeled through their industrious and manic wild shows, which stand strongly connected to their finely composed, harmonic and singular records. From career defining performances at Roskilde, sell-out shows worldwide, in-demand hybrid-DJ performances, hit records, and standout remixes, WhoMadeWho continue to flourish.

To date, the Danish trio of Tomas Barfod, Tomas Høffding, and Jeppe Kjellberg have released six studio albums on such prolific labels as Gomma and Kompakt, as well as a mix LP on Get Physical Music, along with a new forthcoming mix compilation for renowned Berlin-based institution, Watergate. Their most recent LP, ‘Through the Walls’ is emblematic of the band’s current form; a record that’s equal parts epic, heartfelt, soaring and pounding. A deep and introspective LP that ties together their indie-rock-disco past, with their enhanced studio sophistication, and connection to the club scene. Not so much a departure, but a more a step-beyond and above their founding template, when they were playing alongside the likes of LCD Soundsystem, and Soulwax.

Today, you’re more likely to see WhoMadeWho on such line-ups featuring Lee Burridge, Modeselektor, Tale Of Us and other dance music luminaries, as opposed to artists from the yesteryear of indie-dance.

After recording their first demo around 2003, the band — which kicked off from just a few jam sessions — were almost immediately picked up by Gomma, and had their first club hits with cover versions of Benny Benassi’s ‘Satisfaction’, and Mr. Oizo’s ‘Flat Beat’, followed by original tracks ‘Space for Rent’, and ’Hello, Empty Room’, the latter of which was featured on era-defining mix fabricLive.29, mixed by Cut Copy. As with most band origin stories, what started out as a fun side project, turned into a full-time outset thanks to a hysterical fan following, and also in part to their phenomenal live-performances. Germany’s biggest newspaper the Süddeutsche Zeitung even described them as ’the best band in the world right now’. Growing beyond their disco-punk debut, the band went on to release 2009’s ‘The Plot’, featuring hits ’TV Friend’ and ‘Keep in my Plane’.

Soon afterwards the band found themselves on Kompakt, and playing at such prestigious festivals such as Sónar. As the music scene around them changed, one thing that remained a constant within the band’s portfolio was their relationship with the club scene. The 2011 Tale of Us remix of the single ‘Every Minute Alone’ became a hit Ibiza record, which was soon followed with a momentous performance at their native Roskilde Festival in front of over 15,000 people. “It felt like we won over the whole of Denmark with this performance,” says Tomas Barford, about the experience. This in turn lead to the current amalgamation of WhoMadeWho, an experimental and more progressive act, that are as interchangeable onstage between guitars, synthesizers and vocals as they are in the studio. It was also the start of the band’s hybrid DJ set-up. Wanting to connect further with their community in the club scene, WhoMadeWho started touring as a DJ-live act, which sees them on the decks, with a mix of synths, vocals and live instrumentation, that’s forever evolving, changing, and with a solid injection of improvisation. For anyone who saw WhoMadeWho live on stage and was always surprised with the dynamism, and near-ferocity of their shows, they could now get this experience in the clubs throughout the world – along with the band’s on-top dedication towards pure showmanship, and dedicated style and fashion. It was through this that lead to the band being included on the Get Physical legendary mix series ‘Body Language’. That and some chart-topping remixes by the likes of DJ Koze, Adriatique, Maceo Plex, and others. The skeleton costumes might be have returned to the cupboard, but they were now replaced with a fine decorum of Eastern-styled hats, finely stitched-together shrouds, and well-cut suits, that radiated exoticism, and mysticism.

The WhoMadeWho of today have been traversing the array of genres that have made them successful, in a state beyond pigeonholing, enjoying all the elements of pop, indie, techno, disco, punk and funk, and more, that have been a part of their output so far. “It’s all open to us,” Barfod states about their musical approach. “Everything comes easy, and the vibe from our early days is totally back.” Last year the band played at Burning Man, which for them was yet another turning point in their career. “We have been a band for quite some time, and even though there have been some bumps in the road, we still have fun together, we’re still great friends, we have fans all over the world, and still keep growing in our musical development”. Through their growth, characters, outfits and unique style, WhoMadeWho have managed to distinguish themselves radically in the club scene, which is why their release on Watergate records is as such a natural fit. Watergate 26, due to be released on April 5th is a slick mix of melodic techno, new disco and other erstwhile vocal and psychedelic sounds. It’s a playful and adventurous, that ultimately defines the band as a whole, and will surely take them to yet even further parts of the globe.