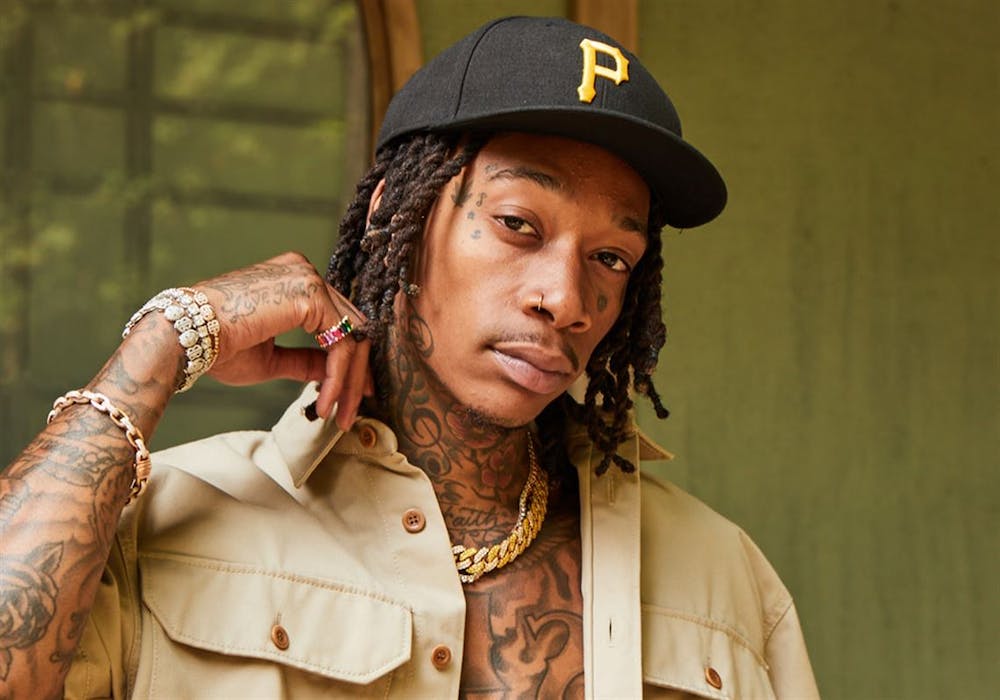 Follow Wiz Khalifa to get alerts about upcoming events and special deals!

"Being out in front of people and just being ‘The Man’” might sound like a vague and ridiculous dream to have, but for Cameron Thomaz it might be the most appropriate thought to cross any mind.

Wiz Khalifa has played in major festivals like Rolling Loud

Without further ado, here are Wiz Khalifa top 10 tracks of all time:

Wiz Khalifa, Empire of the Sun

"Being out in front of people and just being ‘The Man’” might sound like a vague and ridiculous dream to have, but for Cameron Thomaz it might be the most appropriate thought to cross any mind. Better known as Wiz Khalifa, the son of two military parents has always had his eye on being a new standard by which cool is measured. Rapping since the third grade and starting to record music at 14 was probably a step in the right direction. The next best move? Inking a deal to Rostrum Records after a meeting with Benjy Grinberg.

Fresh out of high school, it was time to either sink or swim. In 2005 Wiz released his first mixtape, “Prince of the City: Welcome to Pistolvania.” The mixtape was quickly accepted by the local scene and began to gain buzz outside of Pittsburgh. With that excitement growing by the day, it was the perfect time for a proper commercial album. Wiz soon dropped “Show and Prove,” which Okayplayer.com claimed was “arguably the best album of the year.” The accolades began piling up and Khalifa was receiving significant co-signs from XXL, Rolling Stone, and VIBE, alike. A deal with Warner Bros. Records soon followed.

Any other 20-year-old probably would’ve let all this hype go to their heads, but not Wiz. As focused as ever, Wiz only saw this praise as an opportunity to work harder. In 2007, with the help of famed mixtape DJ, Green Lantern, Wiz released “Grow Season,” which was soon followed by “Prince of The City 2.” The sequel to “Prince of The City” would soon out grow its predecessor so much so that the demand for Khalifa’s music was greater than ever.

Unfortunately, the relationship between Khalifa and Warner Bros. dissolved, and once again, Wiz found himself as an independent artist. Typically a huge roadblock for any artist, Wiz refused to allow the lack of a major label deal to slow down his momentum. He and his Rostrum team hit the ground running in 2009 and released three highly acclaimed mixtapes: “Flight School,” “How Fly,” a collaborative mixtape with New Orleans rapper Curren$y, and “Burn After Rolling.” The album “Deal Or No Deal” followed in the Fall and debuted at the top of the iTunes “Hip-Hop” chart, and has remained in the top 50 to date.

In the months following, both his fanbase (known as the “Taylor Gang”) and the anticipation for his new mixtape grew daily. Once Wiz dropped “Kush & Orange Juice” in early 2010, it was clear that he had established himself as one of the rap-game’s brightest young stars to watch. With an unprecedented amount of downloads, not to mention both the top search on Google as well as the number one trending topic on Twitter, it seemed as if the entire nation was on board with the “Taylor Gang” movement. Many said that the release of “Kush & Orange Juice” placed Wiz as the valedictorian of his “XXL Freshmen 10” class and kicked open the doors he and his team were looking to walk through.

Fast forward a few months, and together Wiz and Rostrum Records proudly announced that these doors were those of Atlantic Records, the new home to Wiz Khalifa. Following this huge milestone in his career, Wiz soon embarked on a stint on the famed “Rock The Bells” tour alongside such legends as Lauryn Hill and Snoop Dogg, immediately followed by his nation-wide headlining tour, appropriately dubbed the “Waken Baken Tour.” After receiving co-signs from a multitude of rap veterans, including Rick Ross and Diddy, and humbly rejecting Drake’s offer to join his recent tour, it became evident that Wiz also established himself as a prominent staple online with over 3,000,000 friends on Facebook, and over 1,000,000 fans following him on Twitter. With the video for his first Atlantic Records release, “Black & Yellow,” getting an astonishing 30 million views on YouTube, there is no question about it: Wiz Khalifa’s debut album is bound to be something great.

No upcoming events with Wiz Khalifa