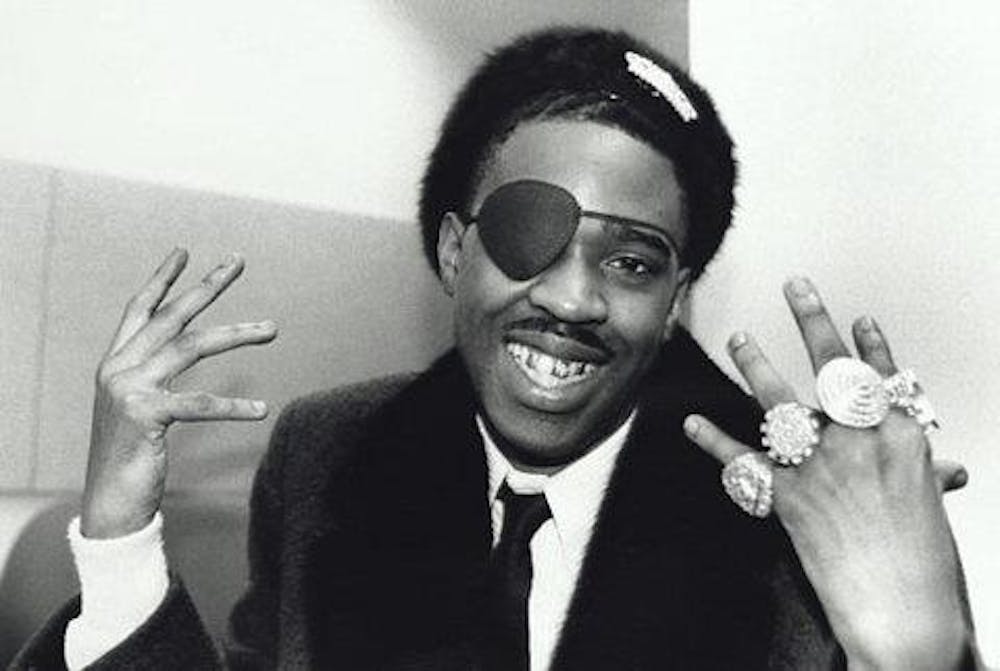 Follow Slick Rick to get alerts about upcoming events and special deals!

Slick Rick foreshadowed and epitomized the pimpster attitude of many rappers during the late '80s and early '90s, with gold chains, his trademark eye-patch, and recordings that were no less misogynistic -- "Treat Her Like a Prostitute," for example, became an underground hit in 1988, though it was justly criticized for its view of women.

Without further ado, here are Slick Rick top 10 tracks of all time:

Slick Rick foreshadowed and epitomized the pimpster attitude of many rappers during the late '80s and early '90s, with gold chains, his trademark eye-patch, and recordings that were no less misogynistic -- "Treat Her Like a Prostitute," for example, became an underground hit in 1988, though it was justly criticized for its view of women. His 1989 album, The Great Adventures of Slick Rick, was a certified-platinum classic, but before he could record a follow-up, Slick Rick was arrested for attempted murder. Out on bail thanks to Def Jam Records' label head Russell Simmons, Rick recorded The Ruler's Back in three weeks and released the album in 1991. After his release from prison two years later, he recorded Behind Bars for a 1994 release.

Born to Jamaican parents in South Wimbledon, London, on January 14, 1965, Ricky Walters was blinded by broken glass as an infant and took to wearing an eyepatch from an early age. He emigrated with his family to the Bronx in the late '70s and attended the La Guardia High School of Music & Art, where he became friends with future rapper Dana Dane. The two formed the Kangol Crew, and began performing in hip-hop battles around the city. At one 1984 battle in the Bronx, Rick met Doug E. Fresh, and began playing with his Get Fresh Crew (which also included Chill Will and Barry Bee). Fresh's number four R&B hit, "The Show," exploded just one year later, and MC Ricky D. -- as Rick was then known -- leaped to a solo contract two years later, after an acquaintance with Russell Simmons led to his signing to Def Jam Records, the biggest label in hip-hop at the time.

Slick Rick recorded his debut record, The Great Adventures of Slick Rick, and released the album in 1988. "Treat Her like a Prostitute" became a sensation on the streets but R&B radio stations were understandably reluctant to play the track; instead, they pushed his duet with Al B. Sure!, "If I'm Not Your Lover," and it made number two in 1989. "Children's Story" hit the R&B Top Five that same year, but early in 1990, Slick Rick was arrested after shooting at his cousin -- who allegedly harassed Rick's mother -- and leading police on a high-speed cruise. Before his sentencing, 21 songs were recorded and hastily released as The Ruler's Back. The album failed to move at all, though Rick's confession track "I Shouldn't Have Done It" scraped the R&B charts later in 1991. Featured in the rap documentary The Show (released in 1995) -- in a segment where Russell Simmons actually visits the prison -- Slick Rick was released on a work program in 1996, although his Behind Bars album appeared in 1994. Art of Storytelling was issued in 1999, an artistically successful comeback that paired him with MC's like Outkast and Snoop Dogg but did more the emphasize his talents as a solo artist.

While performing live on a Florida cruise ship in the summer of 2002, INS officials seized the rapper and brought him to a prison. Although the organization had unsuccessfully been trying to deport Rick since 1991, they finally appealed enough times to get the Board of Immigration Appeals to make a ruling in favor of sending him back to England. Although his wife, children, and parents are all American citizens, the fact that Rick was born in England is enough of a technicality to warrant his deportation. The situation was even more frustrating because of the INS's insistance on deporting the rapper, spending more than ten years trying to send him back despite the ridiculous circumstances surrounding the situation. His parents had lived in London because of their job situation, and moved him back to the United States at the age of 11. He had never bothered to change his citizenship because of the young age at which he had been relocated. Held in prison through the end of the year, famous friends like Russell Simmons and Will Smith attempted to help his cause but he was continually refused bail.