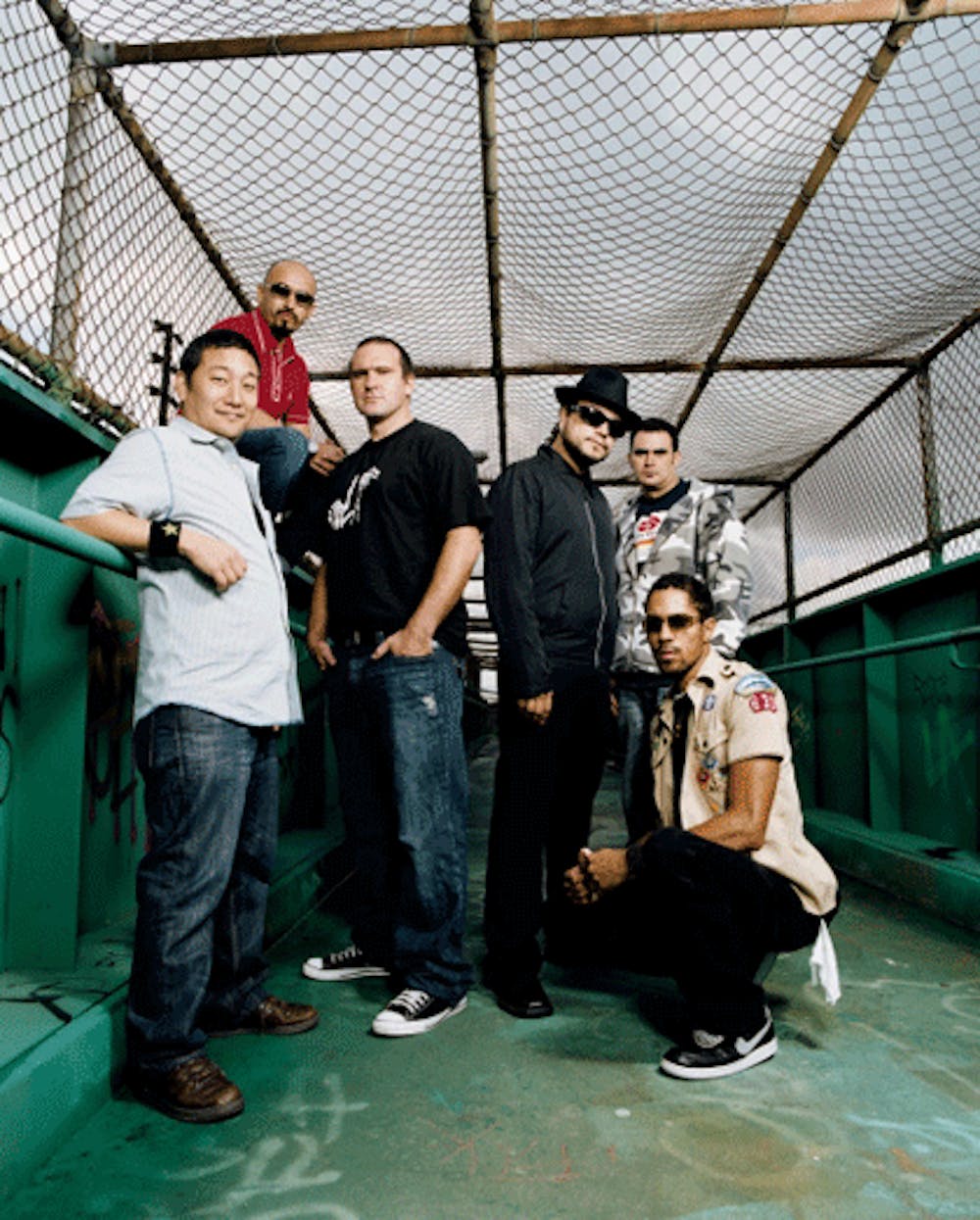 Follow Ozomatli to get alerts about upcoming events and special deals!

In their fourteen years together as a band, celebrated Los Angeles culture-mashers Ozomatli have gone from being hometown heroes to being named U.S.

Without further ado, here are Ozomatli top 10 tracks of all time:

In their fourteen years together as a band, celebrated Los Angeles culture-mashers Ozomatli have gone from being hometown heroes to being named U.S. State Department Cultural Ambassadors.

Ozomatli has always juggled two key identities. They are the voice of their city and they are citizens of the world.

Their music-- a notorious urban-Latino-and-beyond collision of hip hop and salsa, dancehall and cumbia, samba and funk, merengue and comparsa, East LA R&B and New Orleans second line, Jamaican ragga and Indian raga-- has long followed a key mantra: it will take you around the world by taking you around L.A.

This has never been truer for Ozo than it is in 2009. More than ever before, the band is both of the world and of L.A.

Originally formed to play at an area labor protest over a decade ago, Ozomatli spent some of their early days participating in everything from earthquake prep "hip hop ghetto plays" at inner-city L.A. elementary schools to community activist events, protests, and city fundraisers. Ever since, they have been synonymous with their city: their music has been taken up by The Los Angeles Dodgers and The Los Angeles Clippers, they recorded the street-view travelogue "City of Angels" in 2007 as a new urban anthem, and most recently, they were featured as part of the prominent L.A. figures imaging campaign "We Are 4 L.A." on NBC.

"This band could not have happened anywhere else but L.A.," saxophonist and clarinetist Ulises Bella has said. "Man, the tension of it, the multiculturalism of it. L.A. is like, we're bonded by bridges."

Ozo is also a product of the city's grassroots political scene. Proudly born as a multi-racial crew in post-uprising 90s Los Angeles, the band has built a formidable reputation over four full-length studio albums and a relentless touring schedule for taking party rocking so seriously that it becomes new school musical activism.

"Just being who we are and just doing what we're doing with music at this time is very political," says bassist Wil-Dog Abers. "The youth see us up there and recognize themselves. So in a playful, party-type of way, I think it's real easy for this band to get dangerous. We are starting to realize just how big of a voice we actually have as a band and how important it is for us to use it."

In 2007, the reach and power of that voice went to new global heights. The band had long been a favorite of international audiences-playing everywhere from Japan to North Africa and Australia-and their music had always been internationalist in its scope, seamlessly blending and transforming traditions from Africa, Latin America, Asia and the Middle East (what other band could record a song once described as "Arabic jarocho dancehall"?), but last year, they entered the global arena in a different way.

They were invited by the U.S. State Department to serve as official Cultural Ambassadors on a series of government-sponsored international tours to Asia, Africa, South America, and the Middle East, tours that linked Ozomatli to a tradition of cultural diplomacy that also includes the esteemed likes of Duke Ellington, Benny Goodman, and Louis Armstrong.

For those who wondered how a band known for its vigilant anti-war stance could become a partner with the very Bush administration they have so vocally critiqued in the past, the band was clear about their position: it was all about responding to a global "cry for change" by using music to promote messages of peace and understanding.

As Bella told The Los Angeles Times during the band's visit to an orphanage in Cairo, "Our world standing has deteriorated. I'm totally willing and wanting to give a different image of America than America has given over the last five years."

In places like Tunisia, India, Jordan, and Nepal, Ozo didn't just play rousing free public concerts, but offered musical workshops and master classes and visited arts centers, summer camps, youth rehabilitation centers, and even a Palestinian refugee camp. They listened to performances by local musicians and often joined in for impromptu jam sessions with student bands and community musicians. Most shows ended up with kids dancing on stage and their new collaborators sitting in for a tabla solo or a run on the slide guitar.

In the case of Nepal, the band's trip was part of a celebration of the country's newly ratified peace accord and they arrived with a direct message: "different instruments but one rhythm, together we can make a prosperous Nepal." Their concert, which drew over 14,000 people, was a historic one-Ozo were the first Western band to do a concert in Nepal and the event was the country's first peaceful mass gathering that was not a protest or religious ceremony.

For the U.S Embassy in Nepal, Ozomatli were a model of how diversity promotes change. According to an official embassy release, "Ozomatli is living proof that diverse backgrounds make a stronger and more prosperous whole. Ozomatli's nine members are committed to addressing social issues of local, national and international importance and they use the power of their own diversity to achieve this."

Suddenly the lessons of L.A. had found their way into the world at large.

"I've always felt that music is the key to every culture, the beginning of an understanding," says vocalist and trumpet player Asdru Sierra. "It's a language far more universal than politics."