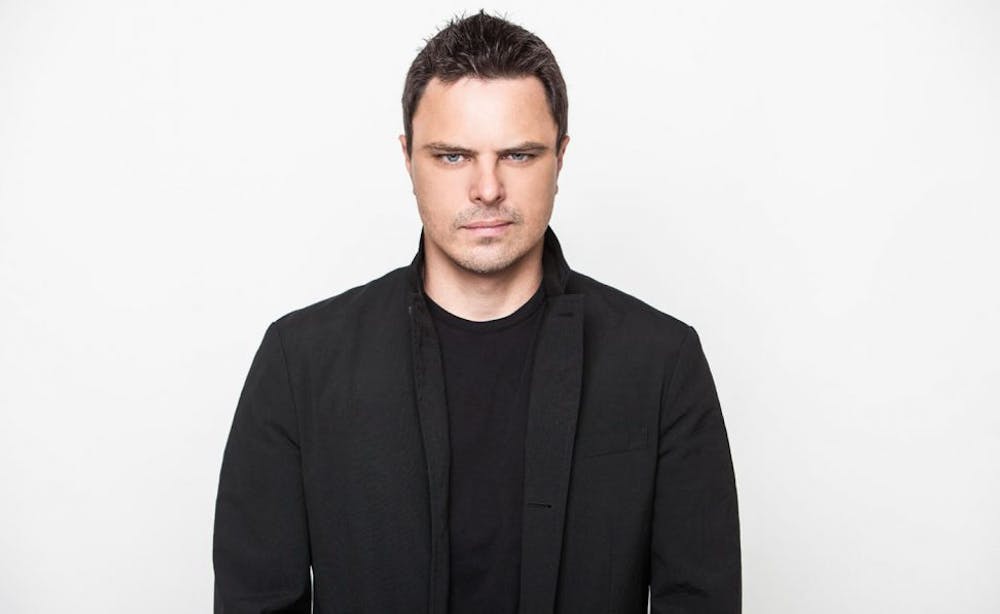 Follow Markus Schulz to get alerts about upcoming events and special deals!

Introduction: Over the last 10 years Markus Schulz has crafted the individual musical identities of progressive, trance & house into his own unique fusion sound.

Without further ado, here are Markus Schulz top 10 tracks of all time:

3. Return from the Sand Sea

9. Odyssey to the Netherworld

Introduction: Over the last 10 years Markus Schulz has crafted the individual musical identities of progressive, trance & house into his own unique fusion sound. The combined influence of his headlining DJ sets; Armada and Coldharbour label releases and highly prominent Global DJ Broadcast radio show have placed him at the forefront of the US EDM revolution. This success has been reflected in weekly sets spun in front of tens of thousands, a GDJB listenership up in the millions and critically acclaimed albums, including ‘Do You Dream?’ and most recently ‘Scream’. In 2008 Schulz broke into the # 10 of DJ Mag’s Top 100 chart and has maintained a successive run of high-ranking positions ever since. He holds the 2012-2013 DJ Times magazine reader-voted title of America’s Best DJ. Playing over 150 gigs every year, he has become the busiest international DJ playing out of the United States.

Markus Schulz – The DJ: Through his natural audience interaction, flawless harmonic mixing, intuitive tune selection and now famous open-till-close sets, he has wowed crowds in every major metropolis. Schulz’s DJ career has run largely parallel to that of his productions. In the early noughties, having concentrated on the hinterland between trance & progressive, he began to reach audiences further and further afield. His career received a significant boost when, in 2004, he signed with heavyweight DJ agency, David Lewis Productions (also home to Armin van Buuren). Now a regular fixture at the world’s biggest & most famous clubs, arenas and festivals, he lays down his inimitable trance-progressive vision on a weekly basis. In Europe, he’s smashed Transmission, Nature One, Dance Valley, Electronic Family, Sunrise and Tomorrowland; worked tent-pegs loose at Creamfields; gridlocked Global Gatherings and played open-till-close sets at Space, Miami, Avalon, LA and Amnesia, Ibiza. Stateside the colossal Electric Daisy, Nocturnal, and Ultra Festivals have allfelt Schulz pressure and yet further afield still he’s engineered floor uproar across South East Asia and Australia. Schulz polled 4 consecutive years inside DJ Mag’s world’s top 10, is regularly ranked in the FTB, Trance Addict and Trance Podium charts as trance’s 2nd biggest spinner and won Best American DJ at the 2008 IDMAs.

How It Began: Born in Eschwege, central Germany, Markus emigrated to the United States. Age 13, his dance music awakening came during the grip of the country’s then-nascent breakdance scene. His early production and DJ career roughly tracked that of the second Stateside House explosion and he caught his first production break in 1993 when he remixed Sagat’s ‘Why Is It? (F** Dat)’ for FFrr. Markus’ freshman production release followed in 1994 with the 6-track ‘Plastik Trax EP Vol 1’. Throughout the mid to late Nineties he continued to accrue acclaim with a range of releases on numerous luminary U.S. labels. In 1998 he recorded ‘You Won’t See Me Cry’ for Plastik Records (his first label), which was picked up by the UK’s Eve Records and became his first non-domestic release.

Coldharbour Recordings: Schulz’s sound notably came quickest to the ears of European DJs. Following the formation of the Armada group in 2005, Armin sought Markus out and asked him to start compiling tracks for a new vinyl series. The Coldharbour Sessions EPs launched in 2004 (with the first 3 releases coming out on the already established Electronic Elements label). In succession they resoundingly impacted on dancefloors and within 12 months Coldharbour the label came into existence. Named after Markus’ then-production base in London’s Coldharbour Lane, its output immediately brought a new sound-type to Armada’s repertoire. It also became a lightning rod for a new generation of prog-inclined producers – setting in motion the careers of (amongst others) Santiago Nino, Rex Mundi, Mark Otten & Niklas Harding. With 2005 under the spell of Coldharbour’s more refined, minimal yet still melodic take on the trance sound Markus struck again with the first Coldharbour Sessions mix compilation. Such has been the success of the imprint that in 2007 it was joined by sub-label Coldharbour Red. This, in turn, became the launch pad for the careers of Marcus Schössow, tyDi, Glenn Morrison & Evol Waves and was the point of re-entry for early Schulz side-project, Dakota (see section below). In August 2010 it celebrated it 100th release with Schulz’s cover of Cass & Slide’s ‘Perception’. Eight years after its birth, Coldharbour stands among the top tier of trance & progressive labels and received a Best Global Label nomination at the 2013 IDMAs. Getting regular props from the press, in 2011 DJ Mag stated that it was: “a imprint in the rudest of good health!” while Mixmag said: “Coldharbour is a label fair brimming with ready-to-break production talent”.

M.S. Productions 2005 – 2009: Perfectly intersecting the quality/quantity axis, Markus’ own productions have been fundamental components in marshalling clubbers and music lovers to his sound. Over the course of the last half-decade singles like ‘First Time’ & ‘Without You Near’ (2005), ‘Fly To Colours’, ‘Never Be The Same’ & ‘I Am’ (2007) ‘Perfect’ & ‘Cause You Know’ (2008) & most recently anthems like ‘The New World’ & ‘Do You Dream?’ have each played their vital part. Markus is also a regular production collaborator. In 2005 he famously teamed up with likeminded producers Gabriel & Dresden and Departure for ‘Without You Near’ and did the same with Andy Moor on ‘Daydream’ and Max Graham on ‘Goodbye’. The impact of all the singles has been catalysed throughout the period by his studio albums ‘Without You Near’ (2005) and ‘Progression’ (2007). M.S. Productions 2010 – 2012 - ‘Do You Dream’: In February 2010, Schulz completed the principle recording of his third longplayer, ‘Do You Dream?’ The 16-track album was released on June the 15th in many key territories. Its release prompted Tilllate Magazine to say it was “energetic” & “exhilarating”, whilst DJ Mag said: “it’s hard to see why you won’t completely adore this”. On April the 1st, 2011 the album’s remix edition was released. It included track remakes from heavyweights including Ferry Corsten, Cosmic Gate & Super8 & Tab, as well as core Coldharbour artists, inc. Tucandeo, Mr Pit and Mike Foyle. The remix edition was followed a month later by Schulz’s first DVD release in May ‘11, which documented his ‘Do You Dream?’ round-theworld tour. October 2011 saw Schulz begin work on his fourth, as yet untitled artist album. It was announced in March of 2012 that ‘Go!’ - a collaboration with fellow German producer Dennis Shepard, would be the first single to appear from it. Markus Schulz Pres. Dakota: Markus has only made rare use of pseudonyms throughout his career - seeing them only as valuable if they represented an outlet for something other than his established sound. At the turn of the millennium he released 3 tracks (‘Swirl’, ‘Frozen’ & ‘Lost in Brixton’) under the alias, Dakota. Over time the tracks became first-contact points for many new fans. In 2009 Schulz paid dues to that by resurrecting the guise, recalibrating its sound and directed his attentions to a whole album of material. ‘Thoughts Become Things’ was the result and it became a route diversion that branched out to embrace techno, house and other sub-genres. It swelled both Schulz’s fanbase and the range of DJ support for his music. The album justified 7 single releases that have included particular fan-favourites ‘Chinook’, ‘Johnny the Fox’, ‘Koolhaus’ & ‘Mr Cappuccino’. Such was its success in July of 2011 he followed it up with the sequel – ‘Thoughts Become Things II’. Giving it their prized Album of the Month award, MIXMAG said: “With ‘Thoughts II’ Schulz’s Dakota guise could be about to take centrestage”, while DJ Mag noted it contained “lush riffs at a housier tempo” and was “epic stuff”. Further afield America’s DJ Times wrote: "every track pushes great sounds and solid club vibes that throw you off your feet", whilst Germany’s Raveline said that: "no DJ should miss out on the techier, darker and more progressive side of the Schulz sound". To date it has spawned 5 singles (‘Sinners’, ‘Sleepwalkers’, Katowice’ and the AA ‘In A Green Valley’/’Saints’), as well as a remix edition with reworks from Arnej, KhoMha, Mr Pit, Wellenrausch and others.

The Global DJ Broadcast show: Now in its sixth year Schulz’s GDJB has continued to be a beacon for an always-growing throng of trance & progressive dance fans. Having begun life on Miami’s Party 93.1 station, it is now broadcast through DI.fm and Sirius/XM satellite, the Global DJ Broadcast site and over 50 other FM stations around the planet. Based on a regular format, the first show of each month is a two hour long mix from one of Schulz’s rolling World Tour gigs - ones that have of late included Medellin, Columbia, St Petersberg, Russia & Amnesia in Ibiza. Subsequent shows in the month feature Markus mixing his broad span pick of the current electronic dance music best for an hour (which includes the forum-voted Global Selection track of the week) followed by guest mixes from both established and up-and-coming DJs.

Markus Schulz – The City Albums: Markus is also responsible for one of the longest running and respected compilation album series in trance history. Providing this microcosmic view of his sound, the albums have become cornerstones for fans collections, with each travelogue edition bringing in a fresh wave of supporters. Notably, the Amsterdam ’08 release was nominated for an IDMA award for Best Full Length DJ Mix (in the same year that he took home the trophy for Best American DJ). Kicking off in 2005 with Miami, it moved to Ibiza in ’06, Amsterdam in ’08 and Toronto in ’09. The following year Schulz was “notably ahead of the curve” (Mixmag) with Las Vegas’10 release, presaging the city’s EDM rise by 12 months. In 2011 he focused on dance music’s surge in popularity in Eastern Europe with Prague’11, before returning to the States for his most recent edition. ‘Los Angeles ‘12’ captured the establishment of EDM as a dominant mainstream force in the American music scene. In giving it their Album of the Month, Mixmag said: “Schulz clearly demonstrates his understanding of the uncompromising sounds that holds sway over LA’s clubs and arenas”.

Markus has gone on to rewire tracks by Oceanlab, Motorcycle, Dance 2 Trance, Cosmic Gate, Nalin & Kane, Kyau & Albert, John O’Callaghan, & Space Manoeuvres amongst many, many others.