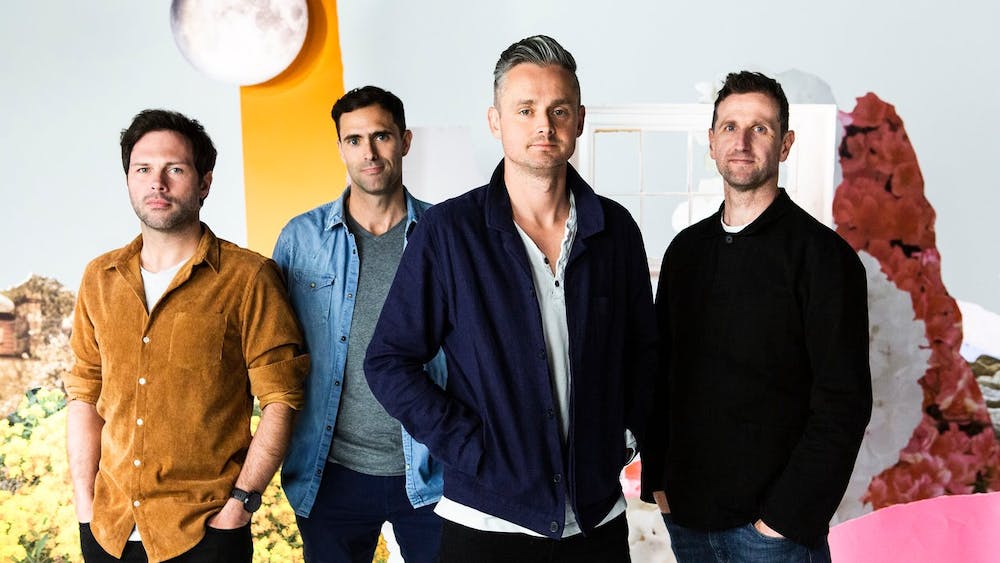 Follow Keane to get alerts about upcoming events and special deals!

As problems go, this is among the nicer ones.

Without further ado, here are Keane top 10 tracks of all time:

1. Somewhere Only We Know

3. This Is The Last Time

4. Nothing In My Way

7. Silenced By The Night

As problems go, this is among the nicer ones. Tim Rice-Oxley clicks a playlist on his iTunes folder. This is where all the contenders for the final tracklisting of Keane’s new album sit in quarantine. Over the past few months, band members have made the case for their favourites; friends have chipped in with their opinions. But, as the band gather round Tim’s computer, another click takes us to the twelve songs that comprise Keane’s fourth album ‘Strangeland’. “Everyone happy with that?” says the group’s main songwriter. It feels a little bit like the point in the marriage vows where onlookers are asked to name any lawful impediment to the imminent declaration of marriage. “Well, that was easy,” says Keane’s frontman Tom Chaplin, albeit with a blinking incredulity that suggests nothing in life is quite that straightforward.

Indeed not. Four years have elapsed since Keane’s last album ‘Perfect Symmetry’; two since ‘Night Train’, the mini-LP which followed its three full-length predecessors to the top of the British album charts, securing them a place in pop history. If Keane’s feverishly loyal fanbase wondered what the group’s next album would sound like, they weren’t the only ones. In the eight years following the release of 2004’s 9× platinum Brit award winning ‘Hopes & Fears’, every Keane album has marked a clear progression from the previous one: the anxious emotional terrain mapped out by ‘Under The Iron Sea’; the iridescent poptimism of ‘Perfect Symmetry’ featuring the electro charged hit song 'Spiralling', voted Q Magazine’s 2008 Song Of The Year. But what next? It was a question that Tim had asked himself from time to time. “I felt that on Perfect Symmetry, I had allowed myself to get as excited by textures as much as the actual songwriting. In the wake of that, I spent a lot of time thinking about what it is that makes a song magic.”

No doubt, even as you read this, there is probably a room full of boffins in Silicon Valley studying musical algorithms in an attempt to work out the very same question. In 2009, as Keane wended their way around the world, touring ‘Perfect Symmetry’, Tim’s subconscious set about doing some of that work for him. In a car on his way from Sao Paolo airport to the hotel, the basis of a new song took shape in his head. Its title, ‘Sovereign Light Café’, came from the seafront eaterie in Bexhill where, as teenagers, cycling from nearby Battle, he and Keane drummer Richard Hughes would “spend hours, sunbathing underneath cloudy skies, vainly trying to attract the attention of any woman who was vaguely within our age group. Alas, Bexhill doesn’t tend to attract too many of those.” Once a “Springsteeny-sounding” demo” was laid down on the tour bus, the group listened back to what they had. The song’s sentiments – perhaps something to do with trying to make sense of the present by taking a look at your past – seemed to shine a light on what would follow. “It felt very emotional,” recalls Tim. “From the heart. Less filtered somehow.”

From hereon in, the other decision that Keane quickly came to was that this album would be ready when it was ready. No time-constraints. Once one song was written, it would somehow lay down a series of clues to the next one: the redemptive declamations of ‘Silenced By The Night’; the spirit-swelling ‘Neon River’. And so on, and so on. “I think I must have had about 100 songs in various forms before we entered the studio,” says Tim. Whittling it down to a shortlist of “about 50” was a process that involved the rest of the band. “I can’t say I envied him,” says Richard, “You’d get this email with no words – just a title in the subject header and an MP3 attached to it. If your reaction was lukewarm, only then would you find out that was the one he’d spent three days writing!”

Invariably, the ones that made it through seemed to come from a place of profound reflection: the attempt to make sense of the route by which Keane had, somehow, become grown-ups. ‘Watch How You Go’ is classic Keane – a bittersweet friendship song, freighted with an emotional heft that only extra years can bring.  Tom Chaplin remembers “hearing it for the first time and wondering if it was about me. But then, that’s a quality that Tim’s best songs have. They feel personal to your situation, but then, when you take them out onto the road you realise that’s how everyone feels.” Tom remembers feeling a similar kinship with the sentiments of In Your Own Time. “Straight away,” he smiles, “On a personal level, I was itching to sing it.”

Here and on so much of ‘Strangeland’, we find ourselves in the company of adults attempting to make sense of their present situation. Life gets better, the human attachments you make grow deeper and, along the way, ambitions are realised. Lest we forget, ten years ago, Keane without a record deal, living and rehearsing in a shared space in Tottenham. At one point Tim even tried to raise extra cash by taking part in a medical drug trial. So why does unalloyed euphoria feel so much more attainable in the idealistic throes of youth, when there’s so little to lose? Out of that paradox grew not just ‘Sovereign Light Café' and ‘The Starting Line’. “Forget the ghosts that make you old before your time,” exhorts Tom Chaplin on the latter, with a vocal that all but lacerates the heart-strings. Albeit in a very different way, ‘On The Road’ is borne of similar sentiments, a reminder that to succumb to a fear of the unknown is to deny the very things that make life worth living. You only need to hear the way the first verse cannons into a dizzyingly euphoric chorus to realise that Keane have delivered one of the festival anthems of the summer.

Perhaps that’s no coincidence. When Keane aren’t playing festivals, they often attend them as punters. ‘You Are Young’ appeared in Tim’s head at Glastonbury, simultaneously losing and finding himself among a huge crowd of music lovers, realising that “you’re never too old to feel those moments of epiphany.” If you’ve seen Keane live, you’ll know that they are old hands at dispensing a few of those moments themselves. It’s almost as though Tim – by his own admission, a man with a tendency to “overanalyse things” – creates these songs as ring-fenced spaces where he can, if only for four minutes, forget himself. Perhaps that's why Keane's appeal had long since transcended tribal boundaries. Emotional responses, by their very nature, tend not to observe genre lines.

If that’s the effect they have on Keane’s principal songwriter, there’s a fair bet that it’s also the effect they’ll continue to have throughout the world, as far afield as United Stated and South America - where the group routinely pack arenas and fans routinely take to camping outside the hotel days ahead of the band's arrival. In Russia the group found their train besieged by hundreds of fans after letting slip the details of their journey to St. Petersburg. When Tom Chaplin talks about “that fantastic unidentifiable thing that distinguishes a good song from a great one,” your thoughts immediately turn to indisputable Keane classics like ‘Somewhere Only We Know’, ‘Everybody’s Changing’, ‘Is It Any Wonder?’, ‘The Night Sky’ and ‘Spiralling’. To that list, we can surely add a few more. The febrile small-hours electronica of ‘Black Rain’ (written after Tim saw Ari Folman’s harrowing animated war film Waltz With Bashir) and the spare, spectral intimacy of ‘Sea Fog’, named after Tim’s studio, are reminders that Keane have never been afraid to cast their net wide for sonic and lyrical inspiration.

For all of that there are certain songs which, at a stroke, are unmistakably, quintessentially Keane. Songs like ‘Disconnected’ and ‘Day Will Come’. “Some days set your world on fire/Some days they sink like stones,” sings Tom on the latter, before lurching into a driving chorus that could rouse a corpse into life. A real once-heard, never-forgotten moment. Boasting a hook so huge you could raise the Titanic with it, ‘Disconnected’ is another example of Keane’s ability to alchemise complicated emotions into songs of deceptive simplicity.

For new member Jesse Quin (bass), the latter song holds special memories. “I’d been playing live with them for a few years,” recalls Jesse (who also collaborated with Tim on 2010’s Mt Desolation project). “They asked me to meet them in a pub near Tim’s place in Bermondsey. I had a feeling they were going to ask me to join, so I didn’t have to think too hard about what I was going to say. I hadn’t been in the band for long before 'Disconnected' appeared. We put it into our live set and, as with ‘Sovereign Light Café', it seemed to inform everything else that followed.”

Suggest to Jesse that it must have been daunting to join the ranks of a three-piece comprised of lifelong friends and he shrugs in a manner that suggests it hasn’t been playing on his mind. “You really don’t notice it,” he says, “Once in a while, something will happen that’s unique to their friendship. If someone’s behaving oddly, you point it out and they say, ‘Oh, that? That’s because he fell off a horse when he was eight.’ But no, it doesn’t feel like a club I’ll never be part of.”

For Richard, the difference made by Jesse’s arrival has been huge. “I love having Jesse in the band. It feels like we’re a proper rhythm section.” Tom extends the same welcoming sentiment to the album’s producer Dan Grech. “The sense of rejuvenation on these songs suggested to us that it would be good to hook up with someone who was young and full of ideas. And with Dan, we got exactly that. He’d just come from working with The Vaccines and Lana Del Rey, and he was clearly on a roll.” Richard picks up the thread, “The fact is that so many things came together for this album. As well as having Dan and Jesse on board, Tim had finished building his studio. And that makes such a huge difference. Suddenly, you’re not watching the clock the whole time. It’s far more conducive to creativity.”

And with that release of pressure, ‘Strangeland’ saw the notion of fun resurface in the shared world of Keane in a way that it hadn’t quite done since the sessions for ‘Hopes & Fears’. Richard casts an eye behind him at the rolling Sussex scenery that encircles the

studio Keane have called home for the last few months. “In many respects, it feels like the completion of a circle. On the album you have songs that draw upon the experiences we used to share as kids, growing up in Battle. You can never really go back, of course. We’re married. Some of us have kids. Once in a while though, after a good day, we’ll go to the local pub and talk about everything and nothing until it’s time to go home. Whatever it is that makes us Keane – that invisible glue – is still there. And you can hear it all over ‘Strangeland’.”

No upcoming events with Keane