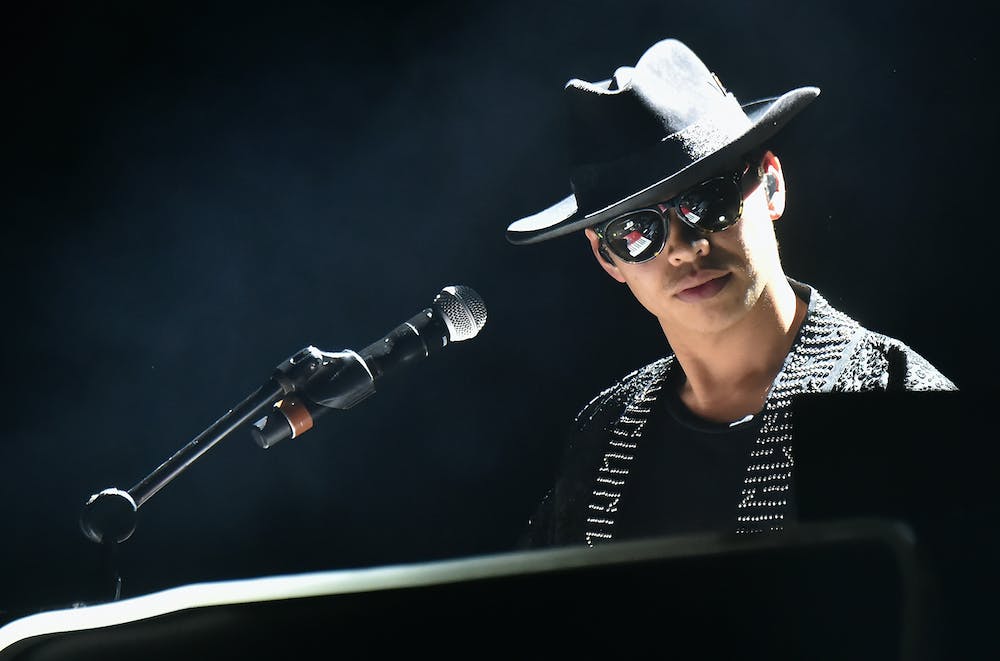 Follow Zhu to get alerts about upcoming events and special deals!

When the music starts, it's just drums and space.

Without further ado, here are Zhu top 10 tracks of all time:

When the music starts, it's just drums and space. A shuffling house beat with an eerie minor-key synth. Then a bigger kick drum locks in place and the arrangements come into focus, topped by a pitch-tweaked vocal, androgynous and eager: "Baby, I'm wasted, all I want to do is drive home to you."

That's the start of Zhu's 2014 single "Faded," and until recently, it was almost all the information we had from the young producer. No one knew the full name of the artist behind the project. There were no photographs or interviews, and his only other musical footprints were a clever Outkast mash-up, a brief digital EP and a tweaked-American-flag logo.

But that was enough to make him one of dance music's most coveted new artists.

Despite never having shown his face onstage, Zhu has already signed a major-label deal with Columbia Records, and "Faded" — with tens of millions of YouTube plays — is nominated for best dance recording at Sunday's Grammy Awards.

On Wednesday afternoon, Zhu and a half-dozen members of his label and management staff arrived at the offices of the Los Angeles Times for his first American interview and first photo shoot (he'd previously spoken once, for a few minutes, to the Australian radio station Triple J, which championed "Faded" there).For a producer who cultivated so much intrigue by disappearing, Grammy week will be Zhu's brightest spotlight yet. And he's finally, just barely, ready to talk about it.

The mood was friendly but watchful: less of a gabby meet-and-greet and more of a diplomat crossing borders to start peace talks.

This much Zhu confirmed: His name is Steven Zhu, he's 25, grew up in San Francisco but now lives in L.A., and he is the producer and main vocalist behind his tracks. (Zhu said that he got his musical start "writing for other people" but wouldn't say who and described the tracks' impact as "nothing big.") In person, he looks the part of a late-night house music artist on the upswing: Black sunglasses, black leather jacket, choppy black haircut and low-slung white T-shirt.

As might be expected, Zhu would much rather talk about songwriting and sound design than himself. It's an approach he finds more authentic than personal candor.

"This project is all about art, and we try to make it all about the songs and the response," he said. "Being able to have everyone focus back on music is the first step. But the second is to have influence and have people care."

Other mainstream artists (most recently the Weeknd) earned initial attention by cloaking their identities, but Zhu took this strategy to a level that rivaled Prince, who famously changed his name to a graphic symbol for a time in the '90s. Zhu's first visual gesture was an image of paint strokes, resembling a stylized U.S. flag with a "Z" in the star field.

"'Faded' hit at the pinnacle of the transition to underground house music, but Zhu went against the grain by making his music accessible everywhere while 'he' wasn't," said Senthil Chidambaram, the chief executive of the taste-making electronic music site Dancing Astronaut.

The slow reveal was, in part, the strategy of Zhu's manager Jake Udell of the firm Th3rd Brain and Zhu's indie label Mind of a Genius (Columbia Records executives declined interviews for this article, citing a busy Grammy week). But the aesthetic of the project and its marketing — shows announced on posters with just the logo and dates, tickets sold only through the New York high-fashion boutique Opening Ceremony — were pieces of an all-encompassing plan in place before Zhu ever signed to a major.

"When you see someone like Prince, they way he looks and behaves totally matches the music," Zhu said. "Great music always transcends, but artists have to create the space for fans to go beyond the music."

His goal for the "Nightday" EP was, as he put it, "to work on the dance floor, in the car and in the bedroom." As interest in the project swelled, however, he also had to figure out how to put it onstage. His first American live set would be before an estimated 40,000 fans (per night) at November's HARD Day of the Dead festival in Pomona.

It was a big endorsement from the agenda-setting festival, especially for an artist with almost no live experience. Zhu was billed just below genre superstars Eric Prydz and Deadmau5. He potentially could have wrecked his buzz in front of tens of thousands. But his set — for which he performed hidden behind silhouetted screens and ambient color projections — was the highlight of the festival.

"He delivered big time at HARD Day of the Dead in 2014," said Gary Richards, the DJ and concert promoter who booked Zhu at HARD. "Zhu is a true artist who is bringing an original style and concept to electronic music. We need more artists like him."

As Grammy night approaches, the question now is to figure how much of "him" Zhu is ready to reveal. Artists like Skrillex and Harris have earned Grammys and Top 40 success. But despite working in a relatively new genre (for the Grammys, anyway), those producers look and act like traditional pop stars. Zhu is something else: an Internet-beloved artist who is still unknown as a person. Even the Grammy-winning robots of Daft Punk were, a long time ago, known as Guy-Manuel de Homem-Christo and Thomas Bangalter.

"Today, kids want access to artists like they are their best friends, and the personality side is going to determine if he's going to be a great producer or a superstar," Chidambaram said. "He can be great in the studio, but to be a flagship guy for this movement in dance music, he's probably going to need to show more of his personality eventually."

That day may be Sunday — or not. When asked if he'll finally show his face on the red carpet at Staples Center, Zhu said he's not certain he's going to the ceremony at all.

"Maybe?" Zhu said, shrugging and grinning. It might not be time to break the spell just yet.