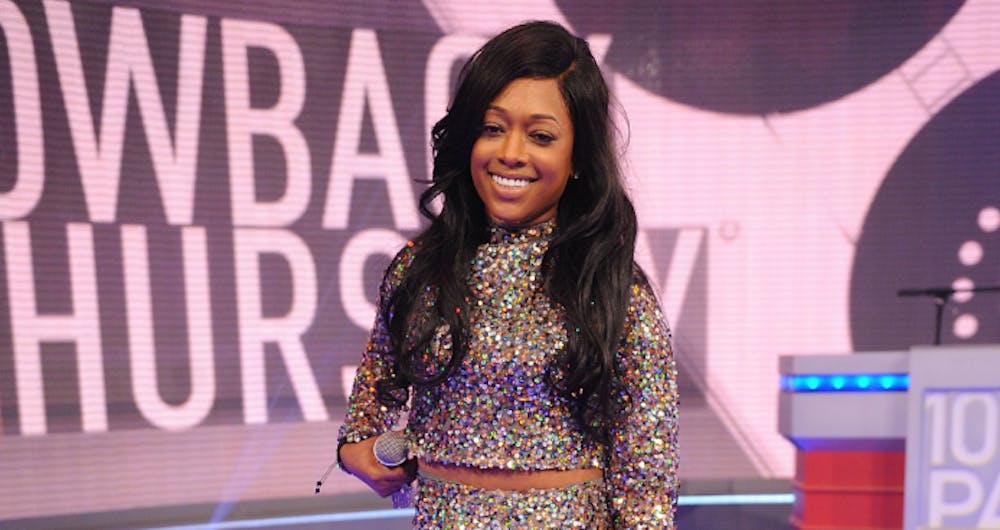 Follow Trina to get alerts about upcoming events and special deals!

1998–2000: Career beginnings and Da Baddest Bitch[edit]Main article: Da Baddest Bitch In her spare time, Trina wrote rap rhymes, which caught the attention of Miami rapper Trick Daddy whom then approached her in 1998 to be featured on his song "Nann Nigga".

Trina has played in major festivals like Lovers and Friends Festival

Without further ado, here are Trina top 10 tracks of all time:

In her spare time, Trina wrote rap rhymes, which caught the attention of Miami rapper Trick Daddy whom then approached her in 1998 to be featured on his song "Nann Nigga". The song was later released as the lead single from his second studio album,www.thug.com, which was released in September 1998. The single later became a hit as it reached number sixty-two on the US Billboard Hot 100 and number three on the Rap Songs chart. Thanks to the success of the single, Trina gained popularity and signed a record deal with Slip-n-Slide Records with distribution from Atlantic Records. Trina subsequently began work on her debut album.

In an interview for Crusade magazine online, Trina commented that on this album, much of the work was done for her; she did not have creative control, but simply delivered lyrics. "Everybody was like we got this beat, we got this, we got that, we want you to get in there and write to this track, write to this song, write to this topic."

On January 1, 2000, Trina's debut album Da Baddest Bitch was released.[10] The album debuted at number 33 on the US Billboard 200 and number 11 on the Top R&B/Hip-Hop Albums chart.[11] Da Baddest Bitch was certified Gold in November 2000 by the RIAA.[12]It stayed on the Billboard 200 chart for thirty -nine weeks and on the Hip-Hop/R&B album chart for forty-nine consecutive weeks.[13]

The album was preceded by the lead single "Da Baddest Bitch" in February 2000. The single failed to chart on any chart but the Hot R&B/Hip-Hop Songs chart, on which it reached number sixty-four. The second and final single from the album, "Pull Over", was released in June 2000 and became a mild hit as it reached number eighty-three on the Hot 100, number forty-six on the Hot R&B/Hip-Hop Songs chart and number forty-one on the Rap Songs chart.[14][15]

After promotion for her debut album ended in mid-2000, Trina began recording music with Missy Elliott to create her second studio album.[1] Recording sessions lasted from 2000 to 2002. Trina was able to choose her own production, name of the songs, and write whatever she wanted to write. She told TheCrusade.net, "It's more what Trina's about, how Trina looks, how Trina feels, the things that Trina consists of."[16]

On August 27, 2002, Trina released her second album Diamond Princess.[17] The album debuted at number fourteen on the Billboard 200 and number five on the Top R&B/Hip-Hop Albums chart. It sold 67,000 units in its first week.[18]

Trina also started her own record label, Diva Enterprises now DP Entertainment, and by September 2002 had signed an artist, Lil Brianna, who was nine years old and working on her first album. Lil Brianna had already appeared on the track "Kandi." Lil Brianna is now known as Brianna Perry who is now signed to Atlantic Records, Trina's now former label.

The album was preceded by the lead single, "Don't Trip", featuring Lil Wayne, in June 2005. The single wasn't largely successful, however, as it only reached number seventy-four on the Hot R&B/Hip-Hop Songs chart. The second and final single from the album, "Here We Go", featuring Kelly Rowland, was released in September 2005. The single reached seventeen on the Hot 100, number eight on the Hot R&B/Hip-Hop Songs chart and number three on the Hot Rap Songs chart. The single also reached the Top 20 in most countries worldwide, becoming Trina's first majorly successful single. The single was certified Gold in the US in June 2006.[12] In 2007, Trina left Atlantic Records and signed to EMI in conjunction with her original label, Slip-n-Slide Records.[21] In December 2005 Trina appears on the soundtrack of the film "Boss'n Up" with Snoop Dogg and Lil Jon.

In 2007, Trina began work on her fourth studio album. To give fans a preview of the upcoming album, Trina released two mixtapes: Rockstarr Royalty and the Baddest Chick 2: Reloaded. Both were largely successful, with the first being released in early 2007 and the latter being released in the fall of 2007. Trina originally planned for her fourth studio album to be released in February 2008, but the album was delayed by a few months in order for Trina to put "finishing touches" on the record.[22]

Trina's fourth studio album was preceded by the lead single "Single Again" in November 2007. The single reached number twenty-five on the Bubbling Under Hot 100, number fifty-nine on the Hot R&B/Hip-Hop Songs chart and number nineteen on the Rap Songs chart, becoming a mild hit. The second single from the album, "I Got a Thang for You", featuring Keyshia Cole, was released in February 2008 and reached number twenty-one on the Bubbling Under Hot 100 and number fifty-nine on the Hot R&B/Hip-Hop Songs chart, making it a fairly successful single. The third and final single from the album, "Look Back at Me", featuring Killer Mike, produced by Hard Hat Productions was a regional hit club record.

In 2008, Trina created the Miami-based female rap duo, Pretty Money, with members Nisha and An-G. The group was to be featured on Trina's fifth studio album, but this never came about. The duo has yet to release any music.[24] Following the creation of the group, Trina began work on her fifth studio album in 2009, and 2010.

Trina's fifth studio album, Amazin', was released on May 4, 2010. Amazin' debuted at number thirteen on the Billboard 200, number four on the Top R&B/Hip-Hop Albums chart, number two on the Top Rap Albums chart and number one on the Billboard Independent Albums chart. The album sold over 32,000 copies in its first week of release.[25][26] Despite its low sales, the album received near positive reviews from critics.

The album was preceded by the second single, "Million Dollar Girl" featuring Diddy and Keri Hilson, in January 2010. The single was very successful, as it reached number sixty-one on the Hot R&B/Hip-Hop Songs chart and number twenty on the Rap Songs chart. "My Bitches" was going to be released as the album's third single in July 2010 but its release was canceled. The album's third single, "Always", featuring Monica, was released in April 20, 2010 and has reached number forty-two on the Hot R&B/Hip-Hop Songs chart. A fourth single, "White Girl", featuring Flo Rida and Git Fresh, was released in June 2010 but failed to chart.

In preparation for her upcoming sixth studio album, Trina released a mixtape entitled Diamonds Are Forever on March 28, 2011.[27] Prior to the full release, Trina released three singles from the mixtape, which includes "Ghetto" featuring T-Pain, "Waist So Skinny" featuring Rick Ross, and "Can I" featuring Mýa. The mixtape was successful, receiving 4.8 million views in two days.[28] In a recent interview with MTVuk, Trina says that her sixth album is expected to be out by the end of the year and that there will be more pop/crossover music on the album.

Trina released a song called "Outerspace," which aired on an episode of June Ambrose's new show on VH1, Styled by June. "Outerspace" also features new pop artist Kid Cadet and is produced by Vinny Venditto, and a sneak peek of the "Outerspace" video will be featured on VH1′s Styled by June.

On Memorial Day 2012, Trina released "I'm Back (Back 2 Business)" via iTunes in preparation for another mixtape before her sixth studio album.[31]

On July 4, 2012, Trina released "Beam" via Twitter featuring GunPlay from Rick Ross label Maybach Music Group and Ice Berg, as well as a remix from her mixtape Diamonds Are Forever, "Bad Bitch", featuring Lola Monroe and Shawnna.[32] Trina stated that her highly anticipated mixtape Back2Business will be released on September 28, 2012, however on September 28 she announced that she has decided to release the mixtape on December 3 due to unknown reasons.[33]

Trina is a co-host on Tameka Cottle's late night talk show Tiny Tonight alongside singer/reality star Tamar Braxton, Claudia Jordan and Cottle herself. The show premiered December 17, 2012 on VH1.[34] Trina is set to be featured on Brianna Perry's upcoming vlog series, Girl Talk.[35] Trina released the new single for her sixth studio album on September 15, 2014, the track is titled "Fuck Love" which peaked at #1 on "Billboard's Trending 140" and #34 on iTunes Hip-Hop/R&B charts.

On March 3, 2015 Trina released "Real One" featuring Rico Love which later went on to peak at #1 on "Billboard's Trending 140." On March 9, 2015 Trina revealed that she is now signed to Penalty Entertainment and will release her new album in December on the label.[36] In late June 2015 Rico Love announced that he would be the executive producer for Trina's sixth studio album during a behind the scenes trailer for Trina's "Real One" music video. Trina previewed the video for "Real One" on Love and Hip Hop Afterparty on July 21, 2015.[37] The following day it was released officially on VEVO. Since, Real One has peaked at #98 on iTunes Hip-Hop/R&B chart.

On September 22, 2015 Funkmaster Flex announced the news concerning Trina's sixth album via InFlexWeTrust.com. Trina's upcoming album is entitled '6' representing the number of albums she's released throughout her career.[38] On October 25, 2015 Trina's upcoming album '6' was announced for 2016 via Twitter.[39] October 29, 2015 Wolfgang Gartner announced his record "Turn Up" featuring Trina and Wiley would be featured on the upcoming soundtrack for video game Need For Speed.[40] On November 13, 2015 Trina released her single "Fuck Boy" along with a remix of One Direction's "Perfect," both which spawned very positive reviews. [41][42][43]

On March 21, 2016 the 16th anniversary of her debut album 'Da Baddest Bitch' Trina released a single entitled 'Overnight' discussing the ups and downs of her career including people only viewing her as a pretty face, lawsuits along with label issues that she initially had to deal with through it all. [44]

Trina released her video for 'Forget That' featuring Steph Lecor from the Meet the Blacks soundtrack on April 1, 2016. Within 1 hour the video peaked at #13 on iTunes Hip-Hop/Rap charts.[45]