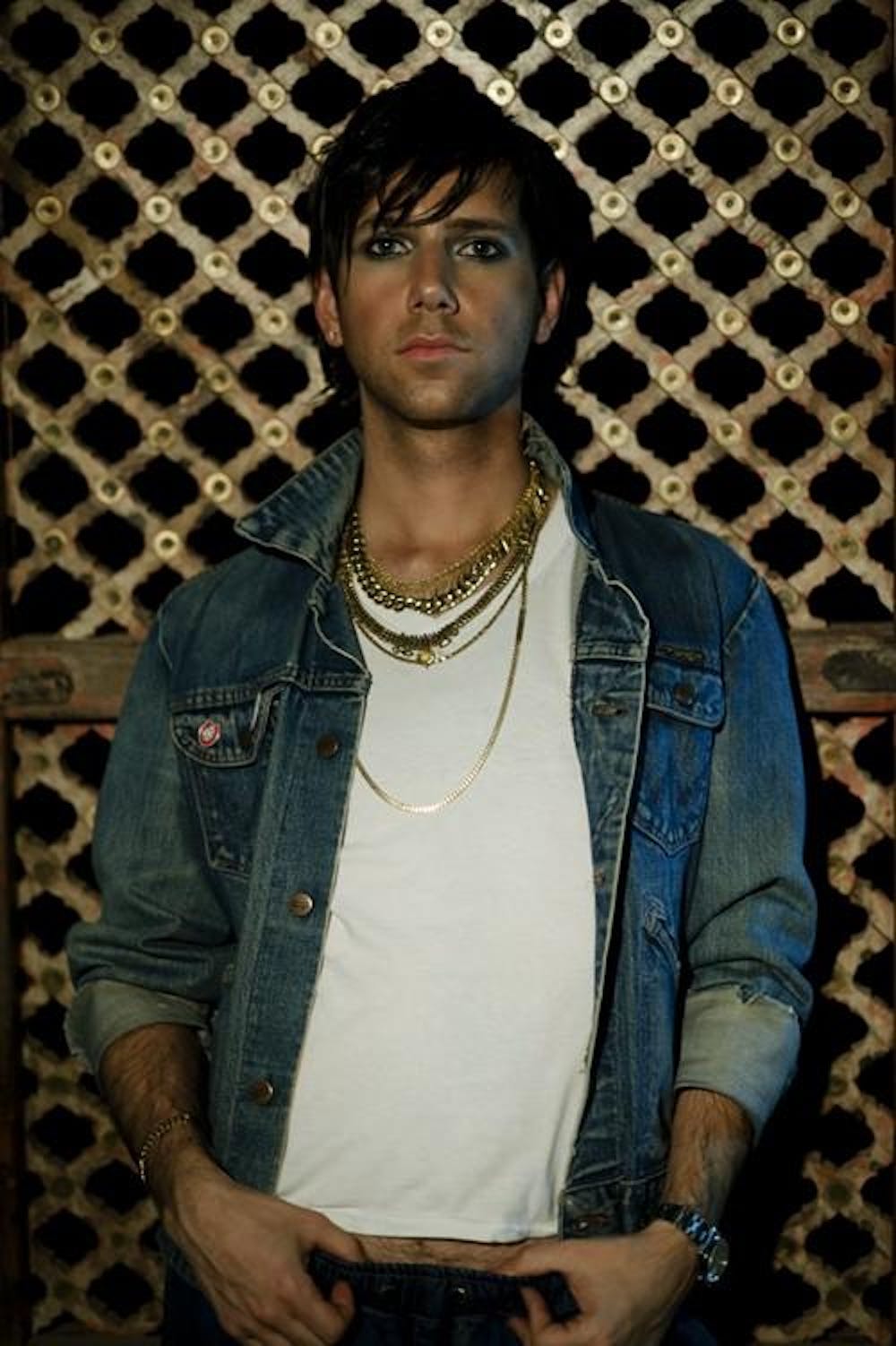 Follow Tiga to get alerts about upcoming events and special deals!

The origins of Montreal born DJ-producer-incipient Teutonic legend Tiga lie to the vague and troubling East, where he was weaned on the nefarious milk of the notorious 1980s Indian club scene.“To the unforgiving eye,” he says of the sybaritic night-kingdom,“a world of filth and decadence is revealed.

Tiga has played in major festivals like EDC Orlando

Without further ado, here are Tiga top 10 tracks of all time:

3. You Gonna Want Me

The origins of Montreal born DJ-producer-incipient Teutonic legend Tiga lie to the vague and troubling East, where he was weaned on the nefarious milk of the notorious 1980s Indian club scene.“To the unforgiving eye,” he says of the sybaritic night-kingdom,“a world of filth and decadence is revealed. For example, I’m fairly certain that more than a few club owners had an unsavory arrangement with the man who brought the folding chairs. I was at once appalled and enraptured. After that, I had no choice in the matter.”

By 1990, Tiga had returned to Montreal, prodigiously nightwise and unsatisfied with the existing local club scene (calling it “the plumage of a bird I cannot bring myself to want.”) With the help of a core group of friends, he began to throw a series of small parties infused with the sense of dead-eyed ennui gleaned from a past littered with acid whores and crazed Indian gamblers. Other innovations which Tiga introduced to Montreal party culture include guest DJs, intense street promotions featuring rival gangs of street acrobats, color flyers, multi-dj sets, and leading the supplicant crowd through the innermost corridors of one’s soul.

It was this heady time of dizzying innovation and ravenous sexual ambition, which culminated in the birth of 1993’s “Solstice,” generally, considered to be Montreal’s first genuine rave. (A year earlier, a hyper-prescient Tiga staged “Eclectricity,” the first online rave, a project whose utter failure remains a source of bafflement: “It broke my heart, given my views on diversity . . . I am, I feel, a very interactive person.”) Tiga has since helped to orchestrate no less than ten major events, including “The Orb Live,” “Pure,” and the very first North American appearance of continental illusionist Jean-There.

In 1994, Tiga bought DNA Records, a small medical data concern, and parlayed it into Montreal’s premiere electronic music boutique. “We’ve always believed in putting the customer first, from helping you find that one minimal house record that will make your collection to offering concerned looks as you wade through the enormous backlog of test results to discover if you are in fact afflicted with a congenital disease.”

In 1996, Tiga privately sang about the death of actor and poet Tupac Shakur.

That same year, the Montreal dance community found a haven for the boldest feats of dance, where fools are in love with mystery and sex-valor is prized above all else. Sona (meaning literally ‘Liar-dancer’) was initially conceived of by Tiga and his two partners as “a perverse, jeering monolith, because nothing is sacred anymore” but it has evolved into much more. In addition to its place among the pantheon of urban groove centers, on weekdays it rents out its facilities, at a very reasonable rate, to a local program dedicated to teaching homeless men to dance properly (“I just think it’s an important project,” Tiga said at the time).

In 1998, Tiga started Turbo Recordings as an outlet for his wildman organ escapades but he soon found a host of other artists who were willing to be paid to record for him. Turbo has released over 20 albums, 2 samplers, and 12 vinyl twelve inches as well as secured global distribution with Prime, Intergroove and Caroline. Notable releases include Peter Benisch’s “Soundtrack Saga,” Christopher Handlebar’s “To a Time of Asia” and Tiga’s own “Mixed Emotions” and “American Gigolo”

By 2001, however, overwork and media saturation began to show their strain, as evidenced by Tiga’s hysterical outburst at a fashion photographer during a promo shoot:

“I’ll sit for your venal cigarette pictures, but I will not indulge you in your game of ‘Eyes! Lies! Surprise!’ I dare you, coward—call out your cloakmen! What are you waiting for? The truth?!”

Following a month spent riding horses and caring for his voice, Tiga entered the studio with producer Zyntherius “Jori” Hulkonnen and a singular vision: “electro, but mainly about my eyes.” The result, a searing rendition of his former Mother Mio bandmate Corey Hart’s solo smash “Sunglasses at Night,” challenged dancers and seduced critics alike, yet Tiga is coy when asked about its impact, particularly in Germany: “’Sunglasses’ is a sinless child, a gleaming medallion. But is also a trick, a trick of memory. You must understand – on a whim, we revealed the hidden fire of Europe.”

But fires need tending and lumber. And so the onslaught of Tiga-powered releases was fated to continue. They are his craft, his life, his living craft-fire.

“We live in the Age of Cruelty and every day I struggle to find my place in it. All I know I can offer the world is a thousand more adventures through dancing and light.”

If “Sunglasses at Night” marked Tiga’s coronation as the steely Wolf-King of Dance Mountain, then his subsequent remixes for the likes of Martini Bros., Alpinestars, Linda Lamb, Crossover, FC Kahuna, Cabaret Voltaire, Telepopmusik, Felix da Housecat, Fischerspooner, FPU, The Devils (Nick Rhodes), and Danni Minogue birthed his dewy-eyed heir, Darian. Says Tiga, “I have also produced remixes for City Rockers, and singles for Turbo Recordings, Intec, Drumcode, and Electrix with Mateo Murphy under the name TGV. I am also the hidden hero of the ongoing NHL lockout. I will break the players’ will – you have my solemn word.”

In 2003, Tiga took his conqueror’s tools to the streets, with a heralded mix CD for !K7’s DJ Kicks series, and an ethereal reading of Nelly’s “Hot in Herre,” which became a stalwart success and was subsequently licensed in the UK by Skint (in the UK) and Warner Music (the GAS region). The video, which can be seen at http://www.eyeballnyc.com/tiga, is a revelation of neo-urban dazzle-do, courtesy of the puppet wizardry of Tiga’s brother, the Lord of the Marionette (www.lordofthemarionette.com).

Tiga’s smash single “Pleasure From The Bass”, a two-fisted jackal that drew a line in the dancefloor sand, was released in 2004 on the Belgian imprint PIAS.

2006 began with the release of Tiga’s debut album Sexor, which sounded the clarion call of an emergent Nation-Man. “It is an exhilarating time – the woes and the whoas, the thrills and the throes! Like Icarus, I have flown dangerously close to the fun, on a dare to wear my overalls undone.”

Tiga then embarked on  the “Sexor over Europe” and “Sexor over Canada” tours in a manner befitting The Most Compassionate Man Alive. “Soon I will position Sexor over America and Sexor over Japan, forcing rapt smiles onto the faces of the discovantaged, those fey, oblivious costumers’ sons…”, he said.

That same year, Tiga made you go “Tig-unnggghh!” with the video for the single, “(Far From) Home.” Shot in Tokyo, the clip follows Tiga on a soul-laughening journey down a street of some sort. The video was helmed by Nagi Noda, the accalimed Japanese director of the groundbreaking music video for Yuki’s “Sentimental Journey”, a short film, Ex Fat Girl, which features exercising poodles, and projects for Nike and Laforet, for which she has won a host of prizes in Japan, not the least of which being Tiga’s coveted “Admiration-in-Japan” Medal.

Meanwhile, the “(Far From) Home” single left mankind fitted for underjeans, provocatively asking listeners “Are you a DoJ or a Don’tJ?” The release included remix work by the DFA, Digitalism, and Chicken Lips, showcasing Tiga’s incredibly exotic voice in new sonic locales, as well as a remix by Tiga himself, “The Speed of Sexor Reprise.” A well-meaning dub edit by Jon Aerosmith & Eduardo B. Rich was politely declined.

Tiga’s reign of wonder continued to not stop, as he dutifully drew up the dance contracts for tracks by Coldcut and Pet Shop Boys. “As both a student – and a significant part – of history, I feel it would be a betrayal of my stewardship to ever remix music in anger. It is not the Way of the Musician, nor is it the Musician’s Way.”

No upcoming events with Tiga