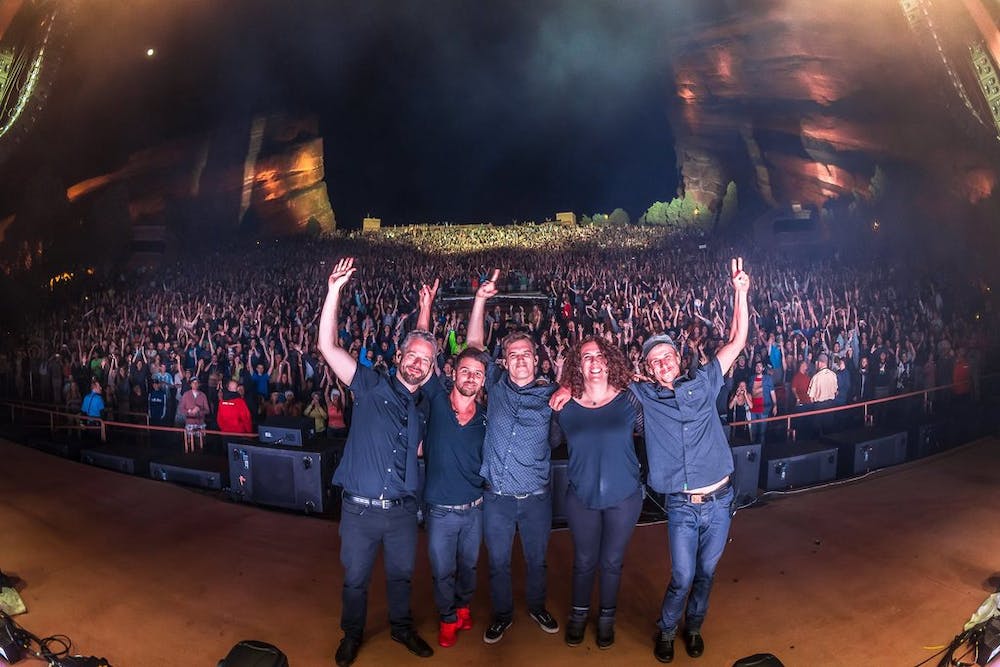 Follow STS9 to get alerts about upcoming events and special deals!

The past two years have been nothing short of amazing for STS9 (Sound Tribe Sector 9).

STS9 has performed in venues such as: Red Rocks Amphitheatre, Same Same But Different Festival, The Wiltern

Without further ado, here are STS9 top 10 tracks of all time:

3. When the Dust Settles

The past two years have been nothing short of amazing for STS9 (Sound Tribe Sector 9). The band released two albums on their independent 1320 Records, Artifact and Artifact: Perspectives to critical acclaim and commercial success such as inclusion in iTunes' "Best of 2005". The band also released the 1320 MixTAPE as well as a live concert DVD titled Live As Time Changes that earned them a great deal of nods in the press including Urb Magazine declaring it "FOUR STARS!" On the touring front, ticket sales for the band's undeniably stellar live shows increased dramatically and earned the band a spot on Pollstar Magazine's PULSE charts as the #29 touring artist in the country for their Artifact tour and #30 for their Perspectives tour. The band played over 150 shows including appearances at Lollapalooza, Bonnaroo, Winter Music Conference, the Vegoose Festival and a sold out headlining show at Colorado's Red Rocks Amphitheatre. The band toured Japan and Europe in 2005 and 2006 as well.

The press accolades for STS9 have been countless. XLR8R proclaimed "...this unique collection of artists and musicians has become one of the country's most intriguing, innovative outfits around," Remix Magazine announced "This band is making electronic music relevant again, and people from all over the musical map are taking notice, as they did when such acts as Chemical Brothers and Prodigy brought something new to the table back in the 90's." Both of STS9's studio albums released in 2005, Artifact and Artifact: Perspectives, saw a considerable amount of critical acclaim. Regarding Artifact, Amplifier commented, "...proof positive that technology and soul can work together in a single musical form without sacrificing the personality of either in the process." Pitch Weekly urged "Don't wait until the end of the year for critics to tell you that STS9's latest album, Artifact, ranks up there with feed-your-head classics from Floyd and Radiohead." In regards to the live show, DRUM! Magazine may have summed it up best when they urged "catch STS9 live and bring a bandage for when your chin hits the floor."

STS9 combines varied musical influences, genius live instrumentation and the latest in music technology. As Electronic Musician described, "STS9's music is an eclectic stew of electro-acoustic pop, funk, drum 'n' bass, hip-hop, ambient, dub and, and more ... integrates rhythm-section instruments with samplers, drum machines and soft synths." This unique blend of musical angles has earned the band and its music numerous features on television and radio, notably CSI and NPR's "All Things Considered." Another benefit of STS9's incredibly diverse music is the artists who want to share the stage with them. The past year alone has seen such acts as Jurassic 5, Tortoise, Digable Planets, RJD2, The Brazilian Girls, Prefuse 73, Blackalicious, Soulive, Cut Chemist and Xavier Rudd support STS9 across the country.

Always wanting to give back to the community, STS9 have been endlessly devoted to their humanitarian efforts. They work closely with Conscious Alliance and organize food drives for the hungry at every show they play. The band often play benefit concerts as well, helping the Hurricane Katrina victims by raising over $20,000 as well as supporting programs like Mariposa's Art in Northern California, helping to raise $10,000. The bands 2006 Live As Time Changes tour raised nearly $20,000 alone with a per ticket fee that was dispersed to a handful of organizations including Habitat for Humanity's New Orleans project and the Jef Jel Foundation's drive to help third world villages gain clean water access.

STS9 recently wrapped up their 2006 touring season with sold-out shows averaging 1,000's per city in San Francisco, Portland, Seattle, Denver, St. Louis, Minneapolis, Chicago, Washington DC, Las Vegas and dozens more. The band wrapping up 2006 in Atlanta with nearly 8,000 fans celebrating New Years Eve. Obviously, the future is sure to bring the band to bigger and better venues to accommodate their ever-growing fan base and live production. In response to the demand of their live performances after the fact, STS9 launched STS9Music.com in 2005, a digital download site that releases dozens of shows per tour that has seen 1,000's upon 1,000's of high quality soundboard recordings downloaded just days after each event. The band also releases a number of shows from their archives as well as original tracks via STS9Music.

Fans of STS9 can look forward to continued touring in 2007, a long awaiting studio album and numerous film and TV projects.