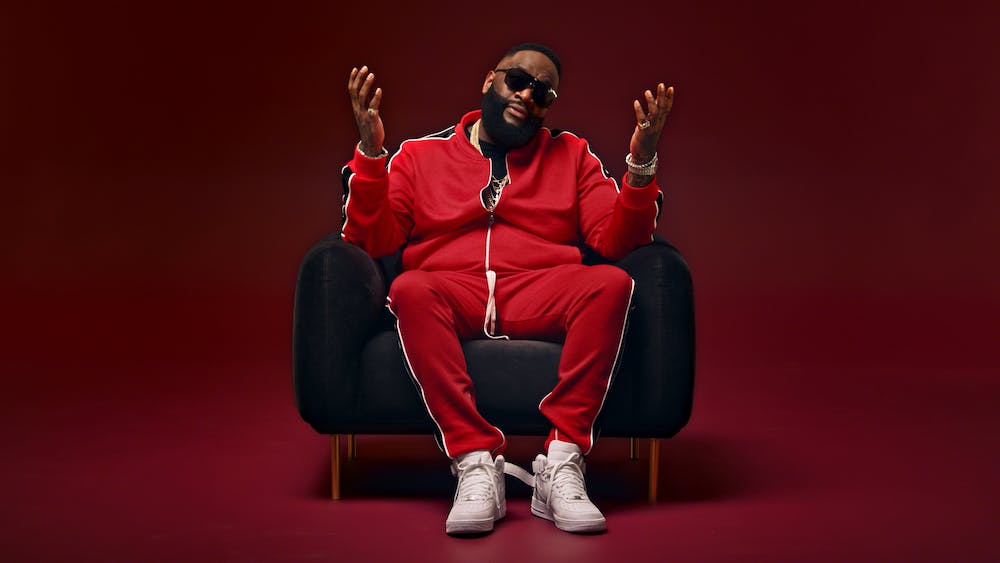 Follow Rick Ross to get alerts about upcoming events and special deals!

“Both physically and culturally very large …his voice sells, the way Sinatra once sold an implacable but supple kind of confidence...Ross’s confidence can transfer easily to anyone’s inner life, with a little suspended disbelief, and that makes him a kind of motivational speaker.

Rick Ross has played in major festivals like Rolling Loud

Without further ado, here are Rick Ross top 10 tracks of all time:

“Both physically and culturally very large …his voice sells, the way Sinatra once sold an implacable but supple kind of confidence...Ross’s confidence can transfer easily to anyone’s inner life, with a little suspended disbelief, and that makes him a kind of motivational speaker. Feel as much like Ross as he does, and you become your own boss.” – The New Yorker

“You can't listen to any station that plays hip-hop for an hour and not hear a Rick Ross song... he is at the very pinnacle of street. He has started to exhibit the signs of mainstream iconic status—appealing to the full spectrum …Three of his last four albums have debuted at no. 1 on the charts. If his new record, God Forgives, I Don't, doesn't follow suit, it will shock everyone in the music industry who knows anything.” - GQ

“Believe it or not, it's been two years since Rick Ross's last solo album Teflon Don hit stores. Since then, his stature in the game has grown exponentially, with the growth of the Maybach Music Group brand, his epic Rich Forever mixtape-arguably the best rap album of 2012 so far-and a handful of stellar guest appearances. God Forgives, I Don't will likely determine Rick Ross's place in hip-hop history. The smart money says that Rick Ross will continue the growth curve he's exhibited with his first four releases-but expectations are higher than ever. If this record does what it's supposed to do, the Bawse will perfectly positioned to stake his claim as one of the greatest who ever did it.” - Complex

(May 15, 2012 – New York, NY) Weeks ago, hip-hop’s elite gathered in a mid-town Manhattan hotel ballroom around the genre’s reigning boss - Rick Ross – in a show of unilateral respect and branding force befitting a man of his burgeoning stature. The occasion: the announcement of a July 31st release date for the most-anticipated album of 2012, Ross’ long-awaited God Forgives, I Don’t. Ever the consummate business man and boss, Ross used the occasion to promote upcoming releases from his growing Maybach Music Group empire; Self-Made 2, the solo debut from Meek Mill, and more.

Though his past four solo albums have debuted at #1, in the past year Ross’ stock has risen faster than ever. The arrival of his instant-classic mixtape ‘Rich Forever’ – a self-released behemouth that some are calling the best rap of the year thusfar – and the constant barrage of new material, features and online content that he and his MMG cohorts flood the streets with daily, has taken Ross to a new level.

"We believe that Rick Ross is among the elite; one of the most talented and compelling artists in the industry," said Def Jam Recordings president Joie Manda. "He's done an amazing job of building his brand and image, and together with Def Jam's promotional muscle and marketing savvy, we intend to elevate Ross' stature across the board. It's an exciting time to be in the Rick Ross business."

"There's Jay-Z, Kanye, and Wayne—and Eminem is the king of his own domain," Rap Radar’s Elliott Wilson recently told GQ. "And then there's Rick Ross, right on that cusp."

Not content with the cusp, and thoroughly determined to dominate the conversation, Ross has bossed up and partnered with the superstar Usher for his new single “Touch’N You.” Released to radio and online yesterday, the Rico Love-produced banger is the lead single from ‘God Forgives,’ and sets the tone for what will be Ross’ most epic, most ambitious album to date.

“Before I was ever in this position, I promised myself I would never take it for granted,” Ross told the expectant crowd gathered at his Manhattan press conference. “So that’s what I did with this project…it’s my best body of work yet. God Forgives, I Don’t is a very dark story…it’s extremely lyrical. The music is next level. I’m expecting nothing but the biggest results. That’s what’s needed, and I’m going to deliver”

Stay tuned for more on hip-hop’s biggest boss, Rick Ross, and the most-anticipated album of the year…God Forgives, I Don’t.