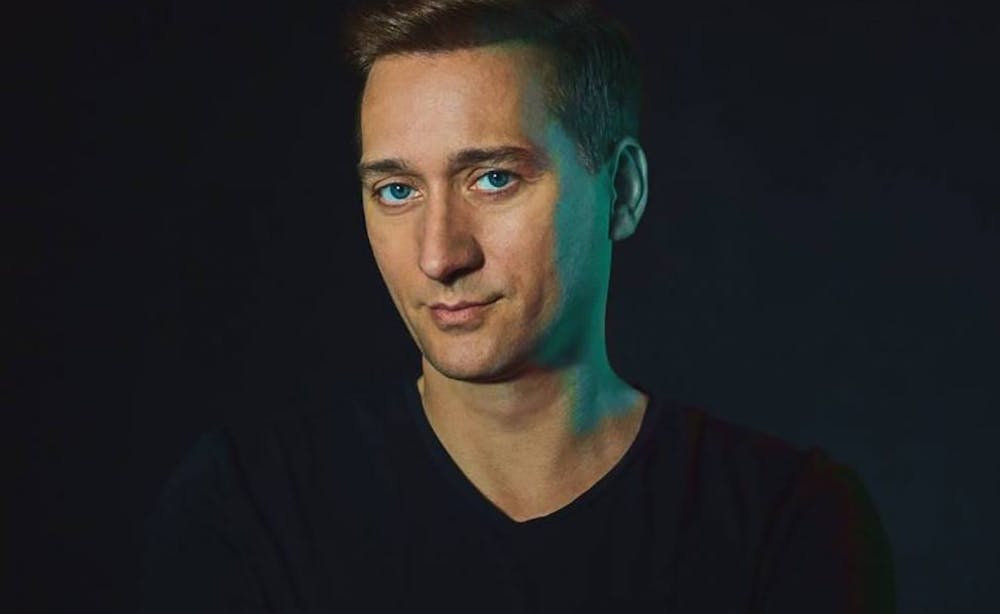 Follow Paul Van Dyk to get alerts about upcoming events and special deals!

The story of Grammy-nominated DJ, producer and scene-starter Paul van Dyk doesn’t begin in the 1991 techno incubator of Tresor, the 1995 Twilo-era Manhattan or the 1997 superclubs in Ibiza or London… It begins in 1985 and in his mom’s kitchen.

Without further ado, here are Paul Van Dyk top 10 tracks of all time:

2. For An Angel - PVD Angel In Heaven Radio Edit

6. Nothing But You (feat. Hemstock & Jennings)

8. While You Were Gone

The story of Grammy-nominated DJ, producer and scene-starter Paul van Dyk doesn’t begin in the 1991 techno incubator of Tresor, the 1995 Twilo-era Manhattan or the 1997 superclubs in Ibiza or London… It begins in 1985 and in his mom’s kitchen. It was there in Communist East Berlin that Paul van Dyk first caught the sounds of synthesised music broadcast over the West’s radio waves. It was among the most auspicious of meetings and its effect is difficult to overstate, having shaped the course of electronic music’s history for more than twenty years.

From the earliest ignition points of ‘For An Angel’, ‘Perfect Day’ and his ‘Age Of Love’ & ‘Love Stimulation’ remixes to 2015’s singles ‘Guardian’ & ‘Louder’, PvD’s gone from trance music’s standard-bearer to its most abiding & respected influence. He’s been deemed a ‘musical pioneer’ throughout his career with designations ranging from ‘originator’ to ‘icon’ and descriptions including ‘humanitarian’, ‘pacifist’ and ‘altruist’.

Onstage: A performer with a natural and instinctive stage touch, Paul circles the globe 16 times a year, entertaining club and festivalgoers numbered in the millions. On Rio de Janeiro’s Barra Beach during the 2008 New Year’s celebrations, he performed to an unprecedented (and then record-setting) audience totalling nearly 1.5 million people. Over the last five years, Paul has moved away from being a conventional ‘mixing-two-tracks’ DJ towards creating a hybridized live-on-stage, concert-like approach to his shows.

2016 marks the 17th year for PvD’s shows at Cream Amnesia in Ibiza, constituting one of club history’s longest-standing residencies. In 2010, van Dyk commemorated the 20th anniversary of the fall of the Berlin Wall and staged the We Are One event at the O2 World Berlin Arena which drew a 17,000-strong crowd and featured Armin van Buuren, The Blueman Group and Underworld on the bill. van Dyk has since hosted We Are One day-long outdoor festivals in 2013 and 2014 at the city’s historic Zitadelle Spandau. The 2015 edition featured a sunset-to-sunrise concept at Rummelsburg, a unique beach location in Berlin.

The Musician: As a music producer, Paul’s achieved comparable success to that of his onstage career. In 1994, he produced ‘For An Angel’, a track hailed by Mixmag as the 8th Greatest Dance Track of All Time two decades after it was recorded. In 1997, he remixed ‘Age of Love’ – a record that also regularly tops electronic music’s greatest-ever lists. The UK’s DJ Mag described PvD’s ‘Guardian’ release as “a surprising, listen-without-prejudice milestone”, rating it 9.5/10. ‘Come With Me’ – the anthem for 2014’s We Are One Festival (recorded alongside Ummet Ozcan) met similar praise from Mixmag. The electronic music bible said the track had “natural note arrangements”, featured “straight-to-the-heart-pianos” and (giving it 9/10) a “lightning strike of a riff”.

Remixer: Paul has also continued to build upon one of electronic music’s most-outstanding remixographies. His highly recognisable hallmark sound has been used to club-interpret mainstream music superstars like Madonna, Justin Timberlake and Britney Spears. He’s also remixed releases from acts like metal rockers Rammstein; timeless bands including U2, Depeche Mode and New Order; and cult electronic music artists like Deep Dish, BT, Faithless and Underworld. van Dyk has been – and continues to be – a regular film- and game-score contributor, resulting in numerous notable OST credits including his rework of Hans Zimmer’s ‘A Poor Choice of Words’ for The Dark Knight and ‘Still Alive’ for EA’s ground-breaking game Mirror’s Edge.

Album Releases: van Dyk has a career-long history of releasing acclaimed albums. 1994 met his debut 45 RPM, followed by Seven Ways in 1996 and Out There And Back in 2000. The 2003 release of Reflections granted him the first-ever Grammy nomination to an artist in the then-new Best Dance/Electronic Music category. In Between followed in 2007 and 2012’s EVOLUTION saw PvD personally recategorize his studio work to the stylistically more-inclusive “electronic music”, achieving significant critical and commercial success. EVOLUTION was rated 6/6 by Raveline, the magazine commenting, “this evolution seems to be almost perfect”. Mixmag scored the release 9/10, observing that van Dyk had “achieved evolution in both name and nature”, while DJ Mag called it “impressive” and “multidimensional”. His albums have collectively sold in excess of 3 million copies.

In 2015, Paul van Dyk released his seventh full-length album The Politics Of Dancing 3 – a self-described ‘heritage’ album which “closes the first Politics loop” (started by the release of the first Politics of Dancing mix-compilation in 2001) and is “collaboration-centric” in nature. van Dyk has long been politically active in many fields and clarified during a 2006 interview that the Politics referred to in his album titles were “the politics of diplomacy”. He had previously observed at his shows “Palestinians dancing with Israelis, Lebanese people dancing with Israelis – without war, without anything in their minds other than treating each other respectfully. To me, only dance music has this power to reconcile the historic divisions of the planet like this”.

Early History: van Dyk was brought up in East Germany – an experience that left a profound impression on him… “Behind the Iron Curtain, I felt that everything that I had to be strive to achieve in difficult circumstances – I value that much more now. That’s nevermore the case than it is with music. Growing up, I listened to radio stations transmitting from West Berlin. It became the only way to connect with the outside world and a freer society. As such, music had, and continues to have, the greatest possible resonance for me, and on my life.”

After a brief residence in Hamburg, van Dyk returned to Berlin at the start of 1991. He made his first behind-decks appearance in March that year during the opening month of the soon-to-be-illustrious Tresor. From there, Paul began to build an onstage and studio career which, by 1997, saw him reach dance music’s highest echelon. As the twin phenomena of superclubs and the DJ-as-a-Rock-Star arrived, he found himself not only synonymous with them, but he was elevated as a figurehead for the trance scene at large. van Dyk has since held sway over floors in every dance music-speaking country in the world. He holds the record for the longest unbroken run inside the ranks of the world’s Top 100 DJs chart; has twice reached the no.1 position and in 2013 was aggregated, vote-for-vote, year-for-year as the poll’s single most successful and enduring DJ.

Label Owner: As the owner of VANDIT Records, the last 15 years have seen Paul use his label dais to break the productions of those musically akin. In its early years, VANDIT released music by Armin van Buuren, Giuseppe Ottaviani, Agnelli & Nelson, Thrillseekers, Alex M.O.R.P.H., Nu-NRG and others. It’s lately focused on breaking newer talent, with acts like Chris Bekker, Las Salinas and Ben Nicky on its A&R roster.

PvD Radio Shows: A child of the radio generation, Paul was one of the first DJs to recognise and fully harness the medium to spread his sound. His long-running VONYC Sessions show is now broadcast on over 90 terrestrial and digital stations around the world, including iHeartRadio’s Evolution channel.

Awards: Throughout his career, van Dyk has garnered in excess of 60 international awards for a myriad of activities. Among those are the illustrious Landesverdienstorden (Berlin’s Medal of Honour, given in recognition of his work towards social justice), a string of IDMA awards and Mixmag’s Man of the Year accolade. In 2014, he received MTV’s prestigious Chiuku award, previously received by such artists as Shakira, Nelly Furtado, Eva Longoria and Morrissey. In 2015, PvD won Mexico’s Lunas del Auditorio award for Best Electronic Music Live Artist.

Political & Social Concerns: van Dyk dedicates considerable effort to several philanthropic endeavours. Among them are his Berlin-based Rückenwind (Tailwind) charity, which seeks to maintain a thirst for knowledge in underprivileged children, the Indian-based Akanksha Foundation, the FEED project and the Peace One Day movement. He is also well known for his longstanding political involvements, specifically for his dedication to anti-war movements and organizations like Rock The Vote.