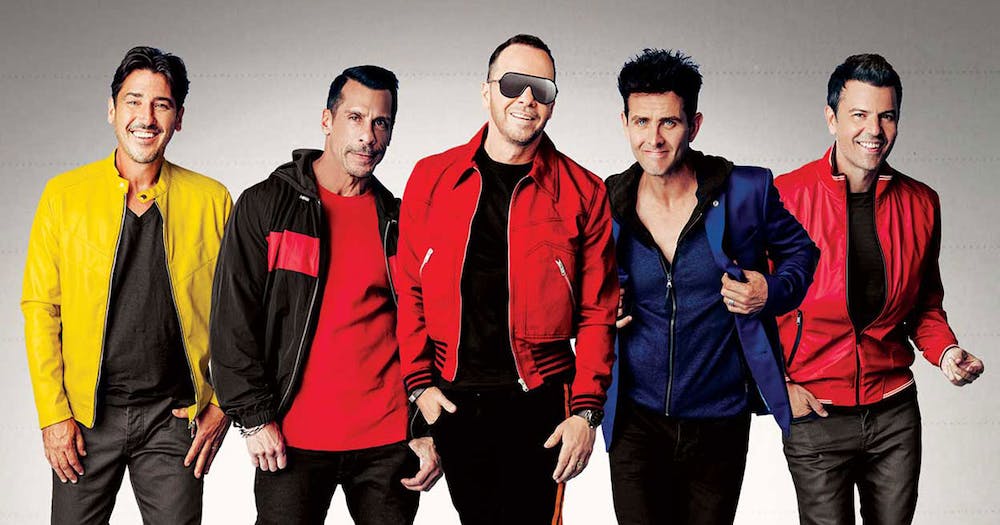 Follow New Kids On the Block to get alerts about upcoming events and special deals!

NKOTB are Jordan Knight, Donnie Wahlberg, Joe McIntyre, Danny Wood and Jon Knight. The Ones That Got Away Some 500 guys auditioned to join NKOTB including two of Donnie's friends (Chris Hasberg and Edward Russell) but were considered unsuitable.

New Kids On the Block has performed in venues such as: Fenway Park

New Kids On the Block has upcoming events in Fenway Park

Without further ado, here are New Kids On the Block top 10 tracks of all time:

New Kids On the Block, Ne-yo

New Kids On the Block Details

The Ones That Got Away

Some 500 guys auditioned to join NKOTB including two of Donnie's friends (Chris Hasberg and Edward Russell) but were considered unsuitable. A third friend (Peter Fitzgerald) was pulled out because his mother wanted him to concentrate on school. Mark Wahlberg was also a one-time member of New Kids On The Block but was never really interested and quit shortly after joining.

The first recruit was Donald E. Wahlberg from Dorchester, Massachusetts. In Donnie Mary and Maurice saw the perfect recruit. He was a rapper, a singer and a break-dance, all the ingredients to make him a good all-round entertainer. He also came across as very enthusiastic and keen.

Jamie Kelley appealed to Maurice because like Donnie he was a rapper and a break-dancer.

Jordan Nathaniel Marcel Knight appealed to Maurice Starr because he was a great singer as well as a dancer. With his looks, charm and falsetto voice Jordan Knight would become the most popular and well-known member of New Kids On The Block.

Daniel Wood was known for known for his dedication, self-discipline and stubborness which would help see him through the negative patches in his musical career.

Jonathan Rashleigh Knight (Jordan's older brother) was considered an unlikely choice because he seemed more interested in gardening than music. He was also very shy. His well-trained voice, through his years of participation in choir singing, appealed to Maurice Starr.

Maurice Starr now had the recruits he wanted and his new group, modelled on New Edition was now complete.

However, Jamie Kelley was not to remain in the group. He began drinking heavily and missing practice sessions.

In 1985 Jamie was dismissed and a replacement for him was found in Joseph Mulrey McIntyre. In Joe Starr saw cuteness (he was only 12 years old when he joined), a good singer, dancer and entertainer. His own inner strength would see Joe through the initial rejection that he would experience by the other other guys, who resented him replacing their friend Jamie Kelley.

In 1986 the group was given the name New Kids On The Block and signed up with Columbia Records. Their first album, self-entitled "New Kids On The Block", bombed. However, Columbia had enough faith in them to allow them to sign NKOTB up for a second album, "Hangin Tough".

In 1998 when Tiffany did her first major tour, she chose New Kids On The Block as her opening act. While touring with her the New Kids enjoyed their first top 10 hit with the track "Please Don't Go Girl". They went on to enjoy success after success throughout the U.S. and the rest of the world. They became the first 'teen' group in history to achieve four top ten hits from one album in the U.S.. Then their fifth single "Cover Girl" also went top ten, lengthening their achievement record. Their pay-per-view special was the biggest in cable TV history to that date.

In the U.K. they enjoyed seven consecutive top ten hits in 1990. They were the first American group to achieve six consecutive top five hits in Britain. They also performed 14 shows in London's Wembley arena in 1991, most of which were sold out.

However, their busy schedule was to have it's toll on the group. In the words of former member Joey McIntyre, "we burn't each other out." In 1994 they agreed to split up on amicable terms.