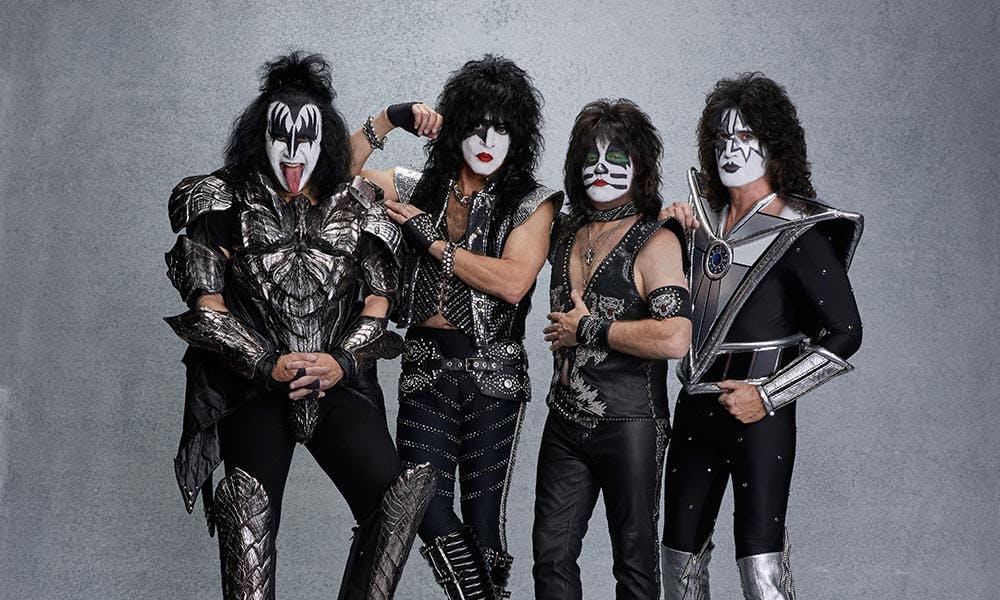 Follow KISS to get alerts about upcoming events and special deals!

KISS has played in major festivals like Aftershock Festival, Louder than Life, Summerfest, Welcome To Rockville

Without further ado, here are KISS top 10 tracks of all time:

2. Rock And Roll All Nite

Kiss (often stylized as KIϟϟ) is an American rock band formed in New York City in January 1973 by Paul Stanley, Gene Simmons, Peter Criss, and Ace Frehley. Well known for its members' face paint and stage outfits, the group rose to prominence in the mid-to-late 1970s with their elaborate live performances, which featured fire breathing, blood-spitting, smoking guitars, shooting rockets, levitating drum kits, and pyrotechnics. The band has gone through several lineup changes, with Stanley and Simmons being the only members to feature in every lineup. The original and best-known lineup consisted of Stanley (vocals and rhythm guitar), Simmons (vocals and bass), Frehley (lead guitar and vocals), and Criss (drums and vocals).

With their make-up and costumes, they took on the personae of comic book-style characters: the Starchild (Stanley), the Demon (Simmons), the Spaceman or Space Ace (Frehley), and the Catman (Criss). Due to creative differences, both Criss and Frehley had departed the group by 1982.

In 1983, Kiss began performing without makeup and costumes, thus marking the beginning of the band's "unmasked" era that would last for over a decade. They accordingly experienced a commercial resurgence, with the platinum certified album Lick It Up successfully introducing them to a new generation of fans, and their music videos received regular airplay on MTV. Eric Carr, who had replaced Criss in 1980, died in 1991 of heart cancer and was replaced by Eric Singer. In response to a wave of Kiss nostalgia in the mid-1990s, the original lineup re-united in 1996, which also saw the return of their makeup and stage costumes. The resulting Alive/Worldwide Tour was highly successful, grossing $143.7 million, making it their most successful tour to date. Criss and Frehley have both since left the band again and have been replaced by Singer and Tommy Thayer. The band has continued with their original stage makeup, with Singer and Thayer using the original Catman and Spaceman makeup, respectively. In September 2018, Kiss announced that, after 45 years of recording and performing, they would be embarking on their final tour, The End of the Road World Tour, in 2019, with the final show confirmed for July 17, 2021 in New York City where the band formed back in 1973, with additional shows added.

Kiss is one of the best-selling bands of all time, having sold more than 75 million records worldwide, including 25 million RIAA-certified albums. Kiss also holds the title as America's #1 Gold record award-winning group of all time, having earned 30 Gold albums. Kiss has 14 Platinum albums, with three albums being multi-Platinum. On April 10, 2014, the four original members of Kiss were inducted into the Rock and Roll Hall of Fame. Kiss was ranked by MTV as the ninth "Greatest Metal Band of All Time", and placed tenth on VH1's "100 Greatest Artists of Hard Rock" list, as well as being ranked as the third "Best Metal and Hard Rock Live Band of All Time" by Loudwire.