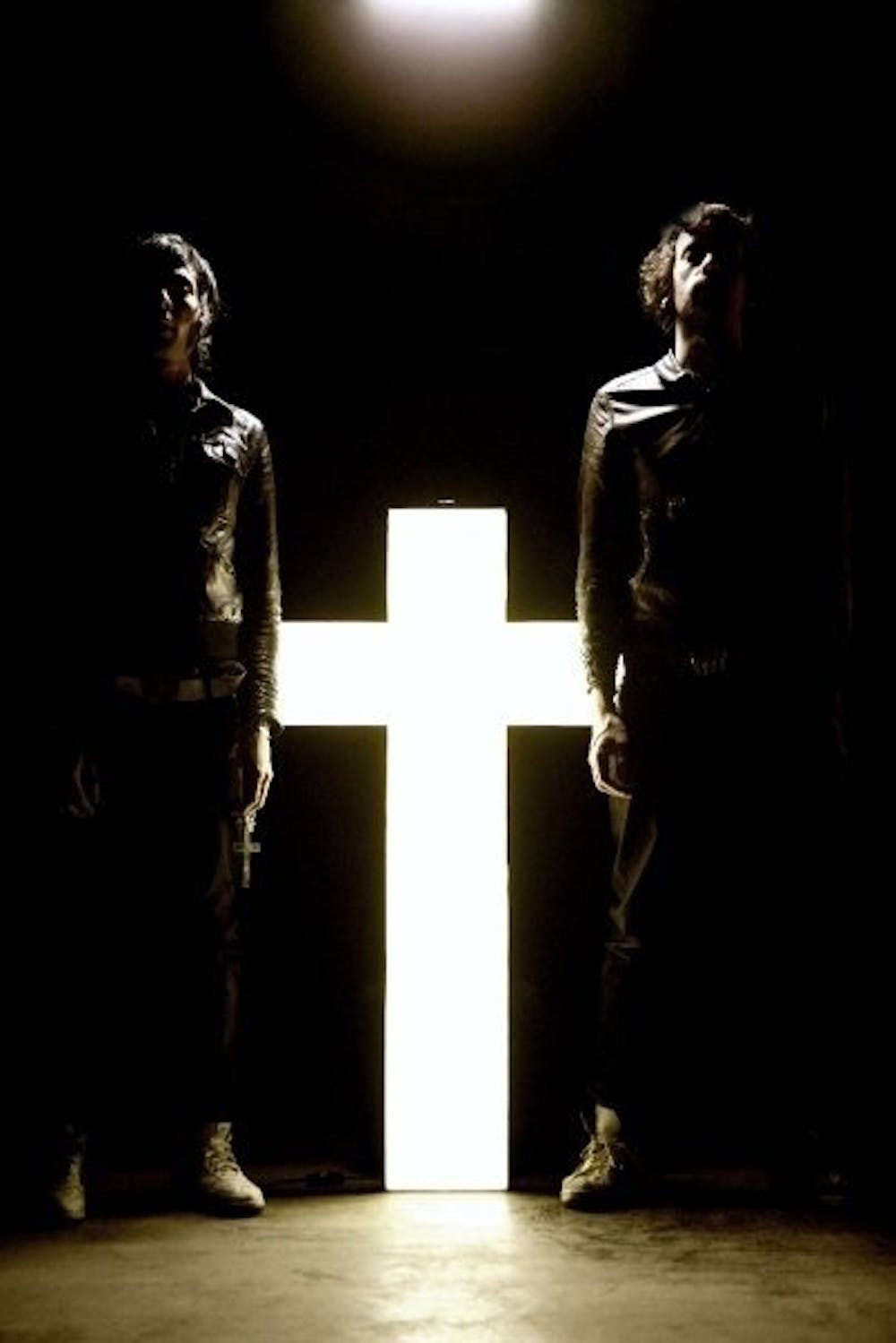 Follow Justice to get alerts about upcoming events and special deals!

Justice makes a monster disco album with microsamples, GarageBand and Cubase SX sound libraries and a song that almost makes them run for the hills. Thanks to Daft Punk, Coachella 2006 was a watershed moment for electronic music in America.

Justice has performed in venues such as: 1015 Folsom

Without further ado, here are Justice top 10 tracks of all time:

2. We Are Your Friends - Justice Vs Simian

5. We Are Your Friends - Justice Vs. Simian

Justice makes a monster disco album with microsamples, GarageBand and Cubase SX sound libraries and a song that almost makes them run for the hills.

Thanks to Daft Punk, Coachella 2006 was a watershed moment for electronic music in America. Their rapturously received set proved once and for all that dance beats could translate into a spectacle powerful enough to match or even dwarf the biggest rock bands. Daft Punk's monolithic stance was akin to Parliament's Mothership Connection and Electric Light Orchestra's Out of the Blue spacecraft teaming up to remix Studio 54 for the Nintendo generation.

One year later, it was fellow Frenchmen and sonic progenies Justice who brought a larger-than-life spectacle of digitized beats and interstellar imagery to assault the senses of Coachella 2007. Behind a large glowing cross (the band's logo and the “title” of their eagerly anticipated and Internet-leaked debut full-length), the two bobbing heads of Gaspard Augé and Xavier de Rosnay were flanked by massive stacks of Marshall amplifiers, the kind of excessive display of power you'd expect from Metallica or Van Halen, not the oft-cited “saviors of dance music.” Dropping distorted, metallic disco anthems like “D.A.N.C.E.” and the eternally huge remix of Simian's “We Are Your Friends,” Justice emphatically solidified their status as the current vanguard of electronic-music heroism, genre salvation be damned.

“Coachella was amazing,” gushes Augé from the band's home base of Paris. “We were a bit freaked out because it was the first time we played new stuff from the album live. Nobody knew the tracks, so we were really surprised to see how enthusiastic and receptive the audience was to them.”

With the release of ✝, Justice aims to bring that same “opera disco” spirit to iPods and stereos all over the world, complementing previous hit singles “Waters of Nazareth” and “Phantom” with panoramic variations on their signature sound. New songs like “DVNO” showcase a more playful side to the band's relentless assault, while “Valentine” is a moody instrumental reminiscent of '70s soft-rockers Supertramp with a touch of Jan Hammer. It may be incredibly frustrating (or relieving, depending on your viewpoint) to know that Justice creates such hard-hitting, well-received music with very little gear and without a whole lot of technical know-how. But there's still plenty of insight to learn about the French duo's methods and mayhem.

Who are some of your influences, musically? You say you're not big into techno or dance music in general.

Xavier de Rosnay: There are too many to be listed completely, but for example, we are hardcore fans of Sparks, The Beatles, Parliament, Snoop Dogg and Steely Dan, among others.

What kinds of records do you like to spin as DJs?

Gaspard Augé: The DJ side of Justice is more physical than emotional, so it goes from Donna Summer to Lil' Louis, Smith 'n' Hack to '90s rave tracks.

XdR: We play mainly electronic stuff. There are some tracks it's hard for us to not play, but sometimes we have to give them a break for a while. I think the track we've played the most is the Fatboy Slim remix of Wildchild's “Renegade Master” or “Be My Baby” by The Ronettes.

GA: I also like to play new stuff from friends like Boys Noize, SebastiAn, Mr. Oizo, Feadz and Soulwax. The Prodigy's “Smack My Bitch Up” is the one record I always carry with me.

Are you using a DJ program like Serato Scratch Live or M-Audio Torq when you DJ?

XdR: No, we stick to CDs. I think the technical possibilities are wider with CDs than with Serato. You play faster when you don't have to choose from a million MP3s.

How do you feel about the album leaking online before the official release date?

GA: The online leak was just unavoidable, so we don't really care. As long as you are doing some promotion, it's all part of the game.

Was the bulk of the album recorded all at once or spread out over a period of time?

GA: We've been composing and recording the album for one year. We wanted to have everything set in our minds before starting it to create something coherent.

Does Justice have a particular process in the studio? Do you start with a beat or a melody or a concept?

XdR: We mainly start with ideas. It's rare when anything comes from us just experimenting. When we started to write the album, we set certain limitations to avoid losing ourselves in something too weird or something that would have taken eight years to finish. We had a very specific idea of how we wanted the album to sound. And to make a draft of the album and then to make it allowed us to get something exactly as we imagined it.

Do you prefer sampling or creating your own sounds when making music?

GA: I have a personal-pride problem with sampling. But we were arguing about it, and in the end I agreed with Xavier that the result is the only thing that matters.

XdR: I think this is a standard process in making electronic music — the important thing is to not be frustrated at the end. There are only three recognizable samples on the whole album, and we did not try to hide them. All the rest are microsamples that even the authors could not recognize. And there are some you can have some suspicions, but you can't be sure it's coming from what you think it is.

Do you prefer using software or hardware keyboards and drum machines?

GA: We used to work with hardware and synths for the previous singles, but for the album we mainly used software, particularly Cubase and GarageBand.

XdR: We love the flexibility and the possibilities offered by software. A lot of people say that software is shit because it doesn't sound like analog-hardware stuff. I think the fact that it doesn't sound like analog gear — but something else entirely — is why we like to use it. And with Cubase SX and GarageBand [on an Apple G5], we mainly used the sound libraries, which are quite amazing. [Also in the duo's bare-bones setup is an Apogee Ensemble interface and, for monitors, Altec iPod speakers and a Bose radio alarm clock.]

No upcoming events with Justice