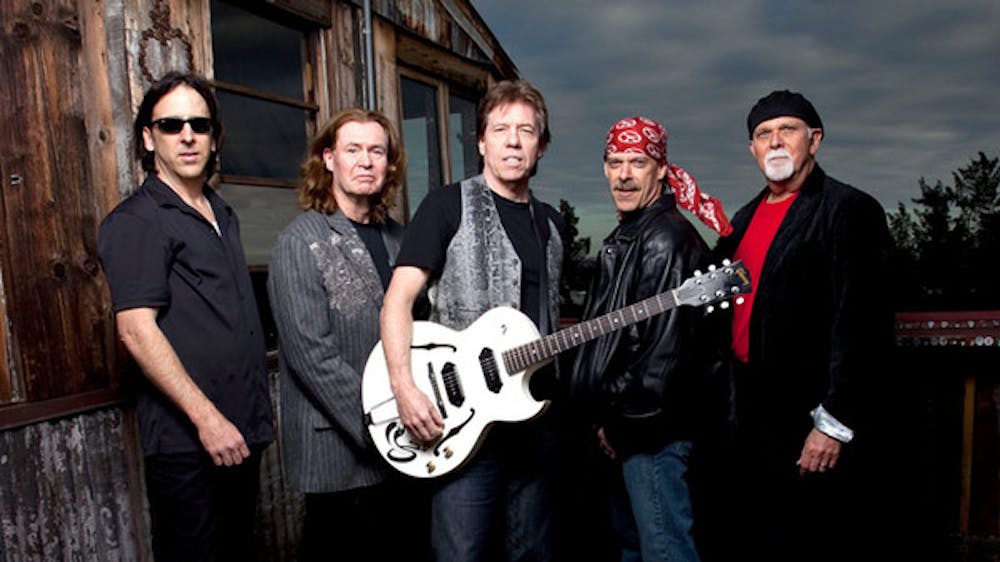 Follow George Thorogood & the Destroyers to get alerts about upcoming events and special deals!

George Thorogood has a theory.

Without further ado, here are George Thorogood & the Destroyers top 10 tracks of all time:

2. One Bourbon, One Scotch, One Beer

George Thorogood has a theory. In any field, especially the arts, there are always two things ‘genius’ and ‘very clever.’ There’s no in-between. You’re either a genius or very clever. I’m going to throw out two names at you. John Lennon genius, right? And Mick Jagger? Very clever. See what I’m saying? I’ll give you another example. Einstein genius. And George Thorogood very clever.’’ Yet what about the people who think Thorogood is a genius in his own way? OK, I’m a genius at being very clever,’’ he says with a hearty laugh.

Thorogood loves quips almost as much as he loves the blues, so here’s another: Let’s put it this way. Dylan has a Rolls Royce dealership. I have a used Chevy dealership. But I’m in the business. You got it? That’s all I wanted from this thing. A gig, man. And I got a gig.’’ Thorogood and his band the Destroyers have held that gig for more than 30 years. And he’s not about to let go now. It’s like a championship fight,’’ he says. You’ve got two guys in the ring one guy who’s the contender and wants to get the title and you’ve got the guy who’s got the title and it took him 15 years to get the title and he’s held onto it for five years. Who’s going to be the tougher opponent? It’s going to be the guy with the title who worked hard to get it. You’re going to have to kill him to get it away from him. And that’s all that I’m doing up there.

I’m trying to hold my gig. I just want to make sure that at the end of the night the promoter comes up and says, ‘I want to hire you again.’ ‘’ The Destroyers fought their way to the top. They came out of Delaware in the ‘70s as a jarringly high-energy bunch (also featuring drummer Jeff Simon and bassist Billy Blough) whose raucous, slide guitar-stoked, blues-rock takes on tunes by Chuck Berry, Elmore James, John Lee Hooker, Bo Diddley and others helped land them a contract with Cambridge’s Rounder Records. They had moved to Boston and cut their teeth in the city’s blues circuit before their second album for Rounder, Move It On Over,’’ struck big with the title track, an amped-up cover of a Hank Williams tune.

They added a saxophonist (Hank Carter) and further fame came in the ‘80s through a signing to EMI Records, which released a series of gold records by the band. These included 1982’s Bad to the Bone’’ (the title track is Thorogood’s best-known composition and its video became a staple on MTV) and 1988’s Born to Be Bad,’’ with the swaggering hit, You Talk Too Much.’’ The ‘90s saw more hitmaking with 1993’s Get a Haircut,’’ from the album, Haircut.’’ And albums followed into the new millennium with 2003’s Ride ‘Til I Die’’ (on Eagle Records, which is also putting out his new disc, Hard Stuff’’) and a 2004 Capitol compilation, Greatest Hits: 30 Years of Rock,’’ which went gold and topped Billboard’s blues chart for 60 weeks, while winning the magazine’s award for blues record of the year. And still, Thorogood good-naturedly downplays his accomplishments.

In 1970 I said, ‘You ain’t no genius, George.’ You’ve got to figure out a way to do this with barely a high school education and no voice to speak of and some interesting chops on the guitar. But you’ve got to bullshit your way in there, man. I say this to the world: The Beatles did what they did, the rest of us played the blues.’’ The Destroyers have expanded through the years they now include not only Simon and Blough, but guitarist Jim Suhler (a Texan who was brought aboard in 1999) and saxophonist Buddy Leach, who joined in 2003. The new album, Hard Stuff,’’ is a keep-the-faith effort with covers of tracks by John Lee Hooker (Huckle Up,’’ with its Boogie Chillun’’ flavor), Jimmy Reed (‘’Little Rain Falling’’), and Fats Domino (Hello Josephine,’’ dedicated to the undying spirit of the people of New Orleans’’).

And Thorogood did more of his own writing this time, hooking up with Nashville roots stalwart Tom Hambridge (who has worked with Susan Tedeschi, NRBQ and Lynyrd Skynyrd) for the whomping title track, plus the gritty travelogue Anytown USA’’ with references to the rock meccas of Cleveland, Detroit, and Boston. And Suhler, the Destroyers’ rhythm guitarist, also chipped in with some writing credits. Through it all, Thorogood maintains his cleverness. How far can you stretch three chords? Or in my case, one chord?’’ he says, laughing again. How many different paint jobs can I put on ‘Johnny B. Goode’? You got it? My biggest thrill is when somebody says to a friend, ‘I’ve got George’s new CD and it’s just like the last one.’ You know what I mean? Not all of us are John Lennon and Paul McCartney. They started off playing Chuck Berry, then they developed it into ‘Strawberry Fields.’ I am not like that, nor do I ever proclaim to be like that.’’

Thorogood prefers to think of himself as a role-player, but that role has been pleasing a couple of generations of rock fans by this point. He retains his innocence and also his self-deprecating humor. I once talked to Randy Newman and I was freaked out because he told me what a big fan of mine he was,’’ says Thorogood. I said, ‘Hey, you’re Randy Newman. You’re a genius. And after a while, he got a little miffed. He said, ‘George, can’t I like ‘Bad to the Bone’? What’s the matter with you?’ He was singing the National Anthem at a ballgame and I couldn’t even concentrate on the game because I was so freaked out that Randy Newman not only knew who I was, but that he dug what I do. When I was going home, my father-in-law said, ‘Look at it this way, I heard that Laurence Olivier was a big Three Stooges fan.’ You got it? That’s all Jeff and Billy and I were: Larry, Moe and Curley. But Larry, Moe and Curley are still on TV, OK? I’m still on the scoreboard.’’