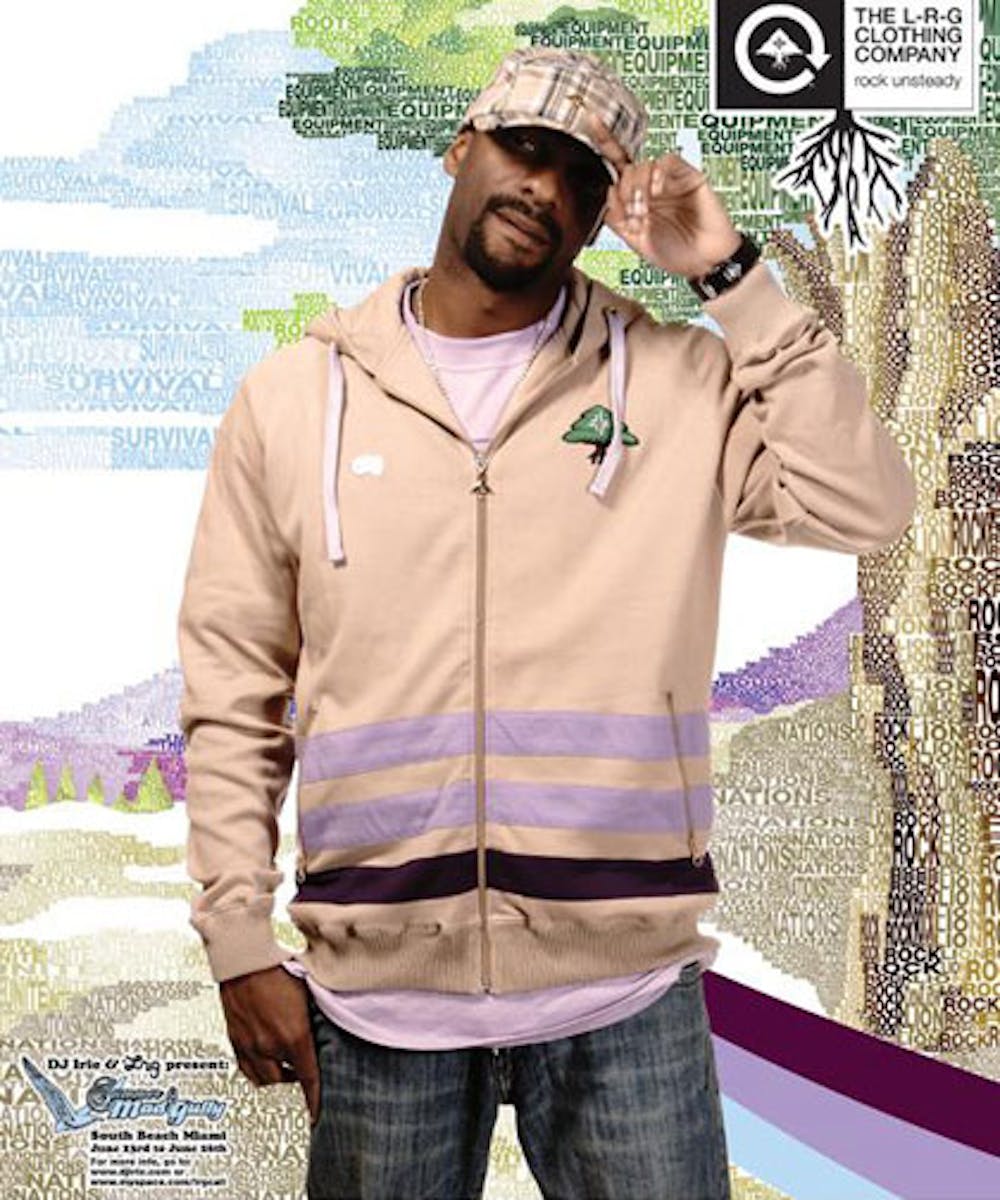 Follow DJ Irie to get alerts about upcoming events and special deals!

He dominates any venue, infuses each and every party with his captivating and infinite energy and has taken over an entire market… Official DJ of the 2006 NBA World Champion Miami HEAT DJ Irie knows no boundaries.

Without further ado, here are DJ Irie top 1 tracks of all time:

He dominates any venue, infuses each and every party with his captivating and infinite energy and has taken over an entire market… Official DJ of the 2006 NBA World Champion Miami HEAT DJ Irie knows no boundaries. Voted 2005's Best Club DJ by the Miami New Times, his passion, enthusiasm and particularly charming personality set him apart in the music industry, and keep him on his toes with his ear to the streets.

The youngest of three boys, DJ Irie was born in St. Croix and raised in Miami, FL. Schooled in Jamaica, home to his family, at a private boarding school, he was introduced to his first and only true love… Music.

With a home made beat machine, constructed from a walkman and speakers, combined with Grammy winning and multi-platinum reggae phenomenon-roommate Sean Paul's Casio, DJ Irie was born. Before attaining his learners permit, he was buying records and spinning at Jamaican clubs; an early introduction and practice for his later years as the hottest DJ in Miami and one of the most highly regarded turntable assassins in the country.

What began as an internship at Miami's #1 station for Hip-Hop and R&B, and a part-time college radio show, grew into a full time job as general manager of the station and reigning title of #1 college DJ. College parties in Coconut Grove, Miami showcased his talents and led him on the path to one of the most elite nightclub scenes in the country… South Beach.

During the daytime hours, as DJ of the most listened to mix-show on Miami's WEDR 99Jamz, Irie spins his favorite records three days a week, (Tuesday, Thursday and Friday) on "The Drive at 5". He also holds the #1 weekend slot on Saturday nights from 10pm-Midnight with the "Saturday Night Thunderstorm", rocking the weekend airwaves prior to rocking the streets. You can also hear DJ Irie's mix-show broadcast on the international level, Thursdays from 9-10pm (Paris time) on French internet radio, FG DJ Radio (www.radiofg.com). FG is one of the most successful DJ radio stations due to their status as having the biggest roster of R&B and house DJ's on air. Irie is also broadcasted on one of FG DJ Radio's other web station FG Chic on Monday, Wednesday and Friday each week at 10pm, 6am and 2pm respectively.

Spinning the freshest music on the charts and constantly breaking the newest exclusive records, DJ Irie continues to gain momentum on a national and international scale. DJ Irie has recently been asked by Kevin Federline to join him on his US debut during the upcoming Nickelodeon Teen Choice Awards. Native to Miami, when Irie is not on tour he is a mainstay at every exclusive and noteworthy venue on and off South Beach. Tuesday you can find him at The Metro at Hotel Astor, Wednesday is the exclusive Forge dinner party, Thursday it's Crobar on South Beach, Friday is Club Mansion, Saturday- the always star-studded Prive and Sunday he takes over at Opium Garden. DJ Irie has also been tapped by Rivals in Hollywood, FL to produce a series of hosted podcasts and in-venue music.

Due to his abilities behind the turntables and his contagious personality DJ Irie was recently handpicked by famed director Michael Mann for a cameo role in the upcoming major motion picture "Miami Vice" starring Jamie Foxx and Colin Farrell, due to hit theaters Spring '06. That role led to Irie forming a close personal relationship with Jamie Foxx and in turn being asked personally by Foxx to be his official DJ. Not only will he be traveling on the 'Unpredictable' album tour (beginning tentatively in March) but you can find him spinning at all of Foxx's events. From New Year's Eve at the Delano on South Beach and his birthday party in L.A., to all upcoming television specials, DJ Irie will be Foxx's right hand man.

For DJ Irie, music and sports also seem to go hand in hand. As the official DJ of the 2006 NBA World Champion Miami HEAT, Irie is the only DJ in the world to be awarded a NBA championship ring. Irie DJ's each game and is known throughout the American Airlines Arena by fans and players alike, for his immeasurable enthusiasm and ability to play the beats that get fans out of their seats. His energy is contagious, and for the fifth season in a row, Irie is steadily playing his position keeping the HEAT on fire.

Although Miami is his stomping ground, DJ Irie's presence is limitless. He is called upon year after year to bring the HEAT, as he showcases his talent as the official DJ of the NBA All Star Weekend. In Atlanta in 2003, Irie was also featured on the NBA's "Read to Achieve" special with Ahmad Rashad, simulcast on multiple stations including BET, ABC, ESPN as well as various international stations, highlighting the top tier talent in entertainment and sports. All Star Weekend attendees in Atlanta, Philadelphia, Los Angeles, Denver and this year's stop over in Houston, have all gotten a taste of the Irie experience.

He also made history in '05 as the first ever DJ to perform at a Bowl game, when he performed at the Miami Dolphins Stadium for 77,000 fans in the Orange Bowl halftime show.

On the mix tape circuit, DJ Irie's made his name known and continues to release only the freshest mix tapes. Put out by DJ Irie and DJ Diesel- aka Shaquille O'Neal, "Kingz of Miami-Part One", "Win or Go Home" and the latest addition, and second installment in the "Kingz of Miami" series, "The Season Opener" featuring artists Paul Wall, Young Jeezy and Smitty among others, include club bangers from only top tier talent. Irie has also brought the sounds and energy of his famed club nights to the street with his Crobar mix tape, which is moving "like crazy", and the highly anticipated Mansion mix tape to drop in '06.

On the national level, DJ Irie is impossible to miss. From BET's "Rap City" to the Billboard Hip-Hop and R&B Awards, Irie is constantly called upon for major industry events. MTV also has a long term interest in DJ Irie. When the VMA's hit South Beach, it was no question who would be spinning at the biggest and best block parties and after parties, raising the bar and setting the mood. Irie has also been featured on MTV's "Total Request Live", "MTV Made My School Year" and 3 national MTV tours in the summer of '05: The Game Riot Tour, Sucker Free Sunday Tour and the Hot Import Nights Tour.

But he doesn't stop there. Irie is a mainstay in Puerto Rico, his second largest market, where he travels close to 15 times per year to spin at the extensive clubs, beach and holiday parties, including the Coors Light Temple of Sound held at the Roberto Clemente Coliseum. 2005's bill included three major talents, Eric Morillo, Busta Rhymes and none other than DJ Irie, who was the promotional face of the event on billboards all over the streets of Puerto Rico.

And you can find DJ Irie at other major events such as The Heineken House Party in Ocho Rios, Jamaica and the Bahamas in '05- which requests DJ Irie every year since its inception. His travels also take him frequently to Europe to headline at clubs in Germany, Switzerland and Austria among other countries, where his name and talent are well known and highly anticipated.

Branching out in the music industry also seemed like a natural progression for DJ Irie, and his DJ consulting firm, Artist Related, is up and running and has already made a name for itself. With a roster of well known DJ's such as: DJ Erok, DJ Knowledge and DJ Ross 1 of NY, already signed on, Artist Related has been named the official entertainment company for the ever-exclusive Casa Casuarina (Versace Mansion).

There isn't a hot spot around where Irie doesn't make himself known. He's anywhere and everywhere… and slowing down is not an option. DJ Irie is on fire and keeping it hot wherever he is around the globe.

No upcoming events with DJ Irie