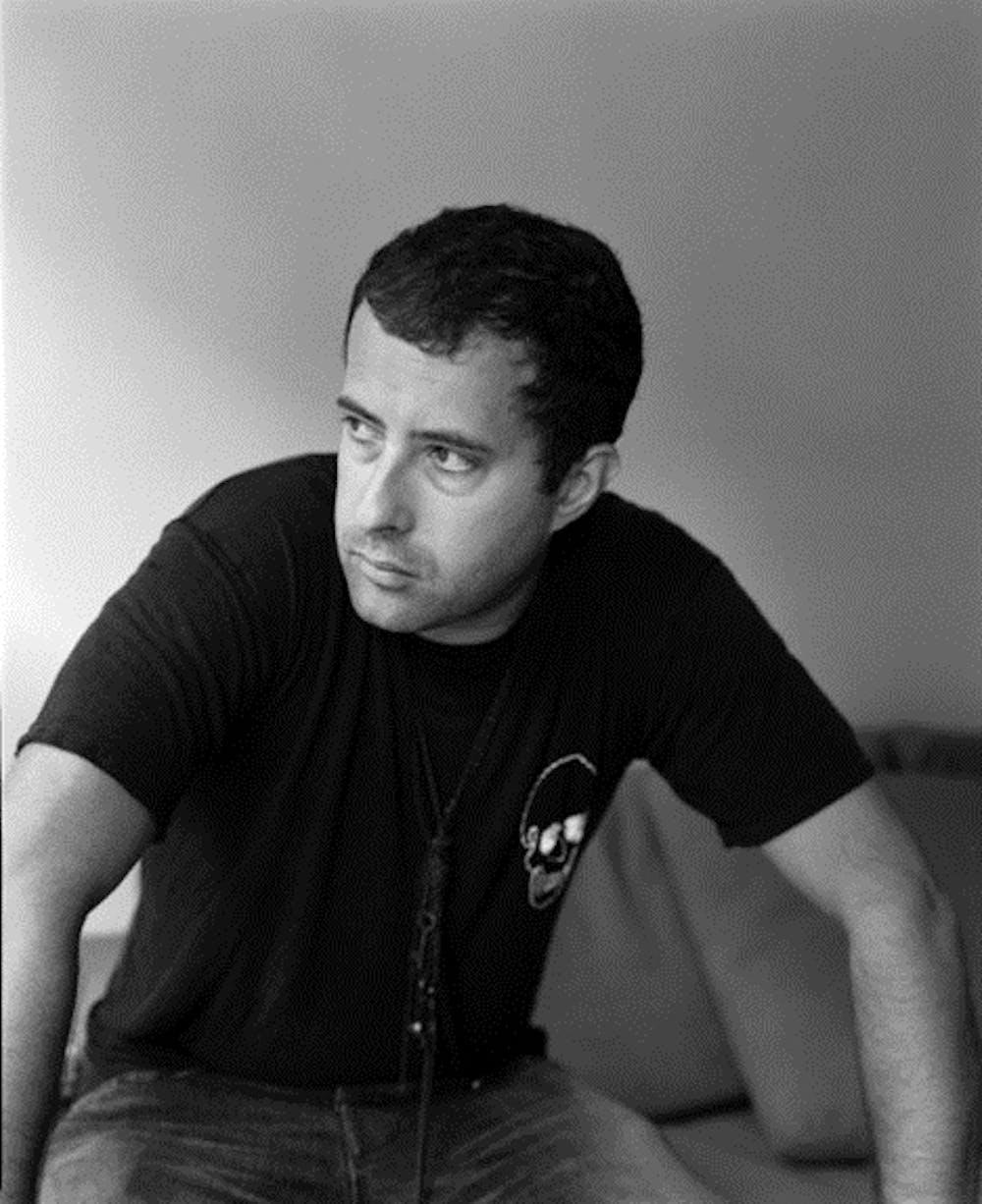 Follow Dave Clarke to get alerts about upcoming events and special deals!

‘I may be established but I’ll never be establishment.’ “I’m a pirate and I keep my loot,” says Dave Clarke with a wry smile.

Without further ado, here are Dave Clarke top 10 tracks of all time:

1. What Was Her Name (feat. Chicks on Speed)

“I’m a pirate and I keep my loot,” says Dave Clarke with a wry smile. He’s quoting BowWowWow, specifically the song ‘C30, C60, C90, Go’, a thirty year old tribal punk-pop ode to home-taping. He sits back in the swivel chair at the sound desk of his Dutch Radio Studio, a sharply designed black and chrome space fleshed out with quirky visual flourishes. BowWowWow came up because he’s talking about his vinyl fetishism, the smell of 12”s in record shops, yet he hasn’t used the format professionally in eight years.

“I’m really buzzing about the new version of [virtual DJ mixing tool] Serato,” he enthuses, “I’ve always been at the vanguard of digital DJing and the internet enables me to get new music immediately. Sometimes I’ll be in a hotel, someone can send through a track fifteen minutes before I go to a venue and I think, ‘This is incredible, I’m playing this tonight.’ That’s such liberation compared with to waiting months for an acetate.” He pauses and reaches the crux of the matter, “It’s all artist to artist now, there’s no middle management.”

He may be known as The Baron Of Techno, a moniker given to him by John Peel, but Dave Clarke has an anarchist streak a mile wide and punk in his soul. Having no truck with establishment figures or authoritarianiasm, it’s unsurprising he revels in the libertarianism of the World Wide Web. It gives symmetry to his savvy techno vision.

“I got so much shit for being a futurist,” he states (he was the first Techno artist to release an Internet only single back in 2000), “When I started going digital and moved away from vinyl some of my fellow artists asked me, ‘How much are they paying you?’ How much is who paying me? It was such a strange situation - this is techno – it’s supposed to be forward-looking! I thought, ‘Whatever these people say, I’m still going to move forward, it’s the right course.”

He did and does. Ever the gadget-lover, he enthuses about downloading books onto hand-held devices but his main motive is delivering music to the ears of his global dancing public. He plays out every weekend everywhere. To name a recent few, The Rex in Paris, Klubbers Day in Madrid, Buenos Aires, Fabric in London, headliner of Britain’s Glade Festival, and he programmed and headlined his own stage at Holland’s Extrema Festival in 2008 and 2009. At every event there’s the same attention to detail, his sets swooping whip-smart along the cutting blade of techno and electro backed up by a seasoned bag of DJ tricks that pushes the whole caboodle to the next level.

At the same time, it’s all informed by his sonic history, represented on the one hand by 2008’s ‘Back In The Box’ mix CD wherein his peerless selection represented the dawn of house, featuring tracks by DJ Pierre, Marshall Jefferson, Farley ‘Jackmaster’ Funk and more. On the other hand, there’s his gothic, punk side, the man in black embracing the gritty rock’n’roll energy of The Damned and Bauhaus. It seems an unlikely combination but then he’s always been an outsider…

Clarke was born and raised in Brighton. Often expelled from school, he fully admits to being a disruptive boy with a short attention span caused by an insecure home life. What started him on the road to being a DJ was combining his father’s love of technology with his mother’s disco-soul records, tunes by the likes of Roy Ayers and The Crusaders.

“My dad had disco lights in the front room,” Clarke explains, “record decks, reel-to-reels, reverb units, he even did a thing on BBC Radio about quadrophonics. It’s pretty obvious where I get it all from really."

Retreating to his attic room he made tapes for friends, dismantled electronic equipment, and subsisted on a musical diet of Visage, early hip hop, Pigbag and punk.

When his parents split, he ran away from home, sleeping rough in car-parks before a friend offered him floor-space. The only thing that kept him going was music. From soul to the Psychedelic Furs, from Devo to the nascent Chicago house sound, Clarke devoured it all voraciously and blagged himself a DJ slot in Brighton. Soon such gigs provided Clarke with a meagre living, then in 1994 his reputation was sealed by a series of EPs known collectively as ‘Red’. The debut album ‘Archive 1’ followed, flecked with hints of breakbeat and electronica, a novelty in the puritanical techno scene of the time. His mix CDs included the two best-selling ‘World Service’ outings (one of which made it into the top ten of best mix compilations of the 00's in Resident Advisor)  which showcased his dual love for electro and techno, and he briefly signed to Skint Records, resulting in 2004’s ‘Devils Advocate’ album, a long-player jammed with dark techno energy but laced with hip hop beats. When his production pace ebbed Music Man Records gathered together ‘Remixes And Rareties’ in 2007, making Album Of The Month in Mixmag and receiving critical plaudits all over. There is, however, no denying things eventually went quiet on the production front.

Clarke greets this with a dramatic pause. “If I’d stepped into a studio then I could have done what I’d already done but I didn’t want to do that, I want to do something I haven’t done.” He pauses again before going on. “I think it’ll happen,” he allows, “I’m not going to leave it forever...”

In the meantime he has plenty else on. Moving finally from rural sedate Sussex to Amsterdam revitalized him.

“I felt quite excluded when I lived in the countryside,” he admits, “whereas my home in Amsterdam is fifteen minute walk from most venues so I’ve seen Patti Smith, Queens Of The Stone Age, The Horrors, Holy Fuck!. There’s no excuse not to go so that’s very inspiring.”

He’s also built up his White Noise radio show on the Dutch station 3FM (also archived at the award-winning http://3voor12.vpro.nl),interviewing artists ranging from John Foxx to Coldcut to Broken Social Scene but the thrust of the show is still to cast light on exciting new music

“The most important point is to air music that other stations and DJs don’t have the power to,” he says, “music that wouldn’t normally be given a chance. I can just go where I want with it although it’s still 99% techno and electro.”

The same applies to his White Noise label. Emphatically not a vanity project for his own releases, it has instead hosted boutique vinyl pressings (alongside the usual digital fare) for gleaming new material by artists such as Frank Kusserov, Noirdegout, Woody McBride, Marco Bernadi, Terence Fixmer and The Hacker. These and other tunes will be chopped, hammered, filleted and turned on their heads during Clarke’s DJ sets. That’s where he comes alive, where skills honed for years blow venues apart. A 2009 highlight, for instance, was the fifteenth birthday party of FUSE, the Brussels club where his standing is second-to-none, where he’s developed an extraordinary relationship with the crowd. He speaks of it with his breath catching, as thrilled as ever by the ride the music takes him on.

“I love having a crowd absolutely hanging by a thread, completely gripped,” he announces passionately, “I often say to myself in the middle of a set, ‘I fucking love my job’.”

It’s true. He really does. And it shows.