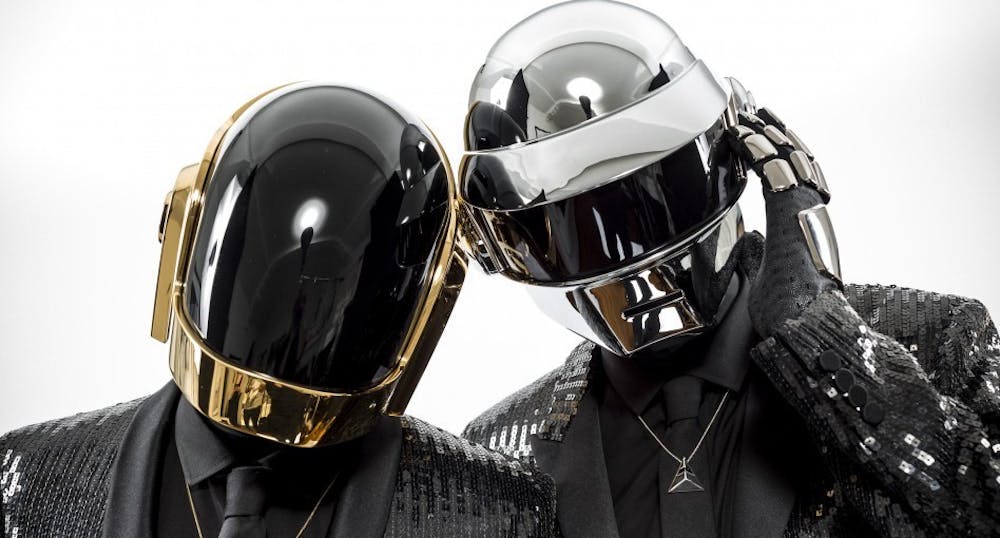 Follow Daft Punk to get alerts about upcoming events and special deals!

Thomas Bangalter and Guy-Manuel de Homem-Christo met on the grounds of their lycée in Paris in 1987.

Daft Punk has performed in venues such as: Great Northern, 1720, The Crocodile, Public Works, Rickshaw Stop

Without further ado, here are Daft Punk top 10 tracks of all time:

Thomas Bangalter and Guy-Manuel de Homem-Christo met on the grounds of their lycée in Paris in 1987. The two became good friends and later recorded demo tracks with others from the school. This eventually led to the formation of the guitar-based group Darlin' with Laurent Brancowitz in 1992. Bangalter and de Homem-Christo played bass and guitar, respectively, while Brancowitz performed on drums. The indie rock trio had branded themselves after The Beach Boys song of the same name, which they covered along with an original composition. Stereolab released both tracks on a multi-artist Duophonic Records EP and invited the band to open for stage shows in the United Kingdom.[8] Bangalter felt that "The rock n' roll thing we did was pretty average, I think. It was so brief, maybe six months, four songs and two gigs and that was it." A negative review in Melody Maker subsequently dubbed the music "a bunch of daft punk." Instead of dismissing the review, Bangalter and de Homem-Christo found it to be amusing.[4] As the latter stated, "We struggled so long to find [the name] Darlin', and this happened so quickly." Darlin' soon disbanded, leaving Brancowitz to pursue other efforts with Phoenix.[5] Bangalter and de Homem-Christo formed Daft Punk and experimented with drum machines and synthesizers.

In 1993 Daft Punk attended a rave at EuroDisney, where they met Stuart Macmillan of Slam, co-founder of the label Soma Quality Recordings. The demo tape given to Macmillan at the rave formed the basis for Daft Punk's debut single, "The New Wave", a limited release in 1994. The single also contained the final mix of "The New Wave" called "Alive".

Daft Punk returned to the studio in May 1995 to record "Da Funk". It became their first commercially successful single the same year. After the success of "Da Funk", Daft Punk looked to find a manager. They had no trouble finding one at the time as they chose Pedro Winter, who regularly promoted them and other artists at his Hype night clubs. The band signed with Virgin Records in September 1996 and made a deal through which they licensed their tracks to the major label through their production company, Daft Trax. "Da Funk" and "Alive" were later included on Daft Punk's 1997 debut album Homework. The album was regarded as an innovative synthesis of techno, house, acid house and electro styles, and is widely acknowledged as one of the most influential dance music albums of the nineties. The most successful single from Homework was "Around the World", which is known for the repeating chant of the song's title. Daft Punk also produced a series of music videos for Homework directed by Spike Jonze, Michel Gondry, Roman Coppola and Seb Janiak. The collection of videos was released in 1999 and titled D.A.F.T. - A Story about Dogs, Androids, Firemen and Tomatoes.

By 1999 the duo were well into the recording sessions for their second album, which had begun a year earlier. 2001's Discovery took on a slicker and distinctly synthpop-oriented style, initially stunning fans of Daft Punk's previous material in Homework. The group states that the album was conceived as an attempt to reconnect with a playful, open minded attitude associated with the discovery phase of childhood.[8] This accounts for the heavy use of themes and samples from the late '70s to early '80s era on the album. It reached #2 in the UK, and its single "One More Time" was a major club hit, creating a new generation of fans mainly familiar with the second Daft Punk release. The singles "Digital Love" and "Harder, Better, Faster, Stronger" were also very successful in the UK and on the U.S. dance chart, and "Face to Face" hit #1 on the U.S. club play charts despite a limited single release. A 45-minute excerpt from a Daftendirektour performance recorded at Birmingham, UK in 1997 was also released in 2001, entitled Alive 1997.

2003 first saw the release of the feature-length animated film Interstella 5555: The 5tory of the 5ecret 5tar 5ystem. Daft Punk produced the film under the supervision of Leiji Matsumoto, whom they have said is their childhood hero. The album Daft Club was also released to promote the film. It features a collection of remixes previously made available through an online membership service of the same name.

Starting on September 13, 2004, Daft Punk devoted six weeks to creating new material. The duo released the album Human After All in March 2005. Reviews were mixed, mostly citing its overly repetitive nature and seemingly rushed recording. The singles taken from this album were "Robot Rock", "Technologic", "Human After All" and "The Prime Time of Your Life". The earliest official statement from Daft Punk concerning the album was "we believe that Human After All speaks for itself."

A Daft Punk anthology CD/DVD entitled Musique Vol. 1 1993-2005 was released on April 4, 2006. It contains new music videos for "The Prime Time of Your Life" and "Robot Rock (Maximum Overdrive)". Daft Punk also released a remix album of Human After All called Human After All: Remixes. A limited edition included two kubricks of Daft Punk as robots.

On May 21, 2006, Daft Punk premiered their first directed film, Daft Punk's Electroma at the Cannes Film Festival sidebar Director's Fortnight. The film does not include their own music, which is a first for the duo considering their previous DVD and film releases (D.A.F.T. for Homework and Interstella 5555 for Discovery). Midnight screenings of the film were shown in Paris theaters starting from the end of March 2007. Initial public comments have since been positive.

Daft Punk released their second live album titled Alive 2007 on November 19, 2007. It contains the duo's performance in Paris from their Alive 2007 tour. The album includes a 50-page book showcasing photographs shot while on tour. The live version of "Harder, Better, Faster, Stronger" from Alive 2007 was released as a single. A music video for the single directed by Oliver Gondry features footage shot by 250 audience members at Daft Punk's Brooklyn appearance at KeySpan Park, Coney Island.

No upcoming events with Daft Punk