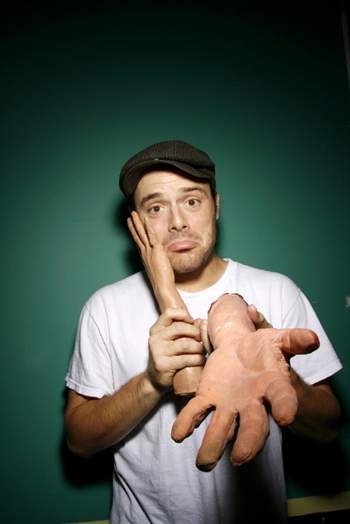 Without further ado, here are Blockhead top 10 tracks of all time:

I'm Blockhead. I was born and raised in downtown manhattan. I make beats. I've worked with a bunch of MC's (lots with Aesop Rock, Murs, Cage, Mike Ladd, and a bunch of others). I also do solo instrumental hip hop type shit on Ninja Tune Records .

My first album "Music By Cavelight" is now approaching triple platinuim and I'm thinking of buying a jet . Both of those statements are incredebly false. But what is true is that I'm also one half of the critically acclaimed (if acclaimed means dispised) Party Fun Action Committee along with my homeslice Jer. It was a comedy album put out by Def Jux. It is also , possibly, the best worst selling album ever made.

Since then, I've made four other solo albums, worked with a bunch of rappers, toured a lot and I'm still here.
My newest album, "Interludes after midnight" is out now. You should totally check it out. Seriously.

Simon was born and raised in Manhattan. He is the son of the late Sidney Simon, a well known sculptor in New York City, and Renee Adriance, a social worker. He has one brother and five half siblings. [2][1] From a young age, he loved hip hop--both the lyrical and musical aspects. In his early teens, he and his friends made a group called the Overground where Simon first started making music. [3] An aspiring MC, he enrolled in Boston University in 1994. He only remained at Boston University for one year, but in that year Simon's real music career began when he first met and starting working with Aesop Rock who was also a student at BU. At this point Simon put aside his ambition to be a MC and focused on producing music.[1]

Aside from his solo efforts released on the Ninja Tune label, Blockhead is most associated with producing for Aesop Rock, a rapper for the indie hip hop label Rhymesayers. He has also previously worked with rappers Cage, Hangar 18, Open Mike Eagle and Murs. He is also a member of the comedy hip hop group Party Fun Action Committee. According to him, his stage name comes from the shape of his head: "While it's not square, it's pretty close." [1]

No upcoming events with Blockhead