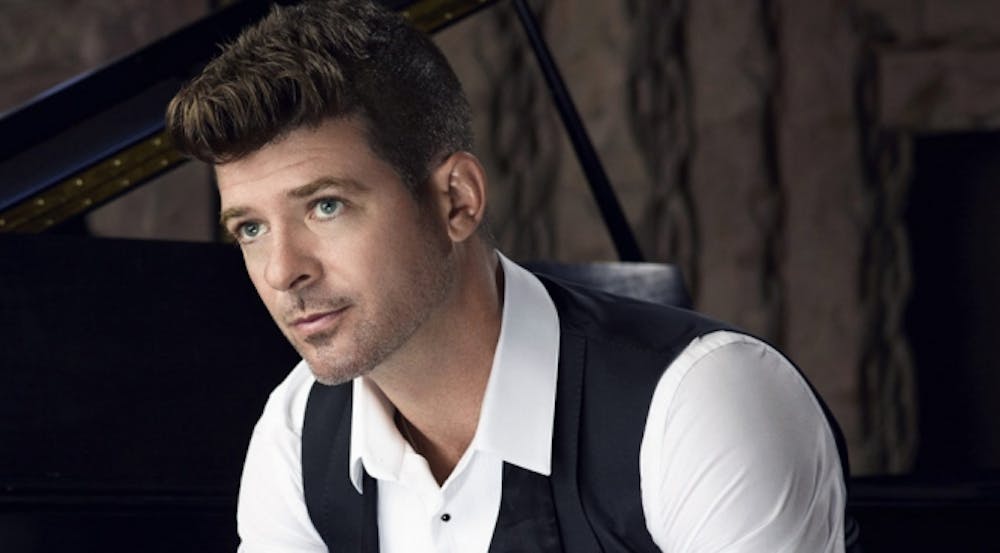 Follow Robin Thicke to get alerts about upcoming events and special deals!

The Evolution of Robin Thicke, the second solo album from the critically acclaimed writer/producer/singer, brings to life the stories and emotions of the last two tumultuous years of his life.

Robin Thicke has performed in venues such as: LIV, STORY, Yuengling Center

Without further ado, here are Robin Thicke top 10 tracks of all time:

The Evolution of Robin Thicke, the second solo album from the critically acclaimed writer/producer/singer, brings to life the stories and emotions of the last two tumultuous years of his life. With a voice of purity, passion and soulfulness, he weaves tales of love, loss, temptation, redemption and finding hope when all the odds are stacked against you. “My greatest desire with this album was to write songs that were completely honest and sing them with the emotion I was feeling when I wrote them, so that whoever listens to my music is brought as close to my experiences and life.”

With this intention, Robin created “Lost Without U,” the infectious sleeper hit of the spring. An instant classic, this song is based on a true life experience of missing his woman. This song has taken on a life of its own and has already propelled the album to platinum status, and into the Top 10 of Billboard magazine’s Top 200 Album Chart and R&B Album Chart. “Lost Without U” was the #1 R&B song on the Billboard chart for 11 weeks and was #1 for 16 weeks at the Urban AC. In addition Robin has been nominated for 2 BET Awards, Best Male R&B Artist and Viewer’s Choice. His recent tours with Keyshia Cole, India Arie and John Legend have solidified his reputation as one of R&B’s premier live singers. Robin recently performed his hit song “Lost Without U” on the Oprah Show, and he captivated the Oprah audience so much that she asked him to come back for a second show two weeks later. After that, the album jumped over 100% in sales. Coming up, Robin will perform in Amsterdam on June 19th at the Paradiso and in Paris on July 3rd at the Bataclan. Following these performances is his highly anticipated tour with Beyonce’.

The album shows Robin’s range as a singer, and as a songwriter. From the plaintive plea of “2 The Sky” to the laidback groove of “Got 2 Be Down” (featuring Faith Evans), from the pain of “Lonely World” to the unabashed hope and encouragement of “Can U Believe,” The Evolution of Robin Thicke reveals all sides of the man.

Robin taught himself to play piano at the age of twelve and by the age of fourteen, he could play anything he heard on the radio. At sixteen, with no formal training, Robin began professionally writing and producing music for recording artists like Brandy and Brian McKnight. As a songwriter and producer, he has amassed dozens of gold and platinum records with artists including Usher, Mary J. Blige, Michael Jackson, Christina Aguilera…but now it is Robin’s turn to show what he can do as a singer, as his own man. Last year Pharrell Williams signed Robin to his label, Star Trak Records, and recorded the single “Wanna Love You Girl,” which immediately became a club hit and attracted the attention of radio and club DJs across the country.

Reflective, redemptive, passionate and etched with undeniable soul, The Evolution of Robin Thicke is an imaginative and heartfelt album that announces the arrival of the next triple threat in music.

No upcoming events with Robin Thicke