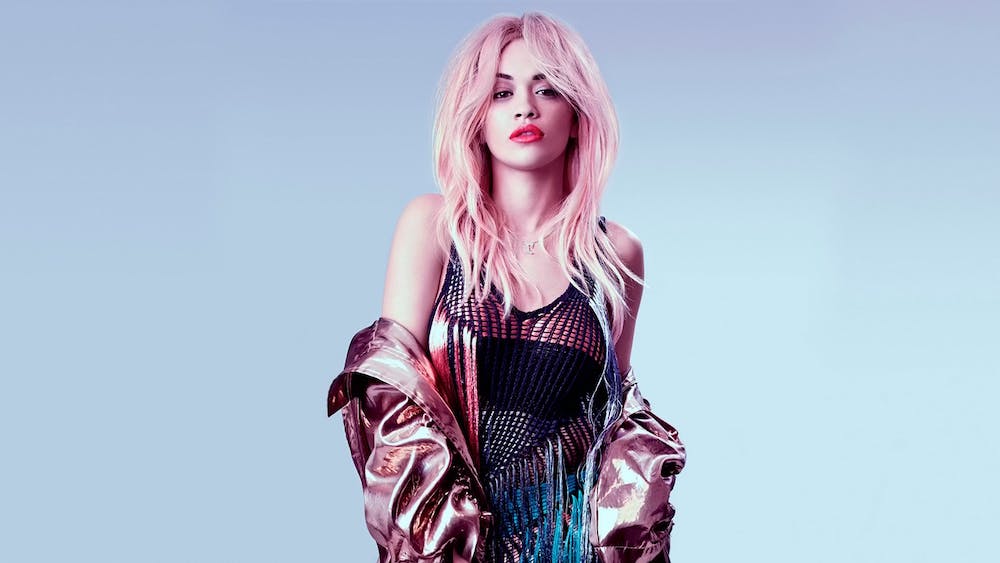 Follow Rita Ora to get alerts about upcoming events and special deals!

If there is a sense when Rita Ora walks into a room that a star has already been ordained from above then nobody appears to have told the young Londoner and future pop princess herself.

Without further ado, here are Rita Ora top 10 tracks of all time:

6. I Will Never Let You Down

9. Carry On (from the Original Motion Picture "POKÉMON Detective Pikachu")

If there is a sense when Rita Ora walks into a room that a star has already been ordained from above then nobody appears to have told the young Londoner and future pop princess herself. She has not an air or a grace about her. She greets the bar staff dotted in the hostelries of her neighborhood like old friends, mostly because they are. She bumps knuckles with the coat check chicks and management with the same egalitarian smile. Friends stop by for a brief ‘Hi’. Strangers look on with a discernible, barely contained ‘wow’. There is no mistaking the fact that Saturday night in Notting Hill is brightened by a touch of Rita’s special aura. She might not have been born this way, but she was recognizably named it.

Buzz acts come and go, but the pertinent feeling amongst those that have heard the results of her knockout first round in the recording studio as a bona fide solo star, accompanied by a blue chip roster of production hands, is that the effect Rita Ora has locally is about to translate to the upper terrains of the global pop market. A composite of street-smarts of the metropolitan life she was schooled in and pure, urgent, otherworldly star quality, she makes for a brilliantly contradictory mix.

Rita is one of the few British female singers that has emerged singing the opening bars of her career ready for world star status. So why is she so palpably shy of celebrating herself? "Because, you know what? I might seem confident about all this. It might be all I’ve ever wanted. It might even be all I’m ever any good at. But I am still really, really nervous about it all."

The fact that she has already made British chart history as the vocalist on one of the first ever drum and bass number one singles here, DJ Fresh’s "Hot Right Now", is almost brushed aside. "That was Fresh’s triumph," she gifts the producer, though it's clear her soaring vocals lend the propulsive tune a hefty portion of its personality. "He started a tiny drum and bass record label back in the day, now here he is with its first number one? That’s incredible for him. He owns that."

Regardless, the breakout smash success of her first number one looks very much like the dress rehearsal, the overture or prelude to the main act: Rita Ora solo. If "Hot Right Now" has temporarily rocked the British pop chart, her solo material is about to blow its mind.

Rita Ora began singing as at age six. This is where the magic started: "What drew me most to singing was the fact that I could make a noise that made me feel good about myself. I used to sing poems. It was just about doing something that inspired a reaction. It was about self-esteem, even back then, at a young age. I made a noise, the reaction was positive. Simple as that. I could sing my feelings. It was a new, exciting way of expressing myself. This brand new communication device. I understood the power of it straight away."

Rita was born the second of two girls in war-torn Kosovo at the start of the 90s. Her mother, father and elder sister decamped to London before her first birthday. "I wasn’t made to feel aware of what we had come from," she says, "but obviously when you grow up you get to learn something of what your parents went through to get you where you are today. I owe them everything."

Guided by her innate performance instinct, as well as her developing and hugely impressive powerhouse vocal range, she began dipping her toes into the local music industry in West London as an early teen. She managed to keep one step ahead of the stop-starts and false alarms of anyone treading tentatively into the shark pond of the London creative elite, enjoying notable highs.

Rita has a natural propensity toward mixing street-beats with pop. Her music is the contents of her young brain spilling out into song. The sounds she heard on the streets of Notting Hill, the brassy calypso and raga of Carnival mingling with the ringtone pop emanating from fast food joints; the splash and funk of the locale’s black music history engaging with the elegant noise of gentrification. If she sounds black and white, hard and soft, rich and poor, it is because her world is full of those competing factions too. She just learned to set it all to song. "My first record," she says, "had to sound exactly like my life."

Equally, her brilliantly developing sense of style is a dynamic and deliberate mismatch of high and low fashion. A ball-gown, Louis Vuitton shoes and a biker jacket make perfect sense to Rita’s unique fashion instinct. Costume jewelry is interchangeable with opulent bling. She says working with a stylist "is just like playing dressing up with your friends before you go for a night out, with a few more contacts." Rita love to rock platinum blonde hair. At the prospect of going brunette, she recalls: "I tried a wig on in Top Shop recently and just thought, never again." She also loves her signature red lipstick, and was delighted to see young fans at her recent London showcase who had already caught on to her signature red smackers. "They were all rocking red lipstick on the front row! Yes. Fierce."

Though Rita is signed to a modeling agency, it is clearly in music where she is about to shine. Her debut UK single "R.I.P." is a thrusting, compelling ode to lost love. Sitting around the peripheral borders of pop, R&B, rock, rave and dusted off with a sugar-coating of immaculate heartbreak, "R.I.P." thunders upon the very first listen. It was written by the current master-craftsman of relationship drama, hip hop connoisseur, Drake: "I had the hugest crush on Drake," she gushes. "Then I met him, sweetest guy ever and it evolved into a great friendship. I can’t believe he gave me such a great song!" The song was produced by the titans of underground/overground crossover British dance, Chase and Status and also features a guest rap from that pocket dynamo, Tinie Tempah. "I wanted to keep it British," Rita explains. "I need to rep for the UK!" Yet for all its invincible, diamond-plated credentials, this is very much Rita Ora’s opening shot, and she really does own it.

Rita’s debut U.S. single, “How We Do (Party),” is an infectious pop-rock party anthem paired with her stunning vocals. The single first premiered on New York’s Z100 on March 23rd and quickly became Just Jared & KIIS FM’s Pick of the Week. Lyrically, “How We Do (Party)” celebrates being young and having fun, as Rita sings, “We're tearing up the town, 'cause that's just how we do" over production duo The Runners' irresistible guitar and drum driven beats. Rita and The Runners have created one of the most addictive tunes of 2012, and "How We Do (Party)" is sure to be an essential on every playlist this summer. "I had to learn my pop instinct," she says. "The lyrics had to be tough because the song is so immediate. I wanted that twist. This is about the feeling of waking up in the morning and wanting to take another whiskey shot," she says, looking embarrassed for all of five seconds, "We’ve all been there. Haven’t we?"

There’s plenty more where that came from. Rita Ora has fashioned a debut album that is ready to stake its claim on the world stage. She has become a huge priority for JAY Z’s Roc Nation. The music icon introduced her personally to the American public with a surprise visit to one of the US’s premier radio stations Z100 earlier this year. "I was so nervous!’ she enthuses "but so excited too!".

The superstar cast of artists that have lined up to work with her reads like an award ceremony of modern urban musical excellence, from the left-field margins right to the heart of mainstream, including Diplo, Switch, Stargate, and The-Dream, in addition to Chase & Status and Drake. The result is a monopoly stronghold on future pop supremacy. "I can’t believe how lucky I’ve been," she says, "that these people have even given me the time of day, let alone clicked with me in making my album." She name drops "Rock The Life" – a ridiculously catchy, mid-tempo R&B growler – and the beautifully delivered ballad, "Love and War" as her other album favorites, before the world picks its own.

It’s time for Rita Ora to dive in headfirst and see how her unique talent plays out. With support slots on the DJ Fresh and Coldplay tours this year she’s ready. ‘I am so nervous,’ she repeats. ‘Now is when I’m put to the test. I don’t even know what to expect. I have to dive in. I’ve just got to do it.’

No upcoming events with Rita Ora