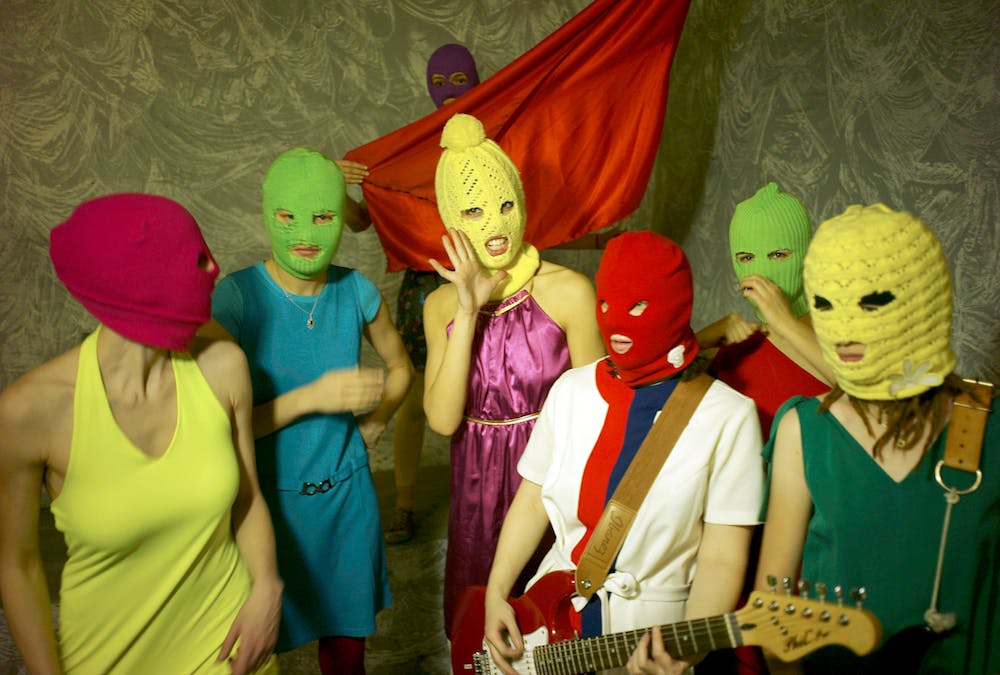 Follow Pussy Riot to get alerts about upcoming events and special deals!

Pussy Riot is a Russian feminist protest punk rock group based in Moscow.

Pussy Riot has played in major festivals like Life is Beautiful, Outside Lands, Rifflandia

Without further ado, here are Pussy Riot top 10 tracks of all time:

Pussy Riot is a Russian feminist protest punk rock group based in Moscow. Founded in August 2011, it has had a variable membership of approximately 11 women  ranging in age from about 20 to 33 (as of 2012). The group staged unauthorized provocative guerrilla performances in public places, performances that were filmed as music videos and posted on the Internet. The collective's lyrical themes included feminism, LGBT rights, and opposition to Russian President Vladimir Putin, whom the group considered to be a dictator, and his policies. These themes also encompassed Putin's links to the leadership of the Russian Orthodox Church.

The group gained global notoriety when five members of the group staged a performance inside Moscow's Cathedral of Christ the Savior on February 21, 2012. The group's actions were condemned as sacrilegious by the Orthodox clergy and eventually stopped by church security officials. The women said their protest was directed at the Orthodox Church leaders' support for Putin during his election campaign. On March 3, 2012, two of the group members, Nadezhda Tolokonnikova and Maria Alyokhina, were arrested and charged with hooliganism. A third member, Yekaterina Samutsevich, was arrested on March 16. Denied bail, they were held in custody until their trial began in late July. On August 17, 2012, the three members were convicted of "hooliganism motivated by religious hatred", and each was sentenced to two years' imprisonment. On October 10, following an appeal, Samutsevich was freed on probation and her sentence suspended. The sentences of the other two women were upheld.

The trial and sentence attracted considerable attention and criticism, particularly in the West. The case was adopted by human-rights groups, including Amnesty International, which designated the women as prisoners of conscience, and by a number of prominent entertainers. Public opinion in Russia was generally less sympathetic towards them. Having served 21 months, Tolokonnikova and Alyokhina were released on December 23, 2013, after the State Duma approved an amnesty.

In February 2014, a statement was made anonymously on behalf of some Pussy Riot members that both Alyokhina and Tolokonnikova were no longer members. However, both were among the group that performed as Pussy Riot during the Winter Olympics in Sochi, where group members were attacked with whips and pepper spray by Cossacks who were employed as security guards. On March 6, 2014, Tolokonnikova and Alyokhina were assaulted and sprayed with green paint by local youths in Nizhny Novgorod.

Speaking as much to western European and North American audiences as to Russian audiences, in 2016 Pussy Riot anticipated Donald Trump's victory two weeks before the outcome of the 2016 United States presidential election was declared and released "Make America Great Again", depicting a dystopian world where a President Trump enforces his values through beatings, shaming, and branding by stormtroopers. In describing the video, Rolling Stone magazine noted that "jaunty, carefree music contrasts with the brutal events depicted on screen."

No upcoming events with Pussy Riot