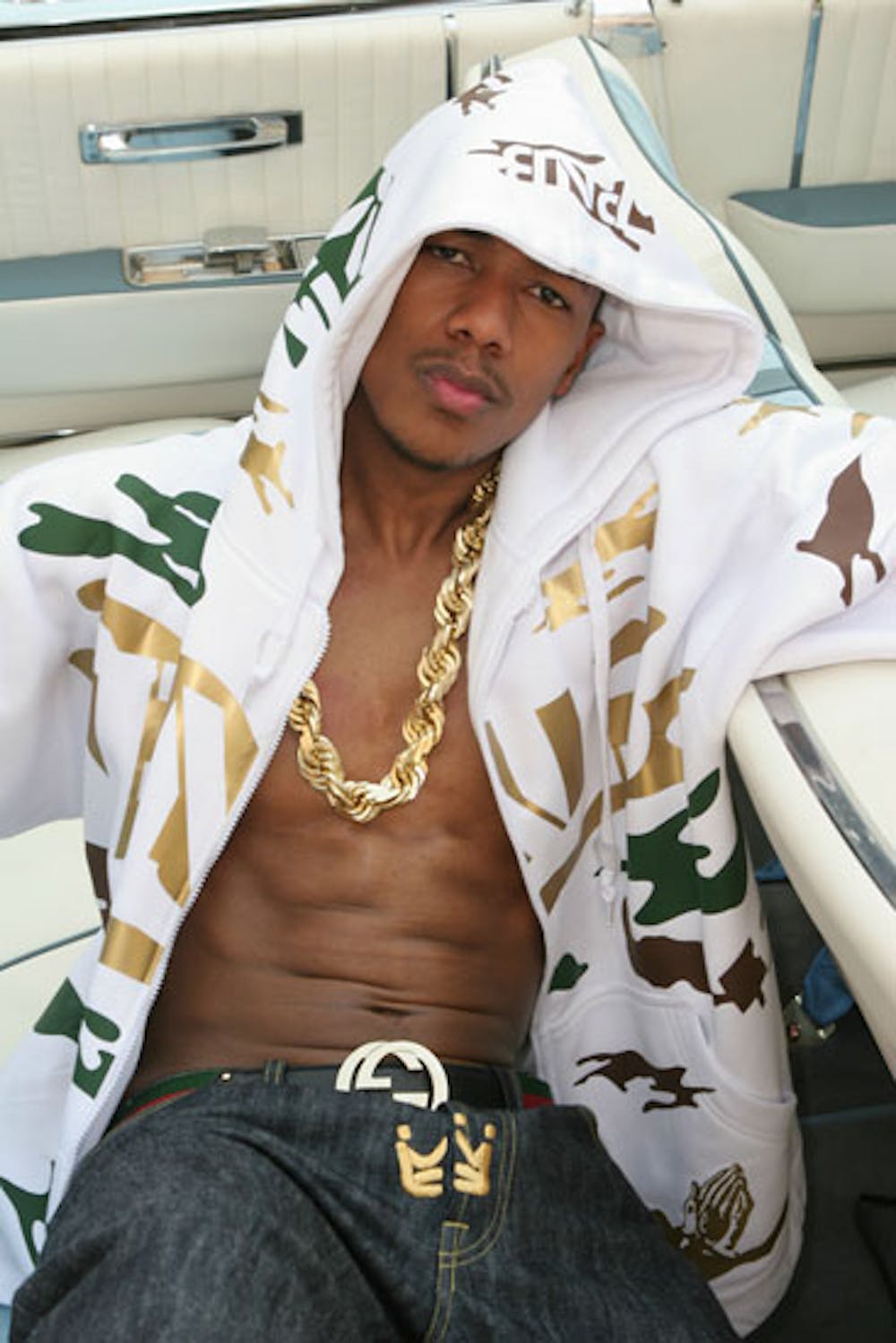 Follow Nick Cannon to get alerts about upcoming events and special deals!

Nick Cannon has performed in venues such as: LIV, The Exchange, STORY, Staples Center, Parq, Exchange, The Pool After Dark, Pure

Without further ado, here are Nick Cannon top 10 tracks of all time:

At the age of 27 years old Nick Cannon is a successful rapper, writer, comedian, film star and executive producer of his very own hit show " The Nick Cannon Show". Now he is ready for the next stage of his career with the release of his debut album.

A San Diego native, Nick Cannon began performing at eight years of age after his grandfather left him several instruments as a gift. Through what Nick Cannon recalls as " a lot of trial and failure" he recorded his first song at home on his boom box. Soon after Cannon took the stage to perform his music along with stand up comedy routines. He then founded the San Diego Based Rap Duo " Da Bomb Squad". Members were Nick and his best friend Steve Groves. The duo's hip hop grooves rocked venues such as " Billboard Live", opening for superstars such as Will Smith, Montell Jordan and LFO. Cannon's full time music career, however would have to wait as opportunities in stage and television came pouring in.

Nick Cannon headed for Hollywood when he was 16 years old and landed gigs at world renowned comedy venues including The Improv, The Laugh Factory and the Comedy Store. Cannon went on to share the stage with the likes of Chris Tucker, Damon Wayons and Chris Rock. Nick landed his first television gig as a stand-up audience warm-up for the long running Nickelodeon hit show All That. Producers quickly recognized Cannon's calling was in front of the camera. He became a regular on the show as well as the co-host of Nickelodeon's All That and More Music and More (47 City tour), which featured artists such as Bewitched, Blaque, A-teens, LFO, Monica, 98 Degrees and more. Cannon's performances on Nickelodeon's Teen Nick In Concert series enjoyed audiences of over half a million fans. But it's his work as a co-host on Nickelodeons Snick House and as host of the music-based Teen Nick programming block that catapulted to him to leading man status. This path culminated in the creation of The Nick Cannon Show featuring Cannon " taking over" real life situations such as taking over family dinners with Master P and Lil Romeo, a baseball game or lunch time at a high school cafeteria. Through the show Cannon got a chance to "Mix it Up" with celebrity guests such as Eddie Murphy, Britney Spears, Usher, The Sopranos Joe Pantaliono and Mary J. Blige.

Cannon's powerful stage presence has captivated more than just the pint sized audiences.
While he enjoyed tremendous success on Nickelodeon, Cannon has been catapulted to the big screen. He landed his first leading role in the classic feature film "Drumline." In the film he plays a talented drummer from Harlem who receives a full scholarship to a college in Atlanta. The soundtrack on Jive Records includes Nick Cannon's " I'm Scared of You." He also made a cameo appearance as an autopsy agent on " Men in Black II". Television, film and music superstar Will Smith has served as Cannon's mentor, collaborating with him on a television pilot called " Loose Cannon." "Will has been such a positive force in my life" says Cannon. " He told me I reminded him of himself when he was younger. That's the most incredible compliment anyone could ever give me!". Further following in Smith's footsteps, Nick recorded a cover of Smith's "Parents Just Don't Understand" with Lil Romeo and 3LW for the Paramount Pictures/Nickelodeon feature film "Jimmy Neutron: Boy Genius Soundtrack". Cannon has appeared on and even guest hosted MT V's Total Request Live.

Also to add to the list of accomplishments is Nick's Show "Nick Cannon Presents Wild N Out". In one of his weekly drives from Los Angeles to San Diego where his family resides, Nick thought of the Wild n Out show in his head, took his own finances shot the show, shopped it out to various networks and behold the funny MTV Hip Hop Comedy Show Wild N out is born!

Other credits include a guest starring role on UPN's "The Parkers", "Love Don't Cost a Thing" which is a remake of the classic " Can't Buy Me Love" the 1987 James Foley directed film about an unpopular kid who hires a cheerleader to pretend she is his girlfriend in order to improve his social status.

To add to the list of accomplishments Nick is the CEO of his own record label " Can I Ball Records" in which he has partnered with Universal Motown. He has also purchased a successful Hip Hop Clothing Line PNB Nation in which he will incorporate his own clothing line along with the existing hot styles PNB has already! Stay tuned for the fashion show and launch in Spring 2006! He is also working on producing along with musical and television genius Quincy Jones on creating a Nickelodeon children's show called the "Giggle Club". Also look for Nick in the upcoming gritty independent film "Weapons" and the intriguing and powerful story of the assassination of Robert Kennedy "Bobby" both due out in 2006. Nick is also working on and upcoming self produced boxing film. Another major accomplishment was his directorial debut of the powerful video "Can I Live" based on his life. This video has won numerous awards. Look for Nick's second album "Stages" due out in Spring 2006.

Cannon was also the voice of Louis the Mouse in the Summer Movie " Garfield" and he shared the big screen with Richard Gere, Jennifer Lopez and Susan Sarandon in " Shall We Dance". Nick also starred in the Feature Films "Roll Bounce" and " Underclassman" in which Cannon wrote the screen play and Executive Produced.

Nick is also "Brer Rabbit" which was an animated feature film that came out in the Spring of 2006. Nick is also "Officer Lister" in the animated feature film "Monster House" which was a huge hit the summer of 2006. To add to Nick's resume for 2006 he has the #1 hit show on MTV "Nick Cannon Presents Wild N Out" which is well into its third season. He is now working on his second show on MTV called "Short Circutz" which is due out in the Spring of 2007! The fall of 2006 Nick had a huge grand opening of his new Flagship Store PNB Nation in Los Angeles!

In May of 2007 Nick made history. He was honored at the World Renown Cannes Film Festival and won the coveted Award for "Breakthrough Actor of the Year" for his amazing performance in the Ground Breaking 2006 Film "Bobby" which is about the assassination of Robert Kennedy, produced and written by Emilio Estevez. He is the first African American Actor to have ever received such a prestigious award. Nick has also created and Executive Produced the Nickelodeon Show called "Star Camp" along with Legendary producer Quincy Jones which follows the lives of the most talented children around and Nick is their mentor and is on a mission to create a Super Group of 10 talented kid rappers,singers and dancers and mold them into multimedia mega stars! The grueling hours of recording, writing and physical conditioning are just some of the challenges that a star's schedule demands. Luckily Nick is there to show them the ropes! Welcome to Star Camp!

Nick now has his own Production Company called Mr. Renaissance. He will be producing and creating TV shows and films with MTV, and MTV Films in conjunction with Paramount.

No upcoming events with Nick Cannon