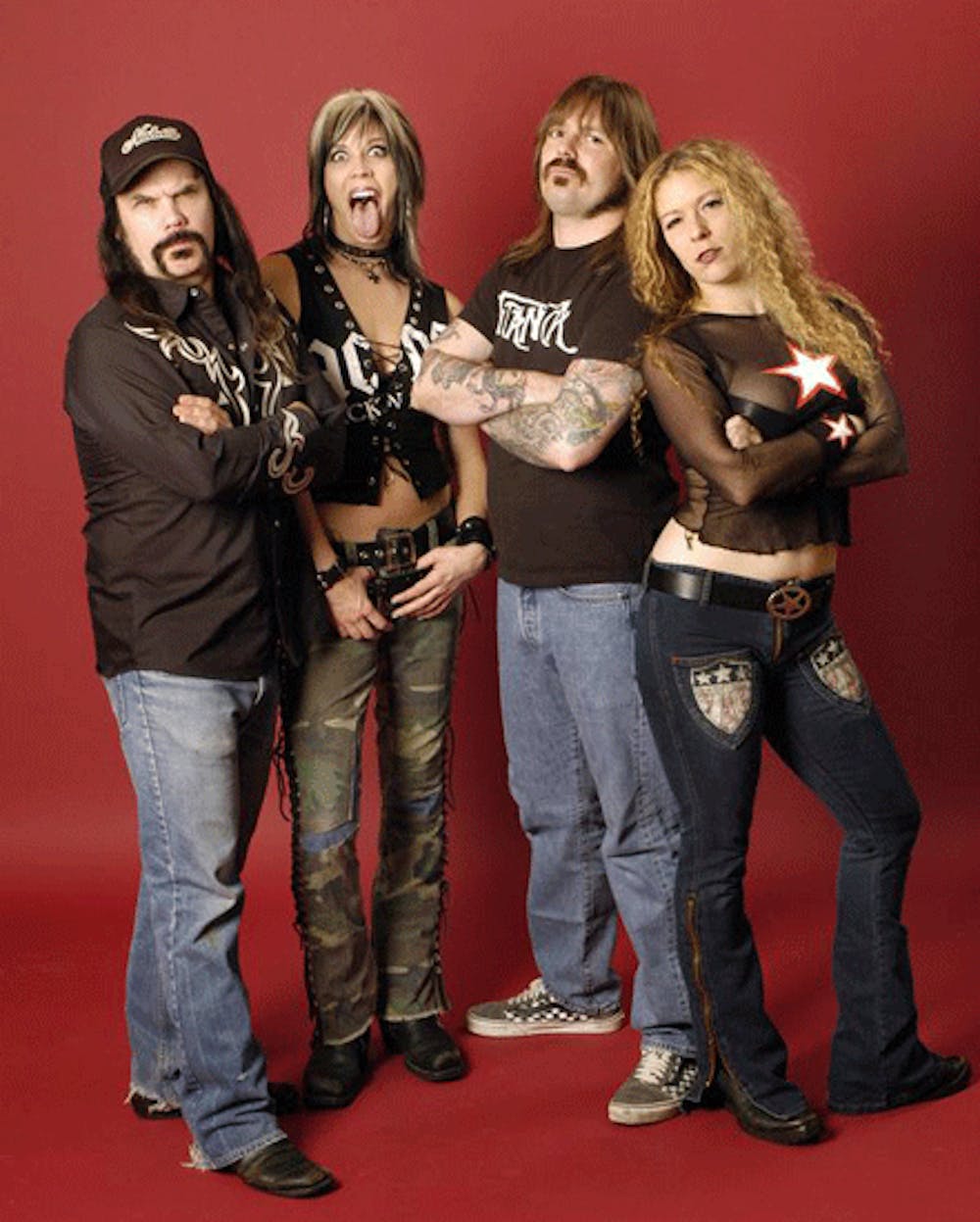 Follow Nashville Pussy to get alerts about upcoming events and special deals!

It’s been said that the devil has all the best tunes, but that’s not the case anymore, since a lil’ ol’ band from Georgia -- known to friends and followers as Nashville Pussy -- found a way to pick the lock on that storehouse of demonic sonics and make off with some of its most incendiary contents. While they’ve been at it for the better part of the decade, the band -- fronted by the hard-livin’ hard-rockin’ husband/wife team of Blaine Cartwright and Ruyter Suys -- has never been more intensely supercharged than on Get Some.

Nashville Pussy has performed in venues such as: Exit/In, The Observatory, The Parish

Without further ado, here are Nashville Pussy top 10 tracks of all time:

It’s been said that the devil has all the best tunes, but that’s not the case anymore, since a lil’ ol’ band from Georgia -- known to friends and followers as Nashville Pussy -- found a way to pick the lock on that storehouse of demonic sonics and make off with some of its most incendiary contents.

While they’ve been at it for the better part of the decade, the band -- fronted by the hard-livin’ hard-rockin’ husband/wife team of Blaine Cartwright and Ruyter Suys -- has never been more intensely supercharged than on Get Some. The disc, their fourth full-length and first for Spitfire, offers heaping helpings of neck-snapping guitar riffage and a full-on embrace of the sort of good-time decadence that’s part and parcel of life below the Mason-Dixon line. It also shows off Cartwright's razor-sharp wit, which permeates the disc with laugh-out-loud moments that'd do John Belushi proud.

“Most of this album is based around life in Atlanta, because there’s something about the city that encourages people to just get crazy,” says singer/guitarist Cartwright. “You’ve got all sorts of music that came from the deep south, from James Brown to Lynyrd Skynyrd, and it’s all whoop it up music. It’s gotta be -- it’s too hot to hate.”

Get Some, which was helmed by producer Daniel Rey (Ramones, White Zombie, Masters of Reality), ratchets up the heat even further. In songs like “Good Night for a Heart Attack” (which Cartwright describes as “a Van Halen party song , but funnier”) and “Lazy White Boy,” the band brings the noise with no-bullshit, blue-collar attitude -- and a goodly bit of funk.

That latter element is the key to Get Some’s appeal. The groove-conscious tone is buoyed by the joined-at-the-hip rhythms kicked out by longtime drummer Jeremy Thompson and recently-recruited bassist Karen Cuda (who was introduced to the band by pals in the Streetwalkin’ Cheetahs). The booming low end they supply makes it all-but-impossible to keep the booty from shakin’ -- particularly on a cover of Ike and Tina Turner’s funk classic “Nutbush City Limits.”

“We’ve been trying to nail that one for years,” Suys reveals. “It’s a natural, since Blaine and I have that married-couple thing going on, but the real reason I’ve always been into doing it is that it’s one of the first songs AC/DC and Brian Johnson did the first time they jammed together.”

The “married couple thing” is the glue that’s held Nashville Pussy together through several lineup changes and a passel of label affiliations. Cartwright (a veteran of high-octane roots-punkers Nine Pound Hammer) and Suys (a Canadian native who calls herself “a born-again southerner”) formed the band in 1996, quickly churning out the feral, claws-out Let Them Eat Pussy.

That disc earned the band a Grammy nomination (and the chance to treat the Goth nation to a shot of Southern Discomfort when they toured with Marilyn Manson). It also brought them accolades from a head-spinningly diverse array of musical peers, from Motorhead mainman Lemmy to eternal outlaw Steve Earle.

The turn of the millennium only strengthened Nashville Pussy’s hold on the pleasure center -- as demonstrated by the 151-proof High as Hell, which propelled them through a slew of road trips criss-crossing the lower 48. That pace tested their mettle, but as Suys tells it, it only strengthened her and Cartwright’s unified desire to spike the Kool-Aid of audiences everywhere with sex, sin and synapse-destroying rock and roll.

That mind (not to mention speaker) blowing assault is led by Suys’ six-string slinging, which alternates between pounding the listener over the head and engaging in full-on sonic seduction. That’s a testament to her encyclopedic knowledge of riffs -- as she puts it, “I listen to stuff from all over the map … B.B. King, Funkadelic, Ted Nugent” -- as well as her uncanny ability to translate those influences into a style that’s distinctly recognizable as Nashville Pussy.

“The thing about this album,” she says, “is that we’re having more fun than we’ve ever had. Me, Blaine and Jeremy have always had a ball, and now, with Karen, we’re finally reaping our rewards. We’re enjoying ourselves, and I think that shows in the music.”

After four albums and hundreds of nights blasting eardrums around the world, Cartwright says the band hasn’t moved too far -- in terms of attitude, at least -- from where it started. “Your thousandth joint might not be as amazing as your first, but you’ve gotta keep trying,” he says with a laugh. “At least I’ve gotta keep trying. I’m no quitter!”

And in terms of sound? Furrowed-brow types might throw around all sorts of fancy terminology in describing how Nashville Pussy’s hard-living hard rock cuts to the quick, but Cartwright prefers to put it in terms just about everyone can understand.

“It’s like AC/DC making out with Motorhead while Lynyrd Skynyrd watches.”

No upcoming events with Nashville Pussy