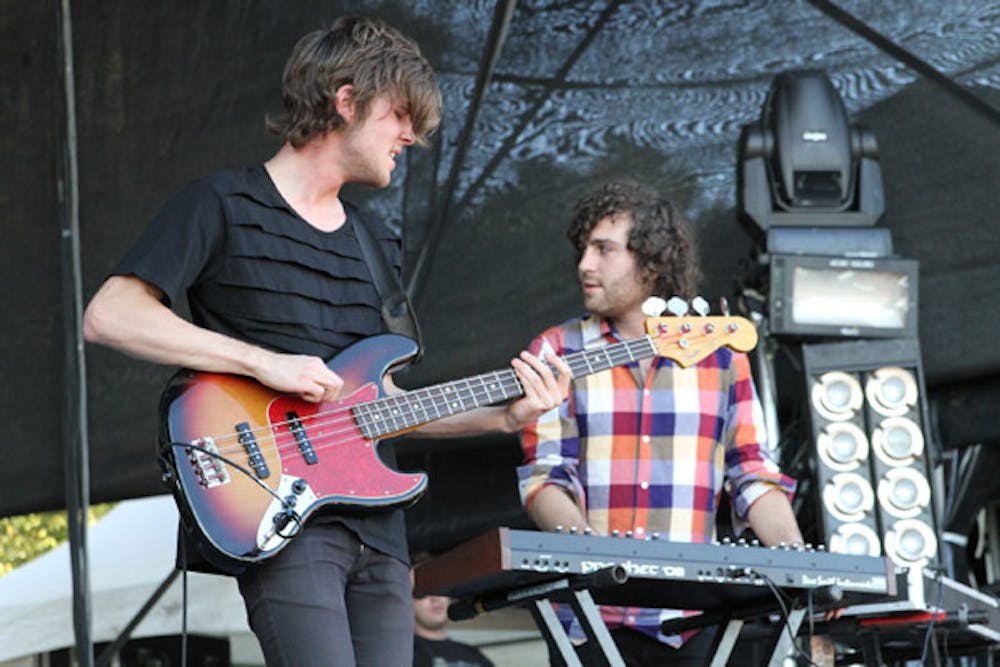 Follow Miami Horror to get alerts about upcoming events and special deals!

After years in the making here at last is Illumination, the fully realised debut album from Melbourne’s favourite psychedelic indie-electronic adventurers Miami Horror.

Without further ado, here are Miami Horror top 10 tracks of all time:

5. Luv Is Not Enough

After years in the making here at last is Illumination, the fully realised debut album from Melbourne’s favourite psychedelic indie-electronic adventurers Miami Horror. With Illumination, Miami Horror has delivered on two years of teeth-cutting live shows and an ever escalating wave of buzz that’s made the group bonafide blog darlings the world over. But what’s most amazing about the grand arrival of Illumination is that the roots of the record stretch back countless moons to when Miami Horror began as just one synthesizer-obsessed producer huddled over a laptop in a bedroom-come-studio and the album itself just a spark waiting to be lit.

The afore mentioned synth tragic was, and let’s face it still is, electronic young gun Ben Plant, who kick started Miami Horror out of a love of Roland keyboards and French house, landing himself on Pitchfork’s hot-list overnight and copping a barrage of high profile remix requests from the likes of Datarock, PNAU and The Presets.

Yet it was while Ben was punching out 2008’s epochal Bravado EP that Miami Horror took off in a completely new and different direction. Characteristically wanting to flex his creative muscle and avoid the limitations of being stereotyped as simply a dance or electro act, Ben rewired Miami Horror’s genetic makeup, deputising the talents of Josh Moriarty, Aaron Shanahan and Daniel Whitechurch to form a new live band persona of Miami Horror, a whole new beast immeasurably more exciting than before.

“It started out that I didn’t want to have any guitar on the album besides a little funk guitar or disco bass,” Ben grins while explaining the turning point for Miami Horror’s evolution. “But then Josh came in and started playing all these other parts that sounded amazing. Paired with what I was working on, nobody was doing anything like it, so I knew we had to turn those sounds into a live thing and just go wild.”

It worked. Since the switch, Miami Horror has launched into dizzying new stratospheres, their well-polished chops as a group making for some unmissable sets at Australia’s biggest festivals, and that’s not to mention some A-list support slot call ups for everyone from Phoenix, Friendly Fires and La Roux to a hand-picked hook up from Lily Allen.

All this time Ben had been further noodling away at Miami Horror’s long-awaited debut disc and with the vision for a fully-blown and creatively shared band now fulfilled Miami Horror was able to pour all of their energy into Illumination, the record that’s taken Miami Horror years to perfect and Ben a whole lifetime to get right.

Bunkering down in Ben’s own studio in Melbourne, Illumination was recorded in typical Miami Horror fashion with the band opening themselves up to new styles and approaches which saw them call in a cast of guest stars including Swedish singer MAI, Melbourne based chanteuse Kimbra, Dappled Cities’ wordsmith Tim Derricourt for a lyrical assist and also Neon Indian and Vega prodigy Alan Palomo who Ben flew out from the US to add his distinctive haze to multiple tunes (Soft Light, Holidays, Ultraviolet).

As well as crafting a truly classic album that begs to be consumed from beginning to end to fully uncover all the layers and engrossing sonic textures of each tune, Ben says the aim with Illumination was to present an accurate portrait of the band’s current core and not make things too “glossy” and “hi-fi”, with Ben himself producing and engineering the album from the confines of his bedroom.

As such, listening to Illumination is like a guided tour of Miami Horror’s combined minds, with enormous flying grooves gliding through the speakers alongside nods to the deities of French house and vintage synth explorers like Giorgio Moroder and Jan Hammer, all mixed and muddled up with slabs of melting, fuzzy psychedelica, some wandering kraut rock bass-lines, enough star-gazing hooks to make Electric Light Orchestra blush, plenty of ear-catching pop swagger and Ben’s own studied cinematic aesthetics. Never content to stand still, Miami Horror ambitiously test their boundaries across the album, experimenting with lush, almost chillwave instrumentals (see the gorgeous Infinite Canyons), futuristic disco gems (I Look To You), summer-bound party jams (Holidays) and anthem-sized synth epics (Sometimes).

Testing the limits of the Miami Horror sound evidently came naturally for the group, with Ben admitting that the band weren’t afraid to cut loose and indulge their desires to blend electronic sounds with bristling psych-pop flourishes.

“At first I didn’t think it was possible for us to do something like that, but more and more we found ourselves making things that sounded a bit fuzzy.
People don’t believe me when I tell them that we use slide guitar on five tracks because that just doesn’t sound like us,” Ben says beaming.
“It’s not like Chris Isaak or anything though, we just call it disco-influenced prog-pop. I don’t think that’s a genre, but it works for us!”

Although the band themselves admit to a serious case of perfectionism, spending months layering, refining, tweaking and endlessly perfecting Illumination, they’re at last ready to launch it out to eagerly awaiting ears.

“We’ve spent about ten months alone mixing the album, which is a process that should normally take two weeks,” Ben laughs. “We always just said ‘f**k it, we have to make the album that we want to make’ and this is it. We made it.”

Yes, this is their moment. And though it seemed like an electro-dreamer’s distant fantasy four years ago, Miami Horror’s same excited sense of wonder has only ballooned from then to now. If you haven’t already heard the gospel, expect to be converted to the cause any second now.