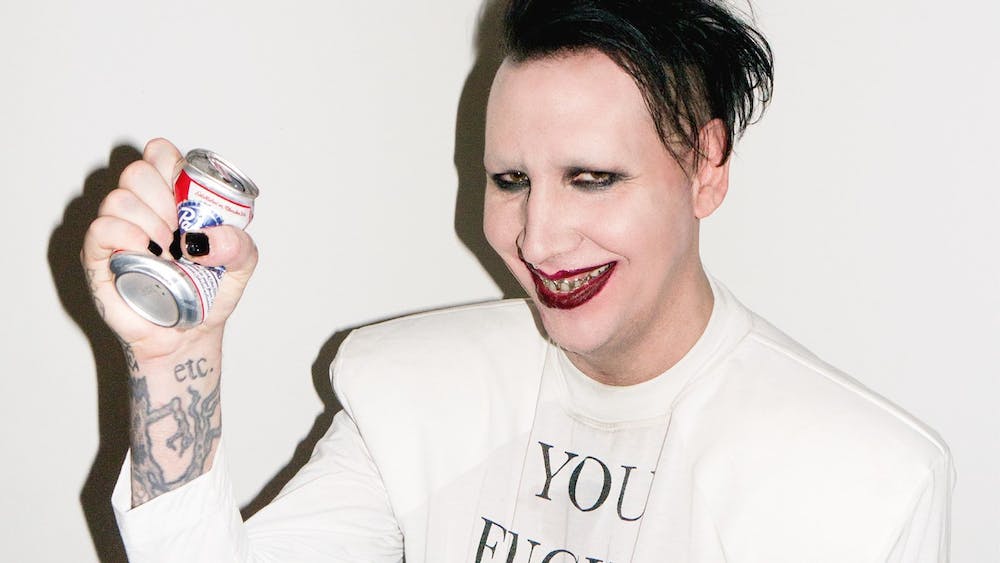 Follow Marilyn Manson to get alerts about upcoming events and special deals!

Love him or hate him, the self-proclaimed "Antichrist Superstar" Marilyn Manson was indisputably among the most notorious and controversial entertainers of the 1990s. Celebrated by supporters as a crusader for free speech and denounced by detractors as little more than a poor man's Alice Cooper, Manson was the latest in a long line of shock rockers, rising to the top of the charts on a platform of sex, drugs and Satanism.

Marilyn Manson has performed in venues such as: Palladium, Fillmore Auditorium, House of Blues, Myth, Rebel

Without further ado, here are Marilyn Manson top 10 tracks of all time:

2. Sweet Dreams (Are Made Of This)

Love him or hate him, the self-proclaimed "Antichrist Superstar" Marilyn Manson was indisputably among the most notorious and controversial entertainers of the 1990s.

Celebrated by supporters as a crusader for free speech and denounced by detractors as little more than a poor man's Alice Cooper, Manson was the latest in a long line of shock rockers, rising to the top of the charts on a platform of sex, drugs and Satanism. Though widely dismissed by critics, his brand of metal nevertheless struck a major chord with the youth market -- on the strength of a masterfully orchestrated marketing campaign, he became a mainstream anti-hero, much to the chagrin of conservative politicians and concerned parents. Manson was born Brian Warner in Canton, Ohio; at the age of 18, he relocated to Tampa Bay, Florida, working there as a music journalist. In 1989, he became friends with guitarist and fellow outsider Scott Mitchell; they decided to form a band, with Mitchell rechristening himself Daisy Berkowitz and Warner adopting the name Marilyn Manson.

With the addition of bassist Gidget Gein and keyboardist Madonna Wayne-Gacy, the group -- originally dubbed Marilyn Manson and the Spooky Kids -- begin self-releasing cassettes and playing gigs, their Gothic stage show notable for Manson's elaborate make-up and homemade special effects. Jettisoning their drum machine in favor of one Sara Lee Lucas, the band's sound began taking on a harder edge, and by 1992 they were among the most popular acts in the South Florida area. In 1993, Nine Inch Nails' Trent Reznor came calling, offering both a contract with his Nothing Records label as well as the chance to open for NIN the following spring; Manson accepted both offers, and the group's debut LP, Portrait of an American Family, appeared during the summer of 1994. With new bassist Twiggy Ramirez replacing Gein, the group's notoriety began to soar -- most infamously, during an appearance in Salt Lake City, Manson ripped apart a copy of the Book of Mormon while on-stage. The Church of Satan's founder Anton LaVey also bestowed upon him the title of "Reverend."

While some onlookers dismissed Manson's behavior as crass audience manipulation, his cult following -- comprised almost entirely of disaffected white suburban teens -- continued to swell, and with the release of the 1995's Smells Like Children EP the band broke into the mainstream, propelled by their hit cover of the Eurythmics' "Sweet Dreams (Are Made of This)." Berkowitz quit a short time later, and was replaced by guitarist Zim Zum; their next LP, 1996's Antichrist Superstar, debuted at the number three spot on the pop album charts. As Manson's popularity grew, so did the furor surrounding him -- his concerts were regularly picketed by civic groups, and his music was the subject of widespread attacks from the right-wing and religious fronts. Again, however, his quick embrace of the media spotlight called into question the true sincerity of his revolutionary aims -- with a cover story in Rolling Stone and a best-selling autobiography, The Long Hard Road Out of Hell, some onlookers doubted whether Manson had sold his soul to Satan, or just sold his soul, period. The glam-inspired Mechanical Animals followed in 1998, with the resulting tour yielding the live Last Tour on Earth a year later.

Holy Wood (In the Shadow of the Valley of Death) came out at the end of 2000. The band toured to support the album in 2001 and during a July show in Michigan, Manson was charged with criminal sexual conduct after performing an alleged offensive act on a security guard. December saw Manson's version of "Tainted Love" appear on the Not Another Teen Movie soundtrack while another security guard filed a civil suit alleging Manson had rubbed his pelvis on the guard's head. The July 2001 sexual conduct charges were lowered to a misdemeanor in January of 2002 and the civil suit was dropped soon after. May of 2003 saw the release of The Golden Age of Grotesque, which spent a week on top of the album charts and ended up on more than a few critics' year-end Top Ten lists. In April of 2004 the album Lunch Boxes and Choklit Cows appeared, credited to Marilyn Manson & the Spooky Kids -- Spooky Kids being the name of Manson's earliest band. Manson fought the release and court-ordered some artwork removed that was too close to the art to which the singer owned the copyright. At the end of September the Lest We Forget collection was released, covering the highlights of Manson's career and including a new cover version of Depeche Mode's "Personal Jesus."

After his marriage with model Dita Von Teese went downhill, Von Teese effectively left Marilyn and moved out of his house. Manson sunk into a bit of depression, and was subject to "the classic rock and roll scenario of people robbing me behind my back", as Manson himself put it. Marilyn left his studio environment and got a fully-furnished studio home, where he could literally "write a song, walk down two doors and record it." Commenting on the new creative environment, Manson feels "liberated." Marilyn plans on releasing a new album, "Eat Me, Drink Me" and has released a song from it titled "If I Was Your Vampire". Marilyn's full intention thru-out the album is to seduce someone, but he hasn't mentioned who. Marilyn and his band will be performing a World Tour upon the release of the new album.

No upcoming events with Marilyn Manson