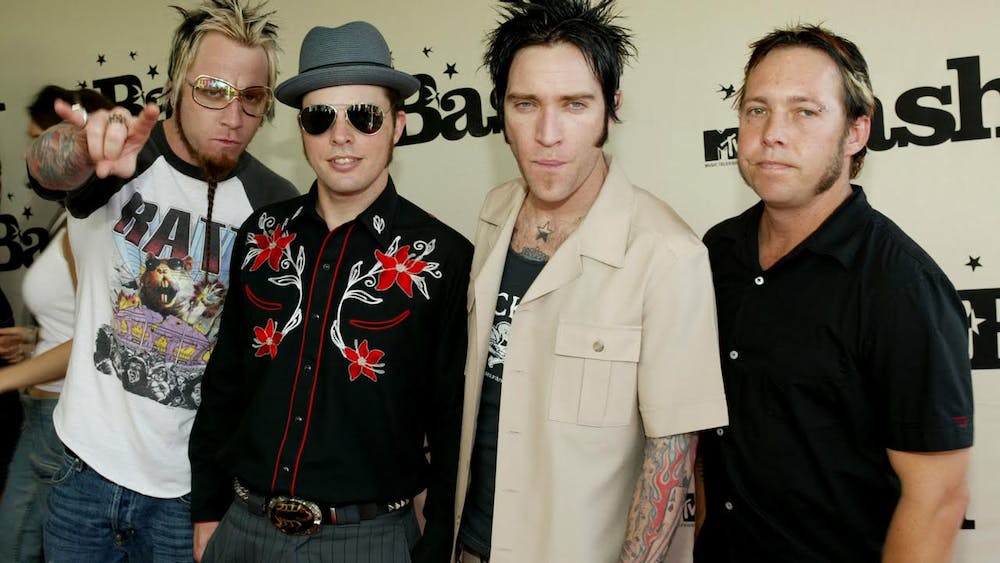 Follow Lit to get alerts about upcoming events and special deals!

Lit has performed in venues such as: House of Blues, O2 Academy, O2 Academy Glasgow

Without further ado, here are Lit top 10 tracks of all time:

1. My Own Worst Enemy

2. My Own Worst Enemy

10. Kicked off the Plane

"It's not our job to sell records," states soft-spoken Lit front man A.Jay Popoff. "Our job is to write good songs and kick ass live. If we're not doing that, then we've failed."

On their new self-titled fourth CD, this quartet has not only done their job-- they might just be due a promotion. They've delivered a stellar 13-song disc, full of personal, passionate and diverse songs, without a thought to trends. Of course, Lit can't seem to stop selling records either, starting the winning streak with 1999's major-label debut, A Place In the Sun yielding the smash singles "My Own Worst Enemy," which held the number one position for three months, and received a Billboard Music Award for the biggest Modern Rock Song of 1999, "Ziplock "(11) and "Miserable", which was among the top ten most played songs of 2000 and featured Pamela Anderson in the video. Two other CDs, 1997's Tripping the Light Fantastic, and 2001's Atomic, which spawned another top ten hit with "Lipstick & Bruises", platinum sales, world tours and videos as clever as the band's witty lyrics cemented Lit's deserved success. Circa 2004, with the release of Lit, and the first single "Looks Like They Were Right," the band broke from the past in nearly every way.

The Orange County, California-based lineup of A.Jay on vocals, Jeremy on guitars, Kevin Baldes on bass, and Allen Shellenberger on drums, together nearly 15 years, have in their own manner, begun anew with Lit. Now on Nitrus/DRT/Dirty Martini Recordings after a productive stint with RCA, the band produced Lit themselves, and did it, to paraphrase Sinatra, "their way," as Jeremy explains: "We went back to our warehouse in Anaheim, feeling free, jamming, for the reasons we started playing in the first place. No deadlines, no expectations, and no one polluting the process; just getting together to have fun and write songs. That said, this record is a little more serious than our others," furthers the axeman. With songs like 'Bulletproof,' about a friend who committed suicide, and 'Lullaby," a song written for his son, "there's not a whole lot of tongue-in-cheek goin' on."

However, Lit fans need not be concerned. The new disc possesses everything that made and makes Lit great. From the bouncy musicality and self-directed jab that is "Looks Like They Were Right," to the heaviness and major choruses of "Too Fast For A U Turn," to the irresistible, musically innocent "Forever Begins Right Now," with its musical nods to Elvis Costello, Lit have created a musical and lyrical time capsule of their past couple years.

"We just write and then see what direction it takes us," explains A.Jay of the process. "There was a period of a few months that were pretty rough, for the whole band, and you hear that in the record. There's a darker side; we do more sharing of our personal turmoil. 'Times Like This,' 'Hard to Find' and 'Throwaway,' are that way." In addition to soul-baring songs, Lit was likewise recorded somewhat naked, musically speaking, that is. The whole record was written, recorded and mixed in Orange County. Plus, the classic band photo on the CD cover is in line with the sort of basic "this is Lit" vibe the band was feeling. That stripped-down approach also went for the actual "sounds" on Lit.

"This record is different, because we actually used our live touring gear," explains Jeremy. "On the last two records I had a wall of amps, then we'd borrow more, rent the drums that everyone else rented for their record, companies would send us stuff, and we'd mix and blend; such an ordeal and process. I always was happy with the sound, but this time I grabbed my Fender Telecaster and used my Marshall and my pedals and just tried to capture our live sound. As a result, bass player Kevin Baldes believes, "This record is more rocking than our other records. The guitars are thicker, everything is just more 'real' sounding."

The "real sound" matches the gut-level "weird combination of personal issues and drama," that went into the writing on Lit, which included being first-time dads for both Jeremy and his brother, A.Jay, plus the mixed emotions of opting to sever ties with a major label. Jeremy finds, as always, the perfect analogy for their leaving RCA: "It was like when you break up with somebody. You know it's for the right reasons, but it still feels weird not having them around." The record industry has changed drastically in Lit's lifetime, with layoffs and consolidations around every corner. And, as Jeremy notes, "there was literally nobody left at RCA from the day we signed; people weren't motivated to work; they were operating out of fear. We decided we'd rather we do it ourselves. We parted ways as gentlemen, totally amicably."

And, clearly, doing it themselves has worked out beautifully, with Lit as proof positive. There's the usual welcome diversity, born from the quartet's range of musical tastes and experience. "Our influences, and who we are, is all over the place, explains A.Jay, "and we've always left the door open for heavy songs, pop stuff, dark songs, string sections, whatever. We've never said, 'no, that's not Lit,' because if we're into it, we'll do it," they say. That explains "Pictures of You," Lit's stellar cover of the Cure song. "I've always been a huge fan of the song," admits Jeremy, "and we learned the song 10 years ago to play it at an acoustic show, but we never did. It was always a song we had wanted to do." Fortunately, their cover choice made it to Lit, the band turning in a lilting, faithful, yet Lit-like version of the Cure hit.

Other cool Lit nuggets: David Campbell (aka Beck's father) did the strings on the song "Times Like This," while co-songwriters include Dennis Hill from the band Lefty, and Marty Fredericksen of Aerosmith fame, while the young guitarist from the Matches, Jon Devoto (who cites Lit as the first concert he ever saw, and who Lit took out on tour!), plays the solo in "Needle & Thread," a song bassist Kevin originally brought to the table. "Kevin has grown a lot as a song writer and he played a bigger role this time around, which was cool for us," says Jeremy, who adds about the collaborative process "It's like if you're a chef and you get a chance to cook next to Wolfgang Puck, you're gonna go, 'fuck yeah!' We tend to co-write with our friends, like Danny from Handsome Devil, or Butch Walker. When you get friends in the same room and everyone digs each other's style of writing, throw in some drinks, and it's an inevitable thing."

Another collaboration comes in the form of Lit's first-ever DVD, due in Fall 2004, and featuring two-and-a half hours of cool "shenanigans." Plus, it features live gig footage and videos, all compiled by a close friend of the band's from an astonishing 700 hours of videotape. It chronicles the band's history from the mid-'90s right up to the completion of Lit.

Like the band's past efforts, Lit is clearly loaded with potential singles, but they never know what will "hit," and still marvel that "My Own Worst Enemy" is still played over 500 times a week on radio. "It's unbelievable to us. When you write a batch of songs, they feel like a body of work; you never imagine one will take on a life of its own like that," A.Jay confesses. "It could have happened to anybody, but you still have to be proud that you're part of rock history in a way." Jeremy adds, "It's awesome to have written a classic riff. It's always a rush to play those first two notes live, because the crowd always goes nuts!"

As the band reflects on Lit and what went into the making of the album, it's clear they dug deep without coming too close to the bottom. "This business can chew you up and spit you out, and it's all a matter of how you come out on the other side," muses Jeremy. "Sometimes you come out on the other side stronger, and ready to kick ass. In a way, any hardships of the last few years brought the band closer together, because although we never questioned the future of the band, it gave us a chance to rethink the process." And though Lit ends with the sorrowfully inspired "Bulletproof," the song and CD itself ends with rousing hope (and a nod to Cheap Trick), as the band intones "here we are / we're all alright."

And in Lit's case, they're better than alright.

No upcoming events with Lit