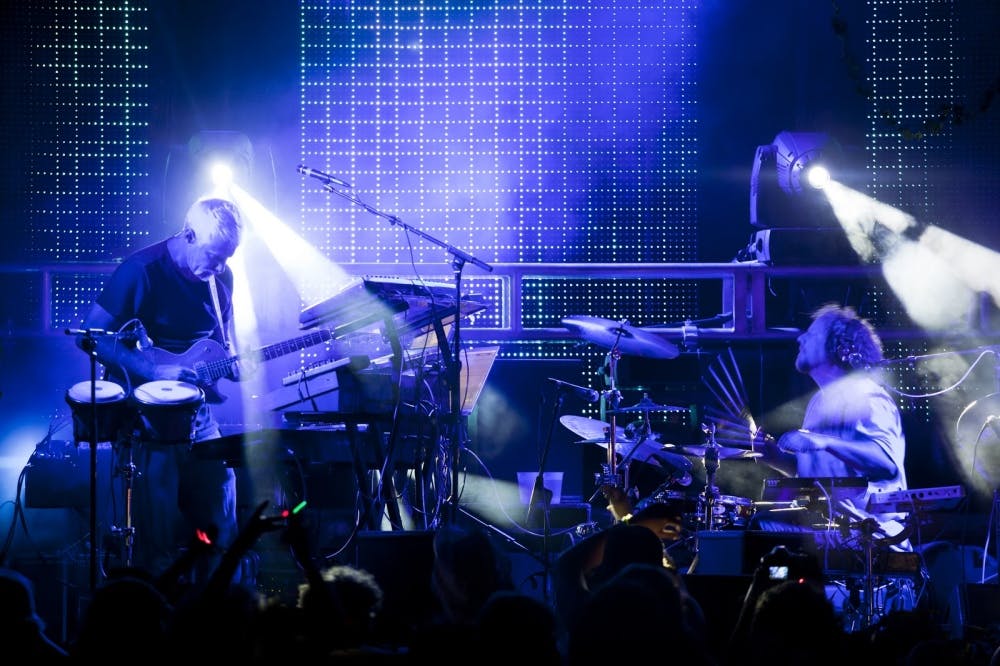 Follow Eoto to get alerts about upcoming events and special deals!

As electronic influences continue to penetrate the live rock, jazz, and jam ethos, one band consistently rises to the top, bringing together fans from across the musical spectrum.EOTO crisscrosses the country blowing out basement dives, packed theaters, and stages under the stars.Check your festival schedules: this 100% improvised dubstep/breakbeat/house/drum ; bass/trip-hop duo is the premier late-night party in the country. Throbbing bass and thudding beats are the signatures of this project from drummers Michael Travis and Jason Hann.

Without further ado, here are Eoto top 10 tracks of all time:

As electronic influences continue to penetrate the live rock, jazz, and jam ethos, one band consistently rises to the top, bringing together fans from across the musical spectrum.EOTO crisscrosses the country blowing out basement dives, packed theaters, and stages under the stars.Check your festival schedules: this 100% improvised dubstep/breakbeat/house/drum ; bass/trip-hop duo is the premier late-night party in the country.

Throbbing bass and thudding beats are the signatures of this project from drummers Michael Travis and Jason Hann. Born out of their shared love of electronic dance music, EOTO’s M.O. is to take the free-wheeling party vibe of a DJ set to the next level by using organic instruments, innovative performance technology, and uncharted musical exploration.Live drums, guitars, and keys, and vocals are mixed, remixed, and sampled on the fly using cutting-edge programs. This is all done without a script, and without a net.

Hann plays a hyper EQ’d drumkit, chock full of multi-touch screens and MIDI controllers, and throws a number of effects on his otherworldly vocal styles. Travis takes on subsonic frequencies, generating the band’s crushing low end with analog, digital, and software synthesizers, occasionally picking up guitar or a bass guitar and showing off his proficiency with instruments of all shapes and sizes.

Hann, has been playing percussion professionally since the age of 12. Years of collaborating, touring, and recording with the likes of Youssou N’Dour, Isaac Hayes, Dr. Dre, Loreena McKinnett, SCI, and a slew of other established artists running the gamut from Latin jazz to R ‘n’ B and soul allows him to move fluidly between styles. Adding to this is his depth in African and Latin drumming traditions, allowing the futuristic EOTO sound to keep itself rooted in the past.

For the last 16 years, Travis has been the drumming octopus in SCI. He morphs roles to melodic multi-instrumentalist in EOTO, providing the raw basslines and harmonic tapestry that fill out the soundscape of the duo. Both Hann and Travis have the chops and stamina for physically demanding, EOTO improvised sets, which have been known to go upwards of 4 straight hours. “When we’re playing live for 3 hours a night, it’s like playing tribal drums in a ceremony,” Hann explains. “I’m looking at one person at a time out there, and thinking ‘what can I do to make you dance?’”

An EOTO set is a nebulous beast.;Setlists are only broken up into tracks for the sake of posterity.In reality, changes in mood, energy, and inspiration are reflected—in real-time—by rhythmic and melodic shifts.The duo moves effortlessly from choppy dubstep to whip-smart, four-on-the-floor house to psychedelic trip-hop.It’s a dance marathon, but everyone’s in it together. The EOTO set is dependent on crowd energy and activity, effectively breaking down the wall between artist and audience.

Because EOTO starts fresh every night, the band’s evolutionary progress has been thrust into hyperspeed, eclipsing standard acts who return to their dusty catalog for every performance.;This is apparent when following the musical evolution of their live performances, which are recorded every night and made available to their fans. On EOTO’s first 2 studio releases–2006’s Elephants Only Talk Occasionally, and the 2008 release Razed, EOTO bounced playfully between house, trance, and breakbeat.A huge change in their sound came when Travis and Hann first saw, felt, and heard the cathartic vibes that dubstep could produce at DJ Skream’s set at Shambhala during the Summer of 2008. This influence saw the duo become the first National, live, dubstep act in the US. The wobbly, buzz-saw bass and heavy backbeat style has become a signature of their sets, as heard on their live recordings and on the 2009 studio release, Fire the Lazers!!! Newer material has the duo co-opting sounds from outside the realm of electronic music with scratchy punk riffs and fuzzy sludge metal bass.

While the recording of each album is no different than the live performance—completely improvised in one take—the records are an appetizer to the live performance. Hann and Travis are consummate road dogs, playing almost 200 shows a year.EOTO has played more than seven hundred unique showcases in 48 different states in the five years since the project’s inception.Each set is recorded and released (www.livedownloads.com ) so fans can capture their unique EOTO dance throwdown, reliving the experience again and again.

No upcoming events with Eoto