Best Derrick May Songs of All Time – Top 10 Tracks 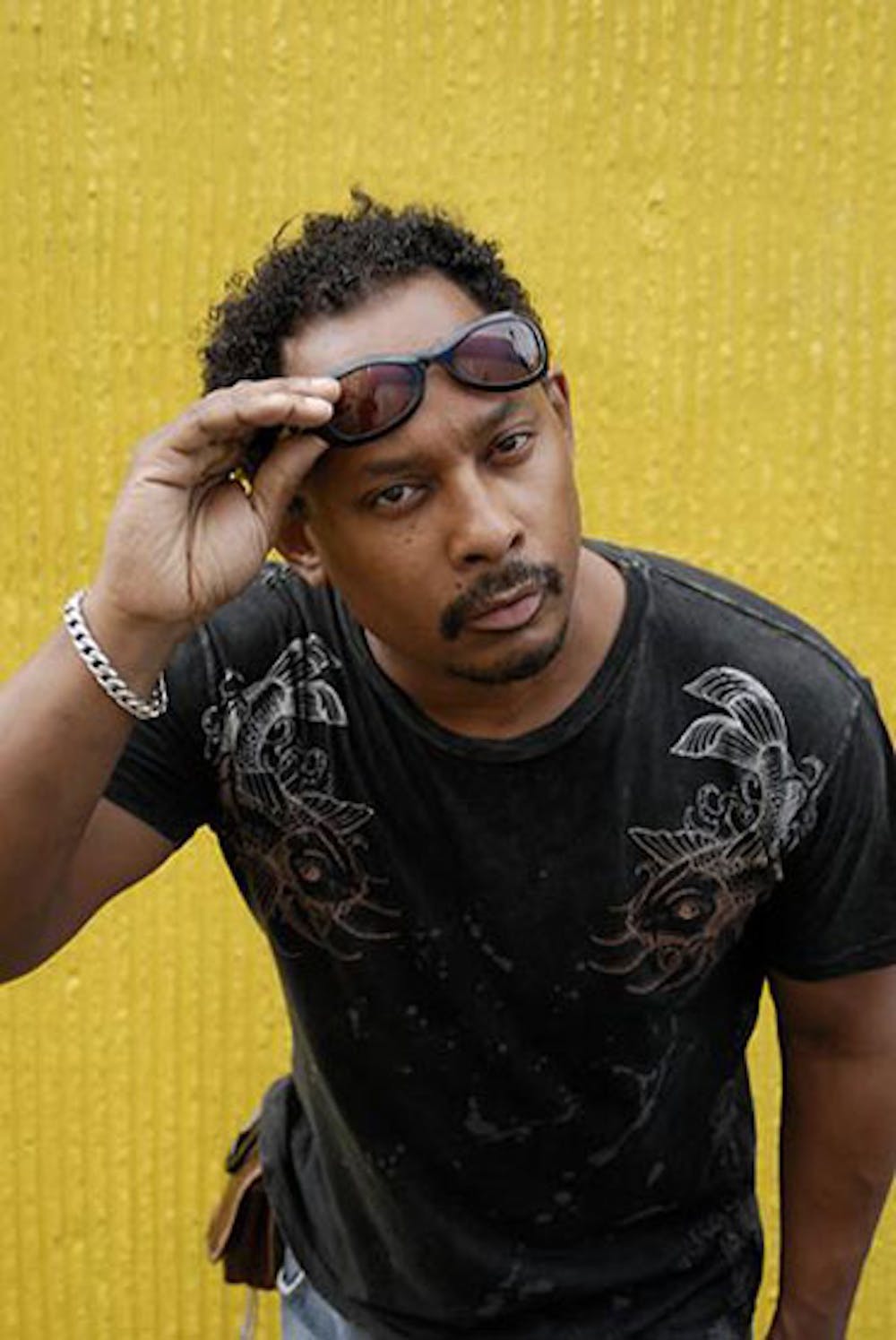 Follow Derrick May to get alerts about upcoming events and special deals!

If one name crops up again and again in discussions of techno, it is that of Derrick "Mayday" May.

Without further ado, here are Derrick May top 10 tracks of all time:

If one name crops up again and again in discussions of techno, it is that of Derrick "Mayday" May. Alongside Atkins, Juan, Craig, Carl and Saunderson, Kevin, May is regarded as one of the kings of the Detroit sound. Inspired by Yello and Kraftwerk, he began to make electronic music with Atkins and Saunderson while studying with them at Belleville High, Detroit. Recording either as Mayday or Rhythim Is Rhythim (occasionally in conjunction with Carl Craig) and generally on his own Transmat Records label, he went on to carve out a new vein in dance music that synthesized the advances of the electro movement with the more challenging end of the House movement - a music that defined "techno". Early cuts such as "Nude Photo" and "The Dance", both on Transmat, were inspirational to many. However, it was the release of "Strings Of Life" in 1987, which, with its wide appeal to the house music fans of the late 80s, simultaneously brought May his deserved acclaim and Detroit techno to European club-goers.

May went on to cut three tracks on System 7's debut album, before Network released Innovator: Soundtrack For The Tenth Planet in 1991, a six-track EP that comprised some of May's definitive moments to date. In the same year, May was responsible for what Carl Craig has called the finest remix ever, Sueño Latino's "Sueño Latino", itself a reworking of Manuel Goettsching's epic "E2-M4". It was followed in 1992 by Relics, a double album of Transmat's finest moments, heavily featuring Rhythim Is Rhythim, which coincided with a re-release of "Strings Of Life" on the Belgium label Buzz, this time in a drumless version reminiscent of May's "Sueño Latino" remix. More recently, Transmat has been revived following its signing to Sony. This has resulted in the long-awaited release of Rhythim Is Rhythim's 1991 recordings, "Kao-tic Harmony" and "Icon", and the Japanese (and subsequent American) release of a comprehensive Derrick May retrospective, Innovator, which contains all May's work for the Transmat label including remixes and tracks released for the first time.

Detroit Techno landlord and head of the internationally respected Transmat Records, Derrick May continues to move dancefloors with his no-nonsense Techno grooves. One third of the Belleville Three, this electronic legend arranges classic Detroit tracks in a timeless fashion: frantically beat-heavy yet soulfully warm. Nervous beats and breaks pound away at curvy synths and digital melodies that stand in the background of these vibesome grooves like an electric scalloped fence surrounding a celebrity's home. Confident rhythms charge at your chest through an invisible spiderweb of string samples holding your consciousness captive on the dancefloor.

Derrick May is one of the founding fathers of Detroit techno, a precursor of its many variants and particularly of acid house. His eastethic, skeletal, melancholy style gained him the nickname of "the Miles Davis of techno". He introduced both a psychological element and a futuristic vision in dance music.

Along with his high school mates Juan Atkins and Kevin Saunderson, May began early in life to explore electronic music May sponsored the single Let's Go by X-Ray, that introduced the hypnotic, repetitive electronic figures of techno, and then recorded Nude Photo (Transmat, 1987), credited to Rhythim Is Rhythim, one of the records that started the techno revolution world-wide.

Inspired by the legendary Detroit disco DJ, Ken Collier, May, along with High School friend Juan Atkins, formed Deep Space, a DJ and party outfit in the early eighties. Playing what they termed as 'conceptual disco' to the high school party scene that was very much alive in Detroit at the time, the duo set themselves apart from the other DJ and party collectives at the time. Atkins had already been very influential in shaping the emerging techno sound with his recordings as Cybotron, but May's time was soon to come.

Whilst DJing with Atkins, May spent time visiting his mother in Chicago, where he was exposed to the emerging house music scene that was being championed by the likes of Frankie Knuckles and Farley Jackmaster Funk. His experiences in Chicago opened his eyes wider to the growing possibilities of electronic music and the euphoria and spiritualty it was capable of creating.

In 1996 May set up his now legendary Transmat label, taking the name from the early Atkins track 'Time Space Transmat' on his Metroplex label. May cut his production teeth with the label's first release 'Let's Go', developin his craft from the guiding hand of Atkins. His next release, under the guise of Rhytim is Rhythim entitled 'Nude Photo', with it's bending synths, melodic staccato bass and deep bass drums would come to define the emerging techno sound.May then continued to develop his sound for Transmat. Utilising the familiar bass sounds with ever more complex beats, flange effects, twisting chords and deep strings, May produced a catalogue of music that pushed the boundaries of what could be accomplished with electronic sound ever further apart. To many, the techno of Detroit is very much ingrained within the character and history of the City itself. A City that was isolated from the rest of America, with a downtown area in financial and architectural ruin, a deteriating motor industry and the reputation of it being the 'murder capital' of America, Detroit, on the outset, seemed a desolate and empty place. In reality there was a spirit and soul there that lived on in the City's urban communities from its glory days and its great musical heritage. This mixture of coldness and warmth, desolation and soul, was perfectly represented by May's Techno experiments. The classic tracks that include 'Beyond the Dance', 'The Beginning', 'Icon' and his most famous release 'Strings of Life' all emphasise Techno's most crucial componant, that this is the music of machines, cold and soulless machines, but May injected and extracted so much hope, spirituality and soul from them that the result was truly inspirational.

Inspiration is certainly one thing that all techno artists that came out in the wake of May's recordings owe to him. An ambassador for Detroit and techno, May spent much time in the UK and Europe promoting the music at a time when America was not ready to wake up. At a time where the 'Summer of Love' was at its peak, May's recordings, especially the seminal 'Strings of life' helped heighten and give further fuel to the movement.

As well as his original production work, May's 'Mayday' remix projects are also legendary. His re-workings turn average tracks into unique masterpieces, nowhere more evident than on his classic remix of pop band Dee-Lite's 'Wild Times'. This tune would also become a favorite of UK DJs at huge raves across the country, with its mixture of pounding hard basslines and tear rendering piano melodies, all combined with May's trademark intricate and effect laden techno beats.

May spends most of his time touring the world as a DJ, continuing in the tradition of the likes of Ken Collier and Larry Levan, a tradition he started with his Deep Space parties all those years ago. He also still runs his Transmat label from Detroit, which has been given a new lease of life in recent years with the introduction of many artists that have helped kick start Detroit's 'third wave' of dominence over techno. Artists like Aril Brikha, Microworld and Indio have taken the label in a new direction, maybe less raw and brutal as May's early work, but still full of the same emotionally unrestrained sexy electronic funk that Derrick May helped give birth to.

No upcoming events with Derrick May