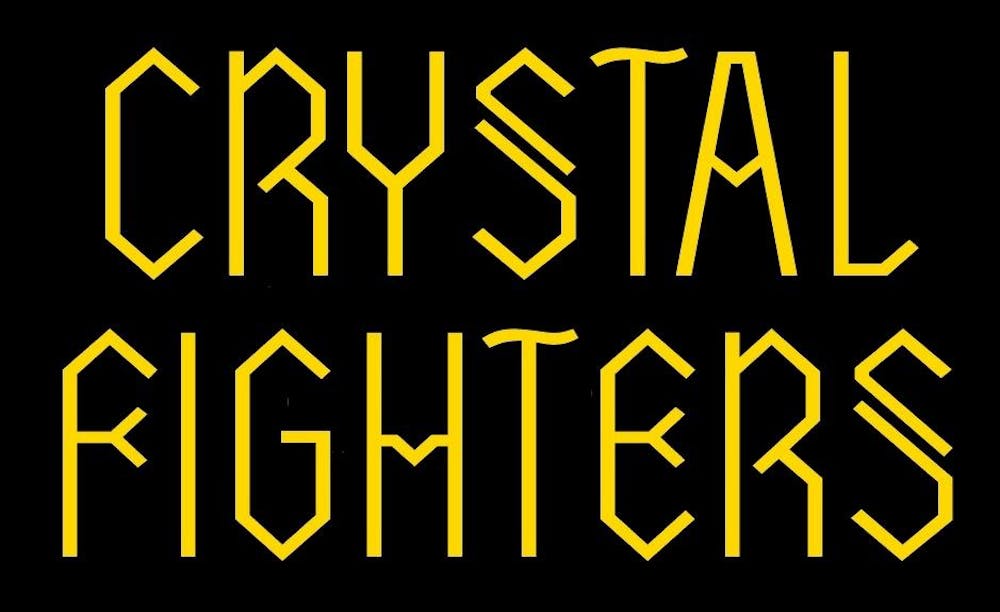 Follow Crystal Fighters to get alerts about upcoming events and special deals!

Every band believes that what they’re doing is unique, but few if any have as much right to make that claim as Crystal Fighters.

Without further ado, here are Crystal Fighters top 10 tracks of all time:

Every band believes that what they’re doing is unique, but few if any have as much right to make that claim as Crystal Fighters. That is, unless you know of many other groups out there fusing traditional folk music from the Basque region with contemporary dance styles, using state-of-the-art technology alongside traditional instruments from that part of northern Spain such as txalapartas and txistus, and whose debut album is based on an unfinished opera about the nature of existence and meaning of love written by a member’s grandfather in the final throes of a mental breakdown.

It is to Crystal Fighters’ eternal credit that from such esoteric raw material they have managed to fashion a supremely accessible dance album, full of irresistible rhythms, anthemic melodies and chant-worthy choruses. Star Of Love – which was assembled over a year from a number of musical ideas, beats, chords and lyrics, many of which were developed as part of their experimental and explosive live show - features 11 of the most gloriously tuneful, exotic and euphoric songs released in 2010. The fact that it can be enjoyed as a bunch of club bangers as well as a series of explorations of the themes of love and hate, insanity and death, confusion and hope, can only enhance its appeal.

Crystal Fighters have already proved their appeal. Two BBC Radio 1 Record of the Weeks with ‘Xtatic Truth’ and ‘In The Summer’; Later with Jools Holland performances; great album reviews from Q, Mojo, Mixmag; touring with Foals, all served to confirm CF’s status as hot property.

So who are the mysterious characters behind Crystal Fighters? Step out of the shadows Sebastian, Gilbert and Graham, and Mimi and Laure on vocals. Not fans of the cult of personality, not much is known about them as individuals, where they are from or what their backgrounds are – they are happy to retain some mystique, especially in this over-lit age in which it is hard to keep secrets. Suffice to say they have individually explored the gamut of music subgenres and their attendant scenes from techno to punk to dub and drum’n’bass, and are bringing those numerous experiences and influences to bear on Crystal Fighters.

They describe what they do, in the simplest terms, as “fast dance music with Basque instruments, synthesisers and voices”. Their diversity makes itself apparent on their records, but perhaps even more so in concert, where Sebastian in the middle of the stage with his acoustic guitar and tambourine is flanked on one side by Graham on electric guitar and, on the other, by Gilbert with his table of electronics, computers and keyboards.

The key instruments in this furious live melee are the txalapartas that are positioned between Graham and Gilbert, which they play in unison. They are a huge part of the live show, the sound of wood on wood in a rapturous four-handed rhythm ringing out over the harmonious mayhem with such primal authority. “People like our live energy,” says Gilbert, who draws the distinction between the spectacle and energy-rush of Crystal Fighters live and the “intricacies and melodies” of the recorded variety.

Crystal Fighters’ live shows are legendarily intense affairs, carousing and chaotic but full of captivating beauty. No wonder they have become staples of the live circuit and the festival scene, with headlining appearances across Europe, America and Japan. “Live, we’re more punk and chaotic, on record less so,” concludes Graham. It is in concert that the collision between past and future – between Basque exotica and mystery and techno dance adventurism – is most apparent.

And it is on record that their mind-expanding properties become evident: the psychedelic artwork for the album and general sense of visionary exploration contained within the lyrics and music point towards a cosmic element to Crystal Fighters. The latter was the name of the half-finished manuscript for an opera left behind by Bakar, the grandfather of their friend and occasional band chanteuse Laure, as he struggled to get to grips with the mental torment which he endured in the latter stages of his life. She came across it while clearing out the reclusive old man’s remote home in the Basque countryside, and quickly became obsessed with the cryptic writings within. Entranced by the seemingly prophetic contents, the band assumed the name and expanded upon the wild and deranged spirit of his formative work.

Each of the songs on Star Of Love – an acronym for SOL, Spanish for “sun” – is based to a greater or lesser extent on that opera and the imagery of anguish and gloom, the language of memory and desire, with which it was suffused. Crystal Fighters have lent it their own aura: there is a sort of supernatural lustre, or eerie brightness, to the songs they have created from the self-titled manuscript. This is hardly surprising when you consider the subject matter of the original material. Champion Sound captures the uncertainty and imagines the notion of finding an all-consuming love. Solar System imagines the soul as a solar system and is based on a sketch of same by Bakar that comprised the faces of his former lovers drawn on the planets, with himself the despairing centre as the sun. In The Summer captures the ecstatic intensity of a city bathed in sunshine.

The music is equally rapturous-with-an-edge, a jubilant collision of old world musicianship and future electronics, folk and computer-funk, shimmering synths, punkishly energetic percussion and surging unison vocals. This is where the “anti-todo” (literally “anti-everything”) youth movement of 1980s Spain meets the ecstatic rush of modern electronic dance. It’s raved-up, percussive folktronica underpinned by a progressive contemporary London bass sound. At all times, there is a feeling of overload, of songs fit to burst – with sonic invention and a joy that threatens to engulf. If there are links between what Crystal Fighters do, the late-60s acid rock movement and late-80s/early-90s acid house, that’s because they share a yearning for transcendence and the ecstatic shared experience.

“Our songs concern bigger themes than ‘my girlfriend dumped me’,” says Gilbert, who is fascinated by the evolution of music scenes and a ‘genre-less future.’ “They’re less about ‘I love you’ than the meaning of the concept itself.” They realise that there will be some who use Crystal Fighters music as part of a nocturnal pursuit of bliss-out, but they insist this is more than a mere party, or after-party, soundtrack. It’s music that celebrates Basque people and the myths and mysteries of their culture. It explores, through music, words and visuals (there are costume changes and emblems/images displayed during Crystal Fighters gigs), the heritage of the region and searches for the meaning and the melancholy beneath these songs for, and about, dancing.

And finally, it aims to bring some northern Spanish strangeness to our country – I Love London concerns a Basque girl called Mimi who finds herself in the capital, relishing the almost surreal feeling of dislocation. This image of a Basque girl adrift in London defines much of what Crystal Fighters are about, as the woman from that isolated land with its ancient mythologies brings her idiosyncratic identity to bear on our own agnostic, modernistic culture. And if that sounds heavy, the music couldn’t be lighter, a sheer rhythmic rush as Mimi takes a journey to the suburbs and shrieks with delight at all the stations speeding by: Willesden! Harlesden! Watford Junction!

It’s pure pleasure, like everything Crystal Fighters do. And it comes from somewhere high above the old hills of their home, a love that comes to conquer.

No upcoming events with Crystal Fighters