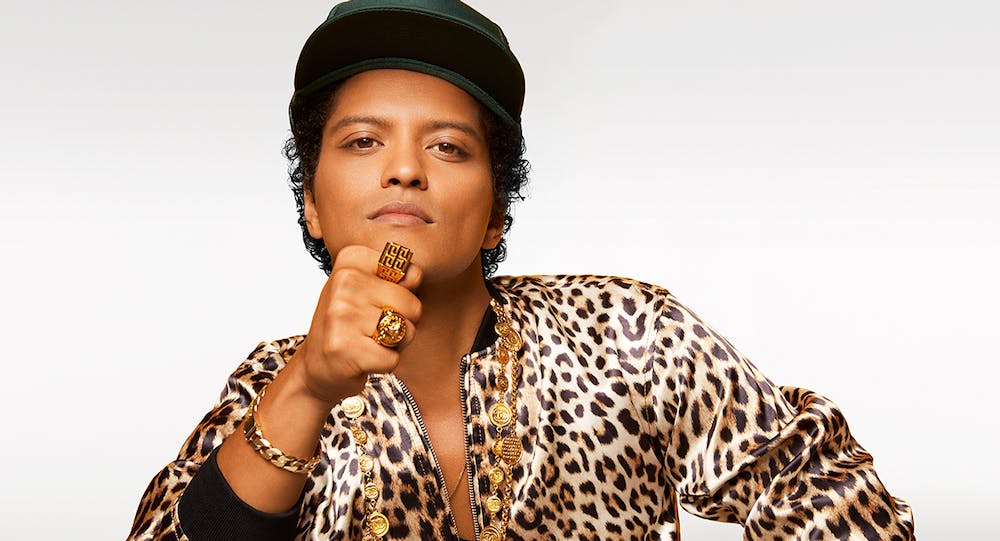 Follow Bruno Mars to get alerts about upcoming events and special deals!

It's better if you don't understand; just listen and have a good time.

Without further ado, here are Bruno Mars top 10 tracks of all time:

2. Talking to the Moon

4. Locked out of Heaven

It's better if you don't understand; just listen and have a good time. That's the response Bruno Mars will give you with a smile when asked to describe his sound and music. He would much rather sing, perform, and write his songs than talk about them, but that is becoming more and more unavoidable these days. It might seem that Mars appeared out of nowhere, co-writing, producing and performing on B.o.B's #1 "Nothin' On You" followed by Travie McCoy's chart-climbing "Billionaire", but he makes one thing clear: "It's not an overnight success".

Mars is a multitalented singer, songwriter, producer and musician who feels most at home when he's performing. Born to a musical family in Honolulu, Hawaii, he was practically raised on the stage. His father, a Latin percussionist from Brooklyn, organized a Vegas-style revue that featured the entire family, including his mother, a talented vocalist. When a four-year-old Mars observed his family performing Motown hits, doo-wop medleys and impersonations for enthusiastic crowds all over his native Waikiki Beach, "I was jealous!" says Mars with a laugh. "My dad put me on stage and I remember singing an Elvis song and that was it. Ever since that moment, I've been addicted."

Rich in diverse music from all over the globe, Honolulu was an exciting hometown for the budding singer/songwriter. On one end of the spectrum, his home was filled with the 1950s classics that were his father's passion. Meanwhile, the city is rich in traditional sounds, including reggae, rock and folk music, as well as the latest pop hits. "Hawaii is basically in the middle of the world, so you're exposed to every type of music over there," explains Mars.

As soon as he graduated high school, Mars left Hawaii for Los Angeles with dreams of launching his career as a performer. Those dreams got put on hold, however, when The Smeezingtons, the songwriting/production team he founded with Philip Lawrence and Ari Levine, suddenly took off. The pair has crafted major hits for a diverse roster of talent, including Flo Rida's "Right Round", Travie McCoy's "Billionaire", Brandy's "Long Distance" and K'Naan's "Waving Flags", which is the theme song for the 2010 World Cup.

Mars describes his time behind the scenes as important to his development as an artist. "I realized that you have to go into this industry as an artist with a clear vision and understanding of who you are. Being so young when I was first signed, I never really had a sense of who I wanted to be. Now things are really working out because everything that I'm singing, writing and composing is really me."

On the heels of "Nothin' on You" and "Billionaire" and as a preview of what's to come from Bruno Mars, Elektra Records is releasing a 4-song EP aptly titled "It's Better If You Don't Understand". The title is taken from a lyric to "The Other Side"; one of the songs included that features Cee-Lo Green and re-teams Mars with B.o.B. The song depicts the musician's current routine. "It's basically a story of the lifestyle you end up living as an artist and how I would describe it to a girl I just met to try and explain, but in the end… It's better if you don't understand."

When asked to describe the music he's about to release Mars says "it's hard to put myself in a box. I just write songs that I strongly believe in and that are coming from inside. There's no tricks. It's honesty with big melodies. And I'm going to be singing the s— out of them." The collection of songs on the EP are written from various real-life experiences, where Mars blends his buoyant voice with purposefully simple production. All of the songs are produced and written with his Smeezingtons partner Philip Lawrence.

Although he's incredibly proud of the recordings, Mars feels the best way to experience the sound is to see him perform live with his band. "That is what I'm most excited for – taking these songs and traveling them around the world." The only place he would rather be than in the recording studio, is with his band on stage – where he grew up. "I think people are really going to gravitate towards the live show. We turn it into a party."