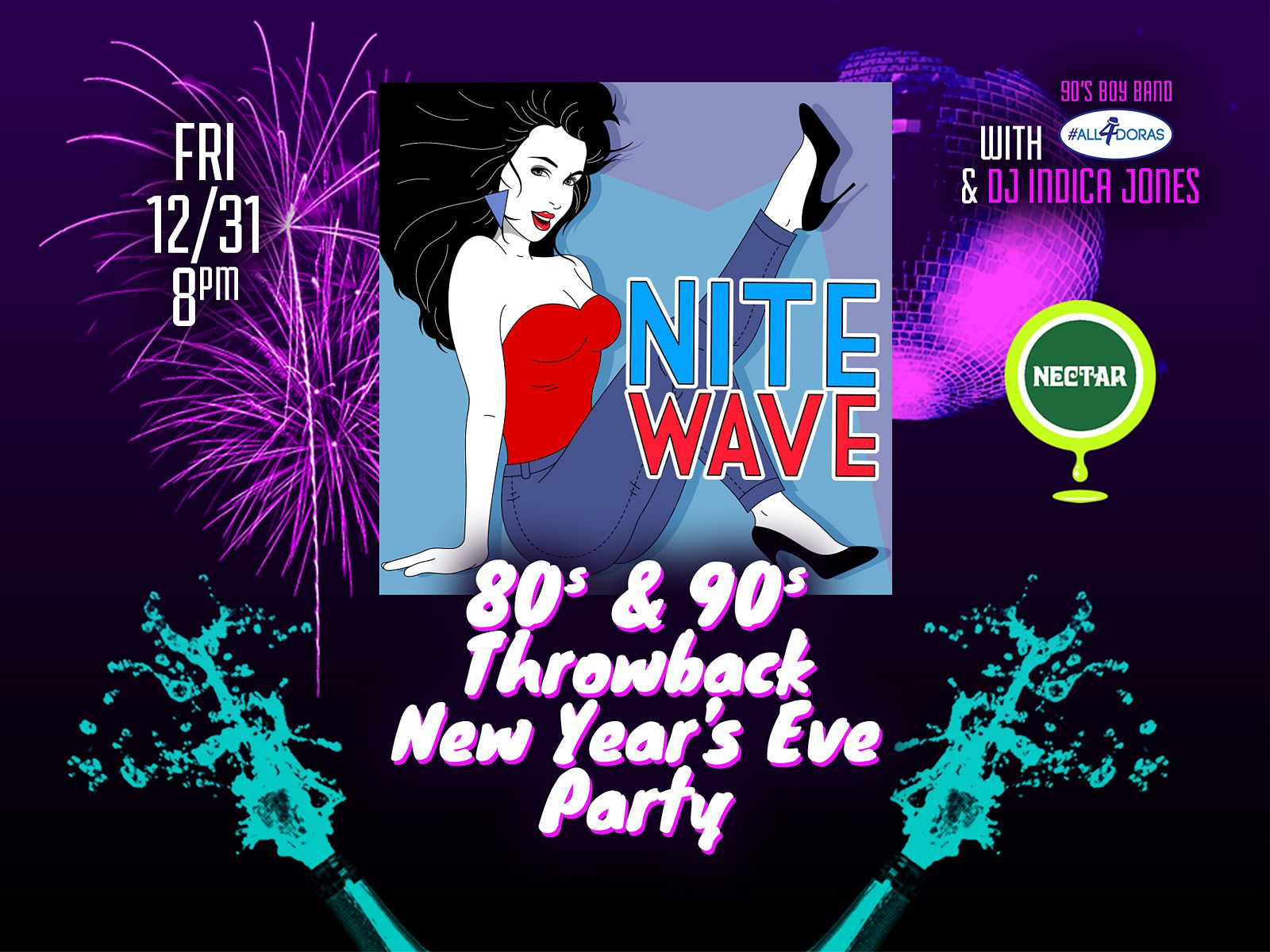 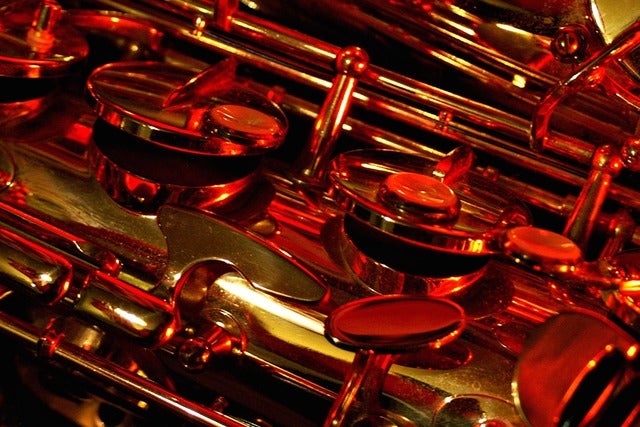 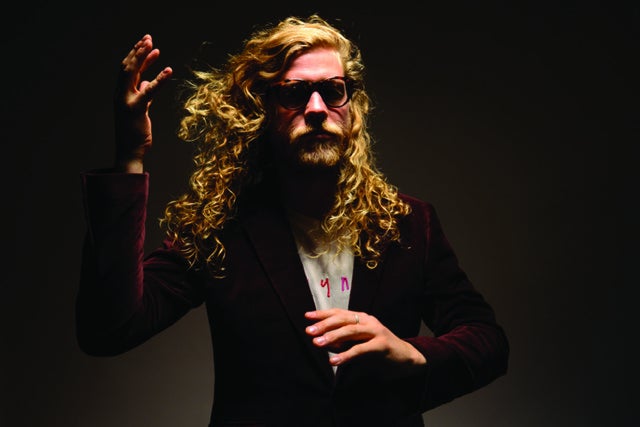 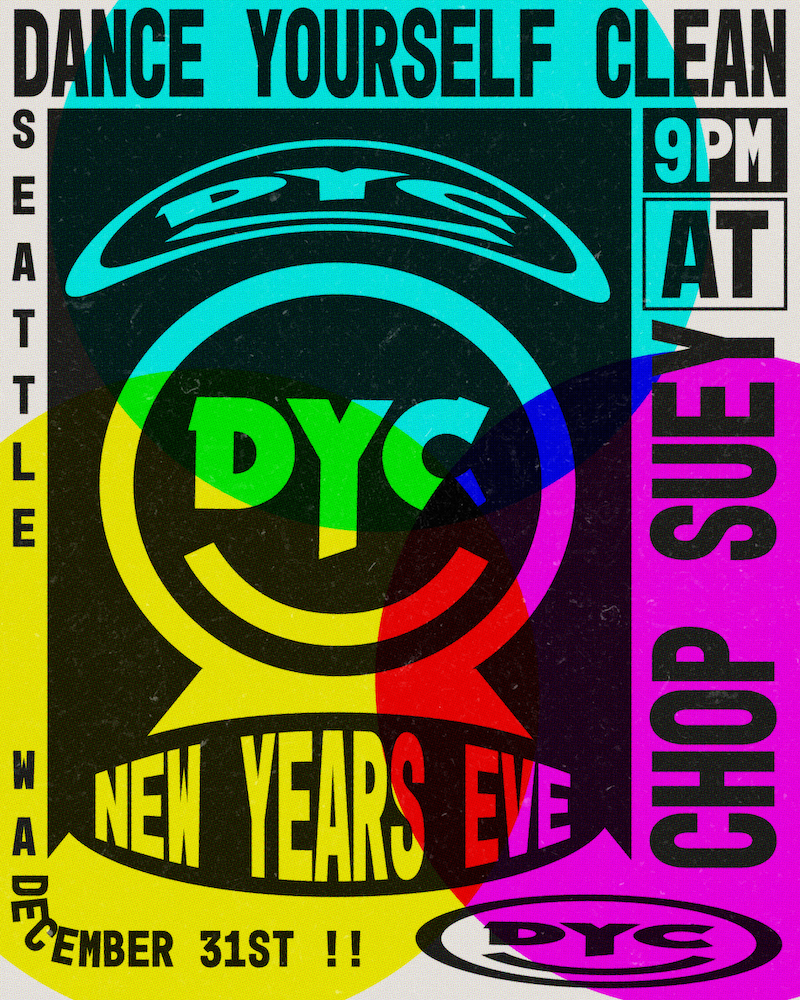 New Years Eve 2022 (Decades Party with ARTY)
Doors open at 9:00 PM
Ora presents New Years Eve Decades Party with ARTY ARTY Date: December 31, 2021 Time: 9pm-3am TICKETS ---- https://tickets.oraseattle.com/e/new-years-eve-2022-decades-party-with-arty-at-or-2/tickets local support: WEB B2B Randall Glenn Serjey Andre Kul Kzar B2B J-Note Downstairs: Timid & Sakebomb ORA~ One Of Seattle's top Venues Located In Bell Town. Bring In 2022, With Elegance & Sophistication, Countdown, Complimentary Champagne at midnight. 2 Dance floors, 7 Djs. ➖➖➖➖➖➖➖➖➖➖➖➖➖➖➖ Main Room: ARTY ➖➖➖➖➖➖➖➖➖➖➖➖➖➖➖ ✔️PreSale ✔️Buy Ticket Online @ https://tickets.oraseattle.com/e/new-years-eve-2022-decades-party-with-arty-at-or-2 Ora Seattle 2330 1st Ave Seattle, Wa 98121 ~ 12AM Champagne Toast, Balloon & Confetti ~ Dress to Impress ~ VIP Table & Entry Packages Available ~ Amazing View of the Puget Sound from VIP Lounge ~ Doors Open from 9PM - 2AM Early arrival STRONGLY suggested! This is NYE DECADES PARTY THEME DRESS THEME: COME DRESS FASHONABLY AS YOUR FAVROITE DECADE ---or come as yourself.. just come to have fun! ----------------------------------- Arty ----------------------------------- A Russian EDM DJ and producer, Arty is also the host of the popular Together We Are radio show and podcast. Arty's debut was in 2009 when the Enhanced Progressive label released his Vanilla Sky EP. In 2012 he was co-signed by a DJ superstar when he joined Paul Van Dyk for the single "The Ocean," while his Together We Are radio show and podcast debuted that same year. Two years later he joined Above & Beyond for the hit single "You Got to Believe" featuring Zoe Johnson. In 2015 he broadened his horizons by launching his own channel on the online video game network Twitch. He also solidified his EDM standings that year with the debut album Glorious. Tracks from the album debuted on his Together FM show, which aired on the SiriusXM satellite radio network and Fun Radio in France. Two tracks from the album, "Up All Night" and "Last Kiss," became successful singles, earning nearly 15 million and six million plays, respectively, on digital streaming services. Throughout 2016, Arty released singles via a variety of labels including the bass house-influenced "Bloodfire" and the electro house track, "Distorted Love." Reviving his long-dormant trance side project, Alpha 9, he released "This Night Is Ours" in early 2017. A tropical house track, "Falling Down," followed before Arty ventured into pop territory collaborating with K-pop singer Eric Nam on "Idea of You." "Supposed to Be," on Martin Garrix's STMPD RCRDS, followed in September of that year. In January 2018, Arty returned to the Alpha 9 project with "You and I." Also that year, he issued a handful of non-album singles including "Sunrise" featuring April Bender, "Rain," and "Tim." In 2019, he scored a top thirty dance single with "Save Me Tonight." He has collaborated with Armin van Buuren,[5] Above & Beyond, BT,[6] Paul van Dyk,[7] Mat Zo,[8] OneRepublic[9] and Matisse & Sadko. [10] His debut album, Glorious (2015), peaked at number 14 on the US Dance/Electronic Albums charts. ------------------------------------ Awards and recognition ------------------------------------ In 2010, Arty appeared in the Top 100 DJs selection of DJ Magazine,[61] where he featured at number 78. In 2011, Arty climbed 53 spots to position 25 on the list[62] but moved down three spots in 2012 to take 28th. [63] At the International Dance Music Awards 2011, he was nominated in the category Best Breakthrough DJ but the award went to Afrojack. [64] In 2012, Arty was nominated twice for the IDMA's in the category for Best Trance Track for his collaboration with Paul van Dyk on "The Ocean", and his collaboration with BT and Nadia Ali on the track "This Must Be the Love". [64] In 2013, he ranked 57th in DJ Mag's Top 100,[65] and in 2014, he also made the list at No. 99, despite having a quiet year. [66] Arty appeared on the Fall 2013 cover of Vonnubi Press magazine along with a 10-page spread. 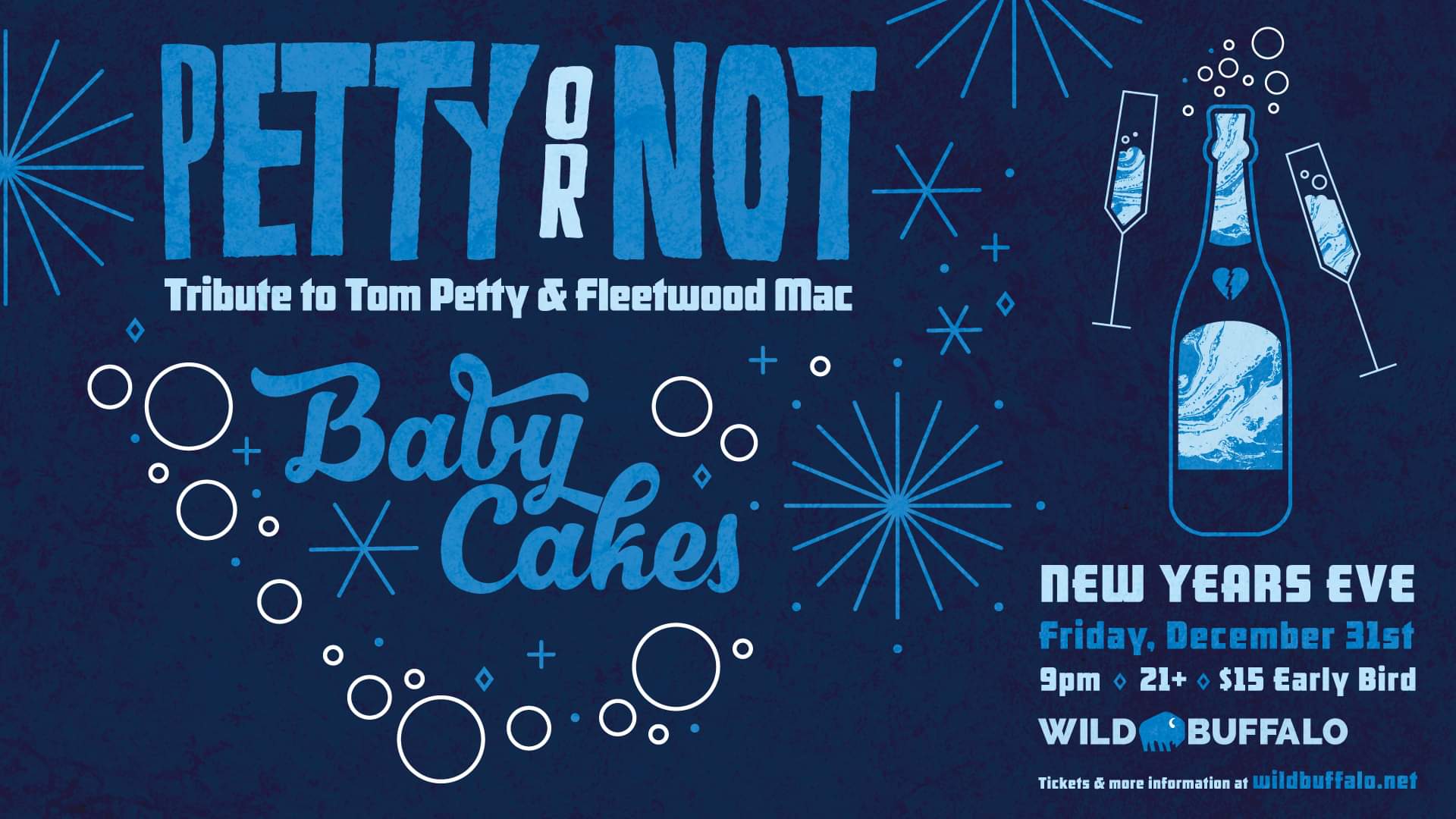 New Years Eve with Petty or Not and Baby Cakes
Doors open at 9:00 PM
Come celebrate this New Years Eve at the Wild Buffalo with two of Bellingham's favorite bands, Petty or Not (Tom Petty & Fleetwood Mac Tribute Band) and Baby Cakes (Funk/Soul)! New Years Eve Petty or Not, Baby Cakes Friday, December 31st 21+ | 8pm Doors | Limited $15 early bird tickets | $20 Wild Buffalo House of Music 208 W. Holly St. Ticket Link - https://wildbuffalo.net/#/calendar?event_id=49574 Petty or Not Bio: Petty or Not is a tribute band to Tom Petty that formed in the wake of the legend’s passing and consists of members of Baby Cakes, Polecat, Acorn Project, and more. All of the musicians had played together in some facet and decided to do a one-off show to commemorate Tom Petty’s life and music after he passed away. After the first show in December 2017 at the Wild Buffalo House of Music, the group decided that they just had to keep playing together because the music is just too important to all of them and to everyone in general. Since then the band has played at Downtown Sounds for over five thousand people, Summer Meltdown Festival, and are now available to perform at clubs, casinos, weddings, private events, or anywhere that wants to party to some good ol’ American Rock ‘N’ Roll. Petty or Not, Here We Come! Baby Cakes Bio: Hailing from the Bellingham area, Baby Cakes first formed on New Year’s Eve 2014. Since then they’ve wowed audiences with live performances throughout the Pacific Northwest at live music venues, festivals, weddings, and corporate events. A 10-piece powerhouse of highly experienced and talented musicians, Baby Cakes takes their audiences on a luxurious joyride through the golden age of American Soul, funk, and R&B. Featuring male and female lead vocals and full horn and rhythm sections, Baby Cakes brings to life the spirit, energy, and emotion of the most popular classic music in history. Playing everything from Wilson Pickett, Aretha Franklin, and Earth, Wind, and Fire to Beyonce and Bruno Mars, Baby Cakes is a multi-generational experience that will make you want to dance the night away. 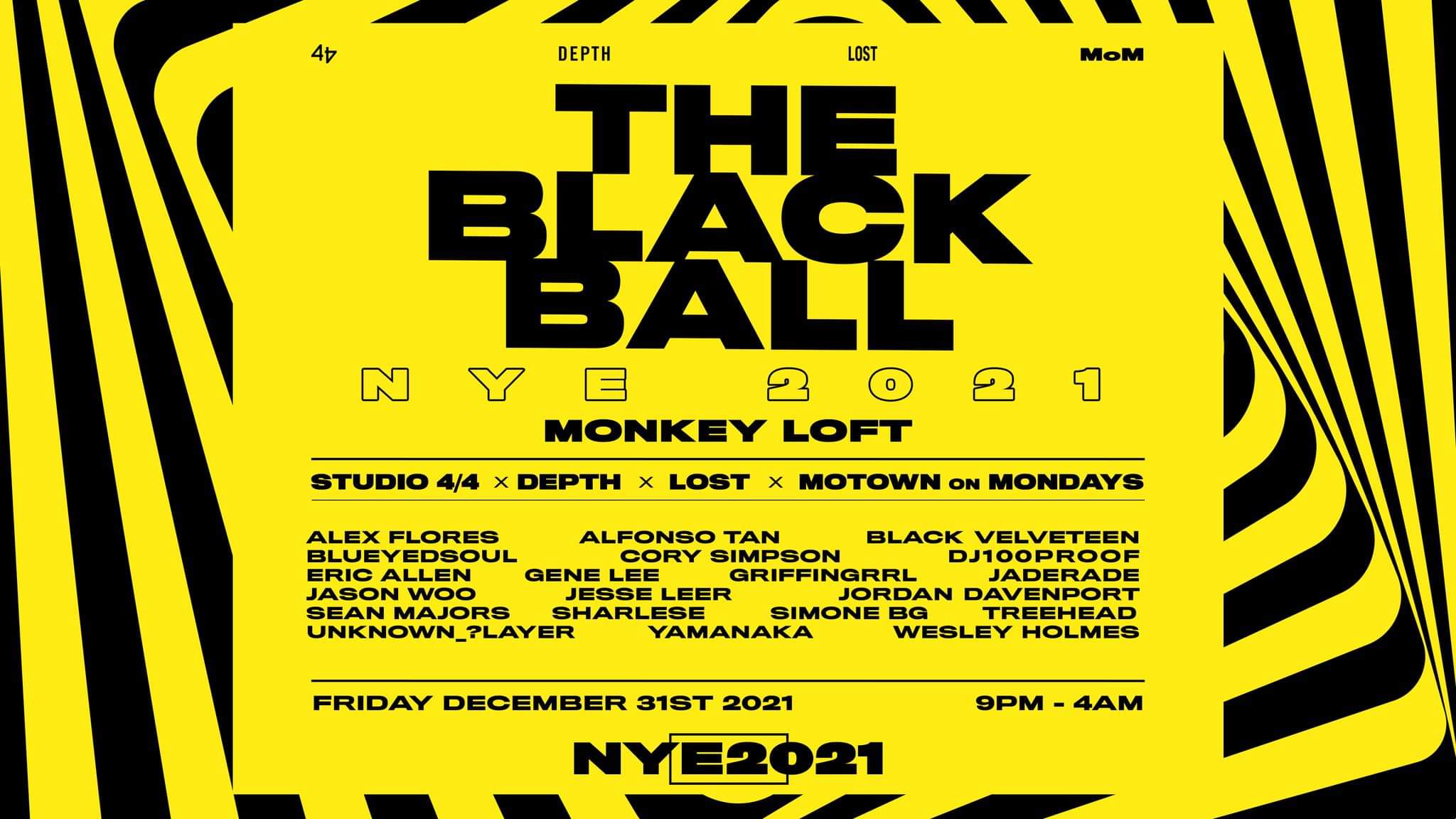 The Black Ball | NYE 2021
Doors open at 9:00 PM
THE BLACK BALL Four fabled crews are bringing their unique sounds and over twenty DJs to the entire space at Monkey Loft for an uncommonly bold project. From disco to house to funk to techno, you'll have some of the best selectors in the NW creating a traveling tapestry. Come prepared to explore the cavernous rooms; enjoying clean sound systems, massive projection art, and vibrant social spaces. Join like minded dance floors, reminding you that New Year's Eve doesn't have to be for rookies and hopefully giving us all the energy to start next year right. / LINEUP LOST (DECK) ALFONSO TAN | ERIC ALLEN | GENE LEE | GRIFFINGRRL | SEAN MAJORS | WESLEY HOLMES DEPTH (GALLERY) ALEX FLORES | CORY SIMPSON | SHARLESE | TREEHEAD | YAMANKA MOTOWN on MONDAYS (LOFT) BLUEYEDSOUL | DJ100PROOF STUDIO 4/4 (MAIN ROOM) BLACK VELVETEEN | JADERADE | JASON WOO | JESSE LEER | JORDAN DAVENPORT | SIMONE BG | UNKNOWN_?LAYER / STUDIO 4/4 Studio 4/4 started at Lo-fi over eight years ago, since then we've worked to bring the biggest names ever in-house and techno to the NW. Artists like Richie Hawtin, Maya Jane Coles, Maceo Plex, Danny Tenaglia, Tale of Us, Claude Von Stroke, Hot Since 82, The Black Madonna, Nicole Moudaber, Green Velvet, Duke Dumont, Gessaffelstein, The Martinez Brothers, and Alan Fitzpatrick are among the 250+ international headliners. / DEPTH We are the collective of artists and musicians pushing underground techno in Seattle, Washington. VACCINE REQUIREMENT 💉 Proof of vaccination is required 💉 Due to the recent rise of COVID cases in King County, effective Immediately, proof of COVID-19 vaccination is required for entry for all Studio 4/4 events in Seattle. We support all peoples decision to choose what is best for their body. Just as it may be your decision to be un-vaccinated, it is our decision to require vaccinations in order to gain entry to any of our events. Masks are required to be worn at all times while inside the building. Thank you for your understanding and continued support! 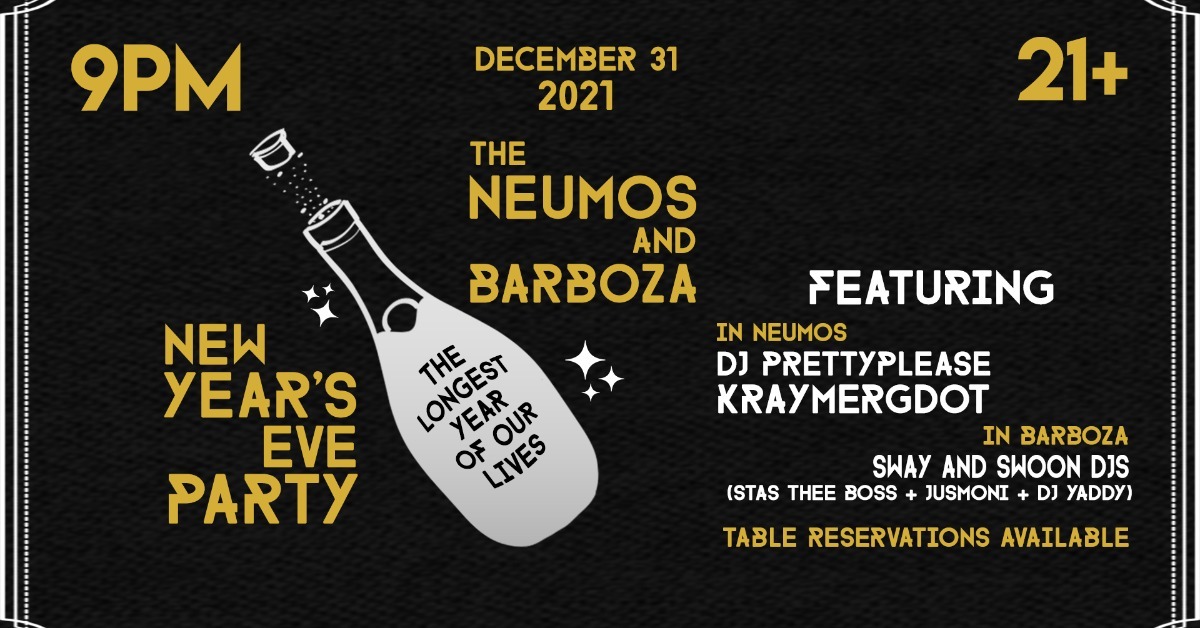 The Neumos and Barboza New Year’s Eve Party!
Doors open at 9:00 PM
COVID Safety Policy: In order to gain entry into Neumos, Barboza, and The Runaway, you must provide: *Proof of vaccination (vaccination card or photo of card) Or *A Negative test result within 48 hours of the event date. Our staff is fully vaccinated and we require that all staff members be masked while working. The health and safety of our staff and patrons is our top priority. Thank you for your cooperation and understanding. This ticket is a revocable license and may be taken up and admission refused upon refunding the purchase price appearing hereon and is grounds for seizure and cancellation without compensation. Holder of this ticket (“Holder”) voluntarily assumes all risks and danger incidental to the event for which this ticket is issued whether occurring prior to, during, or after same, including, but not limited to, contracting, and/or spreading the COVID-19 virus, and agrees that the organization, venue, presenter, agents, participants, or artists are not responsible or liable for any injuries, sickness, or death resulting from such causes. Holder acknowledges that the COVID-19 pandemic remains a threat to individual and public health, COVID-19 is a highly contagious disease transmitted through human contact and respiratory droplets (including through the air and via common surfaces) and it is possible that Holder may contract COVID-19 while at the event for which this ticket is issued. Holder agrees by use of this ticket not to transmit or aid in transmitting any description, account, picture, or reproduction of the event to which this ticket is issued. Breach of the foregoing will automatically terminate this license. Holder agrees that the license comprised by this ticket may be removed and Holder may be ejected from the event for which this ticket is issued in the event that Holder violates any law, ordinance, or venue regulation. Holder grants permission to the organization sponsoring the event for which this ticket is issued to utilize Holder’s image or likeness in connection with any video or other transmission or reproduction of the event to which this ticket relates. Important Information: * This event is 21 & over. Valid ID is required. Minors will not be permitted entry. * Doors open at the listed event time. * Event start time is generally one hour after doors open but is subject to change without notice. * All tickets are nonrefundable with the exception of event cancellation. * Support acts are subject to change.