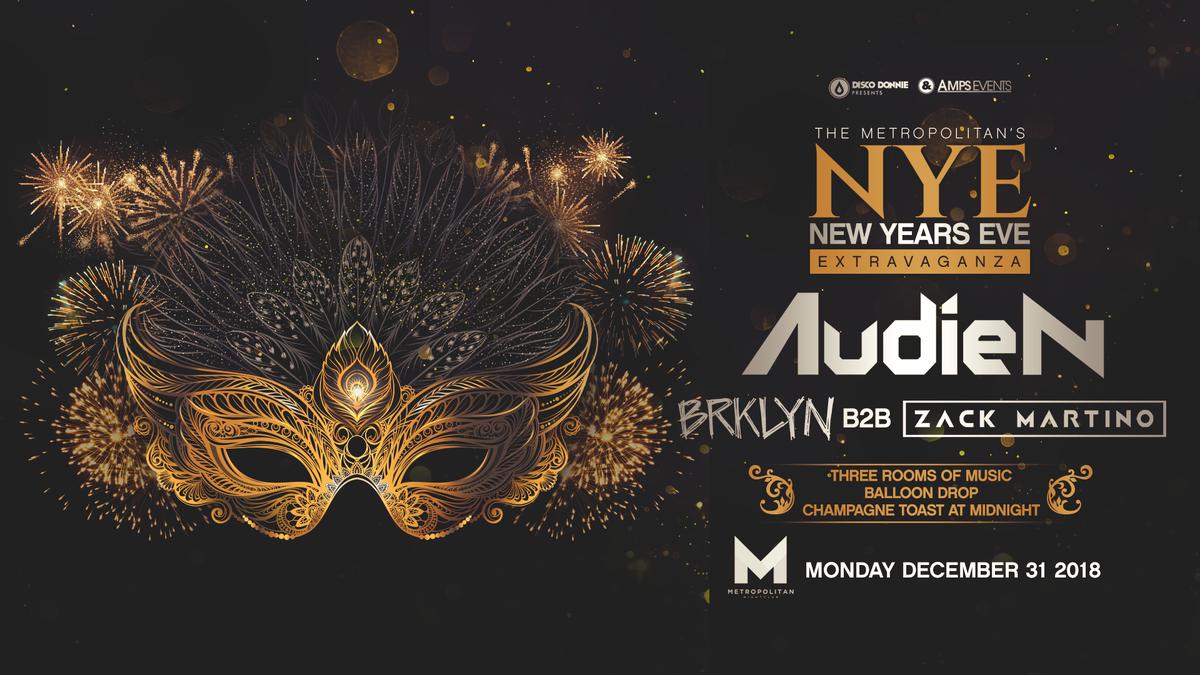 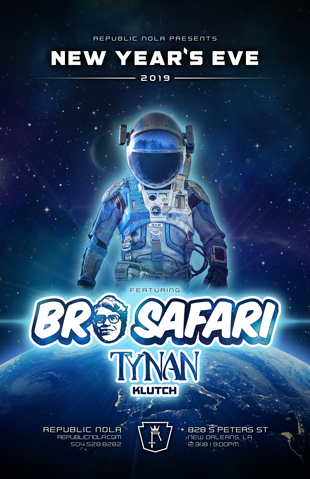 Bro Safari - NYE 2018/2019
Doors open at 10:00 PM
2018 has been a hell of a ride to say the least… We’ve gone through so much together: Elon Musk shot his car into space, some dude on the internet made half the world argue over if they heard Yanny or Laurel, people ate tide pods… Actually, let’s just move on and pretend 2018 never happened, and let’s bring in 2019 in the most MIND-BLOWING way possible! Republic is turning things up in a major way this New Year’s Eve with EDM LEGEND, Bro Safari, plus a little something for the basshead’s from TYNAN, and special opening and closing sets by Republic resident, Klutch! It doesn’t matter if you’re trying to pop bottles & party, rage on the rail, or get lost in the music… This New Year’s celebration is your go-to destination for the best experience New Orleans has to offer! Tickets are on sale starting as low as $18 when you BUY NOW –> https://goo.gl/dK6cZZ Bro Safari is known worldwide for searing hip-hop influenced trap and huge moombathon mixes, which have led to collaborations with M.I.A., Kill The Noise, Jack Ü, DJ Snake, RL Grime, Dillon Francis, Valentino Khan and Iggy Azalea. Producer Nicholas Weiller, known to millions as Bro Safari, continues to brand the industry with a searing impression of his hip-hop influenced trap and huge moombathon mixes, that have earned him his stripes alongside some of electronic music’s biggest and best. An avid punk rock fan that originally began producing drum n bass back in his hometown of Atlanta, he adopted the tongue-in-cheek demeanour of Bro Safari to launch his explosive foray into palpitation-inducing dubstep and bass-pummelling trap. Working with long-time collaborator UFO!, the pairing have remixed names including M.I.A. and Kill The Noise, receiving support from huge acts including Jack Ü, DJ Snake, RL Grime and more, their collaborative 10-track project ‘Animal’ also saw US hip-hop star Iggy Azalea add her talent to the instrumental original, with a flipped-out freestyle of bars that sent the blogsphere into a vortex. As collaborations with names such as Dillon Francis and Valentino Khan continued to showcase that he could hold his own and bring his undeniable flair to the table, his solo releases continue on in pushing the envelope of experimental electronic music. From his various releases on OWSLA, DimMak or on EP’s like ‘Bender’ and ‘Bros Gone Wild’ with their Southern-heavy influence of strung-out, cutting bass beats, his Notorious B.I.G. sampling tracks ‘Uncrushable’ and ‘Scumbag’ also showcase his wide-scoping breadth of knowledge and arsenal of weaponry. As prolific on the live circuit as he is in the studio, Bro Safari’s tour calendar has spanned the globe’s most notable music events, with appearances’ at Lollapalooza, ULTRA Music Festival, Electric Forest, TomorrowWorld, Mysteryland, Electric Zoo, EDC New York and many more, it’s no surprise that radio mixes for the likes of BBC Radio 1’s Diplo & Friends and Annie Nightingale have been in demand for the airwaves, taking his sound to a global audience of millions. From the textural intricacy of recent release ‘Follow’, to his “Pretty Good Tour” that will kick-off this fall with MC collaborator Armanni Reign, these shows past, present and future are readied to drive his status as one of the most promising, bubbling forces in US electronic music.