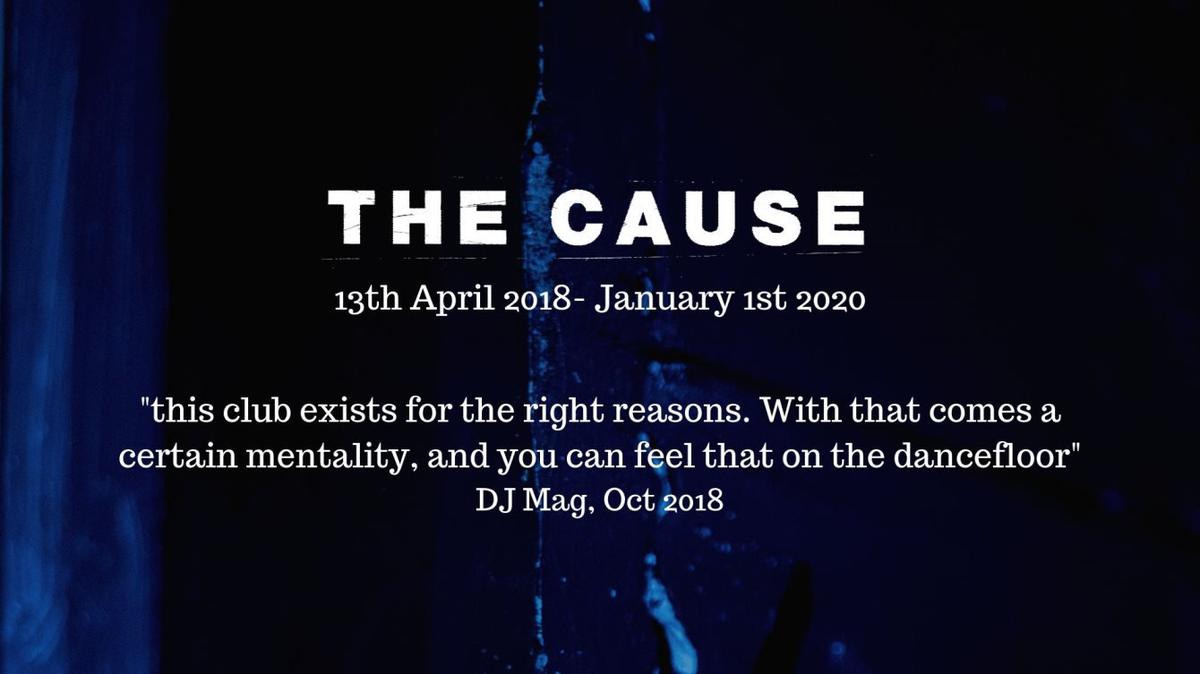 The Cause NYE 2020: Double Venue Party
Doors open at 2:00 PM
What was meant to be our last dance in our current space has morphed into the first dance of what may or may not be our new home. Both The Cause and our new space will be open all night long with shuttle buses on constant rotation taking you to our undisclosed location, just 4 minutes away. One ticket gets you access to both venues. As before, the lineup will remain a secret, but ticket holders can expect all strands of dance music over multiple rooms and two venues. The new space will be curated by one of the world most respected festivals, the truly underground, member's only Freerotation alongside The London Loft Party, which laid the DNA of The Cause and is responsible for the club's biggest show Tribes. Across both venues, expect some very BIG surprise guests who have never played the club before, alongside some of it's favourite friends and family. Please join us for a double venue adventure. This will never be repeated x 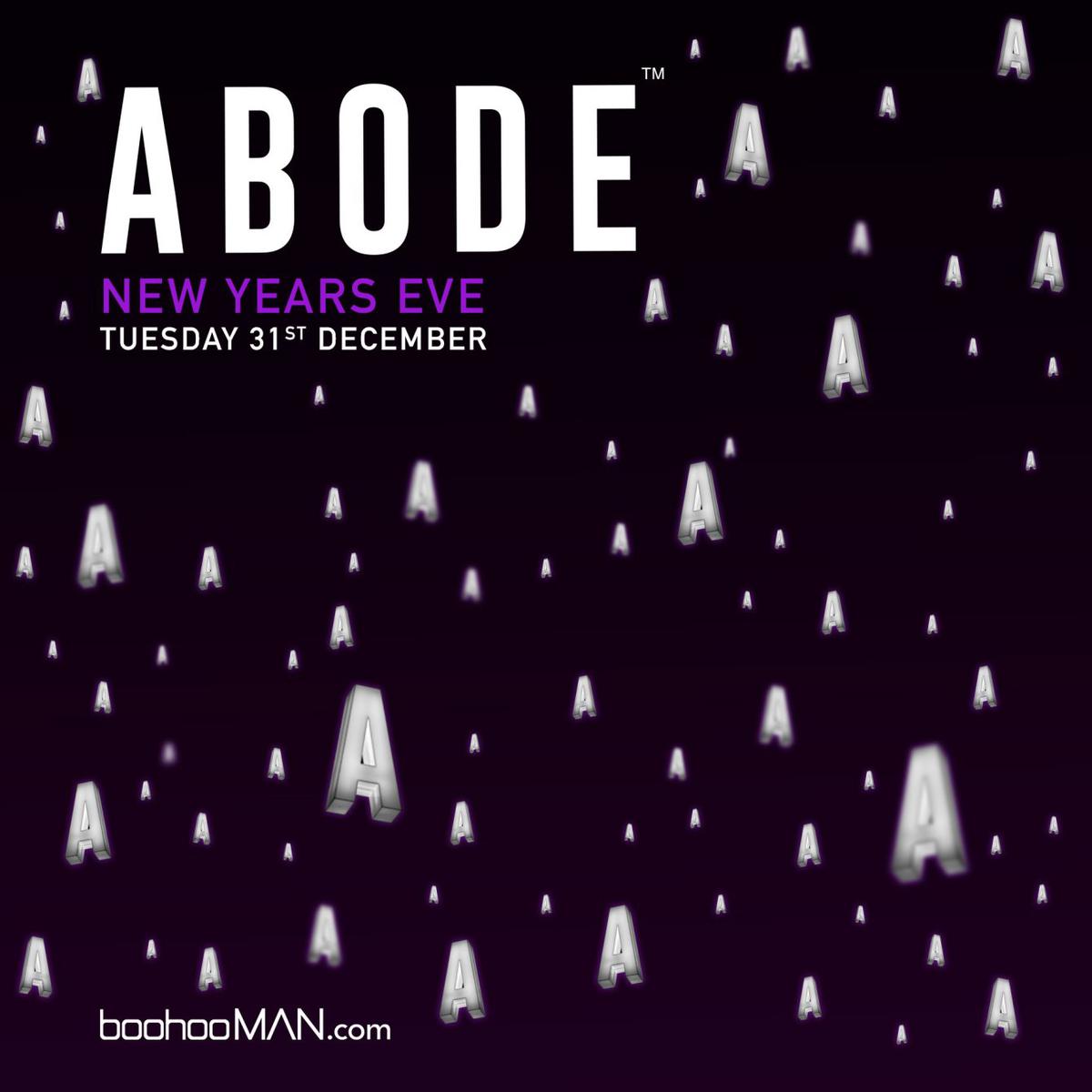 Sold Out: Abode Nye
Doors open at 6:00 PM
We started our year on this terrace... It's only right we finish this one on it too... What a ridiculous year. Over 35 events. 130,000 ABODErs. A clothing range. Development of The ABODE Project School and Orphanage. Trips to France, Ibiza, Dubai, Malta, all across the UK. 3 festivals. Sunsets at Cafe Mambos. Friends. Family. Memories. From house to techno, clubs to festivals, we've had it all. Thank you for being a part of our journey. #THEPEOPLESPARTY Please message us on social media with #NYE for ticket info 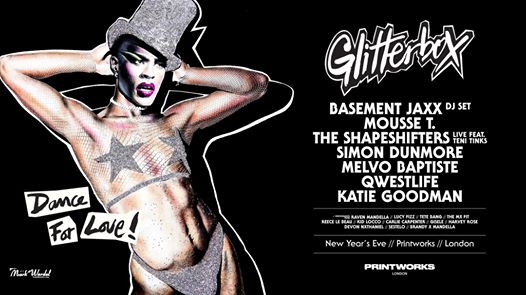 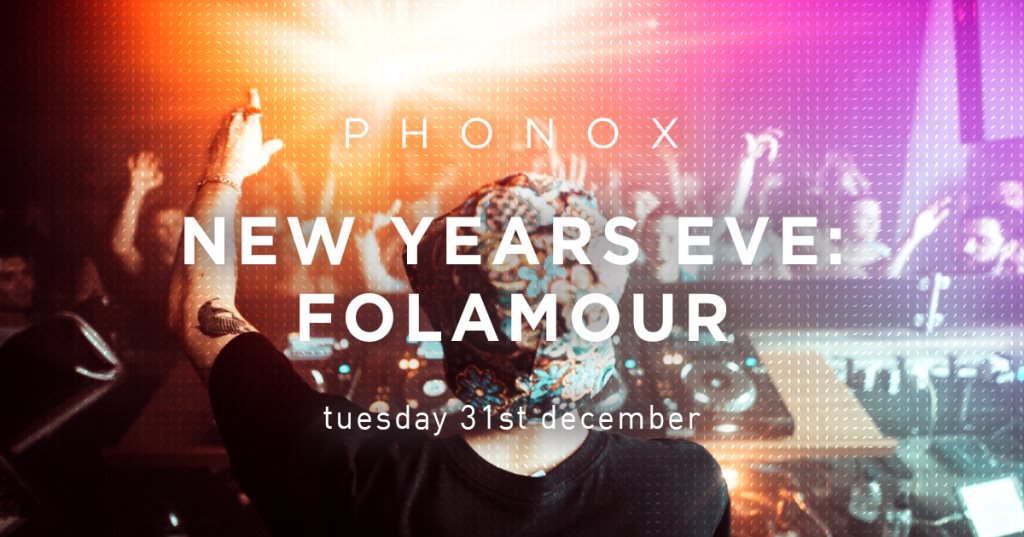 New Years Eve 2020: Folamour
Doors open at 9:00 PM
From his debut back in April, to a sold out four week residency in July, there would be no better way to wrap up what has been an incredible year together, than for Folamour to take charge of NYE 2019. It's going to be special. Doors for the bar open from 9pm, music starts at 9pm. 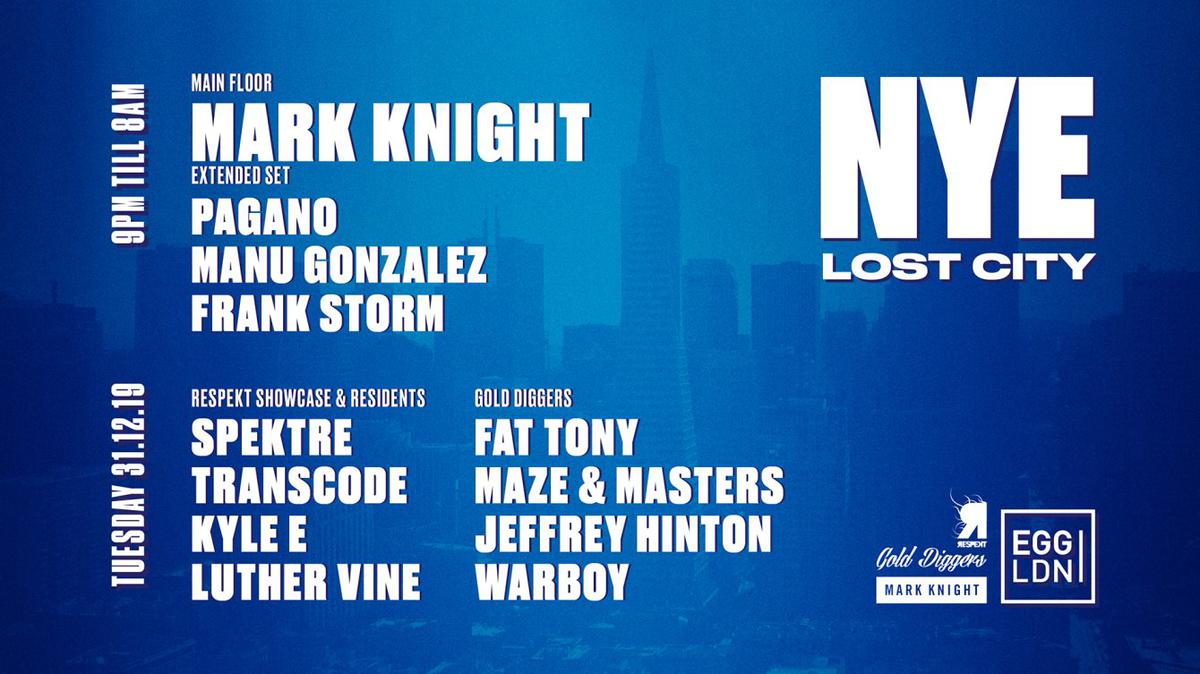 NYE 2020 / Mark Knight, Spektre, Transcode
Doors open at 9:00 PM
NYE is one of the biggest dates in the calendar, so for our 2019 NYE, we have brought Mark Knight home. Mark Knight will be heading up the main room with Egg Resident Kyle E. In-room two we have Spektre label Respekt hosting with Transcode in support. Sepktre has been a long favourite of Egg, and we’re so happy we get to celebrate 2019 with them. Joining Mark Knight, Spektre & Transcode will be Egg London Residents Kyle E & Luther Vine. Flying over from Ibiza will be Manu Gonzalez, Pagano returns to Egg London, rising star Frank Storm makes his debut and this couldn't be a NYE with out Gold Diggers hosting the loft with Maze & Masters, Jeffery Hinton & Fat Tony. ****** Egg London is a strictly 19+ venue. Club scan is now installed in the venue at the front door, which means everyone attending Egg must have a valid form of photo ID to present to be scanned on entry. The accepted forms of ID are: unexpired passport, driving license, provisional driving license, photo cards featuring the pass hologram. Photocopies, photos or screenshots of IDs are not accepted. 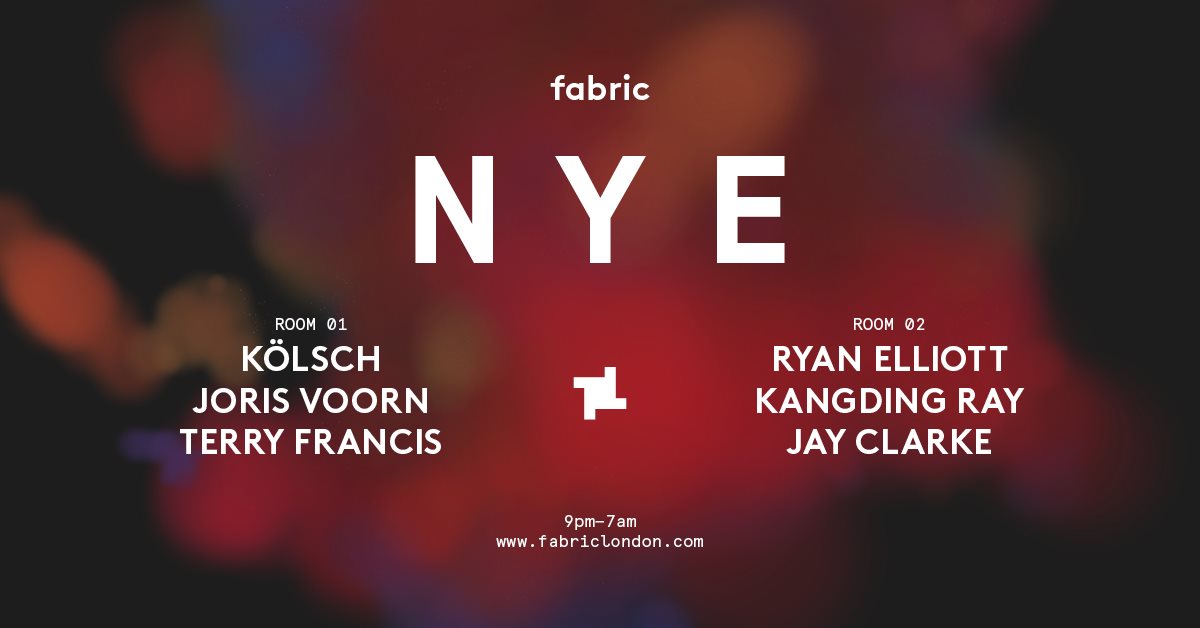 NYE 2020: Kölsch, Joris Voorn & Ryan Elliott
Doors open at 9:00 PM
We close out 2019 with a fitting cast of house and techno heavyweights. In Room One, we welcome back Kölsch, whose melody-powered house anthems have made him one of Kompakt’s key figures. He also runs his own label called IPSO, where he frequently collaborates with some of his closest peers. In recent years he’s become something of a regular fixture with us in Farringdon, championing his signature style of 4/4 through his killer late-night performances, as well as his excellent mix for our label series, fabric presents. He’s joined by Joris Voorn, the Netherlands artist renowned for his polished style of house and techno. Voorn’s signature sound comes to life in his epic DJ performances, where he displays his grip on melody via his expansive collection of modern techno cuts. It’s something we’re used to witnessing here in Farringdon, but outside of the booth, he’s also known for showing the same distinctive spirit through his productions on his label, Green. Room One is finally rounded out by a lauded selector known for his deep collection of technoid house fusions, our founding resident Terry Francis. In Room Two, we host a session of tough techno from some of the sound’s very best practitioners. Ostgut Ton champion Ryan Elliott returns, displaying the bag of deep four-to-the-floor records and surgical mixing prowess he regularly brings to both floors at Berlin’s storied Berghain/Panorama Bar club. He’s joined by Kangding Ray, the experimental artist whose work can be found on imprints like ara, Raster-Noton, and Stroboscopic Artefacts. The bill is completed by an artist whose driving approach to techno is now synonymous with our Room Two space, our resident Jay Clarke. -- Entry before 10pm tickets info: Give a price discount for arriving before 10pm. If you arrive after 10pm you will be asked to pay the price difference to the price on the door, and will be asked to queue with the non-ticket holders. fabric is an over 19s venue Please remember to bring ID with you. No ID, no Entry. fabric operates a zero tolerance policy to drugs. Anyone found with illegal drugs will be banned from the venue and reported to the police. 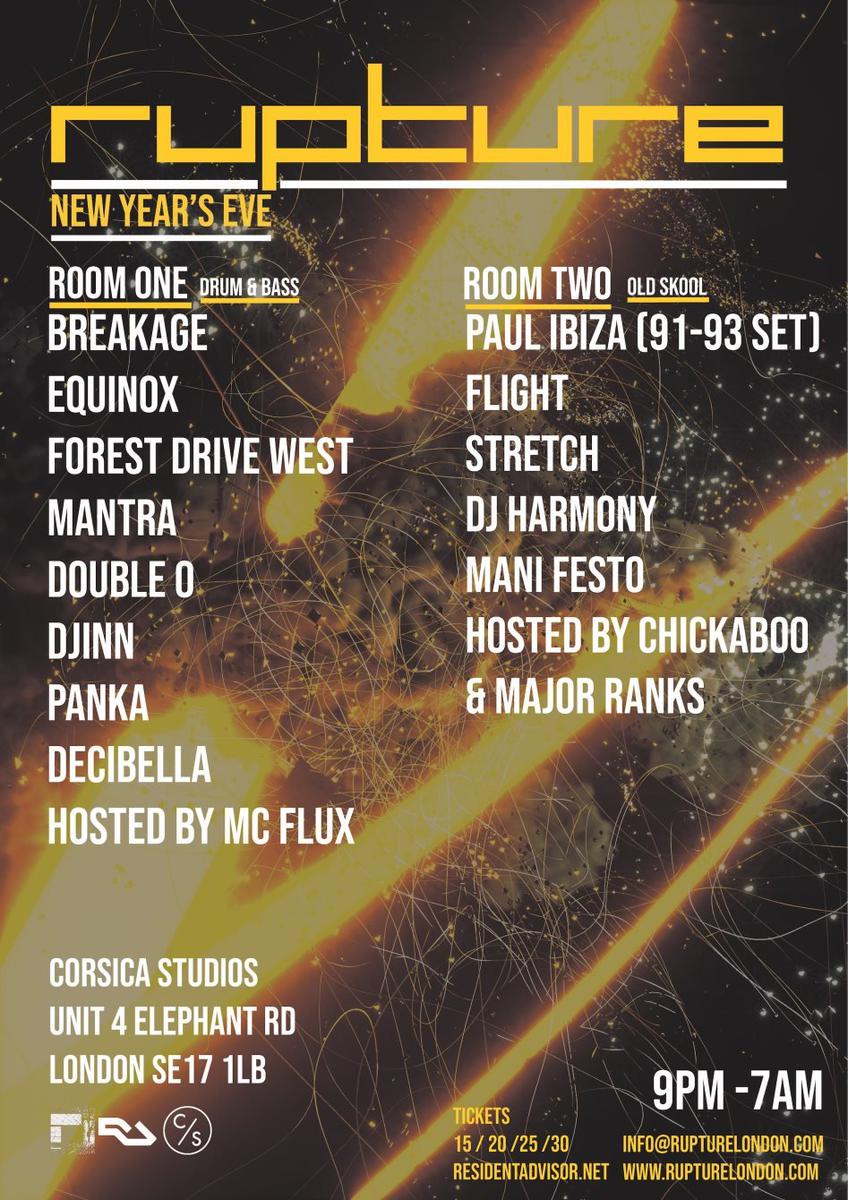 Rupture NYE 2020
Doors open at 9:00 PM
Corsica Studios has been our sanctuary for the last 11 years. Our vessel for pushing the best drum and bass straight from the heart! We’re so happy to be ending the decade and bringing in 2020 with our friends and family in true Rupture style. As it’s NYE we’ll be going all out for the count down - don’t miss it! 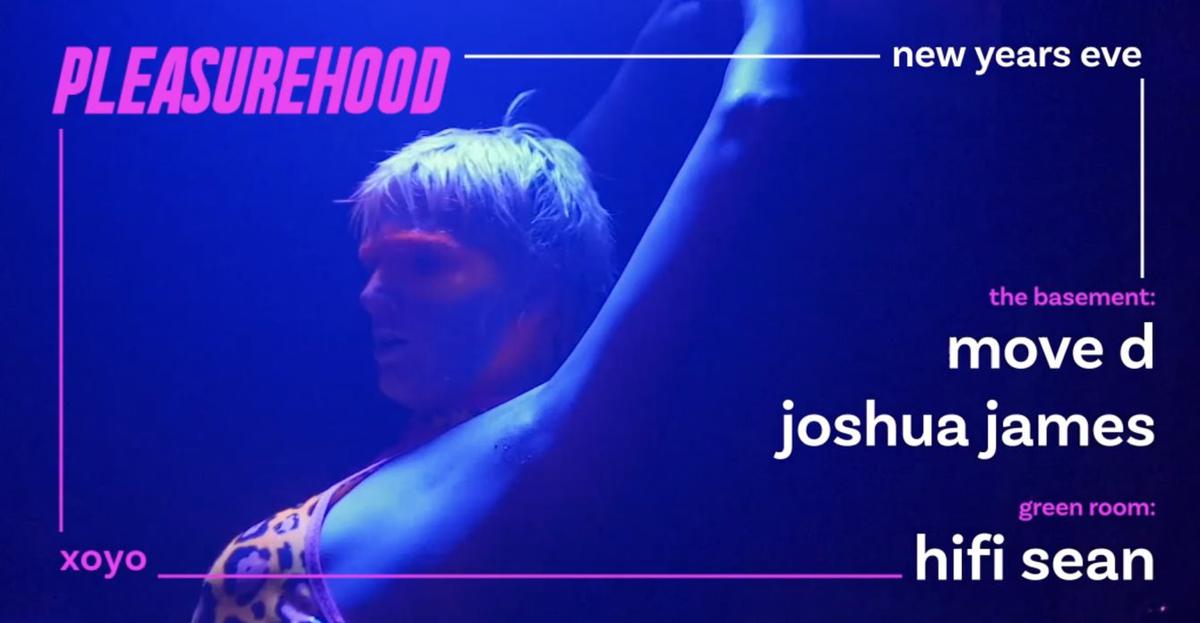 Pleasurehood. New Years Eve 2020 with Move D
Doors open at 10:00 PM
We're super excited to bring in the start of 2020, Pleasurehood style. This year we were busy creating our dream party. From the lighting and production to the dancers and performers. From handpicking a group of London’s best resident DJs, to producing countless euphoric dance floor moments... We couldn’t be happier with what we created and it's time to celebrate. For the most anticipated party of the year, we've got Move D and our Pleasurehood resident DJs, Joshua James & Hifi Sean. Don of house, disco & techno, all around selector and amazing DJ, David Moufang AKA Move D has been wowing the world since his first album release in 1995. As one of the most revered and respected DJs out there, with an eclectic mix of exciting music, we can't wait for him to return to XOYO. - Admission to XOYO is at management's discretion, advance tickets do not guarantee entry. If entry is refused to a ticket holder, you can obtain a full refund (minus booking fee) by contacting XOYO after the event at info@xoyo.co.uk. 19+