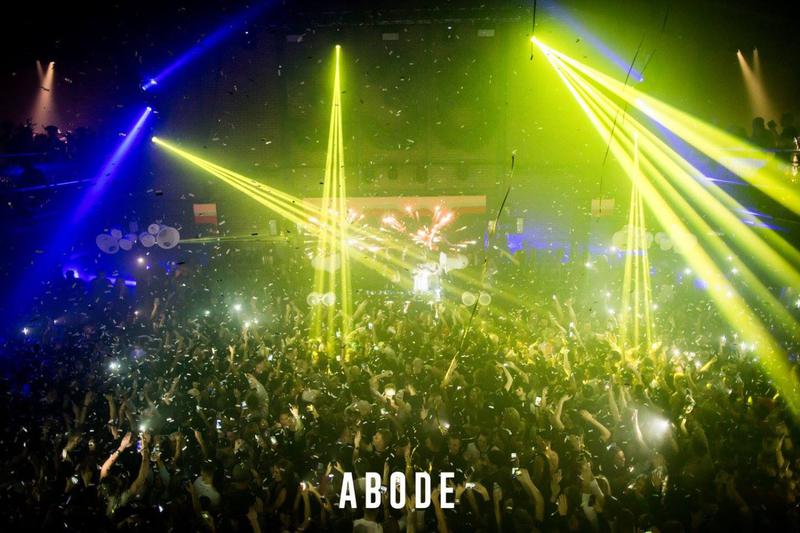 Abode - NYE 2018/2019
Doors open at 12:00 PM
We're back at our spiritual home for our favourite night of the year. After an incredible 2018, from Malta to Ibiza, Liverpool to Southampton, we see the year out where it all began. Studio 338. For tables please email [email protected] Tickets need to match names. You have to contact us directly on socials to ask for a ticket link. You'll need the link to gain entry. 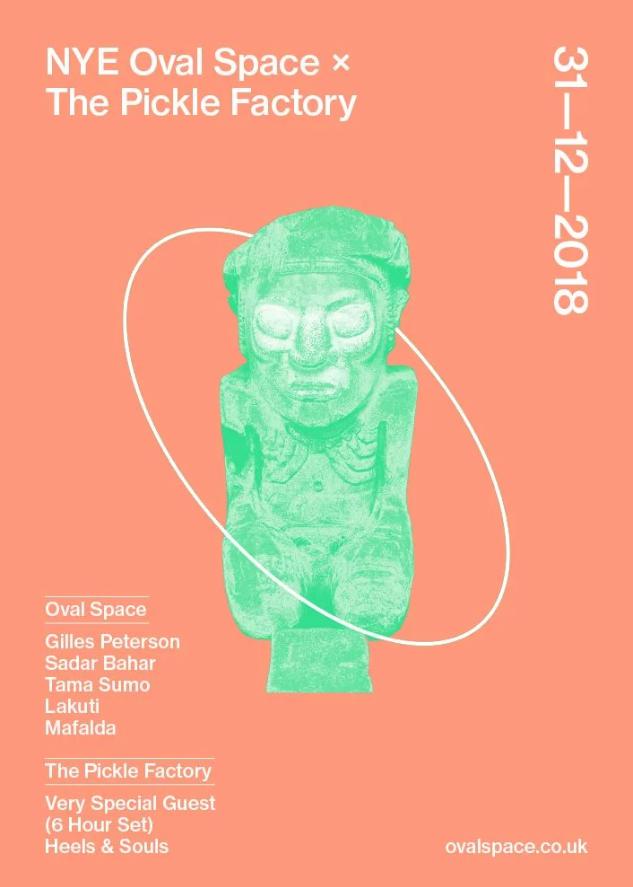 Gilles Peterson, Move D, Sadar Bahar, Tama Sumo - NYE 2018/2019
Doors open at 9:00 PM
This NYE Oval Space and The Pickle Factory join forces for a double-venue party befitting the magnitude of the occasion. Your ticket grants access to both venues, which hosts the finest DJ’s across the dance-music spectrum, accompanied by extra-special production flourishes. At Oval Space, UK icon and perennial tastemaker Gilles Peterson brings his Worldwide brand of house, disco, jazz and whatever else he plucks from his legendary 50,000 strong record collection. Joining him, Oval Space’s resident-in-chief Sadar Bahar flies over from Chicago, soundtracking the infamous midnight countdown with his unapparelled selection of rare funk and soul. Alongside Melodies International co-captain Mafalda, Panorama Bar’s Tama Sumo and Lakuti will then bring the focus to house and techno for a world class party until dawn. Meanwhile across the road at The Pickle Factory, peerless German artist Move D holds it down for 6 hours. David Moufang’s longevity is testament to both his timeless productions from the early 90s to the present day, and his imitable DJ style. You’d been hard pressed to find a better time for him to make a long overdue Pickle debut. Hotly tipped DJ duo and Secretsundaze favourite Heels & Souls are on warm up duties. Always our biggest party of the year, this one is guaranteed to sell out in advance, especially with the sumptuous line-up on display. Don’t sleep if you want to dance into the New Year with us. 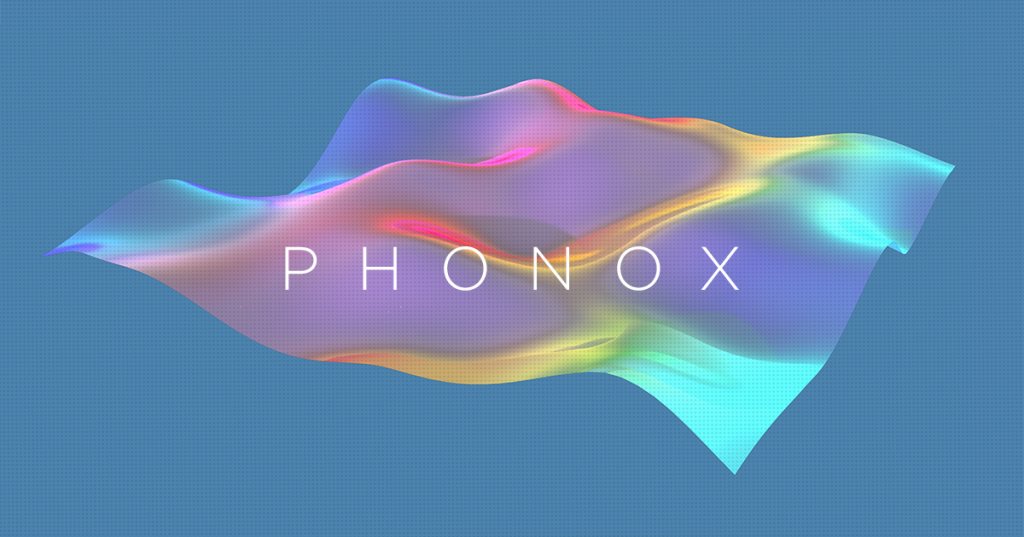 Young Marco & Esa - NYE 2018/2019
Doors open at 9:30 PM
Esa is our new Saturday night resident. Making his mark on the London club scene, Esa brings a fresh approach to clubbing, blending music from his travels and the artists and imprints he works with from Gilles Peterson to Dekmantel. Dekmantel party starter Young Marco powers up the club with his eclectic selection spanning everything from tropical rhythms, afro gems and quirky Middle Eastern disco, to throbbing house and techno. Marco joins our amazing resident, Esa, the perfect package to take us into 2019 in very high sprits. Doors for the bar open from 9pm, DJs start at 10pm. 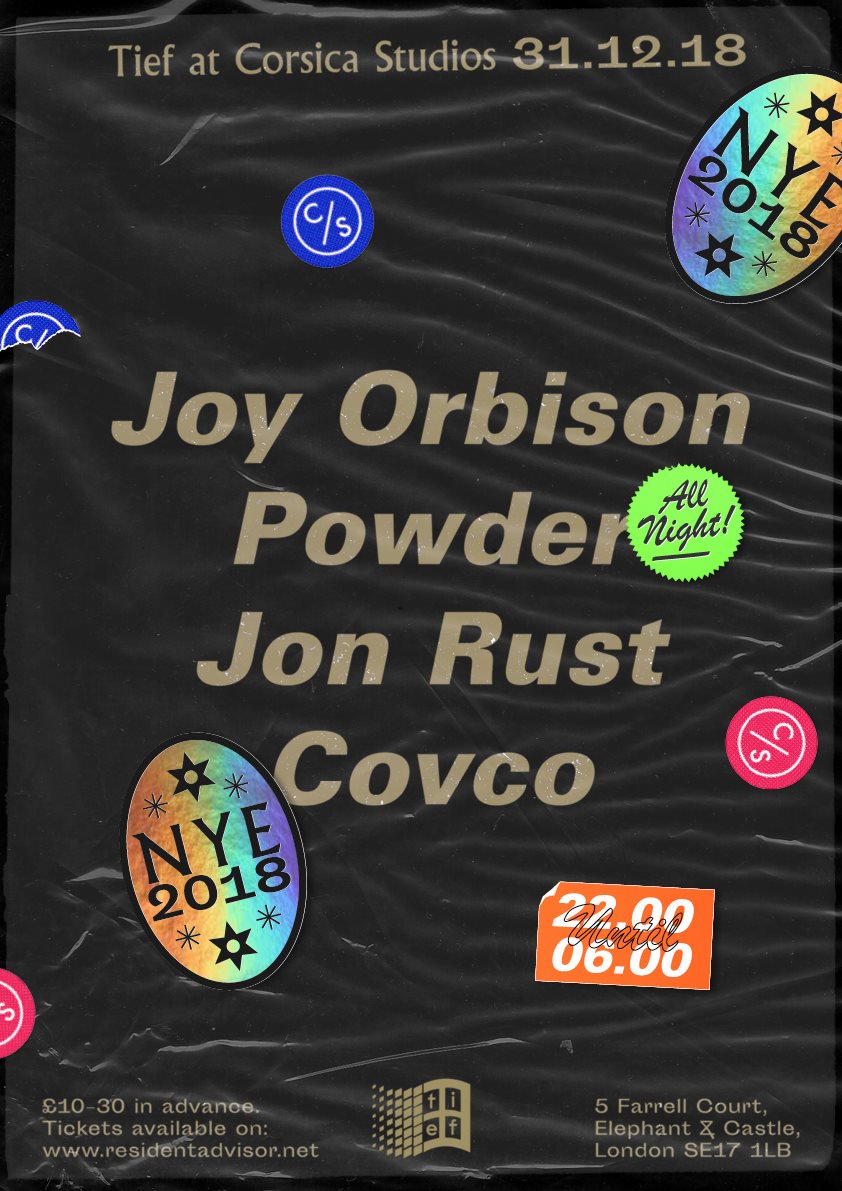 Joy Orbison, Powder (All Night), Jon Rust, Covco & More - NYE 2018/2019
Doors open at 10:00 PM
We welcome in the New Year with a pretty exciting crew of DJs.. Joy Orbison returns to Corsica with NTS regulars Jon Rust and Covco alongside him in room 1. Powder flies in from Tokyo for another all night long session in room 2, it's not the first time she has done this but going on how good it was, it won't be the last either - 6 hours of mind-bending trippiness! Advance tickets are of course highly recommended for this. As with every year it will sell out, but we will have a number of tickets reserved for the door and available from 10pm with a free glass of cheap champagne (or something fizzy) on the way in for the first 50 or so people. 2018 was ok.. hopefully 2019 will be better! - this party will be good either way. 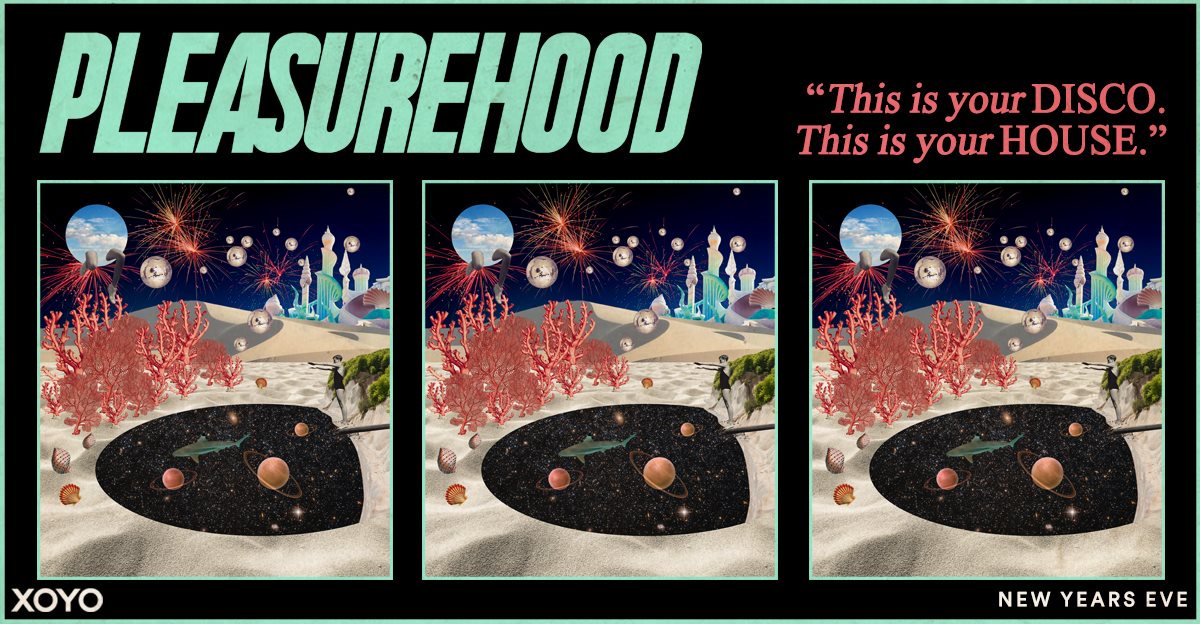 Pleasurehood: Jeremy Underground + O'Flynn + Bellaire - NYE 2018/2019
Doors open at 10:00 PM
This New Years Eve, all roads lead to Pleasurehood. A world of excess and escapism, soundtracked by the worlds finest DJs playing hands in the air house and disco. This is your disco, this is your house. - Having discovered the delights of house & disco from an early age, Jeremy Underground's passion for rare West Coast gems has marked him out as one of the most tenacious diggers around. For over two decades, the Parisian has been giving life to parties with his selections, ranging from high energy disco to lost New York productions. We welcome him to the club for an all out hands-in-the-air NYE blowout. Bellaire and O'Flynn offer support. Bellaire's prowess as DJ and producer has seen him earn a huge fanbase thanks, in part, to his bomb 'Paris City Jazz', which received plenty of airtime over the past year around the world. O'Flynn's reputation has been steadily growing in stature thanks to his own dancefloor destroyers "Desmond's Empire" and "Tru Dancing". Our treasured resident Joshua James delivers the goods in room 2, all night long, every Saturday. - Admission to XOYO is at management's discretion, advance tickets do not guarantee entry. If entry is refused to a ticket holder, you can obtain a full refund (minus booking fee) by contacting XOYO after the event at [email protected] If advance tickets are sold out, there will be a few hundred available on the door so feel free to walk up. We recommend getting down early to avoid queues. 20+ ID Required. 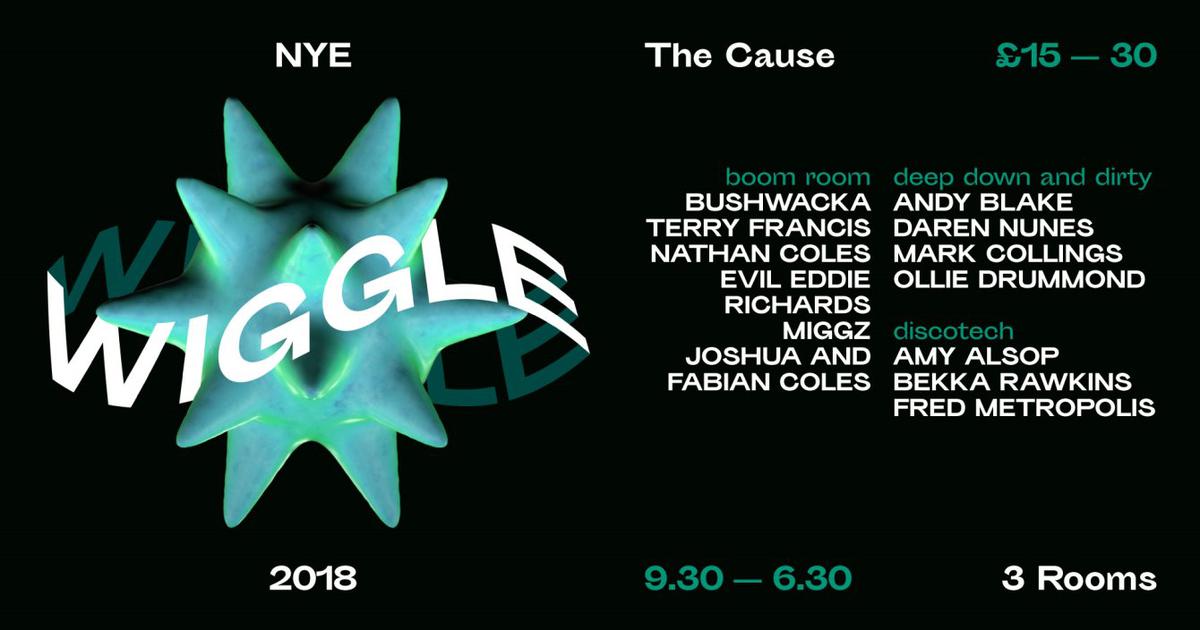 Wiggle - NYE 2018/2019
Doors open at 10:00 PM
Wiggle bumps back into action this NYE and this one will take us into our 25th year of grooving London. We've got the perfect venue for the night with The Cause in Tottenham Hale, which is only a short walk to the station and has great transport links all over the capital. With three rooms of music to get your earlobes wrapped around, there's more than enough to keep your feet busy! 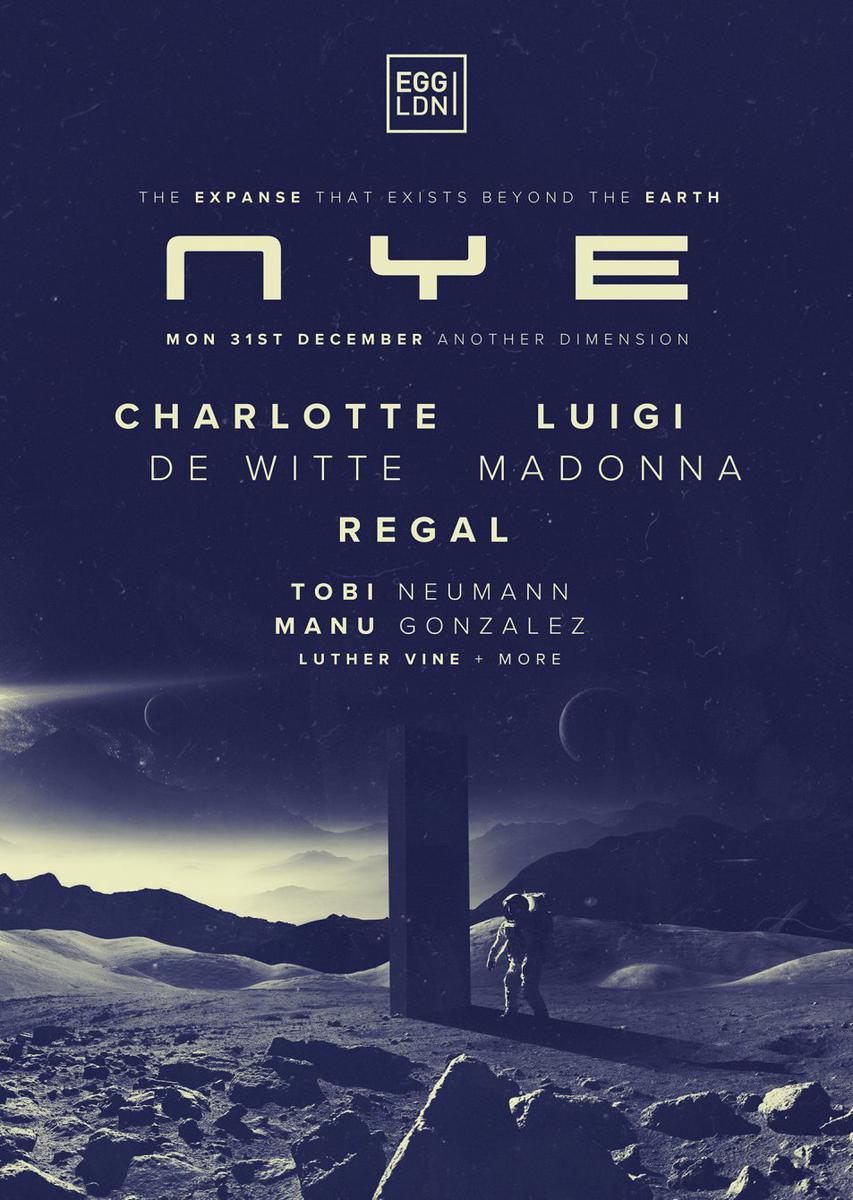 Charlotte de Witte, Luigi Madonna, Regal, Tobi Neumann, Manu Gonzalez, Warboy - NYE 2018/2019
Doors open at 10:30 PM
2018 has been a significant year for both ourselves at Egg HQ and our loyal followers who are the legacy of the club. Marking our 15th year as one of UK's longest running dance music institutions and continuing to evolve with our ongoing building work, it's been quite an exciting time for us to thrive and grow within London's current soundscape. We've welcomed a range of familiar and new faces to the club from FJAAK, Charlotte de Witte, Pan-Pot, Danny Tenaglia and Paul Ritch to Alison Wonderland, Jan Blomqvist, Colin Benders and many more... There has also been a slew of label showcases with the likes of Phonica Records and Viper making their debuts with room takeovers over the last year. The addition of our new resident and Phonica affiliate Luther Vine was another fresh talent added to the Egg roster while fellow resident, Kyle E, continued to support in the club itself and on the road for our 15 Years of Egg LDN World Tour. As we continue to evolve alongside our consistently strong bookings policy, NYE 2018 is going particularly monumental event for us this year with a huge special guest set to be announced on 29th October. Charlotte de Witte and Luigi Madonna will return while a newcomer to the club, Regal will play his first set which will undoubtedly complement the relentless tones of Luigi and our special guest. It wouldn't be NYE at Egg LDN without Tobi Neumann on the bill and after multiple releases on our in-house WCF imprint, Tobi returns with his engaging sound spanning multiple genres. Manu Gonzalez also returns after one of the busiest periods in his rising career and of course, releases on our WCF label. Warboy and our resident Luther Vine will also be on hand to deliver their own captivating sets with a wide range of beats covering house, techno and everything in between... New Year's Eve 2018 will be the culmination of a strong year of venue developments and musical progression for us. For table service contact: [email protected] Limited Privilege Tickets Include: * Champagne reception * Access to VIP-only lounge * 3 drink tokens * Canapes * Separate dedicated Q-jump entrance * Separate dedicated cloakroom * Free entry for 4th & 5th Jan Egg London is a strictly 19+ venue. Club scan is now installed in the venue at the front door, which means everyone attending Egg must have a valid form of photo ID to present to be scanned on entry. The accepted forms of ID are: unexpired passport, driving license, provisional driving license, photo cards featuring the pass hologram. Photocopies, photos or screenshots of IDs are not accepted. 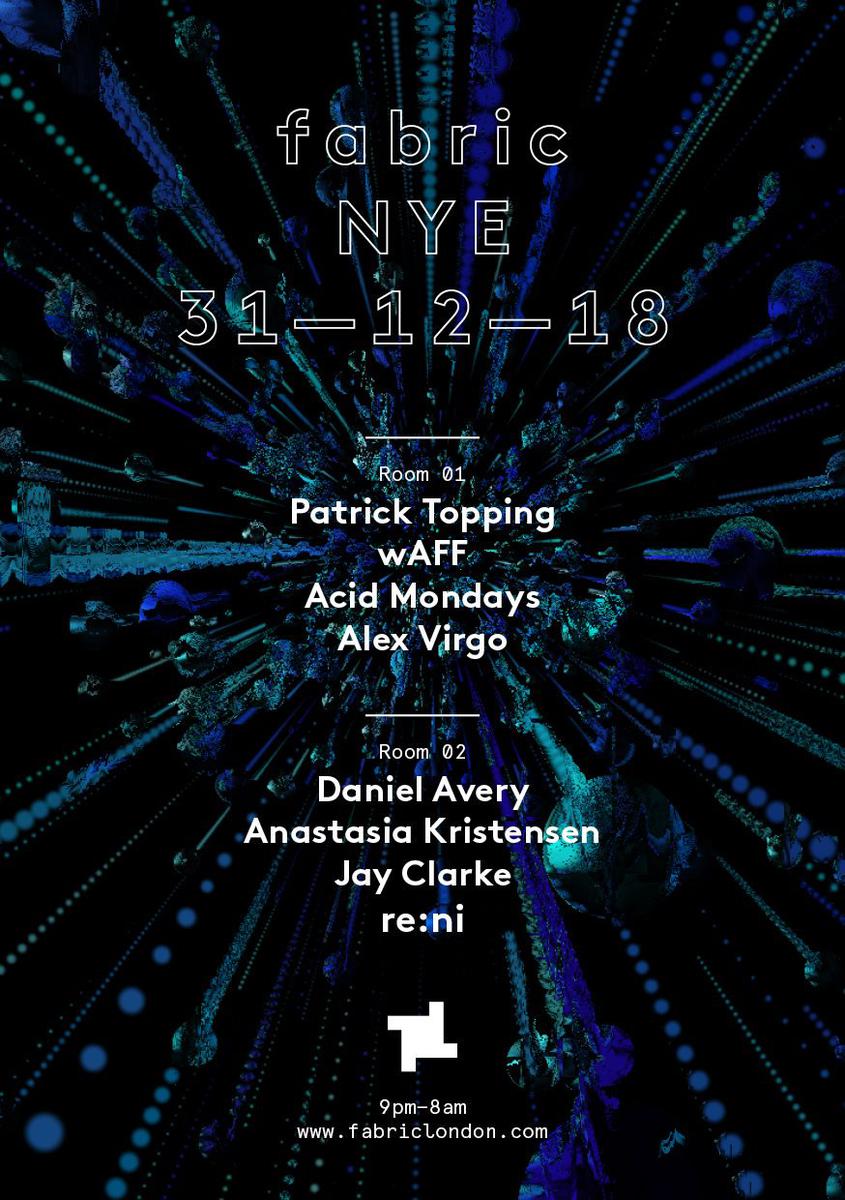 Patrick Topping, wAFF, Daniel Avery & Anastasia Kristensen - NYE 2018/2019
Doors open at 11:00 PM
For our final night of 2018, we invite a host of esteemed party specialists to round out the year. Leading the proceedings in Room One is Patrick Topping, whose distinctive style of floor-inclined house has brought him huge success in recent years. By now one of the stalwarts of the Hot Creations roster, the UK talent has become one of electronic music's most in-demand DJs, as renowned in Miami and Ibiza as he is on home turf. wAFF also makes a return to the space, bringing the definitive tech house sound that's made him one of today's best-loved DJs. Also preparing to return are trippy house experts Acid Mondays. Rounding off the Room One bill is a London-based DJ and producer on the rise, Alex Virgo. In Room Two, we're joined by Daniel Avery. A highly esteemed DJ, producer and label owner, the UK artist's work covers many angles. Behind the decks, he currently champions a mix of high-octane techno, buzzing electro, shadowy drone and ambient, styles that have come to define his individualist artistic voice. Having held his own Divided Love residency and made regular Farringdon stop-offs over the years, he's also had a long history with us throughout his career. Avery helps us kick off 2019 alongside a cast of DJs pushing the darker shades of electronic music. Anastasia Kristensen also returns. A regular guest with us in recent years, the Copenhagen artist's mixing puts a refreshed edge on the sounds of vintage techno and IDM. Farringdon regular Jay Clarke also brings his propulsive techno sound back to the space. A deft hand in raw, hypnotic techno, Clarke's production work can be found on Ben Klock's imprint, Klockworks. Finally re:ni makes her Farringdon debut. Rising to prominence as part of the siren collective, the London-based selector's collection of electro, techno and bass-led rhythms has since led to her forging her own path. -- Entry before 10pm tickets info: Give a price discount for arriving before 10pm. If you arrive after 10pm you will be asked to pay the price difference to the price on the door, and will be asked to queue with the non-ticket holders. fabric is an over 19s venue Please remember to bring ID with you. No ID, no Entry. fabric operates a zero tolerance policy to drugs. Anyone found with illegal drugs will be banned from the venue and reported to the police.