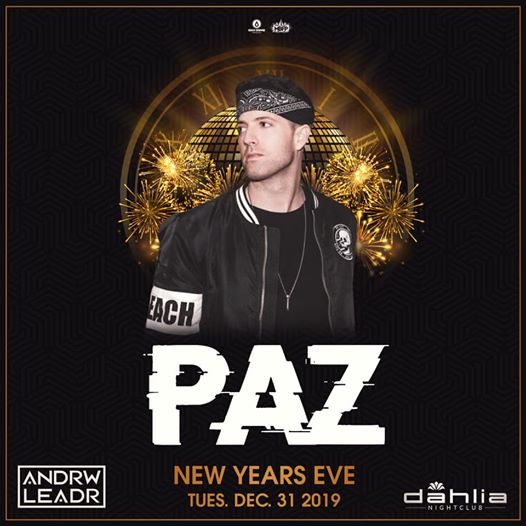 PAZ / Dahlia/ NYE 2020
Doors open at 9:00 PM
THE LAST PARTY OF THE DECADE Featuring sounds by PAZ with support from Andrew Leader & Kid Replay We will have a confetti blast and champagne toast when the clock strikes midnight! Text 614-989-5288 or email josh@livepeerless for all VIP section & bottle service inquiries! ABOUT PAZ PAZ is an electronic producer, vocalist, and multi-instrumentalist from Los Angeles, California. He also may just be the craziest dude you’ve ever met. Ask him about the time he stole Paris Hilton’s birthday cake and gave it to the homeless. Or the time he secretly plastered the Grammy Museum with doctored photos of himself eating tacos with Rihanna (they went unnoticed for more than a month). Or the time he replaced every Justin Bieber CD in Los Angeles — more than 5,000 of them — with his own records, carefully disguised and shrink-wrapped to look just like Bieber’s record “Believe” The latter incident gained PAZ international attention, getting his album discovered by everyone from SPIN to Billboard to USA Today and NME. From there it was only a matter of time before PAZ’s infectious brand of electronic music invaded the playlists of DJ’s, radio hosts and EDM lovers around the world. Characterized by warm, vocoded vocals, melodic synths, and enormous bass lines, PAZ’s music combines the progressive house influence of artists like Example and Audien with the vocal / electronic hybrid of artists like Krewella and Netsky. PAZ’s unorthodox live performances blend the traditional role of a DJ with the heart of a live instrumentalist. Drums, guitars, mics, mixers, and a twisted array of sample-producing MIDI devices comprise PAZ’s sprawling gear setup, which resembles something between a mad scientist’s laboratory and a postmodern DJ jungle gym. As he performs, PAZ is at once a chaotic whirlwind of DJ, instrumentalist and vocalist, occasionally leaving the confines of his CDJ’s to wield a pair of vocoded microphones, the sound from which he manipulates and contorts with the aid of a handheld Wiimote. PAZ’s new album “From The Bottom Of My Heart To The Top Of Your Lungs” is slated to drop July 4th. It features 13 new collaborations and remixes with some of the hottest up and coming EDM artists in the world, including Crywolf, Kill The Noise, Dillon Francis, and UZ. You can find PAZ online at: www.facebook.com/paz www.instagram.com/whoispaz www.twitter.com/pazpaz www.soundcloud.com/whoispaz www.youtube.com/thisispaz SNAPCHAT: PAZPAZ