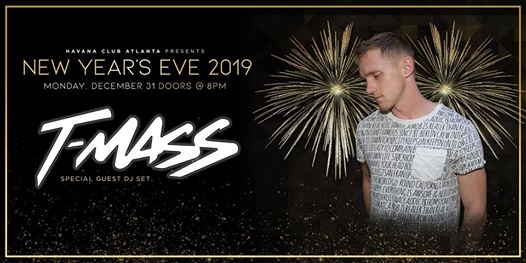 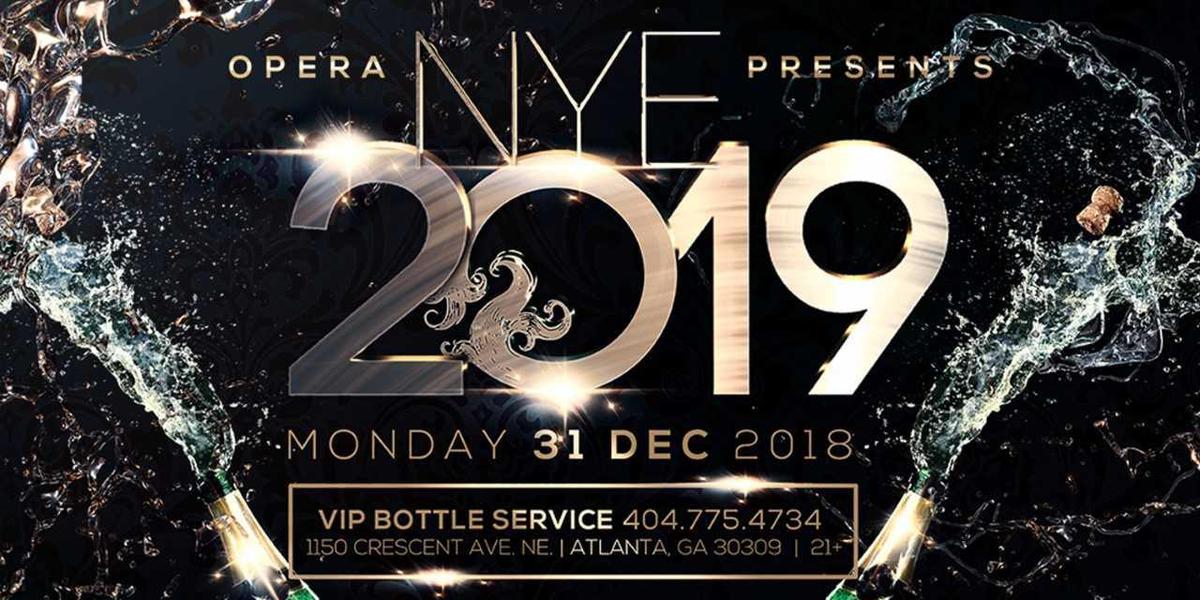 New Years Eve 2018/2019
Doors open at 8:00 PM
Opera Atlanta presents New Year's Eve 2019 on Monday, December 31st, 2018! The #1 New Year's Eve party in Atlanta, GA and the most spectacular event of the year returns on Monday, December 31st 2018! - 6 Hour Premium Open Bar - Award-winning Gourmet Buffet - Multiple Rooms, DJs & Environments - Balloon Blasts, Confetti Cannons & SO much more! 21+ Welcome | Doors Open: 8pm DRESS CODE The following articles are prohibited: Athletic gear and apparel, t-shirts, shorts, torn or cut-off clothing, men's sandals, hats, baggy clothing, chains, offensive prints on clothing, weapons, controlled substances, eye drops, gum, outside food or beverages, liquids, vitamins, supplements, over-the-counter medications, prescriptions medication without a valid prescription, cameras/go-pros, smart glasses, wearable technology, selfie sticks, the use of vaporizer 'vapes'. Any devices found in use will be confiscated and disposed of by management without compensation. Guests noticeably intoxicated or under the influence of a controlled substance will be denied entry and will not be eligible to receive a refund. All persons, bags, and personal items are subject to search. If you remove your shoes, you will be immediately escorted out of the venue. You must be 21 years of age with a valid form of ID. Management reserves all rights. ALL TICKET SALES ARE FINAL. No refunds or exchanges. **Prices do not reflect door pricing** 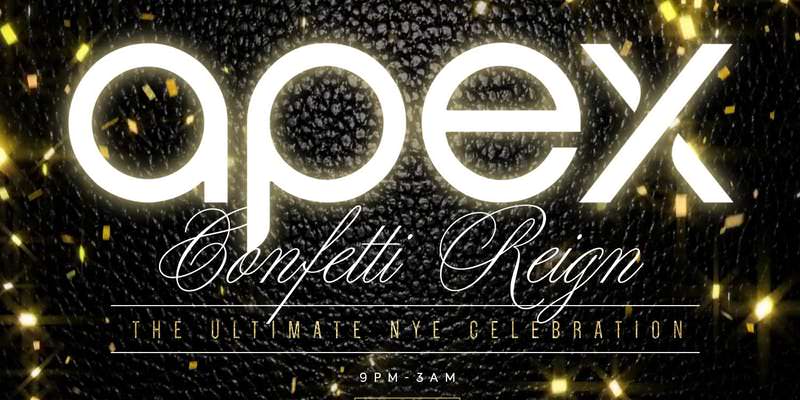 Confetti Reign - NYE 2018/2019
Doors open at 9:00 PM
Don't gamble with your NYE experience! THIS EVENT HAS SOLD OUT 4 YEARS STRAIGHT! As a result, we have DOUBLE the space and experience! Have a taste of the High-Life at the APEX Penthouse.......OR, Live Glorious in Confetti Reign! YOU CHOOSE! You even have the option of indulging in BOTH levels! What can all agree on, is this event will be the destination for young professionals who want to enjoy the fruits of their labor in 2018, letting loose and manifesting positive energy to continue winning into the New Year! The City's Most Inclusive NYE features: 4 Transformed Environments Balloon Drop & Confetti Reign 2 Heated & Covered Levels of Vegas-Style Ambiance & Entertainment Heated Entry VIP Open Bar Tickets available with passed Appetizers & Cigars 4-Course Dinner & Buffet Options Complimentary Photo Booths Dancing Go-Go Dolls NYE Soundtrack by V103's DJ PNUT, SUPREME THE DJ, DOS DIAS DJ STUNNA & More! Surprise Guests Champagne Toast at Midnight Broadcasted LIVE on V103 Penthouse view of the Fireworks & More! Coat Check & Valet Party Favors 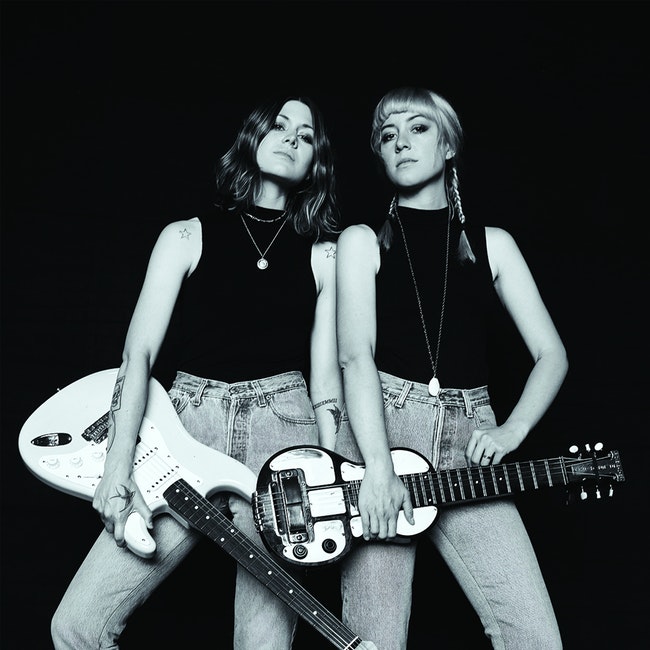 Larkin Poe - NYE 2018/2019
Doors open at 9:00 PM
Larkin Poe have found their voice. In a genre as storied as American roots and soul, the sister duo are poised to make a mark all their own with the release of their fourth album Venom & Faith, out November 9. Rather than concede to the history of the canon they hold dear or rest on their laurels, Larkin Poe persist and emerge rattling, stomping, and sliding into a modern-day depiction of what roots rock should sound like. Another chapter in an everlasting story.“It’s a celebration of roots American music,” Rebecca says, “as translated by two sisters who are playing the blues in a modern age.Steeped in the traditions of Southern roots music the Georgia-bred, Nashville-based Rebecca and Megan Lovell showcased their mastery in orchestrating, harmonizing and breathing new life into the musical heritage of their upbringing with 2017’s Peach, which was nominated for a Blues Music Award for Best Emerging Artist Album.Recorded and produced entirely by the sisters and their engineer Roger Alan Nichols, Peach featured a mix of original songs and covers like Lead Belly’s “Black Betty.” The making of Peachunlocked a gateway into Rebecca and Megan’s newfound confidence in their art and their history.On Venom & Faith, the sisters once again tackle a majority of the instrumentation on the album. In addition to covering lead vocals and a wide range of musical instruments, Rebecca creates lush musical underpinnings that range from horn sections to hip hop drum elements. In tandem, Megan masterfully skewers the lap steel and twins her voice together with Rebecca’s to create their unique blend of sister harmony. The album’s title, Venom & Faith, is taken from a lyric on “Honey Honey” and, according to the sisters, is intended to conjure a southern gothic image. “The title of our last album, Peach, was an homage to our Georgia-roots. With this album, we wanted a title that would allude to the duality of our art: gritty guitars offset by gentle vocals; musical moments of both tragedy and joy; the sacred and the profane.”Save for two covers, ”Sometimes” by blues legend Bessie Jones and Skip James’ “Hard Time Killing Floor Blues,” the rest of the record’s tracks are Larkin Poe originals. Paired with unique production touches, like organic percussion sounds —the thumpingof dresser drawers, the slamming of back doors, and stomping on hardwood floors —Venom & Faithbleeds Lovell.Recorded in Nashville in 2018, in between headline shows, festival dates such as Bonnaroo and Lollapalooza, and a featured guest performer spot on Keith Urban’s GraffitiU world tour, Larkin Poe approached Venom & Faithwith fierce independence. From Rebecca’s powerful vocals on “Ain’t Gonna Cry” to Megan’s sultry lap steel on “Good And Gone,” the sisters weave their talents into the fabric of their experience and a picture of the American south. “Blue Ridge Mountains” harkens to the sisters’ hometown, “drinking sweet tea every day,” with stomping percussion and churning riffs. “Mississippi” enlists the slide stylings of friend and seasoned guitar legend Tyler Bryant.Still, the sisters maintain an outlaw mindset in a traditional genre. Venom & Faithredefines what it means to make emotionally resonant music while also maintaining boundary-pushing musicality.Unbound by tawdry embellishments, Larkin Poe infuse pop sensibilities into their sound, blending old-school elements of rock and soul with drum samples, hip-hop production elements, and resonant lyrics like “California king-sized dreams in a twin bed.” Since forming in 2010, Larkin Poe have proven a formidable duo both in and out of the studio. In 2014, producer T-Bone Burnett enlisted Rebecca and Megan for Lost On The River: The New Basement Tapes, a project that also saw contributions from Marcus Mumford (Mumford & Sons) Elvis Costello, Jim James (My Morning Jacket), Taylor Goldsmith (Dawes), and Rhiannon Giddens. The sisters have performed at such esteemed festivals as Glastonbury (twice) and Newport Folk Festival; have opened for and been in the backing band of Elvis Costello and Conor Oberst; and supported the likes of Gary Clark Jr. Rebecca and Megan were also members of the all-star backingband for the 2017 MusiCares Person Of The Year tribute honoring Tom Petty (also organized by Burnett) alongside Jakob Dylan, Jackson Browne, Elle King, Lucinda Williams, Gary Clark Jr., Don Henley, and Randy Newman. But on Venom & Faith, the Lovells areon their own, tapping soulful veins from whence a new iteration of Southern-inspired pop soul flowed. “Going into this record, we were feeling more confident in ourselves and our story and our voice,” Megan says. “And having found our voice —we wanted torealize that.” 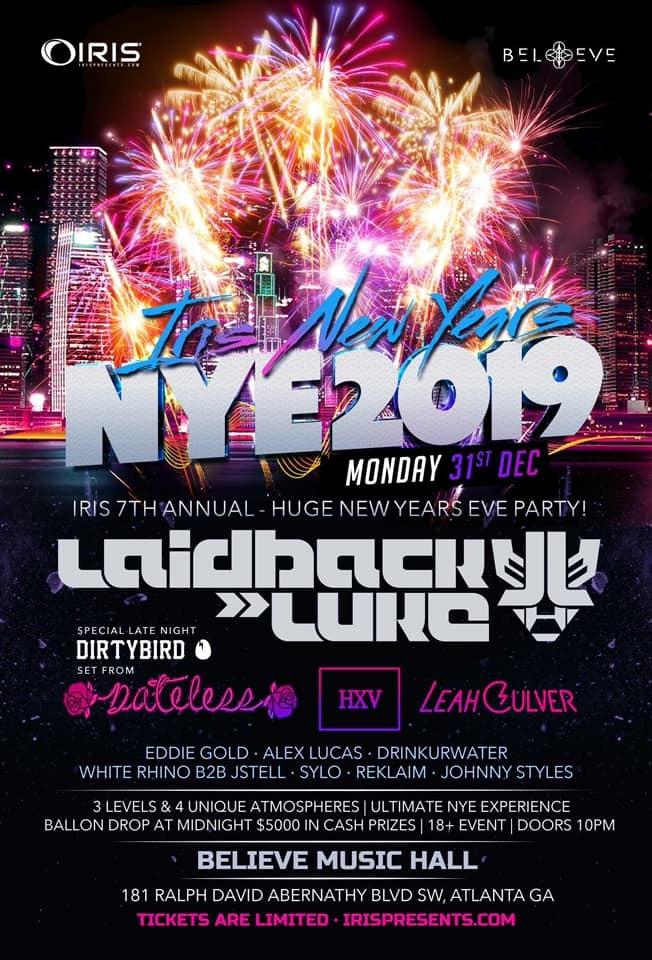 New Years Eve 2018/2019
Doors open at 9:00 PM
The 7th Annual IRIS New Year’s Eve: “A New Year to Believe In” Monday, December 31, 2018 “Atlanta’s #1 New Year’s Eve Experience” The Ultimate Wonderland Featuring: LAIDBACK LUKE POSSO (just added)!!! ! DIRTYBIRD / DATELESS HXV LEAH CULVER PLUS MANY MANY MORE !!!!!!! ! Journey through 3 Levels & 4 Unique Atmospheres of Make Believe “Believe” LAIDBACK LUKE | LEAH CULVER | EDDIE GOLD | ALEX LUCAS Lose yourself in an acoustically mastered music hall filled with a spectacle of lights, lasers, special effects and the #1 sound system in the world by d&b audiotechnik. When midnight strikes, experience Atlanta’s largest and most sensational balloon drop falling 3 stories with dazzling displays of glitter, confetti and over $5000 in cash and prizes. “Wish Lounge” HXV | DRINKURWATER | WHITE RHINO B2B REKLAIM | DIRTYBIRD Late Night set by DATELESS An EDM Industry Mixer filled with a delight of party favors, drink specials, giveaways and heavy bass sounds. Make a wish for the new year during our exclusive “Wish” Balloon Drop and dance until the late night hours with a special Dirtybird set by Dateless. Plus Enjoy: - Welcome Party from 8 - 10 - Hookah Lounge - Candy Station - New Years Eve Party Favors & Goodies - “Wish” Balloon Drop at midnight with $3000 Cash & Prizes “Eden” JOHNNY STYLES Step outside into a perfectly heated garden of lights for a breath of fresh air, and a beautiful downtown skyline view,. "Eden" will also offer a covered patio with outdoor bars with no lines, lounge seating, and open format music. “The Terrace” Catch a breathtaking Skyline view of Atlanta and intimate glimpse of the Downtown Fireworks Display. Classic 80’s beats provided by Sylo & Jstella VIP PACKAGES INCLUDE: - Mezzanine VIP Level Exclusive Access - Separate VIP Entrance - Private VIP Bathrooms - Complimentary NYE Toast - Private Security - VIP MUST BE 21+ Doors 8:00pm - 3:00am Address: 181 Ralph David Abernathy Blvd SW, Atlanta GA 30312 18+ to enter | VIP 21 + This event 100% sells out every year...Come see why we are voted the #1 NYE event in Atlanta, 7 years running! --> HUGE $5000 cash & prizes balloon drop at midnight (get there early) on one floor and a completely separate HUGE $3000 cash & prize balloon drop at midnight downstairs at "Wish" -> Free NYE party favors --> Free giveaways all night -> The very best lineup --> The very best in sound, lighting, & lasers -> The very best NYE experience you have ever had and memories that will last a lifetime! Experience Atlanta's newest live music venue. Originally built in the 1900’s, the repurposed church has been transformed into a groundbreaking multi-purpose venue. The interior design ensures unobstructed sight lines to the cutting-edge high-end production. Comprised of four separate event spaces arranged over three levels, the venue features two full stages, a mezzanine, and two outdoor terraces with breathtaking views of the Atlanta skyline - the 15,000 sq ft concert hall is a one of a kind destination. At its core, IRIS focuses on high quality production coupled with a multi-sensory experience that sets the venue apart from other Atlanta spaces. Concert-goers can have an up-close view of the main stage on the large open dance floor, or enjoy a high-energy VIP experience at any of the elevated VIP tables. Wander between 3 levels to gain a perfect view from above on the Mezzanine and eventually discover the downstairs for an entirely unique and more underground experience. This is "The Church" that started it all back in the nineties - come and re-live history and be a part of the future of IRIS ESP101 [Learn to Believe] "for those that know." Location: Believe stands tall at the Northwest corner of Ralph David Abernathy and Central Avenue in the heart of Atlanta. Parking: Please park in one of our adjacent lots either RED or YELLOW off of Central Avenue. These lots are secured all evening. Entry: GA Ticket Holders and Walk Ups: Use the Front Entrance on Ralph David Abernathy Blvd VIP Ticket Holders Guestlist and Table Guests: Use the side entrance located by the Patio in our parking lot NB: BUYER BEWARE: Eventbrite is the ONLY authorized ticket seller for this event. If you buy a print-at-home-ticket or hard ticket from an unauthorized vendor or source (ie: Stubhub, ebay, craigslist) we cannot guarantee that it is a valid ticket. Eventbrite and Believe are not responsible for any counterfeit tickets and cannot provide refunds or exchanges.

New Years Eve 2018/2019
Doors open at 9:00 PM
A LIMITED AMOUNT OF GENERAL ADMISSION TICKETS WILL BE AVAILABLE AT THE DOOR. PLEASE ARRIVE EARLY. Atlanta's hot spot for over 20 years is preparing to ring in the New Year in a big way. Tongue and Groove welcomes clubgoers to ring 2019 with a world-class celebration and unforgettable NYE affair Monday, December 31st. The boisterous party will feature DJ Danny M and Dj Weaponz. The bill includes 6 hours of non-stop entertainment with 2 unique environments, Champagne Toast, Midnight Snacks, Party Favors, Balloon Drop, and more. All the action in Atlanta will be under Tongue and Groove in Lindbergh Center. General & All-Inclusive Tickets available at www.tandgonline.com. 21 and UP I Dress Code Enforced | All orders are final 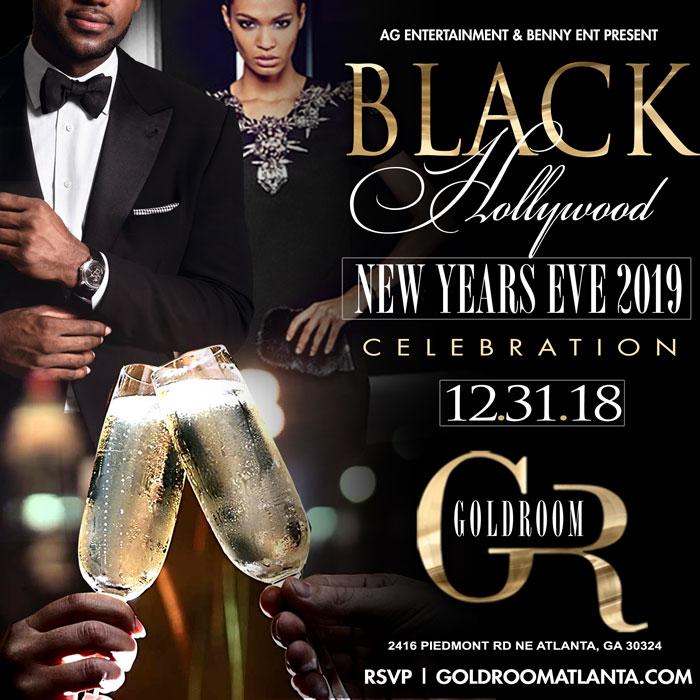 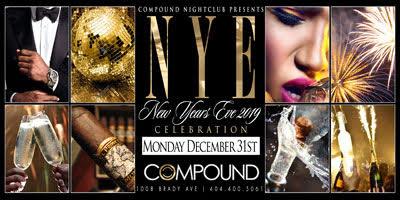