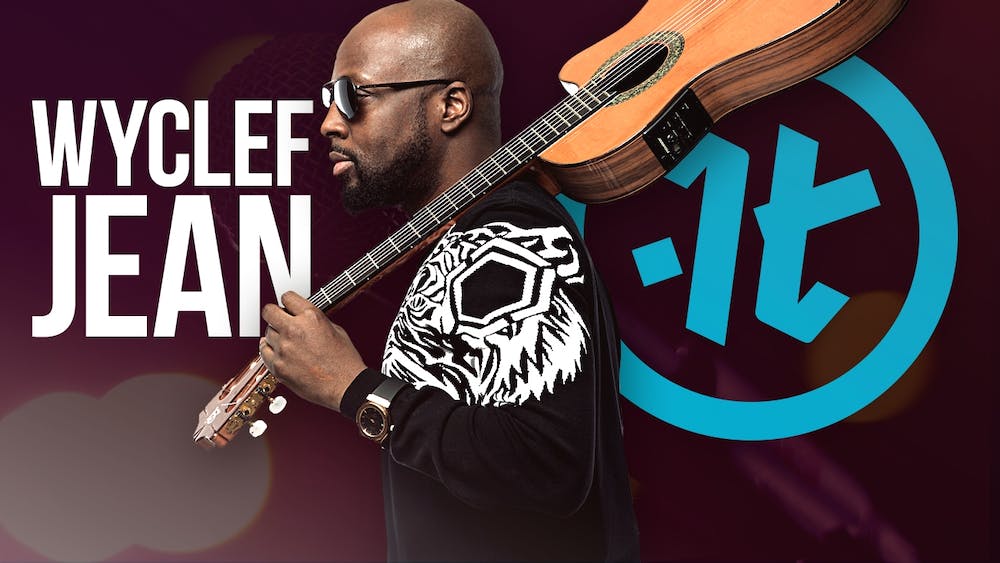 Follow Wyclef Jean to get alerts about upcoming events and special deals!

Wyclef Jean's extraordinary musical talent has brought him wealth and fame and taken him all over the world.

Wyclef Jean has performed in venues such as: On the Record, LIV, E11EVEN, Light, 1015 Folsom, Beachclub, Belly Up, Great Lawn at Central Park, Jones Beach Theater, Music Box at The Borgata

Without further ado, here are Wyclef Jean top 10 tracks of all time:

7. Killing Me Softly With His Song

Wyclef Jean's extraordinary musical talent has brought him wealth and fame and taken him all over the world. He's been a member of the biggest-selling rap group in history, he's a multi-platinum hit-making solo artist; and he's produced for, and collaborated with, an incredibly diverse array of musical superstars. But throughout his entire career, Wyclef Jean has never forgotten where he's come from, the places that nurtured his character and creativity as a young man: his native Haiti, where he lived until age nine, as well as the projects of Brooklyn and the streets of Jersey.

On Masquerade, his third solo album, Wyclef focuses his considerable lyrical and musical skills on life in the hood: past, present, and future. There are vivid tales of his childhood and his struggles as a young immigrant on the mean streets of New York, serious messages to the youth wrongly enamored of thug culture, and pleas for peace and love in the future--all backed by the eclectic and unpredictable sounds we've come to expect from a Wyclef Jean CD. Hardcore hip-hop beats, R&B funk, slow jams, and uptempo reggae--they're all here, sometimes all in the same track. Masquerade represents the next step in the musical development of an artist who's known unalloyed success since first stepping onto the scene nearly ten years ago, and who shows no signs of slowing down.

Wyclef Jean, of course, first hit it big as a prime mover in the groundbreaking Fugees, whose 1996 masterpiece The Score stands as one of the most influential records in hip-hop history. On that album, Wyclef pioneered a production style that became virtually unavoidable throughout the rest of the '90s: real life street hip-hop seasoned with a radio-friendly musical, lyrical and vocal sophistication. The Score sold more than 11 million copies worldwide, won two Grammys (including Best Rap Album), and paved the way for the successful solo careers of all three of its members. In 1997, Clef released Wyclef Jean Presents the Carnival, a double-platinum album that featured the emotionally powerful hit single "Gone Till November," which earned him a Grammy nomination in the Best Male R&B Vocal Performance category.

Clef's second solo CD, The Ecleftic -- 2 Sides II A Book, was even more musically adventurous than his previous work, from the booty-shakin' "Dirty South" to the socially-conscious neo-protest ballad "Diallo" to the R&B smash "911" which found Clef dueting with Mary J. Blige. In addition to his solo work, Clef found time to collaborate with Whitney Houston on her smash "My Love Is Your Love" and Carlos Santana on his chart-topping hit, "Maria Maria". More recently, Wyclef's worked with Mick Jagger and Sinéad O'Connor on their latest releases, as well as collaborations with U2, Destiny's Child, Michael Jackson, and Rita Marley.

The spiritual element that's always been crucial to Wyclef's music is immediately apparent on "Peace God," the first track of Masquerade. Clef calls this his "Crouching-Tiger style": a Far East flute is looped over a hip-hop drumbeat while Clef rhymes in praise of God and against false idols made by man. Whether adopting the persona of the Preacher's Son or a Thug Angel, Clef has always illuminated ghetto reality as he sees it, taking on the tone of a wise older brother rather than a strident preacher. "The PJs" is an ode to the projects Clef grew up in and the lessons he learned there: "Gotta make noise for the PJs/I wrote my first rhyme in the PJs/You can hear it in my speech, I'm from the PJs." This is a playful tribute to the harder life he's left behind as well as a reclamation of his status as a hip-hop artist, first and foremost.

There's no other musician today who seems so natural in so many different genres. "Masquerade" is a hardcore posse track featuring M.O.P., but while other producers might be content to just let the beat run, Clef brings on accomplished Israeli violinist Miri Ben-Ari to provide an unexpected coda to the track. Proving that he not only has an ear for music but also an eye for talent, "One Last Chance" is a soul ballad with Clef on acoustic guitar dueting with velvet-voiced Claudette Ortiz of City High. "Daddy" is one of the saddest songs you're ever likely to hear--reminiscent of 2Pac's classic "Dear Mama"--a rap that Clef dedicates to his recently departed father. "What A Night" remakes Frankie Valli's 1976 disco hit into a soul/hip-hop blend where Clef tells a little of his amazing life story and details his many accomplishments. On "Knockin' On Heaven's Door," Wyclef reworks the Bob Dylan classic, in Clef's version the lyrics are transformed into a lament on unnecessary death occurring in the ghetto and thro

Masquerade is the kind of album that only Wyclef Jean could make--from rock to rap to soul to reggae, Clef is a living embodiment of the different styles and genres that comprise contemporary popular music. Producer, arranger, composer, musician, rapper, singer, and showman--Clef is that rare artist who not only does all these things, but does them incredibly well. There's only one Wyclef Jean and Masquerade secures his place as one of the most versatile, talented, and accomplished musical artists we've got.

No upcoming events with Wyclef Jean