Best The Wanted Songs of All Time – Top 10 Tracks 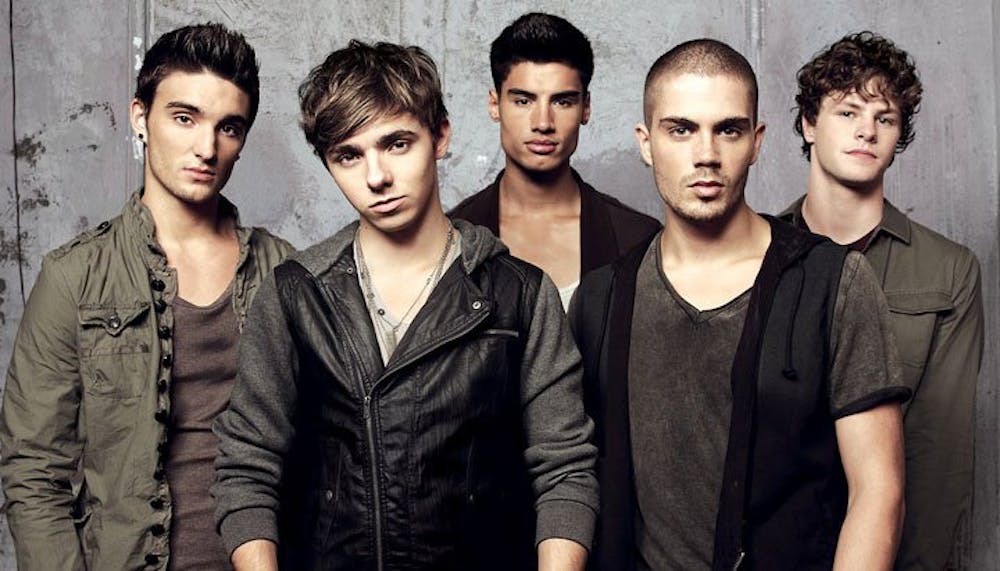 Follow The Wanted to get alerts about upcoming events and special deals!

THE WANTED The five boys that make up hot new pop proposition THE WANTED are on a mission to bring some much-needed cool – and a fair bit of sexy - back to boyband land. Though even tagging the five boisterous young men assembled today in a buzzing East London drinkery a ‘boyband’ seems a fair bit off the mark – maybe ‘lad-band’ might better suit.

Without further ado, here are The Wanted top 10 tracks of all time:

5. Could This Be Love

The five boys that make up hot new pop proposition THE WANTED are on a mission to bring some much-needed cool – and a fair bit of sexy - back to boyband land.

Though even tagging the five boisterous young men assembled today in a buzzing East London drinkery a ‘boyband’ seems a fair bit off the mark – maybe ‘lad-band’ might better suit. These guys are a million miles away from the ‘stand-up-for-the-key-change’ school of dewy-eyed balladry and cheesy co-ordinated outfits usually associated with the term.

There’s a palpable rough and tumble energy and down to earth laddiness to the fivesome when they’re together that makes it abundantly clear they’re not just band mates on the verge of pop greatness, they’re great mates. “We’re just five ordinary guys who like having a laugh,” says baby-faced 16 year old Nathan, the youngest in the band. “We’re all very different personalities and come from all over the UK, but somehow it works.”

Manc ex-footie ace (and future heart throb) Max, returns from the bar and begins summing up the characters that make up THE WANTED. “Siva’s pretty laidback and really zen, Jay’s a bit of an indie-kid and then Nathan - you think he’s all young and cute but actually he’s really dead dry and sarcastic,” he interjects, before adding with a grin, ‘oh yeah, and Tom – he’s just a lad from Bolton.”

For the past few months they have been living together in a ramshackle bachelor’s pad in Wandsworth, South London. Tellingly they invested in the important stuff like a football table before moving onto boring things like furniture and curtains. “Got a dart board on the door, fridge full of beer, freezer full of pizzas. What more do you need?’ explains Tom in his thick Bolton accent.

Pizza and beer aside, the band have been busy honing their edgy pop sound that incorporates elements of low-slung beats, anthemic rock dynamics and swelling modern pop melodiousness in a mix that is uniquely THE WANTED.

“I’d say it was edgy pop, but there’s a bit of rock and a bit of indie in there too,” says Jay. “It’s taking a bit of risk I think, it’s certainly not your usual boyband stuff.”

The band have been busy the past twelve months travelling to Europe to co-write and record with some of the biggest names in pop. From Danish pop maestro Cutfather (Christina Aguilera, Pixie Lott, Santana) in Copenhagen and Rami & Carl Falk (‘N Sync, Britney Spears) in Sweden. And back in the UK they worked with hitmakers including Steve Mac (Kelly Clarkson) and Guy Chambers (Robbie Williams, James Blunt) to perfect their state of the art modern sound.

“I’m a huge fan of ALL TIME LOW,” says Max of the band’s anthemic first single written by Steve Mac & Wayne Hector. “That songs really nails what we’re about as a band. I love the way it just starts with a vocal and a few strings, and then it just builds and builds to this massive sound.”

“Working with someone like Guy was pretty daunting at first, he’s a bit of legend isn’t he?’ says Siva of the band’s work with Mr Chambers. “I nearly pooed my pants” adds Nathan helpfully. It was with Chambers that the guys recorded the brilliant LET’S GET UGLY, which takes in a classic Ennio Morricone spaghetti western sample and mixes it up with the swagger of a young Robbie Williams and a dirty baseline to create a totally unique slice of modern pop.

“I love that track – that’s actually where we got the name THE WANTED from. Nathan came up with it,” says Tom. “It came out of the whole wild west vibe of that song, and just sounds cool, not too cheesy,” adds Nathan. “We’ve got no time for cheese around here.”

He’d kill you for saying it, but you could call fresh-faced 19 year old, scruffy-haired Jay McGuiness, the Billy Elliot of the band. “Oh man, don’t say that! No way,” he laughs. But we will because it’s true. Growing up in Nottingham in a ‘football crazy’ household – including his three brothers, sister and even his mum who captained her local team – Jay was a bit of the odd one out. “I was just so bad at it! They used to call me ‘banana kick’ cause I just couldn’t manage a straight line,” he laughs. “I used sit at home eating crisps and watching telly while they were all out at footie.”

Everything changed when Jay discovered dance classes – by chance when he tagged along with his mum at the age of 13. “It was the only thing I was ever good at. I really got obsessed with it.” Fast-forward a few years, and with proper training at Midlands dance academy MADD (“Yeah, it really is called that. And no, it’s nothing like Glee”) Jay was ready to embark on the gruelling audition circuit. “Thing is I’m not like the other dancers – they’re were all into R&B and I’m into indie and Jack Penate, Cat Stevens, stuff like that,” admits Jay – who finally bit the bullet for a singing audition for THE WANTED. “That’s why I’m glad I found the other lads. It’s like I finally make sense now.”

For the self-defined ‘quiet one’ of the band 16 year old Nathan Sykes can’t half talk. “I might be the youngest, but I’m a bit of an old man really,” he begins. “I just sit in the corner with me cup of tea and take it all in,” he says before rattling off a series of dry observations of his band mates and their antics.

Obsessed with music as a kid, Nathan starting playing piano when he was 7. “I’ve got to say I was absolutely shocking. My little sister was much better,” he says with typical self-deprecating humour. But don’t let that fool you, as a 12 year old his nascent talents won him a coveted place at Sylvia Young’s, where Nathan would regularly travel three hours each way from Gloucester to attend. “They used to think here comes the nutter that gets up at 5 every morning.”

Currently juggling A-Level college work and band commitments, Nathan is most looking forward to the band’s forthcoming club tour. “Can’t wait. Forget the performing, just being allowed in a club will be brilliant.”

With his chiselled jaw and cheekbones and dark good looks, not to mention a poise and confidence beyond his years, 21 year old Siva Kaneswaran was always a popstar-in-waiting. “Maybe I get the confidence coming from such a big family, we’re all very supportive of each other,” says  half Sri-Lankan and half Irish, Siva, referring to his seven brothers and sisters in what sounds a little like the Dublin-branch of the Jacksons. “I think that gives you an inner confidence.”

With his oldest sisters Hazel almost making it into Girls Aloud and Gayle becoming a top model in his homeland, Siva had all the encouragement he needed to go into the industry when he hit his teens. Together with his identical twin brother Kumar (“well we’re not totally identical”) the pair’s striking looks were soon turning heads, first as models then as actors.

“But music’s always been where I’ve really wanted to go,” enthuses Siva. “I’ve been writing songs with my older brother Trevor – that’s another one – for years.”

It would be easy to label Bolton lad Tom Parker the joker in THE WANTED pack, but when it comes to his guitar he’s dead serious.

“My guitar pretty much changed my life,” says the husky-voiced 21 year old. “I was never really into music before I picked it up when I was sixteen. Now it’s like my best friend, wherever I am I just pick it up and start playing.”

And while picking out the chords to his favourite tunes, Tom made another discovery - his voice. “People like Stereophonics and Liam Gallagher had a big influence on me. I’ve got a really throaty, rock voice, I’m glad I never had any singing lessons, they try to teach you a certain way. I just kinda taught myself.” Before long Tom became dead set that performing was his future.

Five minutes in his company and it’s pretty obvious why Tom’s fearless energy and devil-may-care charm make him the life and soul of the party. “Well, I’d say that was me and Max,” Tom corrects. “We’ll pretty much leather it at any party going. But all the lads know how to have a laugh - maybe Nath’s not reached that crazy part of his life yet, but we’ll bring it out in him soon enough!”

In another life things for 21 year-old Max George could have been very different. A football nut since he was old enough to kick a ball (he still goes to the pub every Friday to talk Man City with his dad and granddad) he had his heart set on a pro football career. That all changed when he was sixteen. “Yeah I snapped my hip flexer – the muscle that joins your groin to your hip,” he recalls with a face destined for a thousand bedroom walls. “That pretty much ended my football career.”

It didn’t take long for Max to pick himself up and settle on a new challenge – pop. With his boyish good looks, natural singing ability and effortless charisma it wasn’t long before he was being head-hunted to join boyband Avenue. A year in which he embarked on a crash-course in the harsh realities of the music industry. “It was good, I learnt a lot, that’s how I look at it,” he says. “What us five lads have is a whole other level.”

Being one of the older members of THE WANTED, the others tend to look up to him as something of a big brother.“Well, I guess so. In the sense that if there’s ever a problem the blame gets put on me and I always take the bollocking for the team,” he laughs. “That and the fact that everyone always hangs out in my room because I’m the only one with Sky.”

No upcoming events with The Wanted