Best The Donnas Songs of All Time – Top 10 Tracks 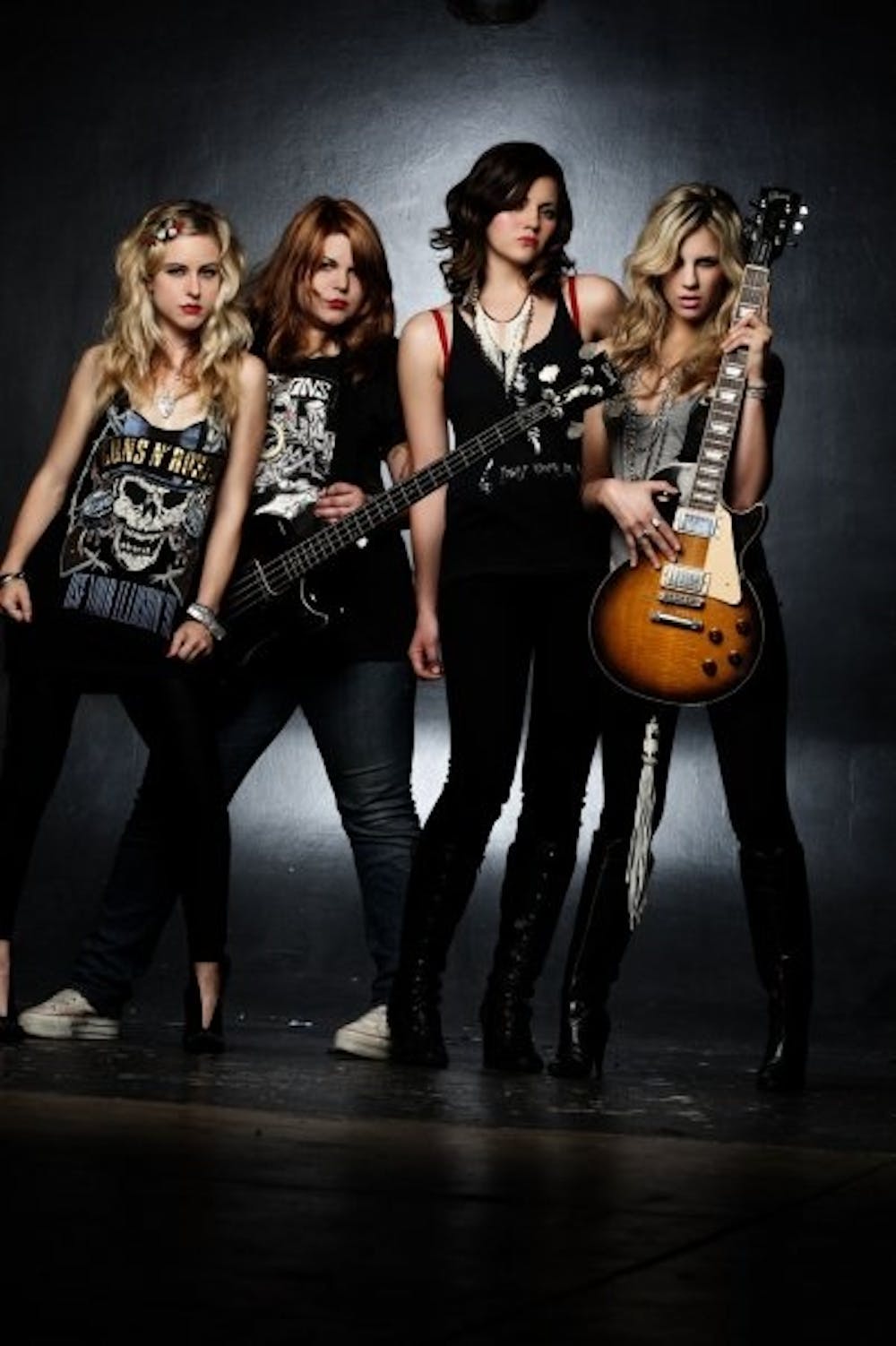 Follow The Donnas to get alerts about upcoming events and special deals!

During The Donnas’ last tour through North America, one of their most memorable shows ended with one of them face down on the hood of a cop car, arms behind her back, handcuffs cutting off the circulation to her clenched fists.

Without further ado, here are The Donnas top 10 tracks of all time:

2. Dancing with Myself - Single Version

4. Too Bad About Your Girl

During The Donnas’ last tour through North America, one of their most memorable shows ended with one of them face down on the hood of a cop car, arms behind her back, handcuffs cutting off the circulation to her clenched fists. Her crime? Drinking whiskey in the streets of Canada.

Yes, The Donnas are for real and they are here to stay. They are survivors in an industry known more for its comet casualties than career success stories. They are successful, smart, savvy, and sexy. They are the American Rock n’ Roll Machine.

The legend begins in a Palo Alto junior high school in Northern California where four self-described “dorky pre-teen girls” form a rock n’ roll band at the age of 13 in 1993. Over the course of the next 14 years, six critically acclaimed albums are released and The Donnas tour the planet several times over to an ever-expanding, international fanbase of “Donnaholics”. From Palo Alto to the stages of Letterman and SNL and the pages of Rolling Stone and Billboard, The Donnas have grown to become one of the best female rock groups of all time.

The band has always attracted an almost ridiculously wide spectrum of fans who would otherwise never be seen together in the same room. Where else than at a Donnas show would you see fans rubbing shoulders together in the front row wearing t-shirts from such diametrically opposed bands as Motley Crue, the Mr. T Experience, and Maroon 5? Some even make parole in time for the gig and bring special souvenirs from the Big House. No joke—in Oklahoma City, a paroled Donnaholic ex-con showed up with four Oklahoma State license plates he made “when the guards weren’t lookin” and each imprinted with a band member’s name.

So who are The Donnas in 2007? The players remain the same—Brett Anderson on lead vocals, Maya Ford on bass, Allison Robertson on guitar and Torry Castellano on drums-a testament to the girls’ talent and dedication. But there is a vast divide between the awkward tweens of the 1990s and The Donnas of the 2000s. Besides utterly poker-hot musicianship (and way better hair), The Donnas have entered into a new chapter of maturity and comfort in their career.

“The big difference between then and now is that we are not afraid,” states Robertson, one of the best rock guitarists, female, male or otherwise, playing today. “We know what we want, we know how to get it, and we are ready and willing to take it. It’s almost like we have come full circle. Maybe in some way we are still the same dorky pre-teens who started playing because we love rock n’ roll. The difference is that now we are completely comfortable and confident with who we are.”

Throughout the ups and downs of rock n’ roll’s daily rations, the ladies stay true to who they are every spike-heeled step of the way. The Donnas are a four-way, equal partnership of women in friendship, art and business. There is a deep and rare trust that exists between the members that most bands could never dream of achieving in a similar group dynamic. That is why most bands break up and The Donnas continue to stick together.

“I think that’s our secret to surviving in the industry this long,” says Robertson. “We’re really close. We can read each other’s minds and order for each other at dinner. We also truly respect one another.” “We always stick to our guns as a band and as friends,” adds Castellano, the group’s hurricane-force drummer (and whip-smart business woman who has corrected many a promoter’s math). “We remember who we are. We don’t want to be anything but ourselves at the end of the day.”

As for their sound, “We’ve always felt somewhat sceneless,” says Castellano. “But these days, when we go to a metal show I feel like ‘these are our people!’ That’s where I really feel the connection-Motley Crue, Cinderella, Aerosmith, Def Leppard-that’s where I want our band to be.”

This brings us to the aural thunderclap that is Bitchin’, The Donnas’ brand new record, an unapologetically anthemic hard rock album. Their much-improved luscious locks must have been a four-way blur of headbanging fury at this recording session. Thirty shout-along, swaggering rockers were slimmed down to an album-length fourteen tunes, all co-produced with Jay Ruston (The Polyphonic Spree, Meat Loaf).

Anderson, The Donnas’ power-house lead singer, explains, “The making of our new record was a wild and educational ride. We wanted to reach more people with this album and that inspired us to really challenge ourselves in the studio. We learned a lot about songwriting in the process and had time for once to experiment and develop our sound, which combines everything we know and love from our previous records with a new life and ravenous energy, a feeling that is summed up in the title.”

Bitchin’, a refreshingly loud, unbridled album, was even somewhat of a cathartic process for Ford, The Donnas’ furious femme fatale of the four string. “Writing this record made me realize that I could get something good out of even the worst relationship. I ditched the guy and we got the songs. I’m stronger than I was yesterday because of it.”

With that said, the track “What Do I Have to Do” takes a peek into the band’s more vulnerable side through lyrics that tell the tale of a relationship gone rotten. “I’m being way too nice/and you’re as cold as ice,” is heard, as well as, “What do I have to do to make you want me?”

Feelings range from boyfriend tension to girl fight anger to party time enthusiasm on Bitchin’. “Girl Talk” is reminiscent of earlier Donnas tracks with lyrics that bring to mind the image of a high school hallway cat fight with a heated Anderson shouting, “Up & down the halls/writing on the walls… Stop talking about me…” and, “Think you’re jealous much/all up in my business/girl I’ve had enough/you better start running.” Then there is “Don’t Wait Up for Me,” a Def Leppard-esque metal anthem that chants, “Loosen up/drain the cup,” and brings together clapping hands and stadium crowd cheering with pounding drums and a roaring guitar solo.

Bitchin’ significantly marks The Donnas’ return to complete career independence. Bitchin’ will be released on September 18, 2007 on The Donnas’ very own Purple Feather Records (available through Redeye Distribution). The band has parted ways with Atlantic Records (which released The Donnas’ last two albums, Gold Medal and the hugely successful Spend The Night) to create their own record company.

“There is just not enough accountability in the music industry anymore,” says Anderson.

Robertson agrees, “We formed our own label because we could. That’s the beauty of it. Our whole career has been ‘The Donnas’ and ‘the label’. It makes sense to us to keep doing what we want to do and cut the crap.”

The Donnas: a band of power-on stage and off.

When they come back to rock Canada, the whiskey is on me.

No upcoming events with The Donnas