Best The Crystal Method Songs of All Time – Top 10 Tracks 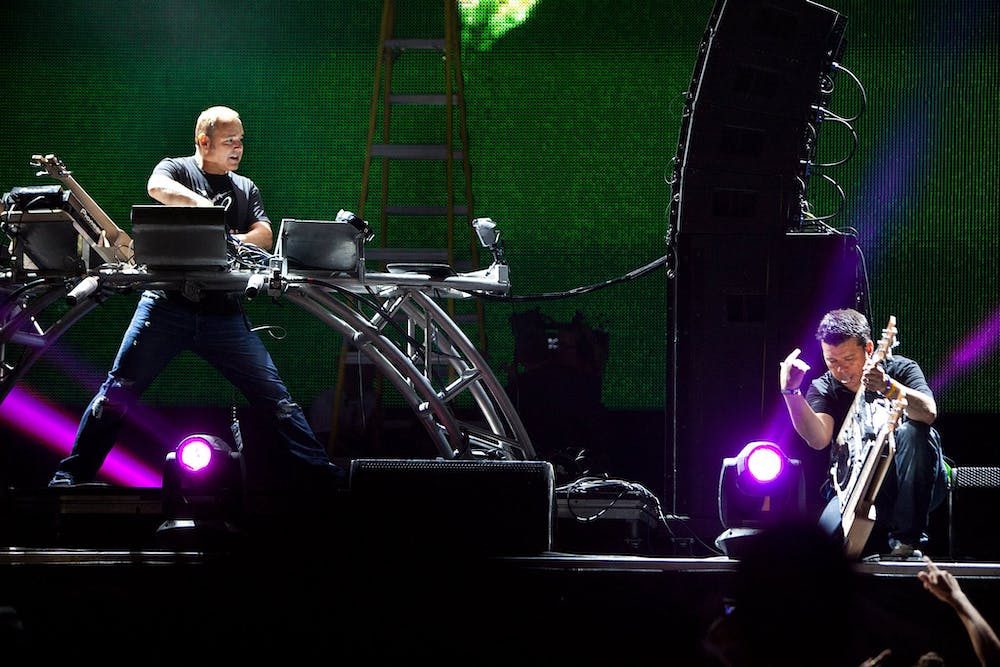 Follow The Crystal Method to get alerts about upcoming events and special deals!

For too long, electronic dance music has been the domain of studio-oriented British artists schooled in Detroit techno and Chicago house.

The Crystal Method has performed in venues such as: The Ritz Ybor, Audio Discotech, The Metropolitan, Sound Bar, Spire, Great Northern, Nectar Lounge, It'll Do, Serj, The Midway

Without further ado, here are The Crystal Method top 10 tracks of all time:

The Crystal Method, The Heavy

For too long, electronic dance music has been the domain of studio-oriented British artists schooled in Detroit techno and Chicago house. American originals The Crystal Method are helping change that with their bristling brand of electronica - played live as well as on record - which stems from a love of rock, hip-hop, electronic and soul. The Crystal Method's Ken Jordan and Scott Kirkland helped re-establish America's place on the dance music map with the acclaimed 1994 City of Angels single "Now Is the Time," which married samples and sound bites with pulsing breakbeats and electronically generated hooks.

Several singles, compilation tracks and remixes later, The Crystal Method started recording songs for Vegas (Outpost Recordings), their debut album, released Aug. 26, 1997. The two first worked together as DJs in their hometown of Las Vegas, but it was a move to Los Angeles that precipitated the band's surge to the forefront of America's burgeoning electronic dance movement. After "Now Is the Time" made them an underground sensation, The Crystal Method were asked to open an L.A. show for England's up-and-coming Chemical Brothers (then still operating under the already-in-use Dust Brothers moniker) in January 1995. "I was scared to death because I'd never been in a band or anything. I was visibly shaking," Jordan says of his first live experience. "But several beers later, we calmed down a little, and it was great.

Even though it was our first show, we totally tried to decide what kind of live act we'd be - whether we'd just bring our studio on stage or if we'd do it more as a performance. So we pretty much went the performance route, and we ended up having an excellent crowd response." The Crystal Method have since balanced their time precariously between the studio and clubs. Besides sculpting distinctive songs and remixing tracks for Moby, Black Grape, Keoki and Zen Cowboys, among others, the duo has set dance floors ablaze spinning discs from Toronto to Florida and from Seattle to San Diego.

That's not to say bands who don't write or record music that way are doing anything wrong, but this is the way we approach things. There are similarities between us and AC/DC, too, you know?" According to Kirkland, growing up amid the flash floods of popular music genres in the 1970s and '80s helped shape The Crystal Method's blend of everything from soulful grooves to rock flourishes to bouncy trip-hop to quaking drum and bass. "My parents were young when they had me - my mother was 15," he explains, "so I was raised with my mom listening to disco and my dad listening to Pink Floyd and Led Zeppelin.

Then I got into heavy metal and then Depeche Mode." Jordan cuts in: "Zeppelin and Stevie Wonder influenced us more than Aphex Twin." Their eclectic background is exhibited on Vegas in standout cuts like "Keep Hope Alive." Originally released as the duo's second single for L.A.'s independent City of Angels label, the song features a sample of Jesse Jackson's rousing speech at the 1992 Democratic National Convention, spliced, diced and mixed in with careening sonic washes and a breakbeat that's got more kick than an outraged mule on amphetamines.

Speaking of drugs, don't jump to any conclusions about the band's name based on Vegas tracks like "Trip Like I Do," "Vapor Trail" and "She's My Pusher." The name actually derives from a woman named Crystal whom Jordan and Kirkland simultaneously had a crush on. "A friend of ours, a rapper, heard about our little dilemma and blurted out, 'Ah, the Crystal Method.' We just liked the way it sounded," Kirkland explains. The duo does, however, have something of a clandestine lab rigged up in the two-car garage on the property of the house they share in Glendale, Calif., but it's not for manufacturing illicit substances.

The Crystal Method records, produces and mixes music created on keyboards, sequencers and samplers at this facility, dubbed the Bomb Shelter because of a relic in the front lawn left over from the Cuban Missile Crisis. "Our studio looks like some science fiction control room," Kirkland says. "It's a weird little capsule we've created where we sit in our chairs with wheels and bounce from synth to synth and pull out all these old effects pedals when we're inspired." Jordan adds: "We've soundproofed it pretty well, and we have the 210 freeway in our backyard, so that provides cover." Kirkland agrees: "It works out really well because we could be up late working on a big, beefy track, and you could walk outside and not even know anything is going on. It's a very suburban, family-oriented neighborhood; you go out in the morning and kids are playing and neighbors are walking their dogs.

It kind of brings us back to reality." The music reverberating off those soundproofed walls eventually made it to tape and then into the hands of Justin King, a DJ from Great Britain, who was looking to start a label that would showcase American electronic dance acts. He teamed with Scottish transplant Steven Melrose to form City of Angels. "Now Is the Time" was the label's debut single.

It was also the first salvo in a barrage of high-energy, techno-laced tracks that came to include a remix of "Now Is the Time" by Secret Knowledge, whose Kris Needs spruced it up with bludgeoned samples of Mot鰎head. Outpost Recordings executives soon took note of City of Angels' inventive roster, which also includes San Francisco's Mephisto Odyssey, San Diego's Chop Shop, L.A.'s Uberzone and others, and formed an alliance with the label in February 1997.

According to Outpost, a representative Jon Sidel, who signed The Crystal Method, Outpost initially became interested in the band in September 1996, months before major magazines started proclaiming electronica the "next big thing." "The sound these guys made was different," attests Sidel. "I listened to every electronic band out there, and I compared each one to The Crystal Method. Ken and Scott had more of a sense of songcraft, and they are the best at recording and writing these types of records." Vegas bears this out.

With infectious, propulsive beats perfect for dancing, thoughtful, sultry melodies suited for home listening, and vocal snippets that add humor, spirit and sometimes political insight, The Crystal Method offers America a first-rate electronic dance band of its own - even if some persist in equating Jordan and Kirkland with their contemporaries across the Atlantic. "We don't compare ourselves to what the European electronic groups are doing," Jordan allows. "If they move ahead in making America a little more receptive to different genres of music, and if they can help make people not so afraid to dance, that's great. But we're not counting on them to pave the way, and I'm sure they're not counting on us either."

"We're so disconnected from them," Kirkland affirms. "We love music, so we pay attention to what's happening in Europe because there's some really great music coming from there. But it's a whole separate thing from us as far as the creative side of it. We just go into the studio and make music that's right for The Crystal Method, and if anyone else digs it - cool!"