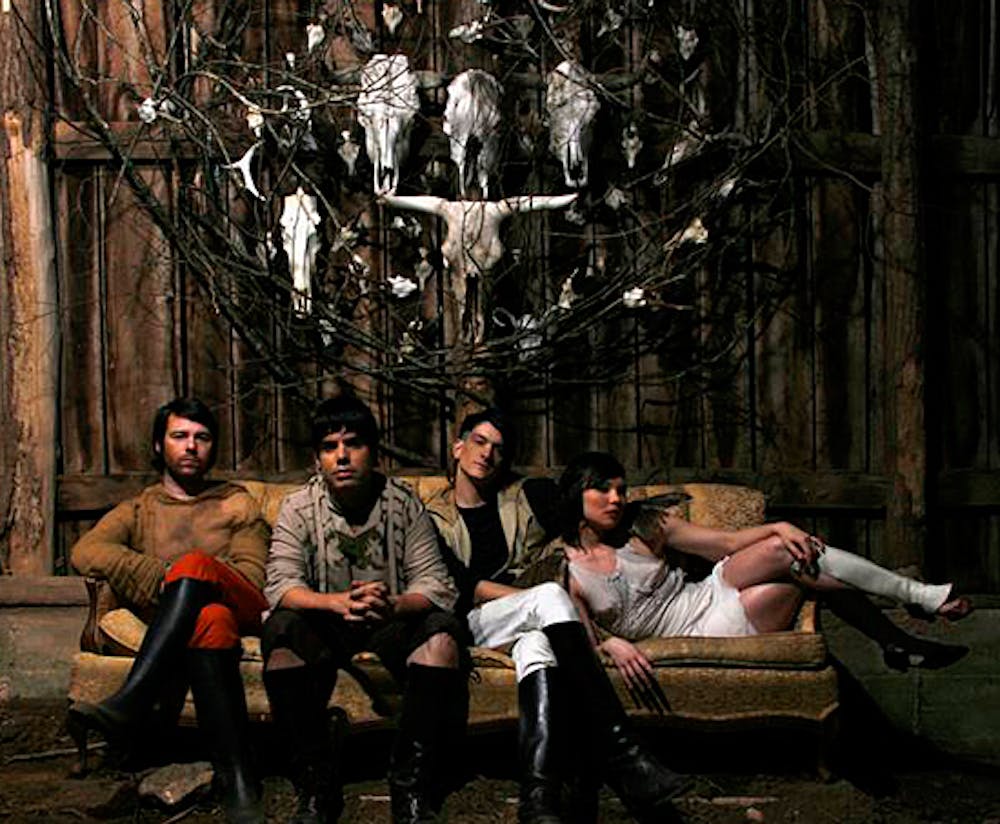 Follow Shiny Toy Guns to get alerts about upcoming events and special deals!

Without further ado, here are Shiny Toy Guns top 10 tracks of all time:

Embracing every neutral genre of music, Shiny Toy Guns create enveloping, inviting soundscapes best described as future-forward rock. While they manipulate the latest technology with ease, theirs is not a quest to be hipper…Shiny Toy Guns are far more driven by the need to open doors and create new songs and sound that resonate through their listener’s minds long after the latest trends in music have faded away.

“When we approach the aspect of an already realized song that we have written with simple acoustics and notepads, we then choose to utilize technology to make new sounds with the equipment that exists today instead of relying on instruments or technology of previous decades of music. Progression is key. And the year is now upon 2007.” says Keyboardist Jeremy Dawson.

The band’s debut full-length We Are Pilots was created solely within the traditional elements of classic songwriting. Unforgettable vocal melodies abound, anchoring an emotional display that ranges from yearning sorrow to cool disdain.

Touchpoints along the way bring the listener to a band on the run: you can feel the impact of the stories of thousands of people that they come in contact with them along the way instead of being reminded of a particular artist or genre. Shiny Toy Guns transcend their influences, composing something impossible to describe and even harder to ignore.

With the album, Shiny Toy Guns are off to a blazing start. The opening track, You Are the One, starts with gothic organs, haunting samples and a steady drum machine before blossoming into a subdued rock riff and climaxing with synthetic strings and a glorious pop chorus. The lusty Le Disko contains a half-spoken, half sung vocal by Carah Faye, surging guitars and disorienting electronic noises. When They Came For Us is dark and deep -- a lead-weighted swimmer sinking in a sea of rubbery basslines, melancholy guitars and regret-drenched vocals.
Shiny Toy Guns mapped out the topography of We Are Pilots for years before they started recording it, but their perfectionism and the advancement of technology made the album a huge challenge to create. “It was a ridiculous amount of work,” says Dawson. “We wrote the songs, and we would make our own demo, print 1,000 CDs, then get a new piece of gear or learn to use our equipment the correct way and suddenly be re-excited all over again. So we would re-record the whole album all over again. We did that four times.”

Exhaustive determination has always been a part of Shiny Toy Guns’ work ethic, and long before the formation of the group in 2003 Dawson and childhood best friend vocalist/guitarist Chad Petree had been steadfastly writing and producing songs and music; also learning the aspect of marketing and promotion…pivoting themselves and others via nightclubs, festivals and rock venues across the southern part of the United States.

“We lived in this tiny town called Shawnee, Oklahoma which only had 20,000 people in it.” Says Petree. “We had no bills or agenda whatsoever… so we’d sit in our bedroom, listen to Pink Floyd, Vangelis and William Orbit and write music all day and all night without distraction.”

Their mission to create the perfect song became all-consuming. Days and weeks were spent analyzing other artists, studying the lyrics and the melodies of the history makers of the music world to draw the most direct inspiration possible. “We knew from the start the things that draw people magnetically and keep them there for decades were the melody and the lyrics,” Petree says. “It’s not just about rhythm or a show of emotion, like aggression, fear or sadness.”

In the mid ‘90s, Dawson dove into the world of electronica and began deejaying across the United States. At the same time, Petree continued forward writing and playing in various bands abroad; and for a couple years the two went their separate ways. However, both were dissatisfied by what they were doing individually, so they decided to combine their strengths again, and in 1999 they left Oklahoma and moved to Los Angeles. Six months later, they formed the electronica group Slyder. They landed several dance floor hits, including scoring the majority of the music for Sony Playstation’s record-breaking Grand Theft Auto III.

“We were head-on in the middle of dance culture and trance was god,” Dawson says. “But that didn’t work out because we weren’t happy at all. There were lots of drugs, lots of dancing and a lot of repetitive arrangements and samples, but there weren’t so many songs. Its amazing and fun to compose music for having a good time, but we yearned to get back into a room together and write songs that move your face, things that change the way you ever thought about anything.”

Slyder evaporated, and the two of them took a year to clinically and academically evaluate what they had done in career, both right and wrong, and where they still wanted to go. Then in a whirlwind year of change in the underground community of Los Angeles a visionary DJ and producer named Tommie Sunshine from New York City invited the two of them to a packed-to-the-walls dark pub in Echo Park…and 4 months and a demo later Shiny Toy Guns in theory was born.

“The name comes from the lyrics for When They Came for Us,” Petree explains. “It’s an analogy about how someone can have a weapon without even knowing it’s a weapon. About how people don’t really know how important something or someone can be until everything is gone.”

With songs written and a global vision in line, Shiny Toy Guns started looking for the missing members. Through a close friend Jeremy was introduced to an 18 year old from the Los Angeles hardcore scene named Carah Faye Charnow.
“She was born to sing and perform.” Dawson says. “It was the element that we wanted. With Carah we now had the ability to speak to people through lyrical conversation between a boy and a girl. Exactly what we wanted.”

Drummer Mikey Martin also seemed to surface out of nowhere. Martin had played with various pop-punk and post-hardcore bands in his hometown of Simi Valley, California. Through relationships developed around friends of the group Mikey became close to the three…and soon the final piece of the four Shiny Toy Guns.
The band began the final recording of We Are Pilots in January 2006. They tracked digitally in Los Angeles and recorded the analog passages in New York. Then they mixed with Mark Saunders, legendary for his work with the Cure, David Byrne, Erasure and others. With the album complete, newly acquired manager Jim Welch pivoted a multi-major label bidding war landing the band a June deal with Universal/Motown in the U.S. and separately with Mercury in England. “We had a decade of a learning curve with lots of trial and error, passing points and bridges that were important in our development,” says Dawson. “Now we are armed with record company resources. But we have scars and bullet holes that have built us up with integrity and experience. Mistakes and an unawareness of who or where we really are have already become a part of our past years ago…now we can push forward in humbleness and focus on momentum.”

Part of the integrity of Shiny Toy Guns involves their desire to establish a community in which other musicians can learn from their accomplishments. In the immediate future the band’s web site will include music tutorials, song arrangement workshops and an area where visitors can make their own songs using elements of Shiny Toy Guns’ songs and elements of music composed themselves.

“A lot of kids want to make music, but they’re in high school and they don’t have thousands of dollars to buy what is said to be the right equipment.” begins Petree. “So we’ve created this whole communal thing to help people become better songwriters and lyricists. You can take our songs or your own ideas and merge them and rework them into different versions. You can internally dissect them and see how the lyrics came about and why a certain part works a certain way.”

Shiny Toy Guns believe in the communal aspects of great music. If it was the ‘60s, they’d no doubt be living in San Francisco. But today, instead of squatting in some dirty rundown building, they’re united with their like-minded peers and fans via the Internet. They started posting on Myspace.com in 2004 and were one of the first bands to build up a loyal Web following. “Zeros and Ones are a nuclear weapon for a band.” says Dawson. “You could use it and no one can slow you down or tell you what to do.”

Since then, Shiny Toy Guns’ popularity has snowballed. On the band’s Myspace page, Le Disko via its multiple faces has been played well over 1,000,000 times and the song is rampantly driving radio play nationwide. Los Angeles mega-station KROQ 106.7 sent the song straight to #1 most requested; well before any labels were on paper. And the rest of We are Pilots are equally strong. Chemistry of a Car Crash is a perfect blend of rock and electronics that incorporates desolate vocals, crafty guitars, churning riffs and warbling keyboards into a plea for romantic fulfillment. Rainy Monday is sparkling, splendorous pop drenched with melancholy vocals and Shaken starts in a soft, eerie haze, then bursts into a multi-textured rumination fueled with both desperation and contrition.

“There’s a lot of contrast in what we do,” Dawson says. “But this is simply an important part of expressing what it’s like to be human. We want to find a new color to paint with .. and use it to make amazing pictures :) Because when music history is written, we don’t want to be a footnote, we want to be an entire chapter.”