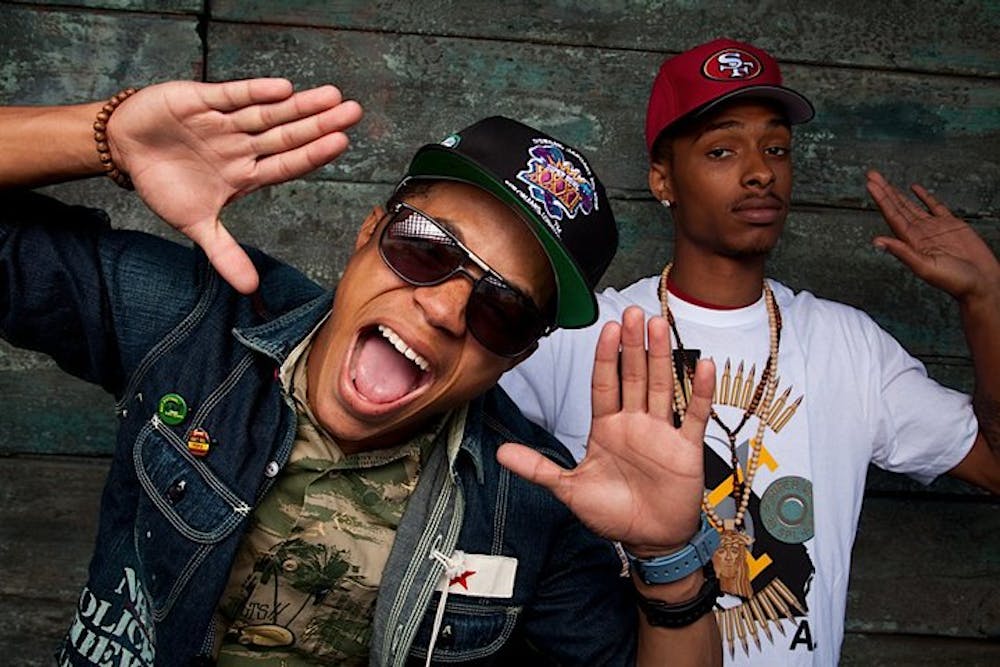 Follow New Boyz to get alerts about upcoming events and special deals!

Last year, The New Boyz taught the world how to jerk.

Without further ado, here are New Boyz top 10 tracks of all time:

4. Better with the Lights Off (feat. Chris Brown)

Last year, The New Boyz taught the world how to jerk. What was once a minor Southern California trend went international when Ben J and Legacy created “You’re A Jerk,” the song that did for jerkin’ what Chubby Checker did for the “Twist.” From the Fox Hills Mall to Paris, France, teenagers in skinny jeans and tropically-colored t-shirts began filming videos of themselves jerkin’: a dance craze that combined the best of break-dancing, krumping, and the Running Man.

The New Boyz were the face of the movement, next-generation avatars of style, skills and swag. Boasting an unforgettable video that racked up over 60,000,000 views on YouTube and other video-on-demand platforms, the pair were the focal point of articles in the LA Times, LA Weekly, The New York Times and Vogue Japan. The group also became one of the biggest selling hip-hop groups ever at the popular retail chain, Hot Topic.

It was an incredible feat for two 17-year olds, particularly considering they had only been making music for a year. While their success engendered its share of haters, the doubts were instantly quelled upon the release of their debut album, Skinny Jeanz & A Mic. A critical and commercial success, the LA Times praised Ben J and Legacy’s innate “catchiness and charisma,” while XXL magazine hailed the Boyz as “the breath of fresh air that rap needs.”

While the world may have initially known them as jerks, the group’s second smash single, the Ray J-aided slow jam, “Tie Me Down” went multi-platinum and was the groups second Top 5 record at rhythmic radio. Revealing their pop gifts and versatility, the collaboration still dominates radio even a year after its initial release. They were up for a BET Award for best group and even snagged a Teen Choice Award nomination. Subsequent tours with Chris Brown and Sean Kingston revealed the hysterical fervor of the group’s fan base. Several mall performances even worked the crowd into such a frenzy that law enforcement had to shut them down.

But it’s 2011, and rather than rest on their laurels, Ben J and Legacy are back with their sophomore album, Too Cool To Care, in stores now. The new album reflects the group’s continued evolution, as they harness different genres (electro, alternative rock, R&B) and blend them with their hip-hop roots and trademark wit and confidence. As they said from the start: New Boyz do new things.

“We still support the movement, but we wanted to show our creativity without being tied to jerkin’,” Legacy said. “Too Cool to Care is about how we’ve always gotten criticism from those who want to hate on our fashion or our style. But we’ve always done our thing. The album has crazy pop tracks, rock songs, and electronic songs. We’re testing our boundaries.”

“Break My Bank” combines the best of both worlds: fluid raps layered atop island crooner and labelmate Iyaz’s instantly memorable hook. The result is a summer jam that conjures palm trees, white sand beaches, fluorescent waters and pink drinks with umbrellas in them. An instant smash, in just two weeks the single was added to 50 radio station playlists and closed in on pace to be Asylum's fastest record to #1 on any airplay chart.

Their first single “Backseat” is their attempt to bridge all these influences. Produced by indie-dance duo The Cataracts and featuring their starlet Dev, the song marks the group’s foray into pop territory while keeping roots in hip-hop inspired fun. The “Escalade-based banger,” described by Entertainment Weekly on its rise up the charts, “is how dance parties start—and how babies accidentally get made.”

Elsewhere on the album, the group proves they can step away from the house-party functions and into a glitzy nightclub, concocting electro-club bangers like “Zonin.” But don’t be misled by the eclecticism. Even hardcore hip-hop heads, who view skinny jeans as the sign of the apocalypse, will be converted by the DJ Khalil-produced “Tough Kids” with its rapid-fire raps, raw boom-bap drums and Hendrix-style guitars.

Like most 18-year old males, the New Boyz have their minds heavily focused on the opposite sex. “Meet My Mom” finds them serenading a female over a churning pop-punk assault. Meanwhile “Your Boyfriend Is A Lame” finds Ben J and Legacy trading effortless boasts in the vein of a young LL Cool J.

“We wanted to show that we’ve grown up a little bit. It’s not something out of left field, but want to show the world that we’re the New Boyz and we always do new things,” said Ben J. “The first album was more jerkin’ oriented. It let the world know who we are. This album is focused on expressing ourselves to the girls. We’re always trying to get the ladies.”

Their first album made them voices of their generation, but their second explains exactly who the New Boyz are. They’re children of the iPod age, able to switch styles as easily as they switch their skinny jeans. The notions of traditional hip-hop mean nothing to them. They’re dedicated to pushing past genre and aesthetic boundaries. They’re perennially on the quest for the new. And if you don’t like it, that’s all good—they’re Too Cool To Care.

No upcoming events with New Boyz