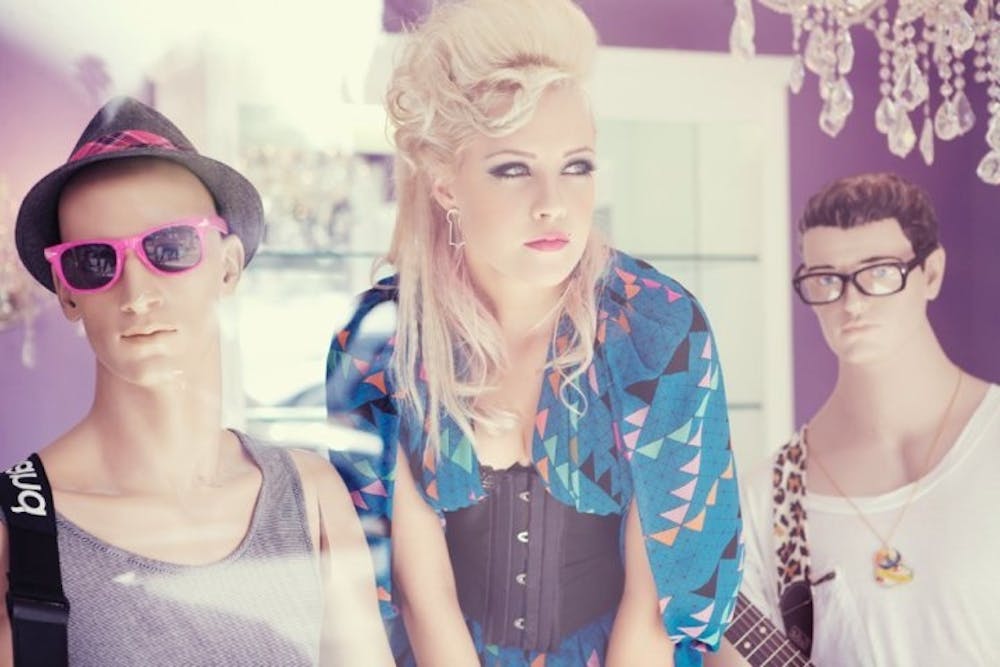 Follow Jessie And the Toy Boys to get alerts about upcoming events and special deals!

Upon introduction, her disarming smile and runway-ready blonde beauty might inspire you to quickly peg her as the latest addition to pop music's growing army of disco dolls.

Without further ado, here are Jessie And the Toy Boys top 1 tracks of all time:

Jessie And the Toy Boys Details

Upon introduction, her disarming smile and runway-ready blonde beauty might inspire you to quickly peg her as the latest addition to pop music's growing army of disco dolls. But you would be wrong. Jessie is far more than merely meets the eye. As the voice and creative mastermind behind Jessie and the Toy Boys, she reveals herself to be a clever, driven young woman on a mission.

&quot;I don't mind that people approach me with one attitude and leave with another,&quot; Jessie says. &quot;I like having the power to play with stereotypes... and then shatter them. It's fun and gratifying.&quot;

First and foremost, Jessie smashes preconceived notions by being the primary architect of her band's sound. This girl can write. Every note of every song is the result of a self-imposed musical boot-camp that saw the artist immerse -- and isolate -- herself in the European club underground.

&quot;I'd been in a band that left me feeling like I needed to break out of my comfort zone and gather new perspective and experience,&quot; she says. &quot;So, I went to the U.K., which is where a lot of important and trend-setting music is made. I went alone. I needed to live by my musical wits and instincts for a while, and see where it took me.&quot;

It was a brave move that tested Jessie's determination. &quot;I won't deny that those first few days were difficult,&quot; she recalls. &quot;It's challenging to be that far from the places and people who feel familiar and safe. I even contemplated giving up and going home at one point. But that feeling didn't last very long. The intention behind going abroad was to grow, and to learn more about who I am as a person and as an artist. You can't achieve that without a little pain, so I toughed it out.&quot;

The result of Jessie's determination is a sound that brings listeners to the next sonic dimension of electronic-rooted pop music. The first single, &quot;Push It&quot; (featuring a playful rap interlude by Yelawolf), combines an urgent club bassline with vibrant, sixties-spiked girl-group colors. Jessie's vocal, by turns, has sex-kitten and brash, rock-diva qualities.

&quot;A great song, to me, is one that sticks to your brain long after you've heard it for the first time,&quot; Jessie says. &quot;What I'm trying to accomplish is music that is catchy, but smart. Part of that is combining elements of different genres in ways that you might not imagine working together at first.&quot;

Jessie deftly succeeds in her creative mission with songs like the new-wave-spiced &quot;Valentine&quot; and the introspective, retro-soul-infused &quot;Long Way From Home.&quot; It is during these songs, in particular, that Jessie most effectively proves herself as a vessel for widely varied concepts, while also indicating a remarkable talent for genre interpretation.

It's been an intriguing journey up to this point for Jessie Malakouti. This enigmatic bombshell admits to starting her own rock band just to piss off her parents and then promptly left home at 16. Growing up in rough patches around Southern California’s Inland Empire added a dark tinge to her savvy pop outlook.

Going from friends’ sofas to audition to odd job and back again, Jessie would live off various paid acting/dance gigs as well as teaching at the local dance studio. She earned her stripes by fronting her rock band Shut Up Stella hitting the sweaty LA club scene and building a West Coast fan base.

Then things started to change. “I just wasn’t in the same head space anymore,” says Jessie, “they wanted to carry on making angry music and I was writing happy pop songs.”

From there, Jessie began to believe that she could navigate her own creative ship. &quot;When you have a vision for yourself, you have to take risks,&quot; she says. &quot;I'm completely comfortable with that, because I decided a while ago that I was going to live or die by my own sword. I’d rather people love me or hate me, nothing in between, thanks.”

Given what Jessie Malakouti has beneath the surface, there's little chance that her future is anything but bright. If there’s a boundary, Jessie is going to push it.

No upcoming events with Jessie And the Toy Boys