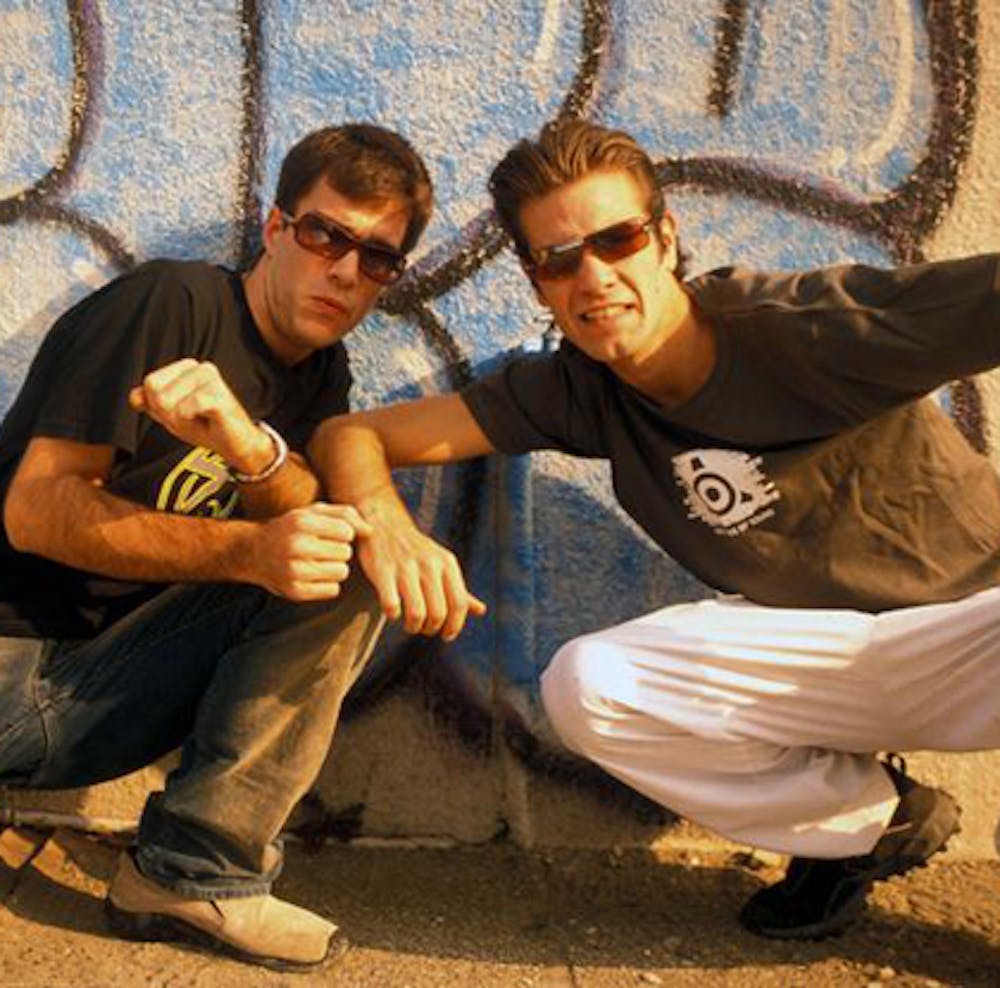 Follow Gms to get alerts about upcoming events and special deals!

Groundbreaking psychedelic trance group Growling Mad Scientists -- Riktam (Shajahan Matkin) and Bansi (Josef Quinteros, who is originally from Barcelona)--regularly tour the world and have sold over 300,000 cds on over 150 releases with 8 albums & 10 compilations under their belt.

Gms has performed in venues such as: Great Northern

Without further ado, here are Gms top 10 tracks of all time:

1. We are Psychedelic - GMS Remix

7. The World That You Know - GMS Remix

Groundbreaking psychedelic trance group Growling Mad Scientists -- Riktam (Shajahan Matkin) and Bansi (Josef Quinteros, who is originally from Barcelona)--regularly tour the world and have sold over 300,000 cds on over 150 releases with 8 albums & 10 compilations under their belt. Their music pushes and blurs sonic boundaries and has inspired both producers and punters alike, making G.M.S. one of the most in-demand live electronic acts in the world.

G.M.S. began when Riktam and Bansi met in high school at age 14 in Amsterdam. Both were passionate about electronic music, so the duo chose to leave school and seek their education in the club scene. "We really didn't find what we really liked to do in school," says Riktam. "We wanted to focus on music, so we started DJing. It just felt like the right thing to do for us."

Even though they were too young to legally enter a nightclub, Riktam and Bansi began spinning at clubs in Amsterdam. On most occasions, they had to be whisked into the building's side door to avoid scrutiny by the authorities. While in the DJ booth, they'd often receive double takes from clubbers who caught a glimpse of the two teenagers rocking the dance floor.

This was the early '90s and Amsterdam's club/rave scene was in its infancy, and genres like Gabber dominated the fledgling culture. Two years later, Riktam and Bansi traveled to Goa and experienced a musical epiphany. "This is where we got famous," smiles Riktam.

It was on this Indian paradise where the heady strains of Goa trance seeped into these 16-year-old's bodies and souls. In Goa, Riktam and Bansi DJ'ed at some of the wildest, most memorable parties of their young lives. The experience made an indelible mark on their psyche and subsequent gigs around Europe further enlightened their spirit.

"It was something new for everyone, basically," explains Riktam of the Goa trance influence that laid the bedrock for G.M.S.'s sound, which is packed with throbbing basslines, guitars, beats and vocals. "We were also attracted to the way that people had a good time at the parties and the way that they reacted. It was something very new for us, too."

When Riktam and Bansi returned to Amsterdam, one of their friends had purchased some recording equipment. Not only was their production career born, so was the name of the group. Says Riktam, "The name G.M.S. defines our music. I think Bansi came up with the name because one of the sounds on a synth was called a growler. We liked it, so it stuck."

After a few early singles, G.M.S. unveiled its acclaimed 1997 debut album, Chaos Laboratory ( Alien News Records) , which was recorded with former member Sebastian Claro, who left the group after a two-year stint. The album established G.M.S. as serious players in the psy-trance scene and only hinted of what was to come.

In 1997, Riktam and Bansi relocated to the sunny island of Ibiza, where an easygoing lifestyle and bucolic rural recording studio inspired1998's The Growly Family. "The island has been our best inspiration," affirms Riktam.

In 2000, Riktam and Bansi formed Spun Records with partner Seth Hoffman and released G.M.S. vs. Systembusters and 2002's The Hits and No Rules. 2003 saw the release of The Remixes --a star-studded remix album featuring the biggest names in trance, including Infected Mushroom and Hallucinogen.

Spun's purpose is twofold: to serve as a home for G.M.S.'s music and as forum to showcase promising psy-trance talent. "We were releasing records with a lot of labels for quite a few years," says Riktam. "We thought about how much money the label made and how much we made. It was wiser in the end to have a label of our own so that we can help ourselves and other artists and friends in the trance scene."

In between their relentless tour schedule that regularly finds G.M.S. performing in Europe, Asia and North America, Riktam and Bansi managed to complete their seventh and latest album, Emergency Broadcast System. All of the album's tracks have been fine-tuned at their revered live shows, and the full-length displays G.M.S. at the top of their game. "We've been working together for so long that we have our own way of working. We travel with two laptops, and we make music while we're on the road. We're always writing and playing out new ideas when we perform."

With their songs now almost omnipresent, even Hollywood took note of G.M.S. in 2004 by licensing G.M.S. tracks for Man On Fire starring Denzel Washington. And if you turn on any sports network almost anywhere in the world, chances are good that you'll hear one of G.M.S.'s tracks pumping in the background. And again in 2005 on another Tony Scott film called Dominoe.

Having graduated from playing small clubs to performing at mega-festivals like Dance Valley and The Boom and packing super-clubs line New York's Avalon & Ibizas Privilege, G.M.S. aren't ones to rest on their laurels. As their legion of followers grows, they're constantly refining their live show and pushing their music to the next level.

G.M.S. have been busy with many remixes in recent years including the classic track Sweet Dreams from Eurythmics, and for Japanese Rock legends ? Hide. And in recent times G.M.S. remixed We Want Your Soul from breakbeat master Adam Freeland for the upcoming double CD Spunout In Ibiza compiled & mixed by G.M.S. due for release in 2007 with Spun Records.

In 2006, a collaboration with the famous bass player T. Money Green (bass player on albums for Dr. Dre, 2Pac, Snoop Doggy Dog and more), their first track due on the upcoming Spunout In Ibiza double CD in 2007 with Spun Records.

"It took us quite a while to get where we are right now," says Riktam. "It entailed a lot of hard work and a lot of time in the studio. In the end, we're proof that hard work always pays off.

No upcoming events with Gms