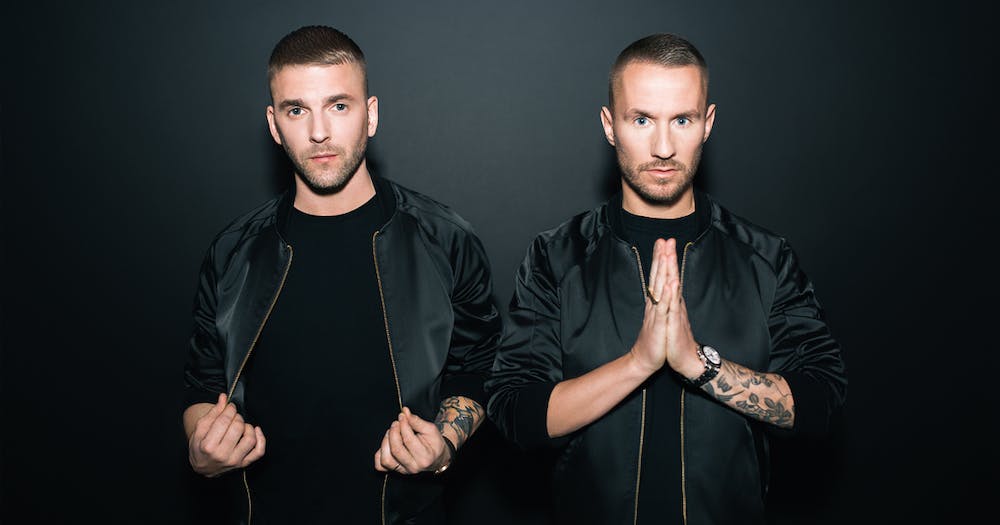 Follow Galantis to get alerts about upcoming events and special deals!

The lights begin to shimmer at Coachella’s Gobi Tent, as the curious crowd packs the stage to witness a never-­before­‐seen act, and something unexpected occurs: 10,000 people compelled to sing in unison.

Without further ado, here are Galantis top 10 tracks of all time:

The lights begin to shimmer at Coachella’s Gobi Tent, as the curious crowd packs the stage to witness a never-­before­‐seen act, and something unexpected occurs: 10,000 people compelled to sing in unison. It’s the result of a tangible feeling hanging in the air, that this is the birth of a movement; this is the birth of GALANTIS.

At its core, GALANTIS is two friends making music together. The fact that they’re Christian Karlsson, aka Bloodshy, and Linus Eklöw, aka Style of Eye, is what changes the plot. The accomplished duo’s groundbreaking work as GALANTIS destroys current electronic dance music tropes, demonstrating that emotion and musicianship can indeed coexist with what Eklöw calls “a really, really big kind of vibe.”

Earning the rare honor of debuting in a prime-time slot at Coachella, the festival of festivals, GALANTIS quickly became the talk of the town. The packed stage and thrilling live show earned the attention of Dancing Astronaut, who named the set Best Debut of the festival, while an online poll from Billboard magazine found GALANTIS shattering the competition for Best Dance Music Moment at Coachella.

“GALANTIS is about challenging, not following,” says Karlsson.

Karlsson should know about shaking things up. As half of production duo Bloodshy & Avant, he reinvented pop divas like Madonna, Britney Spears and Kylie Minogue in the early 2000s. He cowrote and produced Spears’ stunning, career-­changing single “Toxic” to the tune of a 2005 Grammy Award for Best Dance Recording. Since then, he’s been breaking more ground as one-third of mysterious, jackalope‐branded band Miike Snow. The trio’s two albums, 2009’s self-­titled debut and 2011’s Happy To You, fuse the warm pulse of dance music with inspired songcraft, spanning rock, indie, pop and soul. And they recreated that special synthesis live, playing over 300 shows, including big stages like Coachella, Lollapalooza and Ultra Music Festival.

As Style of Eye, Eklöw has cut his own path through the wilds of electronic music for the last decade, defying genre and releasing work on a diverse swath of labels including of-the-moment EDM purveyors like Fool’s Gold, OWSLA and Refune; and underground stalwarts like Classic, DIRTYBIRD and Pickadoll. He also co-wrote and -­produced a little song you might have heard: Icona Pop’s international No. 1 smash “I Love It.”

After mutually admiring each other from afar, Karlsson and Eklöw kept meeting by chance at Robotberget studio in Stockholm, home to Karlsson’s label of the same name, and soon discovered shared creative values and complementary goals. Karlsson wanted to go deeper into electronic music; Eklöw wanted to apply songwriting to his track-­making prowess.

And both wanted to give the finished product, whatever it was, a live life—an audiovisual experience that matched the really, really big vibe of the music.

After several remote track swaps between the usual planes, trains and automobiles yielded nothing worth keeping, the pair decided to try to change their work by changing its setting. So they set up a studio in one of the world’s most stunning natural phenomena, the Stockholm archipelago in the Baltic Sea. This fantastical 37-mile belt has inspired Swedish artists, playwrights and poets throughout time. It’s on one of its over 65,000 individual islands where GALANTIS became real.

“It’s strange making electronic music in a place like this,” says Karlsson. We are on a tiny, isolated island surrounded by water, but it inspired us to go where we wanted to go.”

That sense of simultaneous smallness and grandeur made its way into “Smile,” a soulful song in the cloak of a festival anthem, with dusky keys adding depth to the energetic builds. And it was then that Karlsson and Eklöw knew they had it: the sound of GALANTIS.

Following its release, “Smile” became a dancefloor staple internationally. The track was championed by a wide array of GALANTIS’ peers, including Pete Tong, who made it an Essential New Tune; Diplo, who called it the best house tune of the year; and Laidback Luke, who tweeted, “Galantis is light years ahead of us.”

“You,” their follow-­up single, received an ecstatic response, with Kaskade and Steve Angello supporting it in their mainstage sets at the Ultra Music Festival, where it was also one of the 10 most­‐Shazamed songs. Legendary DJ Tiësto and his protégés Twoloud were the first to remix the track, while Porter Robinson showed support on social media.

The accompanying video brought the Seafox, the creature that serves as GALANTIS’ logo, to life, spending a night on the town with friends and talking about her search for love to underscore the message that “Love is love, no matter who you are.”

Releasing a song a week in advance of their debut self­‐titled EP, it took only days for the tracks to cross 100,000 plays. The EP went on to #4 on the iTunes dance chart upon its release.